No serious scholar of religion can write authoritatively on Naga Baptists without grasping the nuances of nineteenth century Evangelicalism and twentieth-century Pentecostalism. 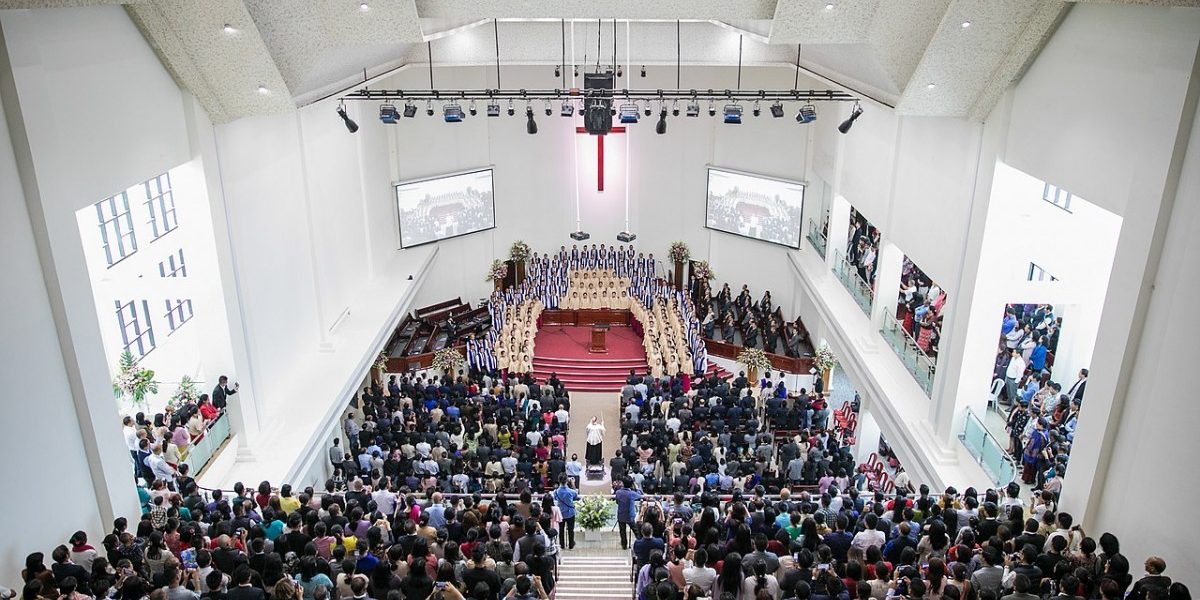 Excerpted with permission from Christianity and Politics in Tribal India: Baptist Missionaries and Naga Nationalism by G. Kanato Chophy, published by Permanent Black.

On Easter Sunday 2010, a group of Naga Christians assembled at sunrise near a famous World War II monument in Kohima, capital of the state of Nagaland in north-east India. It appears that the faithful had chosen this spot since the stone-sculpted structure has at its apex a stately crucifix.

The WWII memorial, where an interdenominational “sunrise service” is held on this day every year, is a stark reminder of the ruthless modern warfare that ravaged this once-remote place inhabited by an obscure head-hunting tribe best known for its grisly “trophy collection”. The spot is usually pummelled by strong winds at this time of year, and 2010 was no exception, but they seemed only to spur the congregation into a more determined show of devotion on that early morning. Around them was complete silence, except for tall pines that rustled in the wind. Enhancing the melancholy of the scene were hundreds of small white marble tombstones that stretched across an immaculately trimmed lawn, their engravings showing mainly alien names.

On a hillside overlooking the Kohima War Cemetery spreads the expanse of Kohima town. The narrow and winding roads of Kohima – which has a population of 1.15 lakhs according to the 2011 census – are always flooded with people, its busy streets clogged with endless traffic jams. Sundays are the exception, for the Sabbath is when the entire town comes to a halt and the many churches in the state capital come to be packed with worshippers.

The day after, life bursts forth in the heart of town, and a flurry of Nagamese – the lingua franca of the streets and commercial transactions – flows unimpeded again. Through the snail-paced traffic, people throng the streets once more to continue everyday tasks interrupted by the day of rest.

But at this moment in the Kohima War Cemetery everything seemed calm and serene, as the gathered believers waited for the sun to rise above the lofty mountain range that dominates the sleeping town. The congregation consisted of a few hundred, young and old, all dressed for the occasion, some in the latest fashions of the town, others in traditional garb. Now, as the sun’s soft rays began to light up the surrounding grass, the crowd sang out exuberantly and in unison – “Up from the grave He arose”; the words were from an old Baptist English hymnal. An elderly Naga gentleman, whose erudition and confidence bespoke decades in the business, led the congregation in worship as intermittent applause, cacophonous prayers, and melodious hymns resonated from this piece of hillside.

The significance of the cemetery as a symbol of the clash of civilisations and the collapse of empires seemed lost on the devotees; the attention of each of those gathered was keenly focused on a Palestinian-Jewish prophet from two thousand years earlier whose teachings had changed their world. From being seen as “much dreaded” tribes during the British Raj to becoming a pietistic community of Christians at the opening of a new millennium in the Indian republic, their transition, over the span of a mere century, had been uncommonly swift.

Baptists are Protestant Christians who practise the complete water immersion of believing adults, this being distinct from the baptism of infants as practised by Protestant denominations such as Anglicans, Brethren, and Lutherans. Tracing their roots to the English Separatist movement in the 1600s, the Baptists are discernible as a denomination by their specific beliefs and practices: the accountability of the individual; the autonomy of local churches; communion; sola scriptura (scripture as the sole authority for faith and practice); and sola fide (salvation by faith alone).

Baptists are of various shades and their beliefs have fostered an impressive array of perspectives. The American journalist and award-winning writer Robert Wright begins his book The Evolution of God by mentioning his Southern Baptist upbringing, and how he outgrew his Baptist roots, when introducing his position as lying between science and faith. The Baptist stance on science and faith has gained for its followers the opprobrium of religious fundamentalism, at least in the Bible Belt of the United States. Yet I have come across individual Baptists who are devout while accepting the Darwinian theory. Their reconciliation of the contradiction takes the shape of a supplementary belief – that natural selection shows selection by the Divine Hand. More common, however, are the established denominational orthodoxies that have made Baptists controversial in an increasingly globalised world.

“What distinguishes a Naga Baptist?” I put this ostensibly simple question to Zelhou Keyho, General Secretary of the Nagaland Baptist Church Council (NBCC), one of the foremost Baptist organisations in India. With a PhD on the Old Testament from the US, Zelhou taught in a popular Baptist seminary in Dimapur for several years before being selected to head the parent Naga Baptist organisation in 2015. According to this charming leader of the NBCC, Naga Baptists can be distinguished by their “belief in being born-again, taking the Bible to be the divinely inspired word of God, evangelical faith and adult baptism – a water immersion ritual that is afforded only after a person can discern between good and evil and decides to follow Jesus Christ.”

Zelhou’s mild version of what makes the Naga Baptist distinctive omits the fact that some Naga Baptist beliefs can be very unpopular, even unpalatable, in a multicultural society. For instance, many Naga Baptists believe in a literal interpretation of the scriptures, the eternal damnation of unbelievers, and that salvation comes exclusively through Jesus Christ and his atonement on the cross. However, Naga Baptists mostly occupy a spectrum less extreme, showing adherence to doctrines that are not different from the fundamental southern Baptist churches in the United States at one end, and an uber-Pentecostal variety of faith at the other.

One feature that all Naga Baptist churches share is zeal for evangelism and mission, which I think has not waned since the last American Baptist missionaries left the Naga Hills in the mid-1950s; rather, the sense of mission has not yet peaked, for the inevitable decline, clearly visible in the history of other Christian missions, is not yet in evidence. The Naga Baptists currently send missionaries to various states in India, and to neighbouring countries like Bhutan, Nepal, Myanmar, Thailand, Cambodia, and China. Local churches in Nagaland are self-reliant as the believers who throng them tithe religiously and give generously toward mission; most Baptist churches have a mission department which undertakes to spread the gospel to the “unreached”. In fact the success of a Baptist church is measured in terms of missionaries sent out and its sponsoring missions outside the home state. As the general secretary of the NBCC puts it, “the heartbeat of the Naga Baptist churches is mission and evangelism.”

I was raised in a conservative Baptist home, so I am familiar with Naga Christian denominational idiosyncrasies and legalistic beliefs, and familiarity tends to naturalise what can seem an oddity to those far removed from contexts they see as alien. The images people in the world outside hold of Naga Baptists are often caricatures, much as are views of Baptists in general in the West. On a visit to the United States, the country to which the Naga Baptists trace their denominational origins, I encountered so-called secularists making sweeping generalisations about an entire religious community. Frequently, friends and acquaintances in the West raise eyebrows or cringe when they hear that I am a practising Baptist. It is small mercy that they do not see me as the Third World version of a gun-toting Young Earth creationist or a Bible-thumping churchgoing fanatic – that being the usual image of Baptists in popular culture.

Baptists, despite a shared history and doctrinal origins, have diversified over the centuries as waves of Christian movements across the world have changed the contours of the faith. Similarly, Baptist denominations among ethnic Naga groups are not monolithic. In my opinion, no serious scholar of religion can write authoritatively on Naga Baptists without grasping the nuances of nineteenth century Evangelicalism and twentieth-century Pentecostalism, both of which have had a huge influence on the religious life of ethnic Nagas. These global religious movements have fostered schismatic divisions within the Baptist denomination and have engendered a wide range of beliefs and practices. Also, some aspects of indigenous religious beliefs and practices have continued in the new faith, rendering a distinctive character to the Baptist tradition among the Naga tribes.

G. Kanato Chophy is an independent researcher and writer from Nagaland.