An Insightful Reading of Our Many Indian Identities

How does this film look when placed in the context of the nation, is the subject of this new academic study 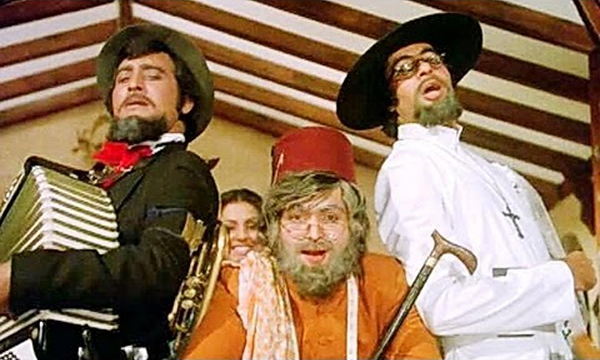 A still from the film Amar Akbar Anthony

Is it possible to imagine about the 1977 blockbuster opus Manmohan Desai’s Amar, Akbar, Anthony (AAA) that Akbar — played by Rishi Kapoor — is the actual hero of the film? Or for that matter, it is none of the three male stars but Ma (Nirupa Roy) is the real ‘hero’? After all, wasn’t AAA the film that broke the media-hyped impasse between the rising stars Amitabh Bachchan and Vinod Khanna and establish once and for all the former as the unchallenged superstar of Bombay cinema?

But with the appearance of William Elison, Christian Novetzke and Andy Rotman’s excellent 300 page plus study of the film it becomes possible to do so and most believably so. Which also means what we have in our hands is a book that is as daring and inventive, as zany and counterintuitive as the film itself that it is about. If one of the prime pleasures of the Desai film was its absolutely no-holds barred trip through the gullis of Bollywood masala cinema, then the book lives up to that spirit of adventurous derring-do.

Yet just as the film, despite its steadfast dedication to sheer hokum, manages to make us believe that it is rooted in solid knowledge of cultural realities of Indic lives and has something serious to say about the communal relationship between religions in modern India, the book too roots its playful speculative swing in robust interpretations of the film through first-rate scholarship in Indic religions. The web of erudition is woven through with a light touch making it a book for one and all, lay and specialist alike. So what’s the book all about? Without giving much away, it’s about the way in which a film about three-brothers-lost-and-then-found made around 1977 managed to provide us with a glimpse of a new India emerging from the debris of an older one riven with communal and political strife. The film, the authors claim, has to be read against the ambiguous moment of the Emergency where an older, much-valorised nationalist political ethos gave way to a newer, younger one. The coming together of the brothers and the family out of a miasma of crime and economic dereliction is also the emergence of a new Hindustan out of its troubled/divided pasts. One of the interesting ways in which such a change is tracked is the play within the film between locations in ‘old Bombay’ (mainly Bandra) and the emerging suburbs around Borivali. Such a reading seems particularly felicitous given the manner in which cascades of northern suburbs of the city rose into economic and cultural prominence in the post-emergency era all the way to becoming the dynamo for Mumbai Global of the 1990s and 2000s.

At one point in the book the authors muse whether AAA is the first masala or indeed the first postmodern film in Bombay film history (the first claim is dubious–my vote goes to Yaadon ki Baaraat; and the second is not exactly an original one). One could equally speculate whether AAA was the first Bollywood or global film in the annals of Bombay cinema.

Following the introduction, the story of the film is told by the authors three times over, each writer telling the tale on behalf of one of the brothers in order to convince the reader that the brother whose case is being taken up by the particular writer is the hero of the tale. And then they add an unlikely layer by each taking turns at positing Ma, the mother of AAA, as the hero of the film, producing three divergent readings of the figure of the mother. The stories of brothers plus Ma are in the main told by framing them as playing out heroic attributes as per the religious domains they belong to, something not surprising for a film that is explicitly named in religious terms.

Trimurti then, to keep to the religious symbolism that marks the book. As in the brahmanical scheme of things, all of Indic experience can be read being as under the signage of Brahma or Vishnu or Shiva and so can AAA be read as belonging to Amar or Akbar or Anthony. Plus Mummy of course, who is always the winner in Bombay cinema. No problem here for Indic pantheon-making: the mother goddess and her Shakta votaries claim the universe for themselves too.

Prisms then all over, as in the film so in the book, refracting a singular scenario to now reveal Amar and a Hindu(tva) India, then Akbar and an Islamicate Bharat, then again Anthony’s Christian Hindustan, and further again mother Shakti as Bharatmata. Each hero leads his/her religion to define India completely in his/her own terms.

Not only is AAA playful about communal harmony and unity in diversity, it is spot on about the bewilderment all of us face, lay and academe alike, when we are confronted with the Indian everyday–it all looks majoritarian in some sense in Hindu (political), Muslim (cultural), Christian (linguistic), Maternal (psychological) ways while being all of these things mixed up and more. And it is here that the bits of the book that are counterintuitive and worked the best for me. In a film over which Bachchan’s stature looms so large, it is a treat to follow Akbar as hero of the film in his mastery of miracles/revelations of the essential truths of life, a power revealed most forcefully when he sings (Akbar has the maximum solo songs in AAA). The hero-Ma presented as possessed by a rustic boundary goddess moving from the peripheries of territory and gender to take her place at the centre of the Indic modern reads like a cracker of an existential thriller.

Our divided selves as Indians

Ultimately the book is about how AAA is about our divided selves as Indians and although this might worry cultural nationalists, the authors claim that there are pleasures to be had in such belonging to many things at once. For one, it allows us to come to terms with difficult realities-if the ‘Semite’ (Islamic or Christian) bit within us considers a mother who abandons us at birth as a bad mother then considering her as a divinely possessed being establishing a just world for herself and her kids might help us see her in a positive light. Or if high religions are at war, then a Sai Baba who contains within him the Sufi, Shaiva and the Shakta might provide us a folk syncretistic alternative to religious intolerance.

And of course, Anthony the synthesizer of all contradictions: happy to be a bootlegging caste-convert, devout Christian and brother to a Hindu and a Muslim. The authors end by saying that the anhonee the brothers sing about in the last song of the film is not so much about them coming together across religious divides to best the enemies of the nation as about them exhorting the audience of the film to make this coming together possible in real life. I agree with what the writers’ trio has to say about the song, and while such a thing is easier said than done, for starters I would recommend readers of the book to relive the pleasures of the film seen through the pleasures of the text being read, much of which is about discovering how playfully things are mixed up in matters cultural and religious in India and where everybody rules the world.

Kaushik Bhaumik is Associate Professor at the School of Arts and Aesthetics, JNU