Why Microfinance is Becoming a Bad Word All Over Again

Inadequate regulation coupled with the increasing tendency for women to borrow money for consumption rather than income generation is leading to mounting indebtedness in eastern UP and Bihar, and even suicides. 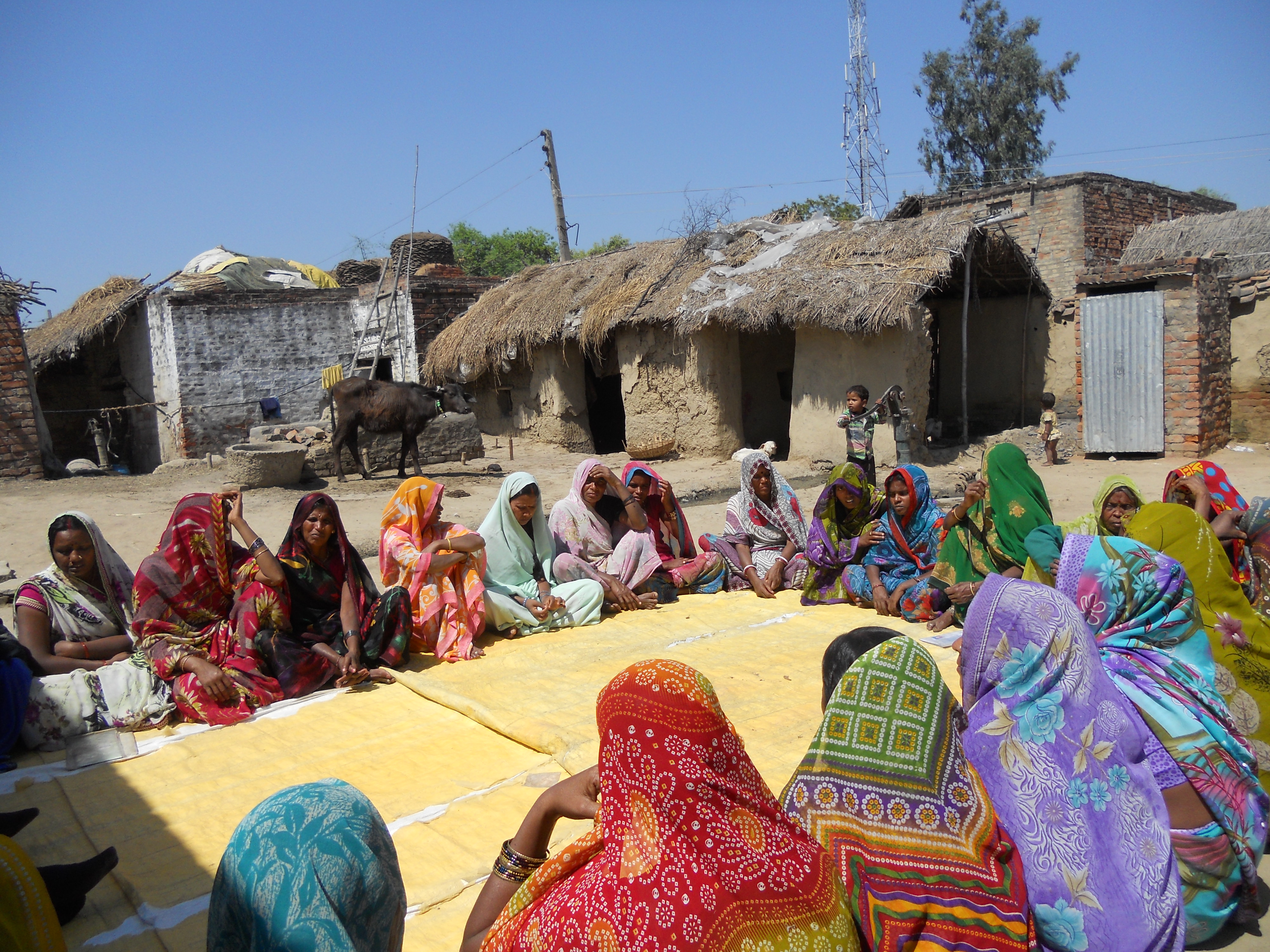 Varanasi: Just when everyone thought the microfinance industry – which almost collapsed after the Andhra Pradesh crisis in 2010, when more than 60 persons committed suicide due to indebtedness – is resurgent and poised to touch new heights in lending to the poor, the spectre of another crisis looms on the horizon.

In June 2015, two women, Namita and Sita, committed suicide in Purshottampur village some 80 kilometres south of Varanasi after taking micro loans from as many as seven micro finance institutions (MFIs), from the scores that throng the UP and Bihar countryside. Holding a clutch of passbooks which they later found from her hut, Namita’s son Amrit Tiwari says, “We had no idea that she was so heavily indebted. And, we did not even see the money because my mother and Sita (both neighbours) actually took the loans for Priyanka who gave them just Rs 1000 as commission for each loan.” There is a web of such credit pipelines in the village where loans taken by one are serviced by another, who in turn has collected a cache of money by persuading several women to become ghost loanees for her.

In Atraulia, also in the same district of Azamgarh, Gudi has left the village with the money (estimated to be about four lakhs) collected from several village women who took ghost loans for her. “The trend of women leaving their villages without telling anyone is on the increase. They either to go to their parental home or migrate to towns when they are unable to repay. The problem of multiple borrowing is growing by the day because each village is usually serviced by seven or eight MFIs and competition is intense”, said the manager of an MFI in Varanasi requesting anonymity.

Priyanka, incidentally, fled the village soon after the suicides in June because everyone knew that the loans for which the recovery agents of different MFIs were harassing Namita and Sita were actually hers. The five room brick house that she was building for herself with the money she had collected from several women (estimated to be about Rs 5 lakh) is incomplete. Villagers say that she spent some of the money for her own cancer treatment in town.

It is easy to get a micro loan in this poverty stricken belt nowadays but hard to repay. Priyanka soon began defaulting on her payments, leaving the hapless Namita and Sita to fend for themselves. The two, who were neighbours, took their lives in a suicide pact of sorts, by together consuming ‘sulphas’ – a commonly available agricultural pesticide.

The angry villagers of Purshottampur who beat up the staff of a well known MFI a day after the suicides, say that there are several more ‘Priyankas’ in their village. A few days later, the same company quietly paid Rs 25,000 each to the two families to suppress the rage building up against it and waived off their loan amount. “But we still have to repay five more loans and no one is helping us to recover the money from Priyanka” said a worried Amrit.

The mysterious disappearance of another woman, Sunita, and her husband – who had also persuaded several women to take loans from MFIs on their behalf – is the other talking point in Purshottampur. Some of the top MFIs of the country are among those who lent to Namita and Sita and at least one of them has recently received approval for a small finance bank licence from the Reserve Bank of India.

Purshottampur also has a home grown MFI run by local political mafia. It lends at over 60% interest and does not follow RBI regulations.

The Andhra Pradesh microfinance crisis was caused due to unregulated lending to the poor, where multiple companies often lent to the same borrower. Post that bust, the industry is better regulated and in December 2011, the RBI put in place regulations which have capped the margins between cost of borrowing and lending, interest rates and purposes and size of loan.

In April, the RBI, under pressure from the MFI industry to relax the controls, increased the limit of total indebtedness of a borrower from Rs 50,000 to Rs one lakh. This move – made because the RBI found significant “improvement in the microfinance sector” – enables MFIs to lend to clients with more liabilities now. Ironically, Purshottampur’s suicides happened in June, just two months after the new RBI rules kicked in.

But the poor borrow from different sources and credit bureau reports are not fool proof.  Says Ratna Vishwanathan CEO of the Microfinance Institutions Network (MFIN), an RBI-recognised self regulatory body which regulates NBFCs/MFIs to ensure responsible lending and client protection, “What does an MFI do if clients manipulate the KYC requirement to obfuscate their history of multiple borrowing? The lender is not always the villain. The women have learnt to fool the credit bureaus.”

In Vasanthpur near Chandauli, for instance, Kamli and her husband took loans from five MFIs by manipulating the KYC requirement and when they could not repay, they disappeared from the village. This led other women in the village to stop repaying the MFIs who are lending here and most days in Vasanthpur, loan recovery agents can be seen outside one house or the other. The underbelly of the microcredit boom playing out all over again in village after village in this belt.

The MFIN is supposed to report incidents like the Purshottampur suicides in its quarterly report to the RBI, but claims they have not been brought to its notice so far. Atleast three of the MFIs who gave loans to the two victims are members of MFIN. Says Ratna, “We have reported several cases of attempted suicide in recent months, but no actual suicide has come to our notice. If we get a report, we will do a fact-finding enquiry and take appropriate action. But it is difficult to link MFIs to a suicide because the reasons can be more complex and requires a nuanced approach. Social humiliation and peer pressure from the other group members play a bigger role than the recovery agents.”

The AP government had reacted to the rash of suicides by promulgating the tough Microfinance Institutions (Regulation of Money Lending) Act, 2010 to stop harassment of borrowers in the state through coercive loan recovery practices. It banned MFIs from approaching the doorsteps of their customers, lengthened the loan recollection cycle from one week to one month and made it mandatory for lenders to get government approval to give a second loan to the same borrower. This led to a drop in repayment from 99% to 20% and most MFIs shut shop and moved out of the state. Today eastern UP, Bihar, Madhya Pradesh and Bengal are the fastest growing markets for MFIs. But this has also been a period of high growth for the industry and there is great pressure to expand business at all cost in order to keep the private equity investors happy.

While NBFC-MFIs who do 90% of the lending, are currently regulated by the RBI, MFIs registered under various state society acts are not regulated by anyone. The RBI has suggested that the non-corporate MFIs should be regulated by individual state governments for which a model law could be passed in parliament. In 2012, the Centre introduced the ambitious Microfinance Institutions (Development and Regulation) Bill 2012 , envisaged as an overarching legislative framework to take MFIs outside the purview of draconian state legislations like the AP act. The Bill lapsed last year and a new version is still on the anvil.

The microfinance model pioneered by Nobel laureate Mohammed Yunus in the 1970s with Grameen Bank in Bangladesh was aimed at poverty reduction. He worked out that if you lend to poor women they will use the money to earn more for themselves and almost always pay it back, to keep the credit line open. They still pay it back because repayment in microfinance is an astounding 99%, though utilisation is skewed.

Meera is one of the wiser women in Purshottampur, who has stopped taking loans from MFIs after she found it difficult to repay a Rs 30,000 loan that she took two years ago. She explains: “MFIs give us loans for income generation but most often the money is spent elsewhere. I had taken the loan to buy a cow, but showed the company officials my old cow, when they came to check the loan utilisation. I used the money for my daughter’s marriage instead and faulted on paying instalments several times. This is what most women around here do.” Pooja in Sikandarpur tells me that one of the first things women do on getting a loan is buy a television set. “When loan officials come asking, we tell them that either it is a gift from our parents and some say that the daughter in law brought it in her dowry!”

Ratna admits that they know most loans are not being used for income generation and diverted for consumption. “But you also have to see that the poor do not have a choice. Who will give them unsecured loans for consumption, which in our society is huge with our expensive social obligations like marriages and mundan ceremonies, or medical expenses? If the MFIs were not there, they would be at the mercy of the exploitative money lender.” Most MFIs give loans at interests ranging from 19.5 to 24%. The RBI since last year has allowed large MFIs a margin of 10% over and above the cost of funds.

Quite clearly, for most MFIs/NBFCs, lending to the poor now is not so much about poverty reduction or nurturing grass roots entrepreneurship, but unrestrained consumer lending – a fact conveniently ignored by them and even by some of the not-for-profit MFIs, as long as the repayment is near perfect. It is the elephant in the room that no one wants to acknowledge. Significantly, even studies done after the AP crisis noted that anecdotal success stories of MFIs usually hid the fact that 70% of microfinance was simply consumer lending. “This is not the micro credit I have created. Microfinance is abused and distorted, ” Yunus had said after the AP deaths. Act Two of that painful story is beginning to roll out now in another part of the country – eastern UP, Bihar and Madhya Pradesh.

More importantly, at a time when the medium of microfinance is seen as a key component in the larger goal of financial inclusion, another crisis like the one in 2010 will hit the government’s long term economic plans. Five years after the AP microcredit meltdown, the country still does not have a law to regulate MFIs. The RBI is unable to monitor the sector on its own and the lack of adequate regulatory oversight is beginning to show in incidents like the suicides of Purshottampur. The warning lights are turning red but the in the race to grow and expand, there is no room to pause or reflect.