The bank had charged an extra interest of at least Rs 64 lakh on the Kisan Credit Card loans.

Nathu Ram, a farmer in Ramgarh hasn't yet received the excess amount that he was charged by SBI. Photo: Shruti Jain

Bhadra, Hanumangarh: The State Bank of India (SBI), largest public sector bank in the country, has allegedly over-charged interest on crop loans from farmers in Rajasthan.

As per the interest reversal entries in the pass-books of approximately 500 farmers accessed by The Wire, the Ramgarh branch of the SBI in Rajasthan’s Hanumangarh district charged an extra interest of about Rs 64 lakh on the Kisan Credit Card (KCC) loans. However, this is not the final figure as several farmers haven’t yet received the excess amount back.

The then district president of the AIKS, Balwan Poonia, highlighted the issue in the 2018 assembly elections and subsequently won the Bhadra seat in Hanumangarh on the CPI(M)’s ticket. After the election results, under pressure, the bank authorities initiated a process to reverse the interest.

“The process is continuing. All farmers haven’t yet received their money back. We believe this amount will cross at least Rs 2 crore,” Poonia told The Wire.

How was extra interest is charged?

As per the interest subvention scheme of the National Bank for Agriculture and Rural Development (NABARD), the government provides KCC loans at 7% if the credit limit of the farmer is under Rs 3 lakh. After the loan disbursement, the farmer is required to pay back the principal amount and the respective interest within a time limit of 365 days. If the farmers fulfil this condition, the government provides a 3% subsidy, or the interest rate increases with each passing day after the 365 days limit.

Dilip Bhamboo, an AIKS member in Ramgarh explained how farmers calculate whether the banks had charged them extra. “We calculate interest payable on a loan of Rs one lakh for a particular season (Kharif or Rabi). As per the calculations, the farmer is required to pay Rs 583.33 per month (7% of Rs 1,00,000 = Rs 7,000/12 months = Rs 583.33 per month) Now, we ask the farmers to multiply it with 6 months [since a season is spread over six months] and their principal amount. If he has taken a loan of Rs 2 lakh [basic unitary method], the final formula will be 583.33 *6 months *2 = Rs 6,999.96 and check whether they have paid accordingly,” Bhamboo told The Wire.

Apart from this, the farmers are also asked about the last time their account was rolled back. If it exceeds 365 days, it means the farmer hasn’t paid the interest and the interest rate that would be charged now will be as per the discretion of the bank.

Once the farmer pays back the 7% interest within the time limit, the bank is required to provide them with a 3% subsidy. But this rarely ever happens. In many cases, even when the farmers pay the interest amount back on time, the bank doesn’t renew their account in the system. They are then charged at a rate of 12% or more, as per the discretion of the bank. 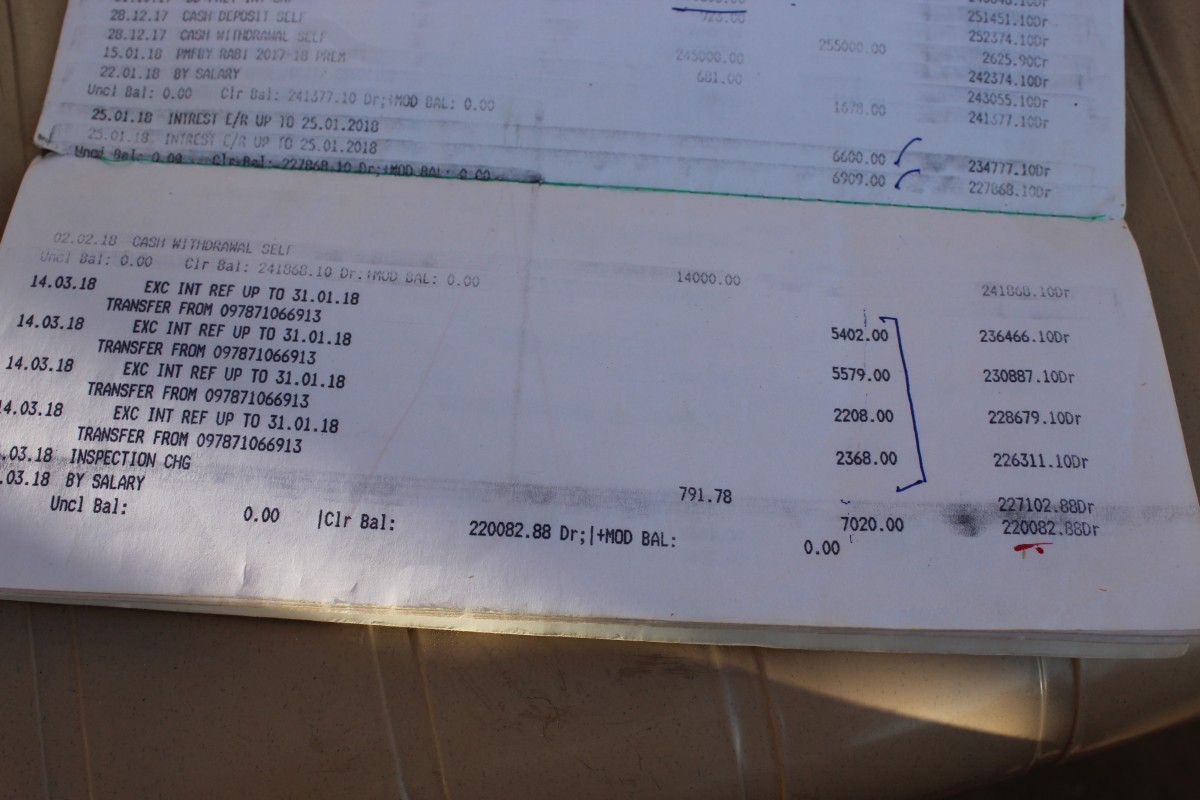 Lal Chand, a KCC-account holder in the Ramgarh SBI branch, was charged an interest of Rs 40,000. He is now credited with Rs 33,409 as “excess interest reversed” which is roughly six times more than the actual interest that should have been charged. “I took a KCC loan of Rs 1,80,000 in 2013 and paid back the interest on time. But still the bank showed that the interest is pending,” Chand told The Wire.

There are about 500 such farmers who have gotten thousands of rupees back in their accounts, but only after they agitated for over a year. “The bank says that since they have returned the money, there was no ill-intention over charging extra interest but we want to know why they initiated our payment only after we protested for months? And what is the guarantee that other branches might not be doing the same?” said Poonia.

However, the SBI has blamed technical errors in the system for the over-charge. Speaking to The Wire, R.K. Jain, chief manager of the SBI in Hanumangarh said, “Farmers were mistakenly over-charged because of some technical issues with the software. We can’t disclose the exact extra amount that was charged from the farmers but this mistake can happen anywhere.”

In this drought-prone region, farmers are dependent on scanty rainfall and poor canal irrigation systems. In such conditions, the yield is always below the expected levels and the loss is borne by the farmers. Under pressure to repay their loans, many take their own lives. Adding to their woes, rural banking institutions have also been over-charging farmers – either fraudulently or mistakenly.

A similar issue was also reported in another SBI branch of Hanumangarh. In Chhani Bari last year, farmers staged a protest at the SBI branch against the extra interest charged on their KCC loans.

Interestingly, the subvention meant to be given to the KCC holders was incorrect in hundreds of accounts in the same SBI branch and the farmers had to pay thousands of extra rupees. After protesting for 58 days, an interest of approximately Rs 16,52,000 was reversed for 350 KCC accounts. 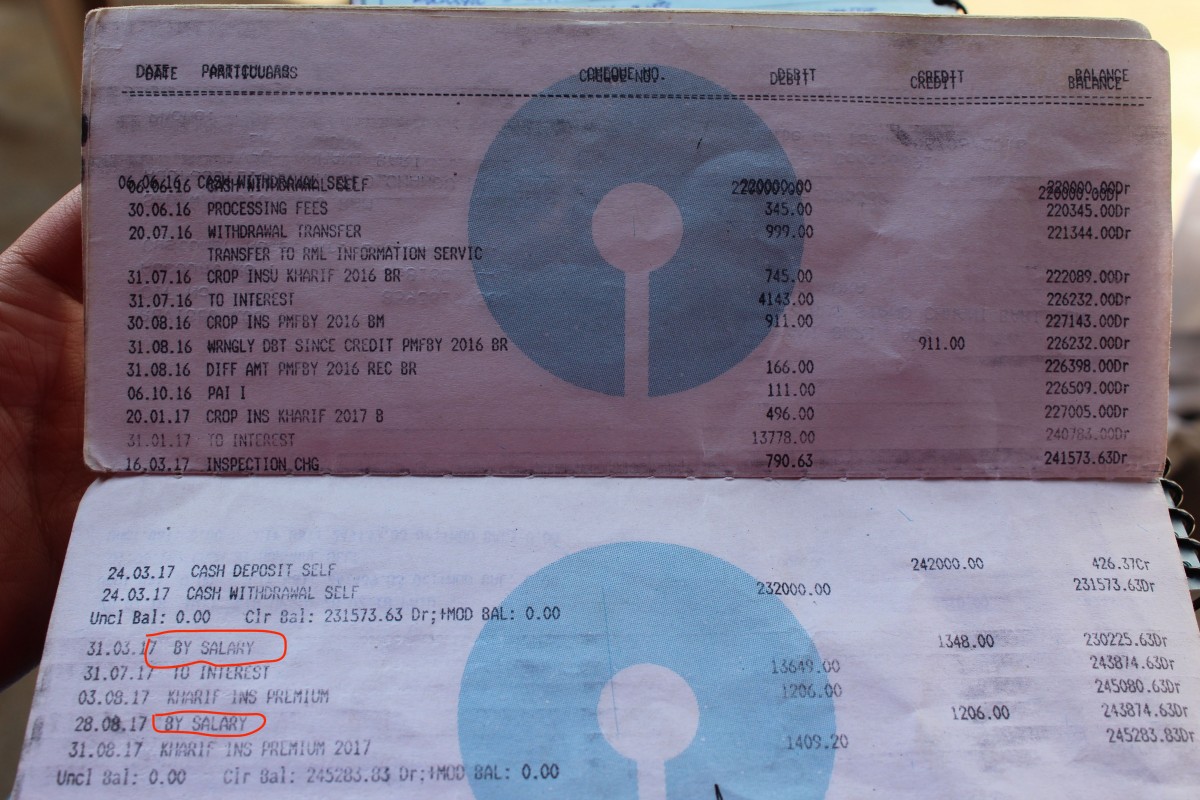 Other issues in rural banking

Apart from overcharging interest, the SBI and other banks have also deprived farmers of the benefits of the crop insurance scheme the Pradhan Mantri Fasal Bima Yojana (PMFBY)

In September 2018, approximately 3,052 KCC-holding farmers of Ramgarh Ujjalwas, Gorkhana and Bhukarka villages in Rajasthan’s Hanumangarh district were denied insurance claims under the PMFBY. The SBI had failed to credit the debited premium of farmers to the account of the insurance company – Bajaj Allianz.

The SBI’s Ramgarh Ujjalwas branch transferred the premium to the account of Agriculture Insurance Company of India (AIC) instead. When the company returned the money, the deadline for payment had already passed. The other two branches – Bhukarka and Gorkhana – on the other hand, made no attempts to pay the premium.

In April this year, approximately 135 KCC-holding farmers in Nohar tehsil of Rajasthan’s Hanumangarh district were denied insurance claims under the PMFBY for kharif 2017, apparently because Axis Bank debited insurance premiums for cotton crops – which they had not cultivated but have higher premium rates.

On the banks’ part, the delays or not attempting to pay premiums to the insurance company point at a bigger issue with the PMFBY’s guidelines on premium submission.

There could be a more sinister motive to delay the payments rather than an error on the bank’s part. Farmers say that the banks do not pay the premium before the deadline so that the insurance companies can remain free of any liability.

Insurance-related issues mostly crop up in drought-prone areas, where companies had to pay hefty claims. Hanumangarh in Rajasthan is one such drought-prone area that is entitled to crop insurance claims, particularly for the kharif season every year.