Officials assured them it's a better plan than fixed deposits and misrepresented their annual income in order to fulfil the eligibility criteria.

Udaipur, Rajasthan: Pensioners from Udaipur have registered complaints against SBI Life Insurance Company Limited for fraudulently selling them life insurance policies worth lakhs of rupees. They allege company’s officials assured them the policies work like a fixed deposit schemes but ensure higher returns, concealing payment of the premiums.

Bhopal Singh Ranawat, a retired forest guard from Gajpura village of Udaipur in his complaint letter to SBI Life in October this year narrates how the officials converted his entire savings to manage the insurance policy.

Just a month after Ranawat’s retirement benefits worth Rs 8 lakh were transferred to Udaipur’s treasury bank in August this year, the company officials approached and convinced him to invest in the ‘SBI life – Retire Smart’ plan – promising it would be more profitable than a fixed deposit (FD) scheme. 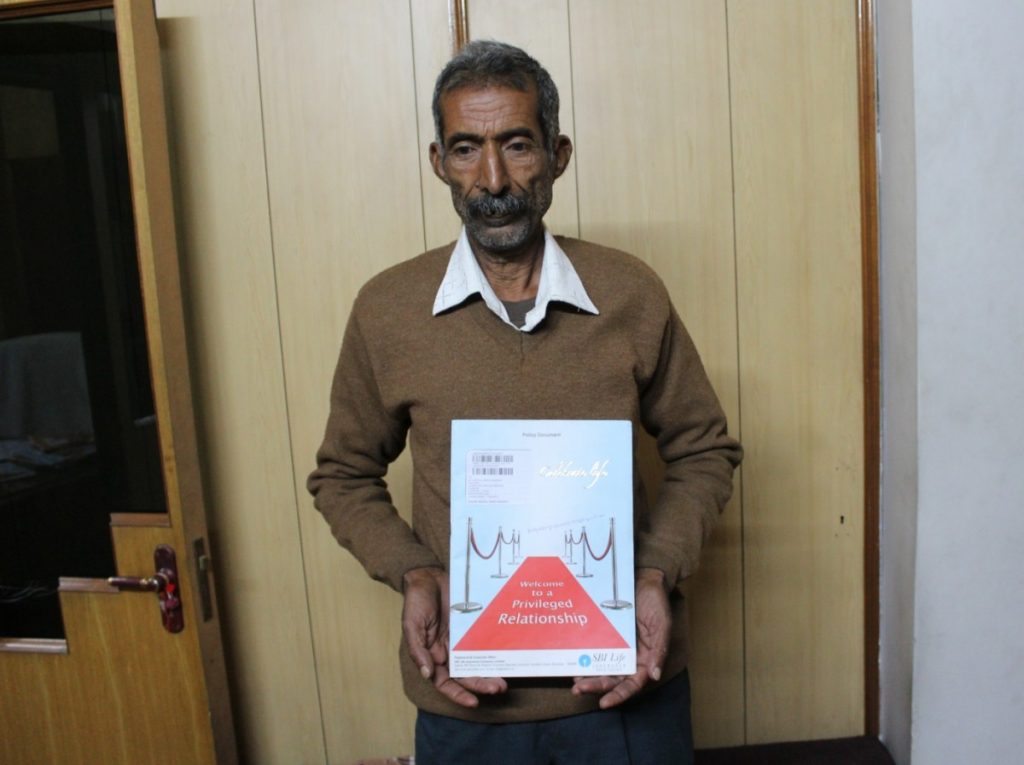 “They had repeatedly convinced me that I was investing in a better plan than a fixed deposit. Later, I found they had issued me an insurance policy worth Rs 2 lakh without informing me the details,” his complaint letter, accessed by The Wire, reads.

In an duplicitous manner, the officials also issued him three fixed deposits of the remaining Rs 6 lakh – Rs 2 lakh each – for a maturity period of one year, two years and three years respectively so that they could be used to arrange for the annual premiums.

“If a person would opt for a fixed deposit, he would put in the entire amount in one FD, not in pieces like SBI Life did without my consent. It was clearly a conspiracy to forcefully sell me the insurance policy,” Ranawat told The Wire.

In his complaint, Ranawat also mentioned that his annual income and educational qualification in the policy documents were misinterpreted so as to set them as per the guidelines laid for the eligibility of high coverage plans.

“The agent falsely presented in the policy documents that I’m a class XII pass and have basic computer knowledge, hence mentioning some email ID, while in reality, I’m just class VIII pass and don’t know how to operate a computer. Even the contact number mentioned in the policy, on which the call for policy verification is usually sent, was not my own.”

When Ranawat reached out to the manager, he misinformed him it didn’t matter if he couldn’t pay the premium amount every year, he would still be returned the interest on his investment.

On December 4, 2018, SBI Life accepted Ranawat’s complaint and decided to cancel the policy under the free-look period. However, they promised to return only the ‘appropriate amount’ that would be calculated according to the policy terms and conditions.

Responding to queries from The Wire, SBI Life wrote in an email:

“The issue [Ranawat’s complaint] was brought to our notice on November 2, 2018, three months after the policy issuance. Post an internal discussion and in line with regulatory guidelines, we approved [the] cancellation of the policy and refund of premium paid by the customer. We have written to the customer on December 4, 2018, requesting him to submit the original policy document along with essential details to process a cancellation of the said insurance policy and refund of premium.”

While the company might have noted his complaint and decided to refund the premium, there are others whose grievances remain unaddressed.

Suresh Chandra Shrimali and Pushpa Shrimali from Badgaon in Udaipur has a similar story.

After retiring from Bharat Sanchar Nigam Limited (BSNL) in 2013, Shrimali’s account was credited with Rs 9,36,447. Soon, he too was approached by SBI Life officials to purchase a traditional life insurance policy called ‘Shubh Nivesh’ – which has the provision of forfeiting the fund if the insured person fails to pay the premium amount. 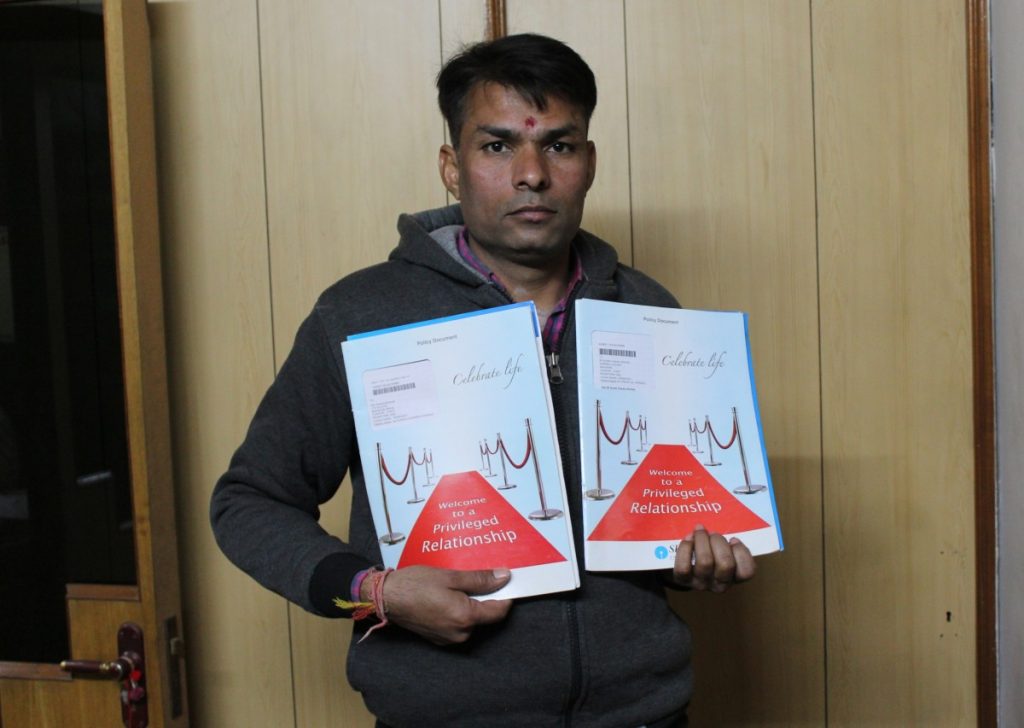 Following repeated persuasion by the officials, his wife and he agreed to buy two plan of R. 2 lakh and Rs 1 lakh respectively, with an agreement that the invested money could be withdrawn anytime. Shrimali’s complaint letter reads:

“We are not well educated because of which we could not understand the policy terms written in English. When there was some need of cash at home, I went to the bank to withdraw the deposited money but found that it was invested in a life insurance policy that required an annual premium payment of Rs. 3 lakh, falling which the entire amount could be forfeited to the bank,”

In the policy document, his annual income is incorrectly shown as Rs 4 lakh, when the only source of income is his monthly pension worth Rs 13,300. “If we were told during the issuance of the policy that we would be required to pay Rs 3 lakh annual premium, we wouldn’t have purchased this policy at all,” said Shrimali.

Despite these efforts, SBI Life has reportedly refused to accept his complaint on the grounds of not raising the objection within the free-look period. “SBI Life has fraudulently sold us the policy, they didn’t inform us the plan had a forfeiture clause and are now telling us that we didn’t raise an objection within 30 days of the issuance of the policy,” Mukesh, Shrimali’s son told The Wire.

Complaints like this are on a constant rise despite Insurance Regulatory and Development Authority of India (Registration of Corporate Agents) Regulation, 2015 that governs the conduct of  agents selling insurance policies. In August 2016, IRDAI issued a circular reiterating its seriousness over the complaints received from  policyholders on forcibly sold or mis-sold insurance policies by banks and other NBFCs.

Speaking to The Wire, Nitin Balchandani, an ex-official of ICICI bank who is closely monitoring complaints of wrongful selling of life insurance schemes explained, “The banking system today is driven by the marketing department who wants sales to go up anyhow. Taking this further, the officials are allotted ‘targets’ and constantly pressurised to achieve them in order to sustain their jobs, which usually results in mis-selling or forceful selling of  life insurance policies.”

Even to approach these ‘targets’, banks are illegally scanning the accounts of its customers. He adds:

“The banks are not supposed to look into the account details of its customers, but today it is a regular exercise in. Known as ‘Track sheet’ where a filter is set in the database of the accounts to get the desired output, say for example, a filter – ‘accounts with a balance of Rs 2 lakhs and above’ – would give out the information of such accounts that have adequate amount to pay the premium of insurance policies and the agents would approach these customers to sell the insurance policies.”

However, SBI Life says the complaints against them are minuscule. “SBI Life has a robust grievance redressal mechanism and the company’s mis-selling complains to issuance ratio for the Financial Year 2017-18 stands at 0.14%, which is one of the lowest in the industry, in spite of the largest number of policies issued in the private sector life insurance industry,” the company replied in the email.

“The ratio is low because they are not entertaining any complaints in the first place. Most of the customers come to us after the banks don’t pay attention to their complaints. What SBI Life did with Shrimali’s complaint is what they do with almost every complaint. They should answer what action was taken by them on these complaints,” said Balchandani.