The man's family claimed he had a deposit of Rs 90 lakh with the bank. 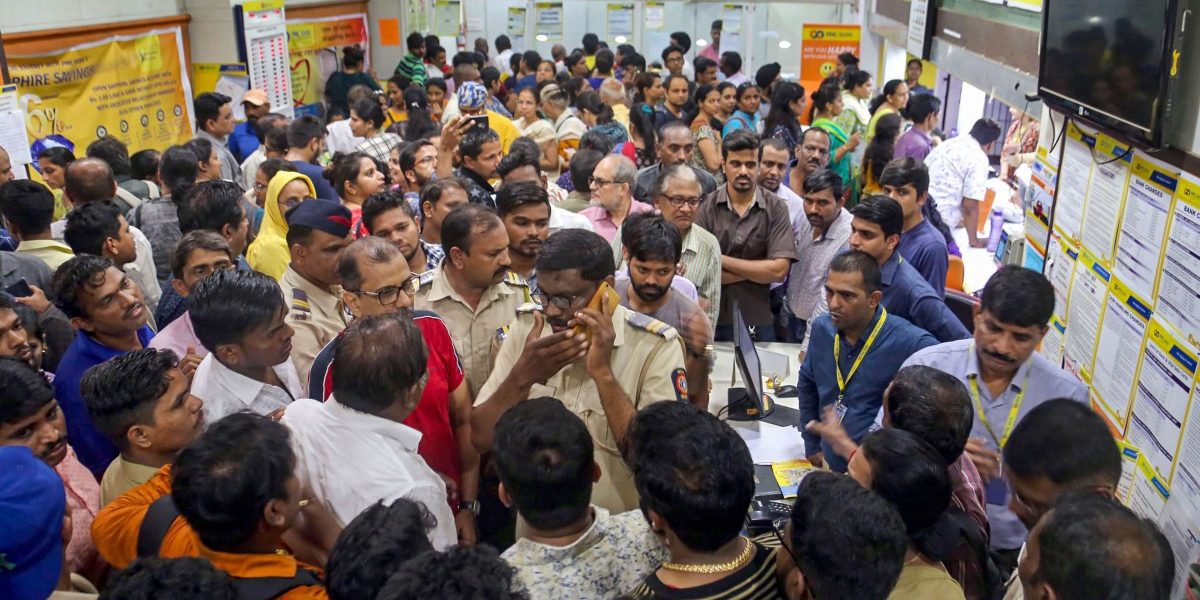 A file image of angry customers at a PMC Bank at Kolshet in Thane on September 24, 2019. Photo: PTI

Mumbai: A 51-year-old man, whose family has a deposit of over Rs 90 lakh with the troubled Punjab and Maharashtra Bank Cooperative (PMC) Bank, died due to a heart attack, sources said on Tuesday.

Sanjay Gulati, a resident of suburban Oshiwara, had gone to a protest march held outside a city court on Monday morning and had had been under stress because of his deposit being stuck, said Manali Narkar, who was among the agitating depositors.

Gulati died due to a heart attack while having dinner on Monday, a senior official at Oshiwara police station said. Narkar said a few of the depositors will be attending Gulati’s last rites to be held here around noon, and added that they will also be holding a peaceful candle light march in the evening.

According to reports by a section of the media, Gulati lost his job after the grounding of Jet Airways and is survived by a specially-abled son, who requires regular medical treatment.

The PMC Bank has been placed under “directions” by the RBI since last month, wherein depositors’ withdrawals have been capped. The limits were initially capped at Rs 1,000, and subsequently raised to Rs 10,000 and Rs 25,000 as the bank’s liquidity position improved.

The limits were increased to Rs 40,000 by the RBI on Monday to which the central bank said that 77 per cent of the customers will be able to fully withdraw their deposits with this move.

Harried depositors of the bank with deposits amounting to more than Rs 11,000 crore, have been protesting across the city. The protesters eventually also forced Finance Minister Nirmala Sitharaman to meet them last week when she was out to address a pre-election media conference here.

Sitharaman then urged RBI governor Shaktikanta Das to urgently look into the woes of the depositors, after which the deposit withdrawal limits were hiked to Rs 40,000.

Four people, including promoters of realty firm HDIL to which the bank made the sour loans, and the lender’s former chairman and ex-managing director have so far been arrested in connection with the alleged Rs 4,355 crore scam.