(Not) Direct, (No) Benefits (Cost) Transfer in Jharkhand

The Direct Benefits Transfer pilot for subsidised foodgrains in Nagri block has, ironically, led to a quantum jump in cash transactions, inconveniencing beneficiaries and dealers as also putting enormous pressure on banks, even as 25% people still remain excluded. 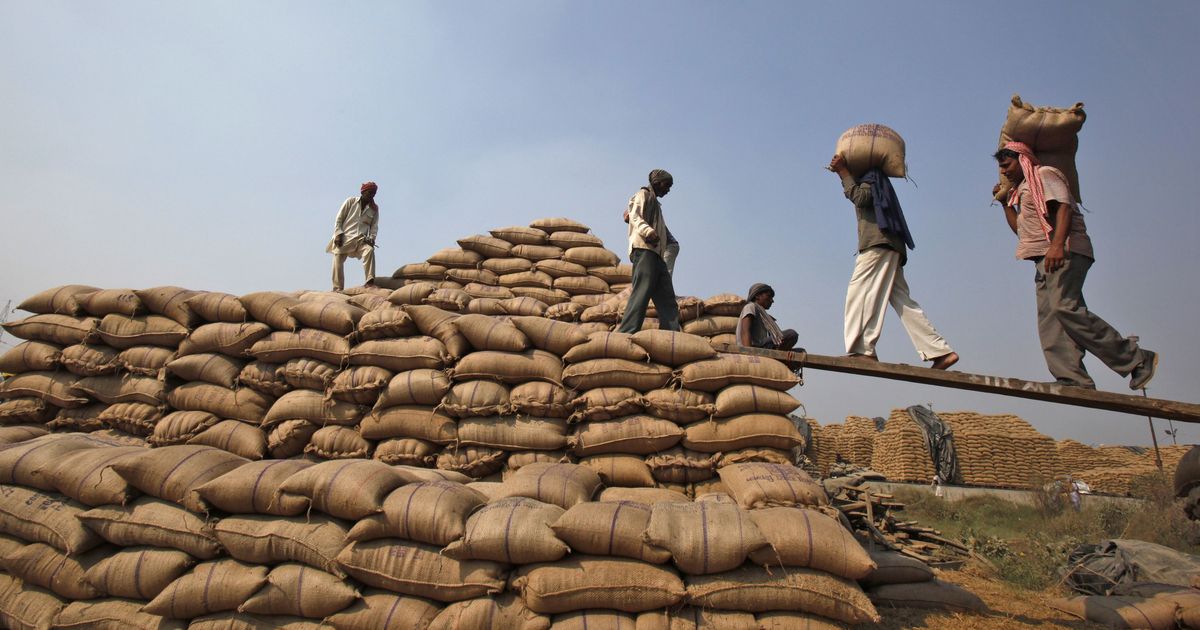 Under the earlier public distribution system, the Food and Civil Supplies Department delivered foodgrains to dealers in villages. Credit: Reuters

The introduction of any new system is bound to have some costs and benefits, but overall it is expected to be better than the system it is replacing. Alas, this doesn’t hold true for the recently implemented direct benefits transfer (DBT) pilot to convert subsidised foodgrain into cash transfer in Nagri block of Ranchi district in Jharkhand, which has clearly shown that it is an ill-suited experiment with long-term losses for citizens.

Not direct, no benefits

The flood of problems, the complete lack of preparation on the part of the administration and its refusal to think from the point of view of citizen was evident as soon as the pilot started rolling. Under the earlier public distribution system (PDS), the Food and Civil Supplies Department delivered foodgrains to dealers in villages. Thereafter, citizens bought rations from the dealer at the rate of Re 1 per kilogram, which was the dealers’ commission. Now, with the introduction of the DBT pilot, people have to follow a long-winding process to get subsidised foodgrains. First, they withdraw money from their bank accounts (cash under DBT is deposited at the rate of Rs 32.60 per kg), and then pay their dealer Rs 31.60 per kg in cash. The dealer, in turn, ends up with a large amount of cash at her disposal (on average Rs 4-5 lakh per month).

The biggest irony is that Nagri block of Ranchi district was where Mission Cashless was launched by the government in December 2017. Now, after implementation of the DBT pilot in PDS, the quantum of cash transactions has increased multifold in this block, inconveniencing beneficiaries and dealers, as also putting enormous pressure on banks and banking correspondents.

The first problem that people encountered in Nagri was that they were unaware of which account their cash was being transferred into. Since DBT uses the Aadhaar architecture, the cash transfer is made into the latest Aadhaar-seeded bank account. Given the requirements of multitude of government schemes, most citizens have ended up with multiple bank accounts. Given the enormous pressure from the government, there has been a frenzy for linking Aadhaar to bank accounts without realising that the Aadhaar can only be linked to one bank account. As a result, the last few months have seen widespread confusion with people going from one bank to another to check whether the DBT cash transfer has been credited into their accounts. This not only wasted their time but also strained the already limited resources in banks.

Even if this information gap was plugged shortly in some cases, other problems continue to dog the beneficiaries. For instance, very few people have the enabling facility on their mobile phones to receive monthly alerts on cash transfers. The rest of them have no option but to make another trip to the bank to check whether the amount has been credited. There have also been cases where the banks have not allowed people to withdraw funds, claiming that the cash transfer amount is too less for them to transact. Instead, the banks are referring the DBT beneficiaries to Pragya Kendras or banking correspondents to withdraw smaller amounts. Not only is this an inconvenience, it is illegal and against banking norms.

To top it, problems related to banking correspondents are also manifold. First, the coverage is very poor, with only about four to five banking correspondents serving the entire block. This leads to huge crowds and, therefore, high transaction costs in terms of the time taken to withdraw money. The practice of overcharging for banking services is also prevalent, with little accountability or fear of punitive action. Moreover, banking correspondents do not have the facility to update bank passbooks, which leads to further reduction of transparency in an already closed system.

On average, people in Nagri have to make three different trips to the bank before getting even close to a “direct benefit”. First, to find out which bank account is seeded to Aadhaar, next to check whether the cash transfer has been credited, and then to the banking correspondent. It is after going through all this trouble that they finally get to withdraw their cash and go to the dealer to buy their rations. 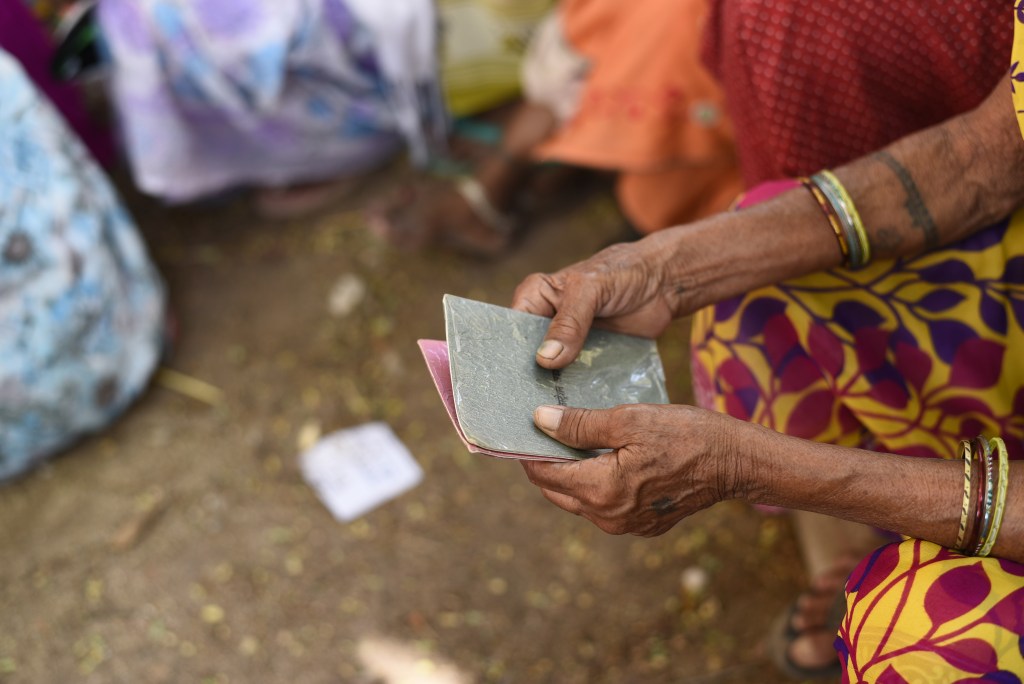 The National Food Security Act is unequivocal about the fact that it is intended to provide food security to the most vulnerable citizens of India. Instead, the DBT system is punishing the most vulnerable. Credit: Adithyan P.C./Files

Leaving behind the last person

Needless to say, these problems get worse in the case of senior citizens, the ill, physically-challenged and school-going children, for whom it is doubly difficult to physically go to the bank (multiple times) and then use their biometrics to withdraw funds from banking correspondents. Children have to skip school and the elderly have to additionally suffer. In addition, there have also been cases of confusion due to  cash transfers credited into the accounts of dead people and married daughters.

The National Food Security Act (NFSA) is unequivocal about the fact that it is intended to provide food security to the most vulnerable citizens of India. Instead, the DBT system is punishing the most vulnerable. Households with only one to two members, such as the elderly or single-women households have an entitlement of only Rs 5 kg per person. The transaction costs of going to the bank, withdrawing the money and then paying the dealer are simply too high. For such vulnerable households, the DBT system has led to greater erosion of the lifeline of that the PDS offered to them.

The ration dealers, too, are an unhappy lot, as loads of cash in hand means making repeated trips to banks. The amount of time a dealer has to spend on the entire exercise has increased from 3-4 days a month to sometimes spending an entire month in visiting banks, disbursing grain, collecting money, attending review meetings and so on. She also now has to deal with lakhs of rupees in cash, which creates a security concern both at home, and when she travels to the bank to deposit it. The crowding of banks and time taken apply here as well.

All these issues are related only to citizens who are actually getting the cash transfer. There are thousands who still are excluded from getting subsidised rations. As per the Block Development Officer (BDO), in the first week of January 2018, out of the approximately 12,000 beneficiaries in the block, around 9,000 were successfully getting the cash transfer, implying that 25% were being excluded. For this 25%, the exclusion could be due to various issues related to either the bank or the Aadhaar number. It may be noted, that none of this is the fault of the citizen. In fact, it is the primary responsibility of the Food and Civil Supplies Department to put in place an administrative system to implement the NFSA.

For those who are unable to receive cash transfer, a manual option is still available wherein the list of such people is communicated by the banks to the BDO, who informs the PDS dealer concerned. However, this process, too, is wrought with confusion with severe time-lags at every stage. Over the last few months, several citizens have been locked out of their legal entitlements to subsidised foodgrains and have had to forego their entitlement. Added to this is the perpetual threat of being “deleted” from the list. This has happened in the recent past where on the orders of the chief secretary, there was mass deletion of the names of beneficiaries who did not have Aadhaar numbers, leading to the shameful starvation deaths in Jharkhand. There is a fear that if people do not buy rations from the PDS dealer, their names will be struck off the list, even though they cannot afford to buy these at market rates without the subsidy.

Every government strives towards achieving greater efficiency in the delivery of public services, but in case of Nagri block, the output has remained the same but input costs for the citizens have mounted. In fact, all the transition costs to DBT have been borne by citizens. They are losing time and earnings through work, and have added costs as a result of making multiple trips to banks.

Based on our visits to four villages, not a single person was found to be in favour of the DBT system, or indeed voiced any benefit from it. The ills of the Aadhaar Enabled Biometric Authentication (ABBA) remain. DBT brings with it, its own set of problems. Even though DBT is following the same script as ABBA, despite evidence to the contrary, the government appears determined to push through an ill-suited technology onto some of the poorest citizens in the country.

Akash Ranjan is a social worker associated with the Right to Food Campaign, Jharkhand.