The billionaire jeweller to the world’s rich and famous has done well for himself. But along with his blinding success, his troubles grew side by side.

New Delhi: Businessmen in India’s multi-billion dollar diamond industry – it exports cut and polished diamonds worth $35 billion dollars – are known for two things: the extremely low profile they keep and the tight networks they maintain.

Even the biggest players, with offices all over the world and turnovers running into thousands of crores, remain discreet and low-key, rarely giving interviews or appearing in the press.

In this world, mainly populated by Palanpuri Jains, Nirav Modi was a stand-out. He came from a dealer background and became a retailer, not a path followed by many. What is more, he personally became the company’s brand, putting his face (and that of several glamorous celebrities from all over the world) up front.

That was not just vanity – it was part of a business strategy to emerge as a strong, international brand, on par with the Harry Winstons of the world. He wanted to set up stores in the smartest parts of international cities, and he did. In September 2016, when his eponymous store opened in Bond Street in London, it was in the presence of several top local celebs, including his British brand ambassador actor and Bond girl Rosie Huntington-Whiteley. The New York store is on 5th Avenue, and there are stores in Hong Kong and Macau. One guest at the London launch said, “it was a glittering party, and to tell you the truth, I felt proud to see an Indian name there.”

But these grand – or more appropriately, grandiose – plans required money. Lots of it. Modi appeared not to be too concerned over the last three to five years, as he opened stores, held dazzling parties (his Jodhpur bash, where clients were invited as his guests to look at and buy his new collection is still talked about) and hired top names as models, the money was never a problem. Or so it seemed.

Over a year or so ago, word was already out in business circles that Modi was facing an acute cash crunch. Six months back, the rumours escalated – that vendors were not being paid and creditors were getting impatient. Staff started to leave. (Reports have suggested that brand ambassador Priyanka Chopra is contemplating legal action because she has not received payment for her work.) Last year, his family – wife and two daughters (along with their three dogs) – left Mumbai to shift to New York. The son had already been sent to a private school in London. The word ‘bubble’ was being mentioned. To many in the close-knit diamond industry, this was not surprising at all.

Like his father, grandfather, and indeed the very diamonds he’s known for, Nirav Modi’s glittering career has taken years of careful work.

Modi’s grandfather, Keshavlal Modi, was one of the first set of merchants from Gujarat’s Palanpur who entered the diamond business in the 1920s, eventually moving to Mumbai and Singapore by the mid 1940s.

It was Keshavlal’s son, Deepak Modi who made the jump to Belgium’s Antwerp, the world’s most important industrial hub and trading centre for diamonds, in the 1960s. Today, the Palanpuri Jains of Gujarat are one of the two Indian communities that dominate the diamond trade in Antwerp.

Nirav’s own journey, however, wasn’t quite as set in stone. 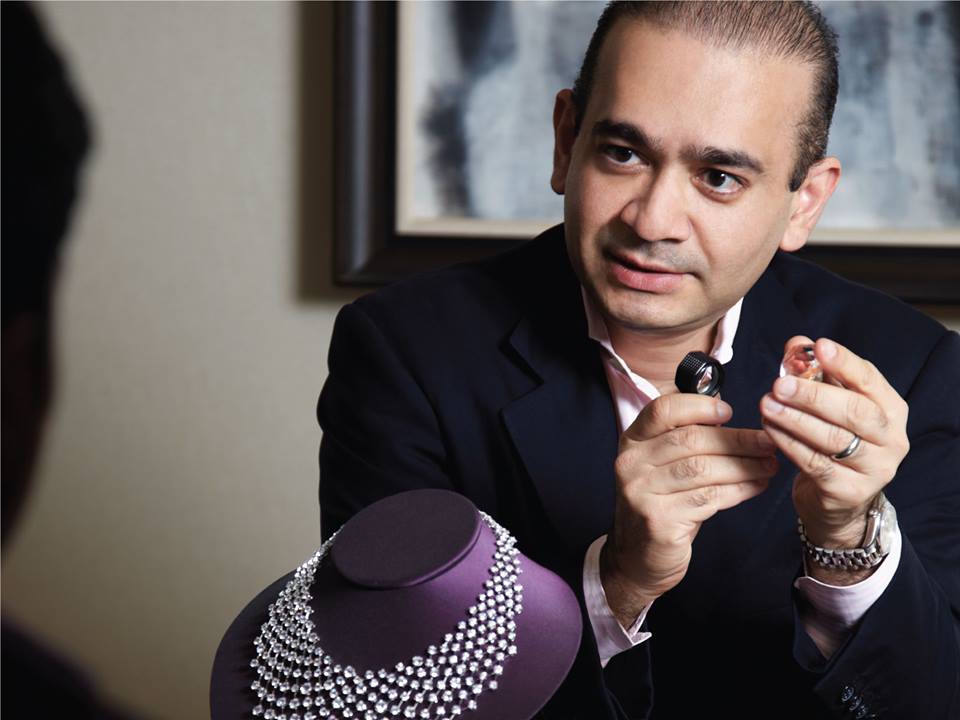 Almost every major profile of the 47-year-old diamantaire talks of how he grew up in Belgium, listening to “diamond stories” around the dinner table. And yet, undecided on whether joining the family business was a good idea, Modi headed to college at the Wharton School, University of Pennsylvania, where he curiously decided to study Japanese and finance before dropping out in a little more than a year.

It was his next steps that forged a connection that appears to have continued till today.

After leaving school, he started working with his maternal uncle Mehul Choksi, the current chairman of Gitanjali Gems, whose company at the time in the 1990s was just starting to make the switch from trading diamonds to manufacturing jewelry. As it happened, Choksi had only recently taken over Gitanjali Gems from his father in 1985 and was looking to make his own mark. The nephew not only learnt the tricks of the diamond trade but also all about jewellery branding in the new age. He claimed to have worked at Gitanjali Gems from 8 am to 8 pm, Monday to Saturday, for Rs 3,500 a month, all the while learning the ropes. Ten years later and he had the money needed to start Firestar with a little over a dozen people. The stories about how he started Firestar Diamond – whose international holding company clocked in a revenue of anywhere between $1.5 billion-$2 billion in 2016 – is dutifully repeated nearly every time for interviewers.

Eighteen or so years after Modi left Gitanjali Gems, they appear to have found themselves together in the eye of a Rs 11,000 crore scam. Both are named in the Central Bureau of Investigation’s FIR as accused although Choksi has publicly denied being associated with any of Modi’s companies.

The world’s diamond industry is roughly divided into three tiers. The higher up a company goes, the more lucrative and glitzy the business is.

The lowest level is diamond trading, mostly in rough diamonds but, in a few cases, polished as well. The next rung is third-party jewellery manufacturing and distribution – firms in this segment often produce unbranded jewellery for other major companies. The final strata is entering branded jewellery and the retail business, where companies produce artistic and intricate pieces that are sold in boutique retail outlets.

Modi made the jump from the bottom to the top in roughly 12 years. While he came from a diamond family, he credits his connections with Gitanjali as helping him more in the beginning.

Firestar started off, as most  Indian companies did during the time, by selling polished diamonds to jewellery manufacturers and wholesalers abroad. This was a natural business that developed in India as a majority of the world’s ‘diamond-cutting’ happens in the country.

The only problem was that the margins were tough and the competition even more suffocating.

CNBC’s 2016 profile of Firestar’s strategy credits him with getting into a particularly curious value-added business. Most of Modi’s clients at the time bought diamonds in assorted parcels. They would then sort the diamonds after buying them. Sorting at the time was a time-wasting and often costly affair (a few estimates placed wastage at 15%-20% of a single parcel’s volume) 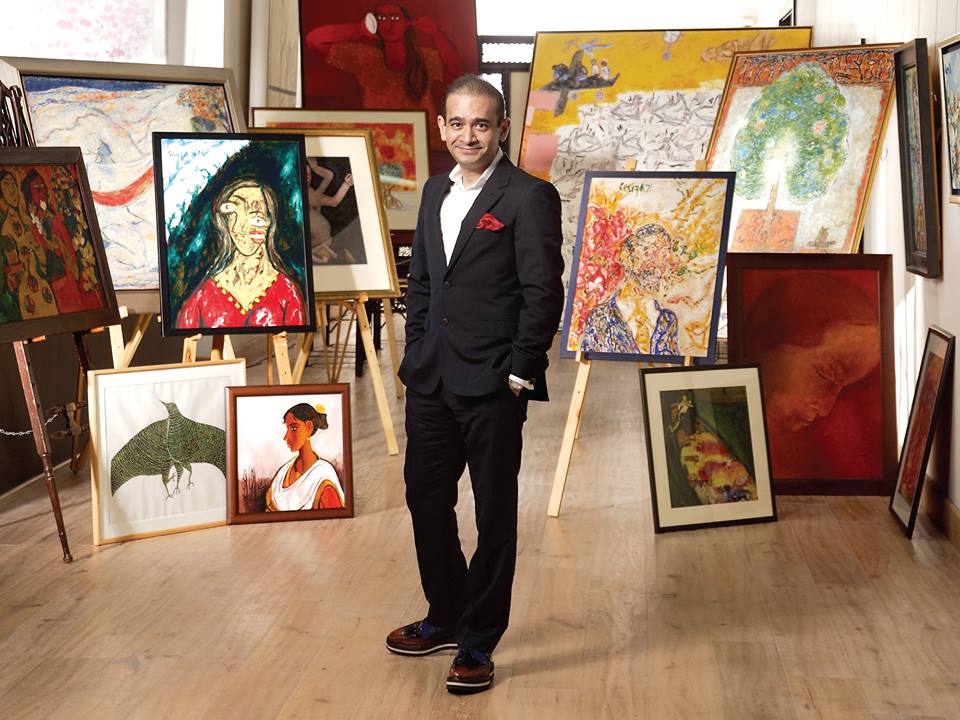 Taking a cue likely from the Indian IT business, which was also taking off at the time, Modi started doing the sorting process for his clients, a decision that paid off largely because the cost of labour in India was cheaper.

“It was not a glamorous thing, incredibly detail-oriented work, nobody was doing it, or wanted to do this,” Modi said in a 2016 interview.

Whether Modi knew it or not, he was tapping into an age-old old Gujarati diamond merchant business motto – “polish in rupees and sell in dollars”.

This eventually paid off, allowing Firestar to move higher on the ladder and start contract manufacturing for American clients who in turn would sell jewellery to retailers. His ambition, like many other Indian and Chinese companies at the time, however grew bigger. In 2005, he bought out Frederick Goldman – his biggest US client, which was also seven times the size of Firestar.

This gave him what he needed: a foot in the big league sure, but also access to the harder part of the second tier of diamond world, the retailing business. Two years after the Goldman deal, he acquired Sandberg and Sikorski, making his foray into higher-end jewelry retail.

Almost every mainstream business media house gives him credit for acting bold during the 2008 global economic meltdown. While others in the luxury business shrank, he went on a buying spree. Factories and offices around the world, supply pipelines into Russian diamond-makers – nothing was too big.

Modi’s entry in the haute world of jewellery designing comes with another myth, almost border-line cliche. As the story goes, a friend begged him for months to design a pair of earrings for her. When he did, his friend “simply loved them”. This, apparently, is when the penny dropped and Modi realised he could go from being a diamond-middleman to a person who creates intricate pieces of jewellery.

Like so many other things he did, Modi was successful there too. Today he runs a network of 26 subsidiaries and retail stores across at least 10 countries. His India-based subsidiary clocked a turnover of nearly Rs 2,000 crore for the year ended March 2016, with a net profit of Rs 72 crore. His personal financial wealth, according to Forbes, is around $1.6 billion (or a little over Rs 11,000 crore, which is curiously the amount that Punjab National Bank appears to be missing).

The billionaire jeweller, toiling away in creative pursuit, to the world’s rich and famous has done well for himself. In 2013-14, he made the Forbes world’s billionaires list –  ranking 1,067 globally and 46 in India in 2016.

Along with stardom, however, his troubles have also multiplied. In late 2015, it was reported that he was being investigated by the customs department’s directorate of revenue intelligence (DRI) for the “alleged diversion of imported, duty-free, cut and polished diamonds and pearls to the domestic market”. Or, put simply, a violation of import-export norms. At the time, the Indian Express reported that the DRI slapped show-cause notices that raised a demand of Rs 37 crore as penalty (roughly 50% of the net profit of its India business) and Modi eventually deposited nearly Rs 48 crore as “duty demand, penalty and interest”.

But this does not slow him down; if anything, he continued to grow rapidly. The stores kept opening and there were plans for more, in Shanghai and all European capitals. His lifestyle too became more flamboyant. “Personally he is soft spoken, but he loves his Canali suits and his Bentleys. He gets picked up by a Rolls Royce in London,” says an acquaintance. In Mumbai, he became part of the truly wealthy set, sending his children to skiing holidays in Switzerland every summer. Personally, he stuck to his roots – the Jains are strict vegetarians and no meat or chicken is allowed in his office. “He weighs each investment, but will then sign a huge check for anything that promotes the brand, such as sponsoring an exclusive meal prepared by Michelin star chef Massimo Buttora,” says the acquaintance.

Even when things were becoming difficult a year or so ago, Nirav Modi’s ad campaigns continued, his hoardings kept going up all over Mumbai and plans were discussed to launch new products, new stores.

In the words of someone who got to know him socially, “he was a dreamer, but who knew how he was fulfilling those dreams?”