For Farmers in Rajasthan’s Hanumangarh, SBI's 'Loot' is a Key Election Issue

The bank has allegedly been charging extra interest, has not paid out insurance premiums, is lifting subsidies to recover debt and even charging money for mobile apps. 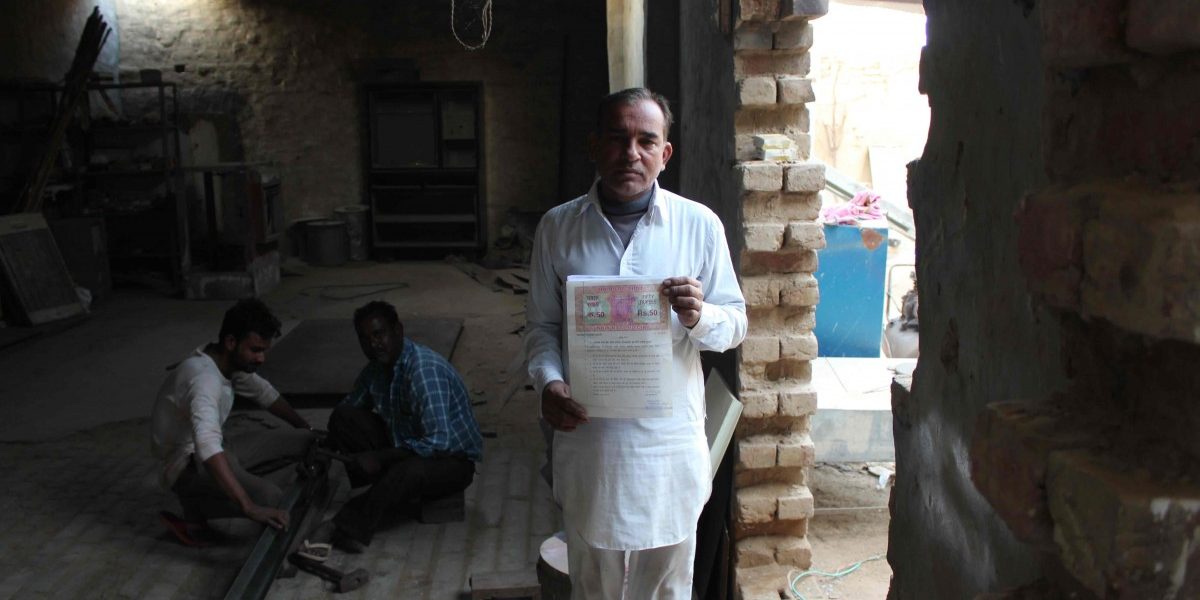 Ali Sher has been trying to get an loan since his business was badly hit by demonetisaiton. Credit: Shruti Jain

When his father was struggling to pay back the interest levied on his Kisan Credit Card (KCC) loan, Bansal, infamous in Chhani Bari for pursuing awkward jobs, quickly figured out from the passbook that the bank had charged him extra interest.

When he went to speak to the manager at the local State Bank of India (SBI) branch, he was fed a bunch of jargon that only further triggered his suspicion that something fishy was happening.

Bansal then decided to take the issue forward. He picked up discussions on KCC loans in his village to get a peek at the passbooks of other farmers.  To his surprise, the problem was not restricted to his father’s account. Many other accounts had similar irregularities.

After gathering substantial proof, Bansal took the matter to the-then collector Gyana Ram, who immediately called a meeting with bank officials to sort out the issue. The officials denied any wrongdoing but Bansal proved his point by performing basic arithmetic. He calculated the interest that should have been levied on the principal amount, which was taken as KCC loan at 4% rate of interest, forcing the bank to accept their mistake.

Soon enough, the myth that banks could do no wrong was busted. Bansal engaged the district president of the All India Kisan Sabha (AIKS), Balwan Poonia in order to get political attention to the problem, and to subsequently bring back the farmers’ money.

Their teams have been actively working in every village of Hanumangarh for the past three years. They collect passbooks from farmers, verify them for any irregularity and make a note of each such account in a register.

In February 2018, the farmers of Chhani Bari village in Hanumangarh district of Rajasthan staged a protest in front of the local SBI branch against the extra interest charged on their KCC loans. The protest was led by Poonia. After 58 days, SBI was compelled to credit Rs 16,52,000 to 350 KCC accounts. Poonia, a CPI(M) candidate who is contesting the election from Bhadra seat in Hanumangarh, has enormous public support. He is said to be leading the contest against his rivals from both the Congress and BJP. However, local dailies still indicate that it is a close fight between the two national political parties.

“After the AIKS protest, each farmer in Nohar and Bhadra has gotten thousands of rupees in their account which were stolen by the bank. The public here will definitely vote for him but the other two parties put in a lot of money to sway the votes in their favour. The newspapers don’t even show that the contest in Bhadra is triangular, forget showing how Poonia has an edge,” said Hari Singh, a farmer from Ramgarh village in Hanumangarh.

The harassment over excessive interest has reached a point now where farmers are willing to support anyone who speaks against the bank.

Also read: Two Insults, Two Encounters: Why Rajputs are Angry with Vasundhara Raje and the BJP

In October 2014, when Lalchand, a KCC-holding farmer in Chhani Bari, was informed that SBI had charged an interest of Rs 37,099 on his loan, despair grabbed him. Suddenly, he thought of Bansal who he had seen examining passbooks for incorrectly charged interest, and rushed to his house. Bansal checked and assured him that he would not be required to pay that amount as the interest would soon be reversed. Two months later, Rs 32,156 – roughly seven times the chargeable interest – was reversed by SBI as excess interest charged.

Another passbook shows that SBI charged Rs 15,557 as extra interest that was later reversed at the beginning of this year.

Tuli Ram, a KCC holder from Ramgarh village, says that the 3% subsidy meant to be given on KCC loans under the cap of Rs 3 lakh as per government guidelines hasn’t reached his account. “Government guidelines are just a formality, it’s us who are required to move around the officials to get our work done.” 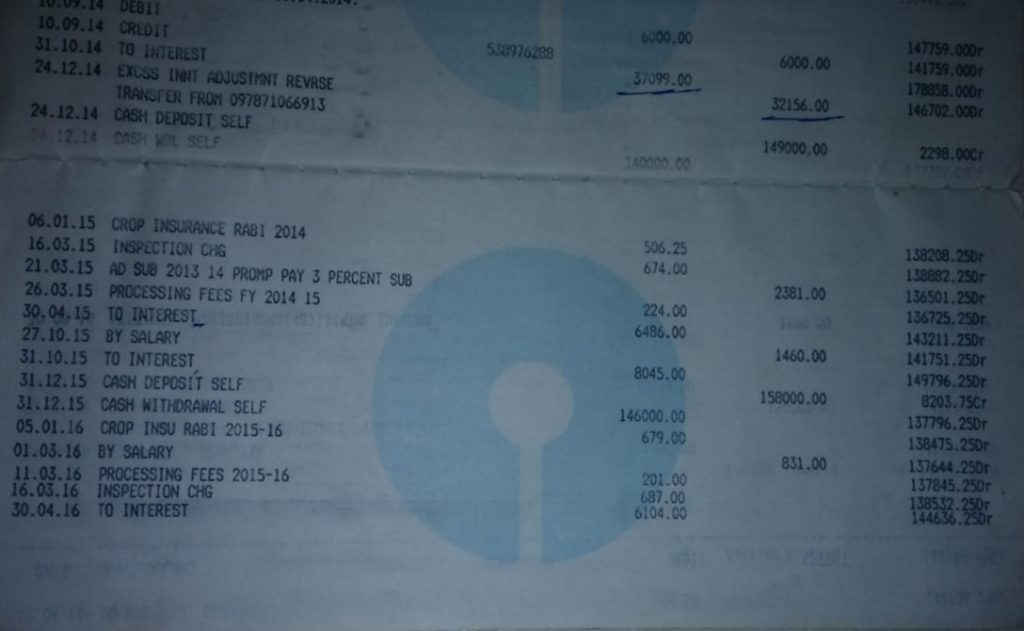 Lalchand was charged Rs 37,099 as interest, of which Rs 32156 was later reversed. Credit: Shruti Jain

If money is being credited to these accounts, it is clear that the bank incorrectly charged a higher interest. But the question remains – was it a technical error or a deliberate attempt at over-charging farmers?

Bansal, who has closely seen the banking system transform, believes irregularities began cropping up after the system became computerised.

“Earlier, when the manager had to manually write the transactions, he could not get away with any mistake, but now, mistake of any magnitude is brushed aside as ‘software issue’ which has essentially made them pursue their will,” said Bansal.

Speaking to The Wire, Mukesh Kumar, manager of the SBI Ramgarh branch in Hanumangarh, who was posted after the blunder came to light, said, “There is no denial that extra interest was charged but there was a problem in the system. The system is such that things cannot go error-free.”

And there are an abundant number of errors. For instance, farmers in this district also claim that SBI is transferring LPG subsidies from their savings account to their KCC account without their consent.

Subhash Chand, a KCC-holding farmer from Chhani Bari, said, “LPG subsidy for the entire 2015 was transferred from my savings account to my KCC account, without my consent. We have no faith in the banking system; they work like thieves.”

However, the bank has said that to recover its money, it has the power to take away subsidies.

“If the customer is not paying the dues, the bank has the authority to even transfer the money from their saving accounts. They care for the subsidies that are just in three digits but are not bothered to pay the banks whom they owe amount in five digits and more,” said SBI’s Kumar.

Chand is not the only one in Chhani Bari whose subsidy has been lifted. Many more farmers and non-farmers came out with similar claims.

For many farmers that The Wire met in Hanumangarh, understanding text messages from the bank – written in English – is also a big issue. Even the alert messages for payment, though delivered, serve no purpose. Basic banking terminology like ‘credit’ and ‘debit’ creates confusion for them.

Om Prakash, a farmer from Chhani Bari who has started selling groundnuts for an additional income to support his family, couldn’t decipher the messages from the bank. “I couldn’t pay the interest back on time. So when I requested the bank to grant me some extra time, they replied that they had already sent me a reminder message for the same and now there is no way out.”

SBI also deducted a premium of Rs 1,999 from their KCC account for RML Information Services, a provider of Reuters Market Light – under which farmers get messages on their mobile about mandi prices, weather forecast and agriculture advice. When the farmers protested against this app as it was of no use to them, SBI paid back the debited premium in some accounts. However, many are yet to receive it.

“Even the mandi prices it showed weren’t reliable and then the bank expects we should pay for such an app too. Many KCC holders haven’t received the premium back,” said Suresh, an active member of AIKS in Chhani Bari.

Approximately 3,052 KCC-holding farmers of Ramgarh Ujjalwas, Gorkhana and Bhukarka villages in Rajasthan’s Hanumangarh district were denied insurance claims under prime minister’s crop insurance scheme as SBI failed to credit the debited premium of farmers to the account of the insurance company – Bajaj Allianz.

SBI’s Ramgarh Ujjalwas branch transferred the premium to the account of Agriculture Insurance Company of India (AIC) instead, and when AIC returned the money, the deadline for payment had already passed. The other two branches – Bhukarka and Gorkhana – on the other hand, made no attempt to pay the premium.

The farmers staged a 36-day-long protest in July under the leadership of Poonia to compel the bank to pay their claims. SBI had an agreement with the All India Kisan Sabha that the farmers would be granted claims as per the criteria set in the PMFBY guidelines. However, there are still many farmers who are yet to receive the amount.

Nathu Ram, a farmer from Nohar who has a KCC account in SBI’s Ramgarh Ujjalwas branch, was among the thousands whose debited premium was not paid to the insurance company by the bank. Even after the agreement, Ram hasn’t received the claim and is facing trouble sowing the crop this season. Dilip Bhamboo, an AIKS member, talking to the farmers in the village. Credit: Shruti Jain

“Last year, the crop was damaged but the bank didn’t pay the claim. Now, this season, I have taken a debt for sowing the crop. If the production isn’t profitable, which is likely, I will have no option but to commit suicide.”

Jai Karan is the sole breadwinner of the family. SBI debited premium from his account for the 2017 kharif season, which assured him that the company would pay if the crop suffered a loss. He turned to the banking loan because the sahukar (moneylender) charges a lot of interest but is soon losing interest in this system too.

“Today, any farmer who suffers damage on two successive crops is finished. The banks and insurance is a show-off, they just work to loot a farmer’s money. It’s unfortunate that the government has chosen farmers to make money,” said Jai Karan, another KCC-holding farmer from Nohar.

SBI says that it has paid all the farmers. “We have paid all the KCC holders who were eligible for the PMFBY claim for kharif 2017,” said SBI’s manager Mukesh Kumar.

People in Hanumangarh, whose business came to a halt post demonetisation, spoke about how they are denied loans to revive their work.

Ali Sher, a utensil manufacturer in Ramgarh village, saw a major downfall post demonetisation. In the village, people would purchase utensils from his shop at the time of their children’s marriage, with a promise to pay as and when they had money. In November 2016, during the wedding season, like any other year, a lot of customers owed money to him, but the note ban destroyed their capability to pay. Since then, he has been trying to get a loan to start a new business, but the bank keeps denying him.

“In my workshop, 15 workers used to work before the note ban, now there are just two – who are working on very low wages. I have been trying hard to seek a loan to start a new business; all my documents are complete yet the manager is denying it.”

Kuldeep, a mechanic, used to repair farm equipment. However, post demonetisation, farm activities dropped and so did his work. His sons who used to go to private schools had to take admission in government schools. The children now miss the English classes that used to happen in their previous school.

“My kids are not able to adjust in the government school; they keep complaining how the school has no system and students keep playing the whole day. All I can understand is that if the bank agrees to give me a loan, my condition will improve – to at least what it was a few years ago.”