Minister of state for finance Anurag Singh Thakur also told the Lok Sabha that non-performing assets of banks have declined because of the government's strategy of recognition, resolution, recapitalisation and reforms. 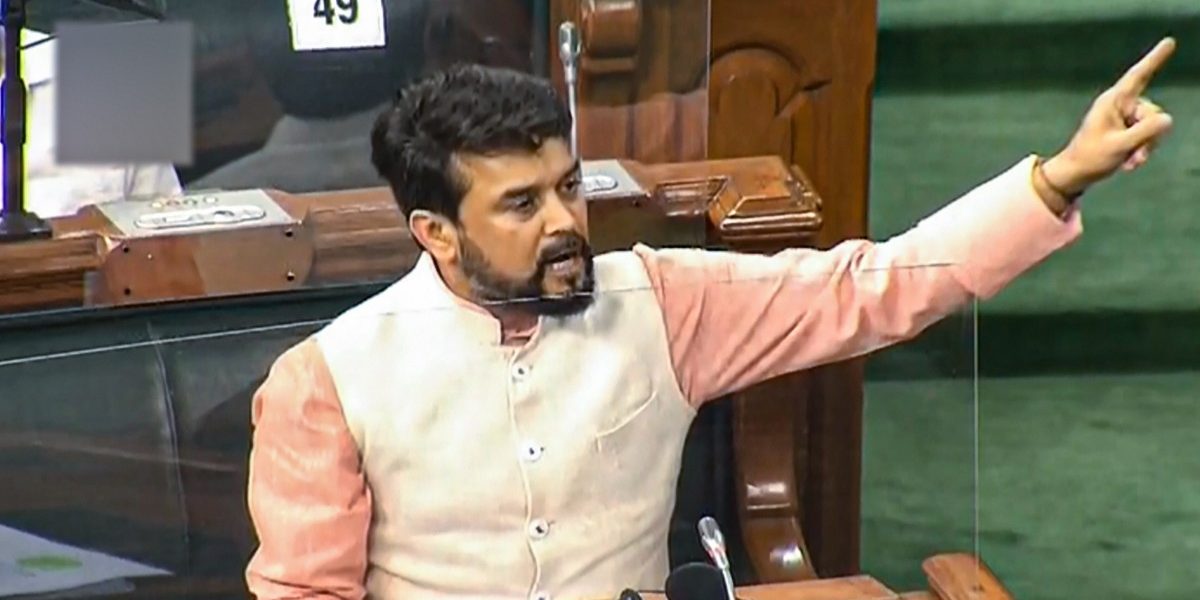 Minister of State for Finance Anurag Thakur speaks in Lok Sabha during the ongoing Monsoon Session of Parliament, amid the coronavirus pandemic, in New Delhi, Friday, Sept. 18, 2020. Photo: PTI

New Delhi: Banks have written off bad loans to the tune of Rs 1.15 lakh crore during the first three-quarters of the current fiscal, the Lok Sabha was informed on Monday.

As per RBI guidelines and policy approved by bank boards, non-performing loans, including those in respect of which full provisioning has been made on completion of four years, are removed from the balance-sheet of the bank concerned by way of write-off, minister of state for finance Anurag Singh Thakur said in a written reply to the Lok Sabha.

Banks evaluate the impact of write-offs as part of their regular exercise to clean up their balance-sheet, avail tax benefit and optimise capital in accordance with RBI guidelines and policy approved by their boards, he said.

Also read: It’s Budget Season. And That Means Talk of a ‘Bad Bank’ Yet Again.

With regard to recovery of written-off bank loans, he said, as per RBI guidelines, banks are required to have a loan recovery policy, duly vetted by their boards, that set down the manner of recovery of dues, period-wise targeted level of reduction in non-performing assets, etc.

“A number of recovery mechanism are available to banks to effect recovery, such as filing of a suit in civil courts or in Debts Recovery Tribunals, action under the Securitisation and Reconstruction of Financial Assets and Enforcement of Security Interest Act, 2002, filing of cases in the National Company Law Tribunal under the Insolvency and Bankruptcy Code, 2016, through negotiated settlement/compromise, and through the sale of non-performing assets,” he said.

During the last two financial years and the first three quarters of the current financial year, as per RBI data, SCBs recovered an amount of Rs 3,68,636 crore, including the recovery of Rs 68,219 crore from written-off loan accounts, he said.

Also read: Bad Loans Ratio of Banks May Shoot up to 13.5% by September, Higher if Severe Stress: RBI

He also said non-performing assets of banks have declined by Rs 2,79,627 crore to Rs 7,56,560 crore as of December 31, 2020, as a result of the government’s strategy of recognition, resolution, recapitalisation and reforms.

Replying to another question, Thakur said various measures have been taken to check unauthorised digital lending platforms. He said the Ministry of Electronics and Information Technology has informed that to prevent fraudulent activities of such lenders, it has blocked 27 loan lending apps under Section 69A of the Information Technology Act, 2000.

Members of the general public were cautioned against unauthorised digital lending platforms/apps with an appeal to verify the antecedents of the service provider with translation in vernacular languages also being released in the local media across states, he said.

Thakur also said there was no proposal at present for limiting banking operations to five days.