Axis Bank – A License to Launder?

Blaming the money laundering instances on a few employees and suspending officials may deflect public and regulatory criticism but the cancer is widespread. 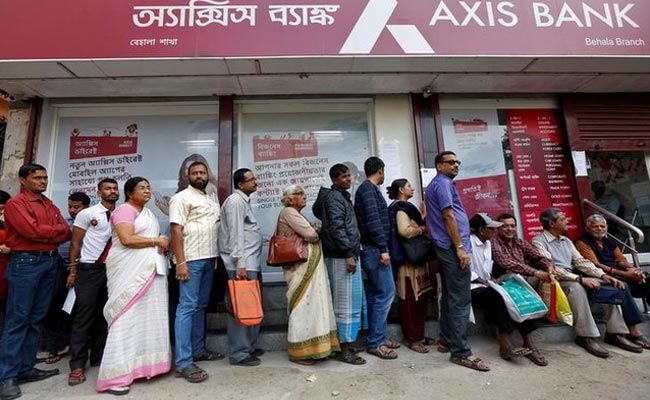 Axis Bank is built on a shaky house of cards. Credit: Reuters

Money laundering is not alien to Axis Bank. On July 26, 2011, an investigation by the online media firm, Cobrapost, showed officials of both private and government banks soliciting clients for laundering black money. The sting videos revealed these practices to be  widespread at Axis Bank . In June 2013, Axis Bank was not only fined Rs 5 crore, the maximum possible, by the Reserve Bank of India (RBI) for these transgressions but it received the highest fine amongst all the banks featured in the sting operation. Post the penalty, Axis Bank assured the public that remedial action had been undertaken. However, three years later, it seems that not much has changed.

Since the announcement of demonetisation on the night of November 8, 2016, authorities have unearthed more than Rs. 100 crore of such laundering at Axis Bank, arrested two Axis Bank staff, leading to the suspension of 19 of its officials. The widespread publicity that has accompanied these events has shaken the public’s confidence in the bank and even led to an article in an obscure regional newspaper stating that the RBI planned to revoke its banking license. To add to the humiliation, the RBI had to specifically issue a press release explicitly stating that no such action was being contemplated and the bank in its wisdom prominently displayed this notice on its website as if showcasing an accolade.

On Twitter and other social media platforms, Axis Bank has been a subject of ridicule; which in turn was counteracted with an opposing Twitter trend (Proud2BeAxisBank).

Axis Bank staff have not even been spared at private social engagements: as a serving bank officer informed this writer, “we are confronted with acquaintances and strangers mockingly requesting us to convert black money and it has become embarrassing for us to introduce ourselves as employees of the bank.”

Belatedly reacting to the waves of negative publicity, Shikha Sharma, CEO of Axis Bank, sent an email to all its customers on December 18, 2016 stating, “The recent media reports around the conduct of a few of our employees have left me embarrassed and upset. We have fallen short of your expectations because a handful of people did not follow our fully compliant and robust processes. We have taken the toughest action against such employees and we will do so in every case of divergence from our Code of Conduct.”

Absolving oneself of any responsibility and instead blaming a few rotten apples is a time-honoured tradition of CEOs when confronted with widespread illegality, and Shikha Sharma is no exception.  She appears oblivious to the fact that, since taking charge of the bank in June 2009, she has implemented a strategy that promotes excessive risk in order to achieve ambitious performance targets at any cost. Indeed, it could be argued that the incidents of money laundering that we are seeing are a natural outcome of the culture that she, with the full support of the board of directors, introduced and fostered in the bank.

Interactions with serving and former Axis Bank staff reveal a very different picture from that portrayed by senior management. Since taking charge, more than seven years ago, Shikha Sharma changed the organisational structure to promoting marketing and selling of financial products while weakening control and operations. In banks, the sales and marketing functions have to be counter-balanced with stronger operational risk and audit management, and the latter must have seasoned and more senior bankers well versed in banking regulation and RBI circulars as compared with the marketing, so as to rein in sales.

Branches are the main hives of business activity in banks. Retail liability branches generally have three separate units: sales, responsible primarily for acquiring new customer and usually driven by targets and incentives; operations, responsible for anti-money laundering (AML) and know your customer (KYC) regulations, handling cash, clearing and compliance; and, finally, relationship management for high-networth clients. For new client acquisition and selling of any product to a client the first cross-check is done by operations.

In the past, the branch manager oversaw all these functions, and he/she in turn reported to the regional head, who had responsibility for around 40-50 branches. The regional head was assisted by regional heads of sales, operations, relationship and audit, who supervised their counterparts in the branches.

After the appointment of Shikha Sharma, in order to facilitate higher growth of business and reduce costs, the post of ‘cluster head’ was introduced between the branches and the regional office. This post had responsibility for around 15 branches, and was responsible for only sales. For cost reasons there were no cluster heads for operations, relationships or audit, and no secretarial staff. The individuals responsible for operations and relationships at branches had to report to the cluster head. Hence the orientation in the bank tilted sharply towards marketing and sales at the cost of operational and risk management. In the new dispensation, even operational staff at branches were given sales targets, and the focus of the bank became meeting performance targets. Checks and balances such as operations and audit were regarded as cost centres and impediments to growing the balance sheet.

In tune with this aggressive marketing strategy, the bank systematically removed or sidelined seasoned bankers recruited from government banks, especially in critical departments like operations and audit, and replaced them with inexperienced management graduates. Government-bank staffers are schooled in doing banking through time-tested procedures and complying with regulations, as government banks have tough internal auditors, and come under the Central Vigilance Commission.

In the bank’s unpopular voluntary retirement scheme in 2015, many senior, experienced bankers were ‘persuaded’ to cut short their careers. Three presidents (one of whom was responsible for inspection and audit) out of a total of 10-11 presidents, and 17 senior vice-presidents (SVPs) of around 100-120 SVPs in the bank decided to avail of the scheme. With the loss of seasoned bank staff, the banking knowledge level of employees declined as preference was given to employees with a marketing and selling orientation from consumer products companies where achieving sales targets is all-important.

In the tenure of P.J. Nayak, the previous chairman and managing director (January 2000 – April 2009) of Axis Bank, every effort was made to ensure that the retail operations and corporate risk management functions were headed by senior and higher grade officers as compared with their marketing/business counterparts. Operations and risk management never reported to business heads; the former reported to the heads of operations and risk management, who reported either directly to the CEO or an executive director not responsible for business functions. In contrast, during Shikha Sharma’s tenure, Krishna Kumar, senior vice-president, retail liabilities, operations reports to Sanjay Sailas, executive vice-president retail banking (in-charge of retail branches, liabilities and business). By subordinating retail operations to retail business, Shikha Sharma has sent a clear message to the entire retail network that retail business growth is far more important than operational parameters of AML and KYC.

The stiff and unrealistic performance targets (for example, regarding fee income, current and savings deposits, third party distribution) set by the senior management for branch staff are onerous to achieve if one complies with prudential banking regulations. In its annual employee performance appraisal, on a rating of 5, a rating of 2 and below is likely to get the candidate fired, while a high rating of 4-5 earns high monetary rewards and promotion. Hence employees realise that meeting the target by any means, fair or foul, gets significant rewards while low grades result in the huge downside of dismissal.  Therefore, a culture that accepts high-risk business as a means of achieving performance targets has slowly seeped into the organisation.

Axis Bank has also shown itself to subdue conscientious whistle-blowers who expose regulatory lapses by firing them using the draconian clause 3.5 of the bank’s ‘Staff Rules’. This clause enables the bank to terminate the services of an employee without assigning any reason for the termination. It is invoked for termination of employees whom the management finds itself not comfortable with due to extraneous reasons, i.e., reasons other than incompetence and non-performance. In these cases, Axis Bank states that the termination letter is to be treated as the relieving letter, thus denying any future employment for the employee in any other entity. Incorporating such harsh measures effectively silences any honest banker from complaining against any regulatory lapses which could disrupt the growth of business.

Shaiwali Paliwal, a former assistant vice-president with 14 years of banking experience, of which six years was with Axis Bank, was the bank’s first woman branch head in Rajasthan. She was posted at Banipark, Jaipur Branch, and under her leadership the branch received its best audit ratings. At her branch she pointed out certain lapses in mutual funds entries in the bank software to her higher authorities who were inflating mutual fund sales in October 2012, which exposed the conduct of her seniors at the regional office. Thereafter, charges of misconduct were levelled against her and she was persecuted through transfers and disciplinary hearings . She filed three whistle-blowing complaints: in September 2013 pertaining to mutual fund entries, in March 2014 pertaining to money laundering and in May 2014 implicating executive directors in framing false charges against her.  She was fired under clause 3.5 on July 31, 2014 and she filed a case against the bank on wrongful termination on September 6, 2014 in the Jaipur district court.

Sharad Shukla was a 9-year veteran at the bank and a former vice-president and chief investment officer of Axis Bank’s wealth management division who was consistently rewarded for his performance. On March 17, 2015, Shukla reported to the concerned bank authorities via email after he found he had free access to the highly restrictive dealing room of Axis Capital, a subsidiary of the bank. Instead of complimenting him for exposing this breach, he was orally warned of dismissal if he were to document such lapses again. After waiting six months for the bank to reply to him, he filed a whistle-blower complaint on August 10, 2015.  On August 28, 2015 he was informed that the complaint was closed and 3 days later, he was summoned and fired under Clause 3.5. He has subsequently filed a case in the Bombay High Court on March 17, 2016 for wrongful dismissal.

The aggression of sales, the weakening of operations and audit, removal of seasoned bankers and persecution of those pointing out regulatory lapses is compounded by the negligible commercial banking experience of the executive directors prior to joining Axis Bank. In Axis Bank, none of the executive directors (including the CEO and even the head of retail banking) have ever worked in a bank branch in their career. To date, the bank’s luminary-filled board of directors have endorsed all these actions and in doing so have exposed themselves as ornamental nameplates.  Blaming the money laundering instances on a few employees and suspending officials may deflect public and regulatory criticism but the cancer is widespread and it can be eradicated only with a complete restructuring of the board and the replacement of its executive directors.

Note: A detailed questionnaire was sent to Axis Bank officials by the author, with a bank spokesperson saying they had no comment to offer.