Men going to find jobs in India and the Middle East leaves the women to manage agricultural activities that were traditionally a man's domain, a job made harder by extreme poverty, which is the result of floods, droughts or earthquakes. 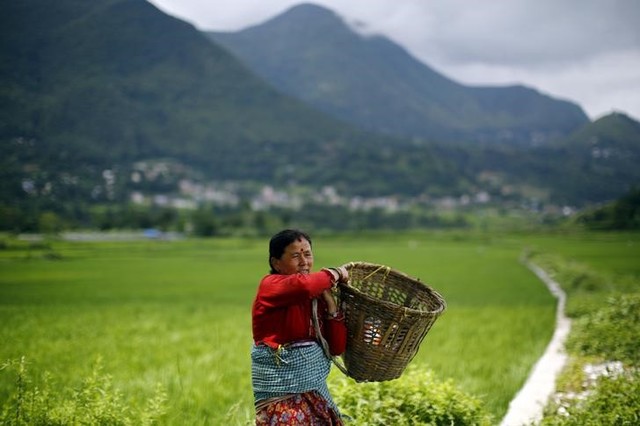 A woman carries a basket as she heads towards her field at Khokana in Lalitpur, Nepal August 18, 2015. Credit: Reuters/Navesh Chitrakar/Files

Phulbari: Ratna Chaudhary delicately lifts the hem of her pink and green dress with one hand, while using the other to scoop up a batch of cabbages in her garden in the village of Phulbari, a dozen kilometres from the Nepal-India border.

She calls three women to help, who join the dance-like movement, bending and swaying as they pick up vegetables and lay them in a basket.

“Since my husband works in India now, I’m responsible for harvesting all our crops,” said Chaudhary, holding two cabbages to her face before throwing the yellower one to the ground.

Her husband, Chatkauna, is one of at least 2.2 million Nepalis – nearly 10% of the population – who work abroad, according to the Nepal Institute of Development Studies.

For the past three years, Chatkauna has taken on seasonal work for most of the year as a miner in the Indian city of Haldwani. It pays more than the daily jobs he used to do in his hometown, and he returns to Phulbari every four months to see his family and hand over his earnings.

Migration of mainly low-skilled workers is a key source of income for Nepal, where remittances account for around a quarter of gross domestic product.

“Men going to find jobs in India and the Middle East leaves few to manage agricultural activities that were traditionally men‘s preserve,” he said. “As a result, more women are taking charge of farming work.”

Chaudhary used to work on a sugarcane farm in India herself. “We just couldn’t earn enough in our village,” she said.

For the past six months, however, she has cultivated her own patch of land and leases the remainder of it – 1,700 square metres (18,299 square feet) – to other poor, low-caste farmers from the “tharu” ethnic minority group, one of Nepal‘s largest.

In 2015, iDE helped Chaudhary set up a village vegetable co-operative, which she chairs, to boost local farmers’ incomes. The project is part of the Building Resilience and Adaptation to Climate Extremes and Disasters (BRACED) programme, funded by the British government.

“Rural communities in Nepal are plagued by extreme poverty, which is the result of recurring disasters such as floods, droughts or earthquakes,” said Pariyar.

Phulbari is no exception. Its long, flat stretches of land are well-suited to farming, but their proximity to the Mohana river makes them particularly vulnerable to floods.

With iDE’s help, 25 subsistence farmers – 18 women and five men – grow vegetables on 68 square-metre plots of land, which they rent from Chaudhary, paying her in cash or in kind.

They bring their spare produce to a collection centre, which transports the vegetables and other crops to large markets or sells them to regular buyers.

The co-operative also gives farmers better access to cheaper seeds, fertilisers and finance such as private investment and micro-credit.

While the project is still in its early days, it is already yielding results. “Farmers now earn 50 rupees ($0.50) more a day than they did previously,” said Pariyar.

Chaudhary expects to earn 9,800 rupees ($90) per year from leasing her land to fellow farmers.

Over two-thirds of the group’s members are women whose husbands travel abroad for seasonal jobs. Chaudhary takes pride in encouraging her friends and relatives to get into agricultural work, and become the decision makers in their family.

“The women belonging to the co-operative are now treated with respect,” added Chaudhary. “Most of them don’t see this work as a constraint but as an opportunity to have a say in the community and provide for their families.”

Sitting in her kitchen next to a mud-built oven, she prepares a mixture of rice flour and water for her four children.