Why Bihari Farmers Are Looking to Sell Their Sugarcane in Nepal

The closure of a sugar mill has left farmers in Sitamarhi and Sheohar with no other option. 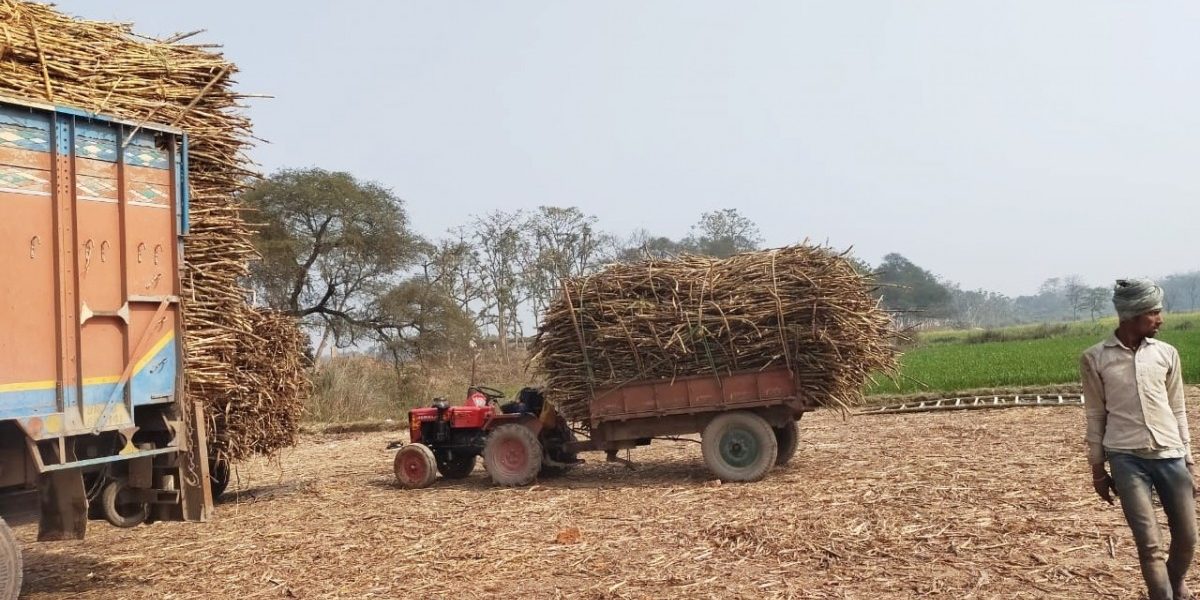 Sitamarhi (Bihar): Farmer Gunanand Chaudhary of Hirolwa, Majorganj block in Bihar’s Sitamarhi had cultivated sugarcane on a 25-acre field. When the district’s only sugar mill, Riga Sugar Mill, announced that it won’t be opening this year, it came as a shock. Thankfully, Nepal is just four km from his village.

Riga Sugar Mill is one of the oldest sugar mills in Bihar. It was founded in 1933, and later acquired by the Kolkata-based Dhanuka Group. Approximately 50,000 sugarcane farmers from Sheohar, Muzaffarpur and Sitamarhi reportedly supplied sugarcane to this mill – and the majority were from Sitamarhi.

This season, 11 lakh quintals of sugarcanes were grown in Sitamarhi and Sheohar districts. However, the Riga Sugar Mill management said it won’t be operating the mill, citing a dispute with workers. The mill management sent two letters to the Bihar sugarcane industry department on December 23 and 25 last year, clearly saying that it will not operate its mill.

After receiving the letters, Arshad Aziz, the sugarcane commissioner, held meetings with two mills in Gopalganj and one mill in West Champaran, in which it was decided that these three mills would buy sugarcane from farmers of Sheohar and Sitamarhi. It was also decided that 19 procurement centres would be set up, for the purchase of sugarcane by these mills, so that farmers could sell the sugarcane near their villages. On January 13, the department released a written order in this regard.

Sugarcane farmer Sudhir Singh of Riga block in Sitamarhi told The Wire, “I sold all my sugarcane through middlemen. I got only Rs 180 per quintal, while selling directly to the Riga Sugar Mill used to get me Rs 300 per quintal. I had to vacate the field and sow another crop, so I sold sugarcane at a loss. ”

According to farmers, producing one quintal of sugarcane costs around Rs 175.

Since the distance from Sitamarhi and Sheohar to Gopalganj and West Champaran is more than 150 km, it was a tough job for most farmers to that far and sell sugarcane directly to the mills.

Om Prakash Kushwaha sold 1200 quintals of sugarcane directly to the Sidhwalia sugar mill in Gopalganj, but to no avail.

“Sidhwalia mill management gave me Rs 275 per quintal, but Rs 100 per quintal was spent on transport. So, only Rs 175 was in my hand. I would have received the same amount even if I had sold to middlemen,” Om Prakash told The Wire.

Farmers were selling their sugarcane even while suffering losses, but all of sudden the three sugar mills identified by the government stopped crushing cane. This brought the farmers to another crossroads. 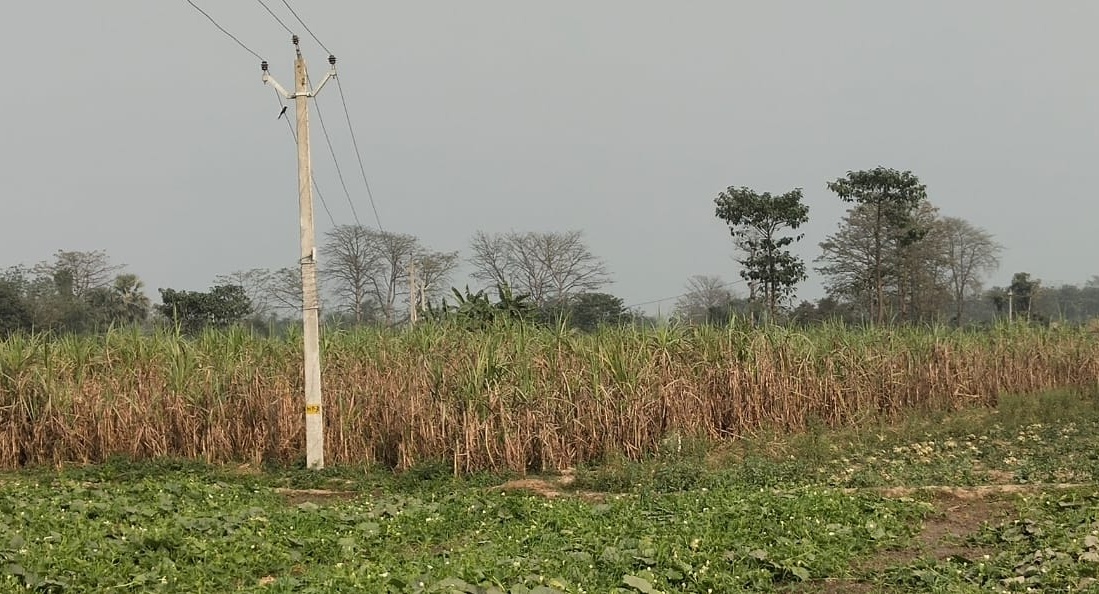 Due to the closure of the Riga mill and three other designated mills, farmers are unable to sell their sugarcane in Bihar and are sending it to Nepal mills. Photo: Umesh Kumar Ray

Nagendra Prasad Singh, general secretary of Bihar Pradesh Enkh Kastakar Union, told The Wire, “From the second-third weeks of February, all three sugar mills have been closed. When we contacted the sugarcane commissioner, he told us that farmers can sell to any sugar mill, but when farmers try to sell to other mills, they are refusing, citing poor quality sugarcane.”

“Recently, I have visited half a dozen villages where I found huge quantities of sugarcane lying unsold in the fields. I estimate 4-5 lakh quintal sugarcane is yet to be sold,” he said

Calls to the sugarcane commissioner went unanswered. The Wire has sent him an e-mail. The story will be updated as and when he responds.

Nepal came as a saviour

Finally, the border was opened in February – almost a year after being closed. This decision proved to be a boon for the farmers of Sitamarhi.

Gunanand Chaudhary sold sugarcane in Nepal for the first time this year. He said, “Since the Nepal border is just 4-5 km from Majorganj and we have contacts there, I was able to sell sugarcane at the rate of Rs 215 per quintal. If I sold sugarcane to the middleman here, I would have got Rs 175-180 per quintal.”

Sugar mills in Nepal buy a quintal of sugarcane from local sugarcane farmers at 471 Nepali rupees (Rs 297) and in addition, Nepal gives a subsidy of Rs 65 per quintal to its farmers. People of Nepali origin who carry sugarcane from Bihar sell the sugarcane in the mill and give the receipt to the government and get the subsidy. This gives them a good profit without much efforts. A person of Nepali origin, who sells sugarcane from Sitamarhi to the sugar mills of Nepal, told The Wire on the condition of anonymity, “Sugarcane production is decreasing in Nepal, so the mill management is always ready to buy sugarcane from Bihar. Since the Riga Sugar Mill is closed this year, many farmers want to sell sugarcane to us.”

Sitamarhi farmers don’t have to spend on transportation when they sell sugarcane to Nepal. Chaudhary said, “When the deal is finalised, people from Nepal themselves bring tractors and load the sugarcane. The good thing is that they weigh one hundred kg and pay for exactly a hundred ky. But here in Bihar, middlemen would buy 100 kg and pay money for only 90 kg. ”

Local sources told The Wire that sugarcane is sent to Nepal via three checkposts and supplied to sugar mills located in Nepal, 15-100 km from the Bihar border.

“Since the administration knows that Sitamarhi’s sugar mill is closed, they do not stop these sugarcane-laden tractors,” the source told The Wire.

Experts say that Madhubani farmers sell their sugarcane to Nepali mills as sugar mills in the district were closed long ago. But Sitamarhi farmers hardly ever sold their produce in Nepal. This is a new trend – and if the Riga mill remains closed, it may become permanent.

The sugar industry in Nepal started after 1947, when the first sugar mill, Morang Sugar Mill Limited, was established. Currently, sugarcane is mainly cultivated in 14 districts of the country. However, sugarcane acreage and production have both declined over the years.

Sugar mills are unable to exploit their full capacity due to low production, so the supply of sugarcane from India and especially from Bihar is beneficial for these mills.

Rajan Chaudhary, another sugarcane farmer of Majorganj, is desperate to sell his sugarcane. He said, “If sugarcane is not sold, then we will have only one option to recover the cost of production – convert the sugarcane into jaggery by using a bull crusher.” But, he said, “The main issue with this is the market. We have no market where we can sell that much jaggery at a good price. Secondly, the winter season is over, so jaggery will melt quickly and buyers will not buy it.”

“I don’t want to face uncertainty after investing labour in jaggery making. So, I am planning to sell 800 quintal of sugarcane to Nepali sugar mills. Talks are on for a deal,” he told The Wire.

Bihar has been a pioneer in the sugar industry. The first sugar mill in the country was opened in the year 1907 at Marhaura in Saran district of Bihar. Altogether, 29 sugar mills were opened, mostly in North Bihar.

But currently, 20 mills are closed and only nine are running, out of which two are public-sector owned, according to the Bihar Sugar Mills Association.

As per Bihar Sugar Mills Association, there are various reasons for the poor performance of the sugar industry in Bihar.

Naresh Bhatt, secretary of the Bihar Sugar Mills Association, told The Wire, “There is no linkage between sugar price and sugarcane price. Price of sugarcane increases every year but sugar prices remain stagnant. If the sugar industry will not earn a profit, how will it run?”

He cited another reason for the decline of the sugar industry. “In Bihar, recovery is very low compared to Uttar Pradesh. In Bihar if 100 kg sugarcane is crushed we get 10kg sugar, but UP mills get 11-12 kg sugar.”

However, economist N.K. Chaudhary believes, not adopting the latest technology and no capital investment has led to the decline of the sugar industry in the state. 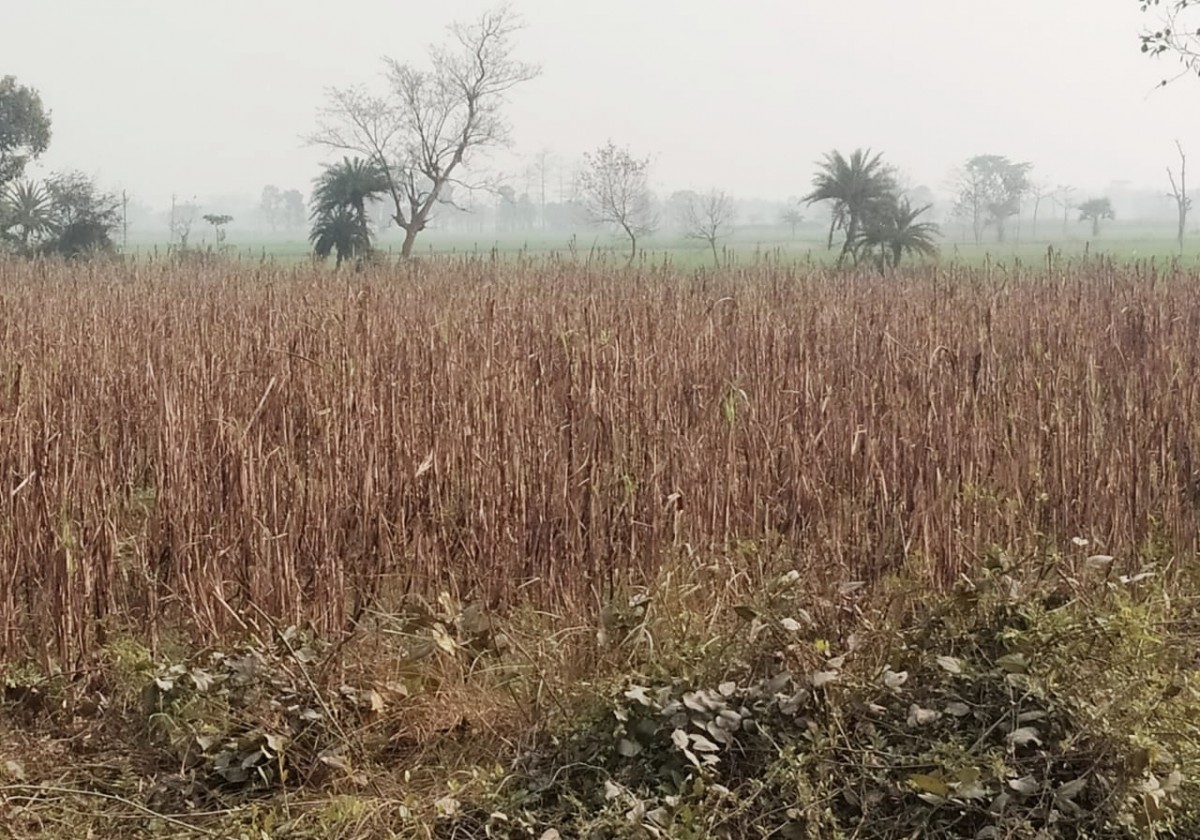 Fully grown sugarcane is drying out, as there is no buyer. Photo: Umesh Kumar Ray

With the closure of sugar mills, sugarcane farmers moved to other crops, thereby reducing the sugarcane producing area. In 2015, sugarcane was cultivated on 2.5 lakh hectares in Bihar, which decreased to 2.2 lakh hectares in the year 2020, according to a reply in the Lok Sabha.

Sugarcane farmers of Sheohar and Sitamarhi are disillusioned due to the sudden closure of the Riga sugar mill and the lack of concrete arrangements for the sale of sugarcane from the government.

Kushwaha has a masters in political science. He said, “Earlier I used to cultivate sugarcane on eight acres and used to earn at least Rs five lakh a year, but the situation has been getting worse for the last 4-5 years. Many farmers including me have not been paid the price of sugarcane we sold to sugar mills for the last two seasons.”

“I took a loan of Rs 1,00,000 three years ago through the Kisan Credit Card. But so far I have been able to give two instalments only. There is not much savings from farming to repay the loan,” he added.

Like Kushwaha, hundreds of farmers are in the mood not to cultivate sugarcane from next year. If the sugarcane farmers of Sitamarhi and Sheohar do not cultivate sugarcane in the future, it will have a cascading effect on the Riga sugar mill. Riga mill will not be able to operate due to less sugarcane production. This means the remaining farmers who will grow sugarcane next year will have to struggle to sell it to other mills. On the other hand, the future of 600 workers working in Riga sugar will remain uncertain.