Wheat and Rice Procurement at Record High: What Should Change to Promote Diversification?

Efforts to promote diversification from paddy (and sugarcane too) can be made acceptable to all stakeholders only if a plan is prepared in consultation with the experts, state governments, and approved by the National Development Council. 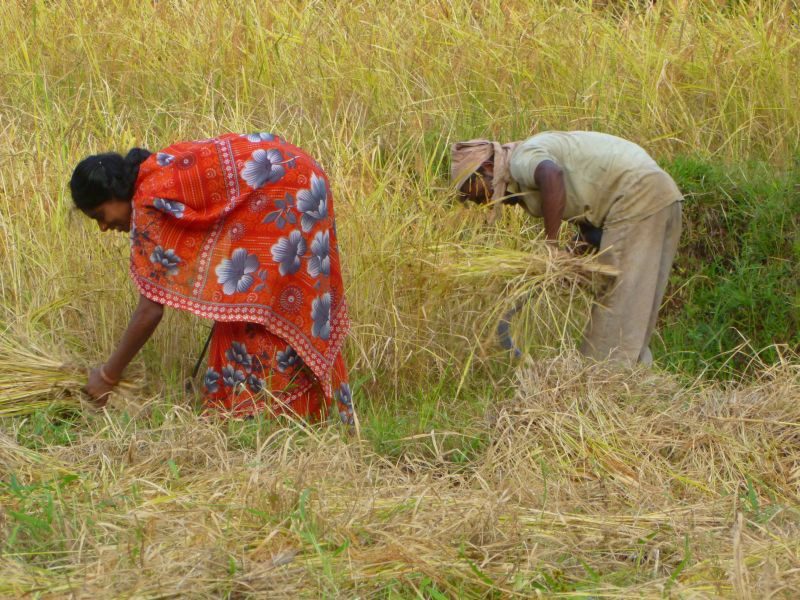 And this increase in procurement is not coming from Punjab.

In case of wheat, it is primarily due to Madhya Pradesh. The state has done wonders in setting up a robust system of procurement due to which it has shown the sharpest increase in wheat procurement in the last ten years. In the case of rice, it is due to Andhra Pradesh, Odisha, Chhattisgarh and Telangana, who have substantially increased their procurement.

It is the decentralised procurement states which are contributing to higher procurement. These states procure and meet their requirement of public distribution system from such stocks.  The surplus quantity is handed over to FCI for moving to deficit states.

The story of wheat production and procurement in Madhya Pradesh shows what can be achieved if the state is determined and officers are provided space to function without too much political interference.

In 2018-19, as per ‘Agricultural Statistics at a Glance’, the total production of wheat in MP was 155 lakh tonne. According to the state government, the wheat production rose to 252.8 lakh tonnes in 2018-19 and then to 372 lakh tonnes in 2019-20. This phenomenal increase of 140% in wheat production is due to increase in area under wheat, higher productivity, increase in irrigation coverage and diversion of area from other crops like pulses. Farmers’ preference for wheat is understandable as procurement of wheat is more assured than other Rabi crops like chana and masoor and the MP farmers have taken full advantage of this near certainty of procurement of wheat.

It shows how assured procurement is guiding production decisions by farmers. Also, it suggests that the findings of the National Sample Survey (NSS) 70th round – undertaken during 2012-13 – that a large percentage of farmers were not aware of the minimum support price (MSP) and large farmers benefitted disproportionately from public procurement needs to be revisited. However, large procurement in several decentralised procurement states proves that there is now a much higher awareness about MSP and its benefits and small farmers are also able to sell their wheat and paddy at MSP. 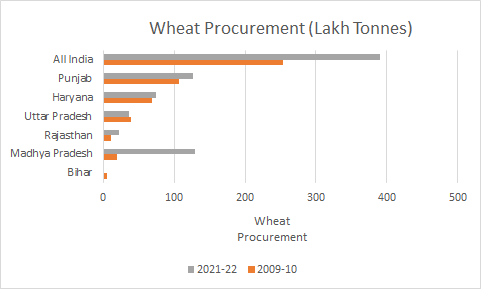 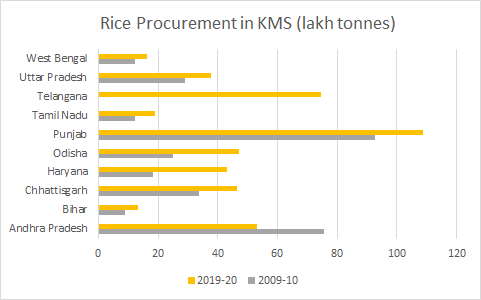 Telangana has recently emerged as a star performer for rice production and procurement. Undivided Andhra Pradesh procured 75.6 lakh tonne rice in 2009-10. In Kharif Marketing Season 2019-20, Andhra Pradesh and Telangana together procured 130 lakh tonnes of rice. Telangana’s success is attributed to completion of several irrigation projects such as Devadula and Kaleshwaram and revival of tanks under Mission Kakatiya. Sadly, Telangana is also providing free electricity to farmers whose adverse impact will show up in a few years.

The net result of increasing procurement is that the central pool stocks on June 1, 2021 would have crossed 1,000 lakh tonnes. Food Corporation of India (FCI) and state agencies are not equipped to maintain such a high level of stocks and the water stressed regions of India cannot carry on with depleting water tables.

Paddy nurseries are being prepared now and with the arrival of monsoon, the transplantation will be undertaken. With no specific incentive from the Union government to discourage rice production in water stressed regions, it is the states who have been doing their bit.
In 2020, Haryana launched “Mera Pani Meri Virasat” scheme and offered to extend a grant of Rs 17,500 per hectare to the farmers who diversify from paddy to less water guzzling crops like cotton, maize, pulses and horticulture crops. However, due to the collapse of maize prices, the farmers’ income was much lower than from paddy.

On May 29, 2021, Chhattisgarh announced Kisan Nyay Yojana to promote diversification. Farmers diversifying from paddy to kodo, sugarcane, tur, maize, soybean, other pulses and oilseeds will be given Rs 25,000 per hectare as a grant. For paddy farmers who opt for plantation on their fields, a grant of Rs 25,000 per hectare has been announced for three years. In the past, tree species aggressively promoted by the government turned out to be water guzzling too.

Also read: It’s Time for a 10-Year-Plan That Says How Much Rice and Wheat Will Be Procured From Each State

In Kharif 2020, Telengana announced a policy of linking payment of Rythu Bandhu conditional upon reducing area under maize and increasing the cropped area tur and cotton. The plan was not quite successful, cotton farmers suffered due to heavy rains in October 2020, resulting in high moisture. Cotton farmers did not realise the fair price for such cotton. Since Telangana had walked out of Pradhan Mantri Fasal Bima Yojana (PMFBY), the cotton farmers were not insured.

Ultimately Telangana had to pay the Rythu Bandhu amount to all the farmers.

So, a careful strategy is needed to achieve the objective of conserving water and preserving ecological balance. For this, help of expert organisations needs to be taken at the stage of planning itself.

These efforts to promote diversification from paddy (and sugarcane too) can be made acceptable to all stakeholders only if a ten-year plan is prepared by NITI Aayog in consultation with the experts and the state governments and the same is approved by the National Development Council. The Union government should then steer diversification in right earnest by providing financial support to the states. The original green revolution states may require a preferential treatment in this process.

It will be honouring the spirit of federalism.

Siraj Hussain is visiting senior fellow, ICRIER. He was Union agriculture secretary. Jugal Mohapatra has served the Government of India as secretary, fertilisers and rural development.