‘We Just Need Traders to Buy Our Crops at Govt-Mandated Rates’: Farmers from Bundelkhand

As protests against the new farm laws continue, UP’s cultivators demand the opening of 138 mandis already constructed for Rs 625.33 crore under a 2009 package, but then left to rot. 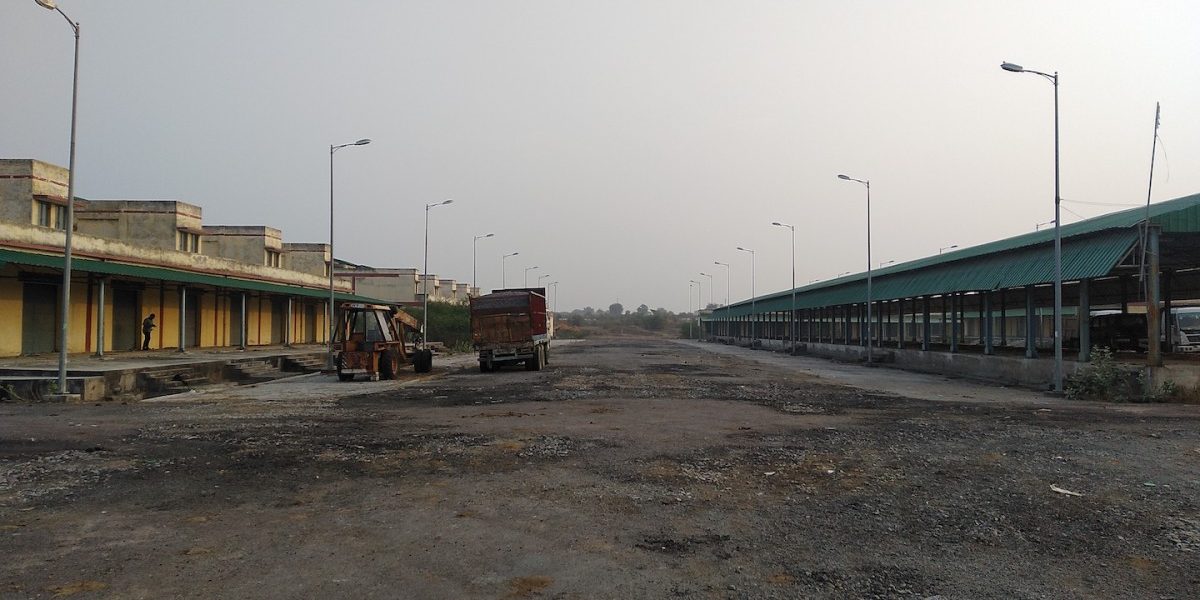 Banda (Uttar Pradesh): About 40 km from Banda district in Bundelkhand, a region with a severe water crisis, 70-year-old Ram Snehi Chaudhary cultivates 20-22 bighas of land in Arsaunda village. The absence of a proper irrigation system in the drought-hit region ruins most of his crops each year. Last year, for instance, he managed to produce only about 10 quintals of optimum quality wheat.

When Chaudhary arrived at a government procurement centre to sell his produce, he was not allowed to get his turn. “Big farmers run these places,” alleged Chaudhary. “The brokers give them a turn in exchange for money. Since the procurement agency does not have much space and work is slow, farmers like us have to wait for weeks for our turn.”

Eventually, Chaudhary was compelled to sell his wheat to private buyers at Rs 1,600 per quintal, when the minimum support price (MSP) for wheat fixed by the government was Rs 1,925.

“If the government sets up a market here and mandates that the crop be purchased at government rates, or at most at a marginal profit, it will be a great help,” said Chaudhary.

In order to provide Bundelkhand’s farmers with a good agricultural market, several crores of rupees were spent under the 2009 Bundelkhand package on setting up mandis (markets) in all seven districts of Uttar Pradesh’s Bundelkhand region, including Banda.

However, only a few of these mandis have started operations. The premises of most of these agricultural markets have become deserted, roads are broken, tin roofs have rusted and walls have gathered moss.

In fact, Chaudhary was not even aware that a mandi had been set up in Simouni, about seven km from his village.

“We learned that there is an agricultural market here only after you [The Wire] told us today,” he said. “It’s true that we incur losses, but what else can we do? We are compelled to sell our produce at cheaper rates to afford clothes, medicines for our children and meet other expenses.”

Pawan Singh Vidyarthi, a young farmer from Khandeha village in Chitrakoot district, about 150 km from Chaudhary’s village, also describes the pathetic state of procurement in his area.

In 2015, a market was inaugurated by former chief minister of Uttar Pradesh Akhilesh Yadav, but the premises are forlorn now, heaped with dung and overgrown hedges. Instead of grain, the go-downs (storage spaces) are filled with straw. Lights had been installed, but they are never lit. And the roads have become muddied. The Banda mandi, which has been set up under the Bundelkhand Package by spending Rs 63 crore, is not operational yet. Photo: The Wire

The condition of the agricultural market is so pathetic that the government has declared it a temporary gaushala (cow sheds) instead of starting the procurement of agricultural produce here.

“There are about 35 villages around here where the farmers are very upset due to the non-commissioning of the market,” said Singh. “Complaints have been made several times in this regard, but the administration pays no heed. It is ridiculous that the government is talking about offering a new market to the farmers by introducing new agricultural laws, while the mandis set up by the government in Bundelkhand are being wasted, just waiting to operate.”

A nationwide agitation against three agricultural laws introduced by the Central government in 2020 has been raging for the past several months. One of these laws is the Farmers’ Produce Trade and Commerce (Promotion and Facilitation) Bill 2020, under which a provision has been made to create new arrangements for the purchase and sale of agricultural produce by private traders outside the Agricultural Produce Marketing Committee (APMC) mandis.

Farmers allege that the move would render them completely at the mercy of private traders, forced to comply with their conditions.

Meanwhile, the farmers of Bundelkhand region claim that in the absence of a government procurement system, they are already compelled to sell their produce to private agents. Therefore, they demand that the mandis be opened so that they have other options to sell their crops at reasonable prices.

“It is nothing new for the farmer to sell outside the mandis,” said Singh. “Farmers have been selling their produce at lower rates outside mandis for a long time. We don’t want a new law. We just want the mandis to open and start functioning.”

Pawan Singh has been waiting for his turn outside the paddy procurement centre of PCF, UP’s procurement agency, for more than a week.

The centre has been set up in a small room adjacent to a government school outside the village and is the only procurement centre catering to 30-35 villages.

Meanwhile, the state’s food and logistics department is procuring paddy at another agricultural market constructed under the Bundelkhand package in Barokhar, about 125 km from Singh’s village, though less than ten farmers are present there. 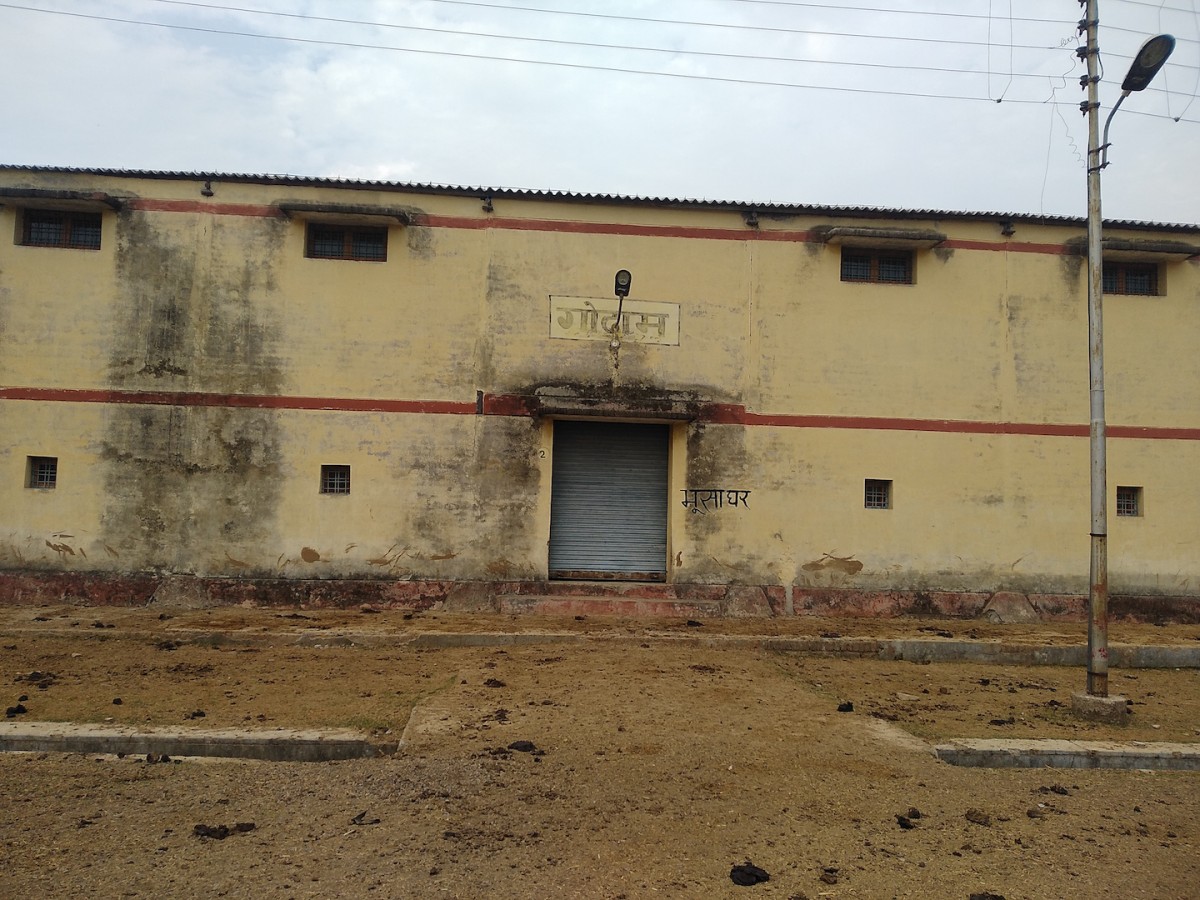 Godowns are being used to store hay rather than foodgrains. Photo: The Wire

Even this mandi has not been operational, and most of its constructed portion is lying unused. There are no customers and only five employees have been hired by the state government.

The watchman, Ashok Tiwari, complained that there is neither electricity nor water at the mandi and he has to guard the place throughout the day all alone.

Nawal Kishore, a resident of Padui village who had come to sell paddy, said, “Here, the procurement procedure is so slow that only two or three farmers are able to sell their crop every day. At such a pace, how many farmers will be able to sell their produce? The mandi is closed and buyers do not come here. The government spent so much money, but the farmers are not getting any benefit from it.”

In 2009, the much-hyped Bundelkhand package was announced by the Planning Commission (now NITI Aayog) to find an overall solution to the problems of the drought-prone Bundelkhand region.

The package included provisions for water and forest management, irrigation, animal husbandry, rural development, the agricultural sector and the agricultural market. It proposed setting up mandis at different locations with the objective of providing farmers remunerative prices for their produce.

Documents obtained by The Wire under the Right to Information (RTI) Act reveal that till May 2019, 138 mandis had been set up across the seven districts of Bundelkhand in Uttar Pradesh, with an expenditure of Rs 625.33 crore.

Of these, six are specified mandi sites, which have been built at the district level. The other 132 are rural infrastructure centres which have come up at the tehsil and block levels.

However, local people are angry because the mandis are not yet operational. “They have not benefitted the farmers and have been left to rot. The funds dispensed in its name were pocketed by politicians, officials and contractors,” the farmers say.

A specified agricultural market or Vishisht Mandi Sthal has been constructed on Mahoba Road, Banda, about 10 km outside the city at a cost of Rs 63.47 crores, but the condition of the market is deplorable, with collapsed walls allowing stray animals into the premises. As a result, the place has been covered in dung. The market is built over a large area, yet no farmer or agricultural businessman can be seen here. The locks on the gates of the warehouses have rusted, the procurement site is ridden with garbage, the path is laden with potholes, some dismantled vehicles are dumped here, while trucks caught for overloading are parked here by the administration. 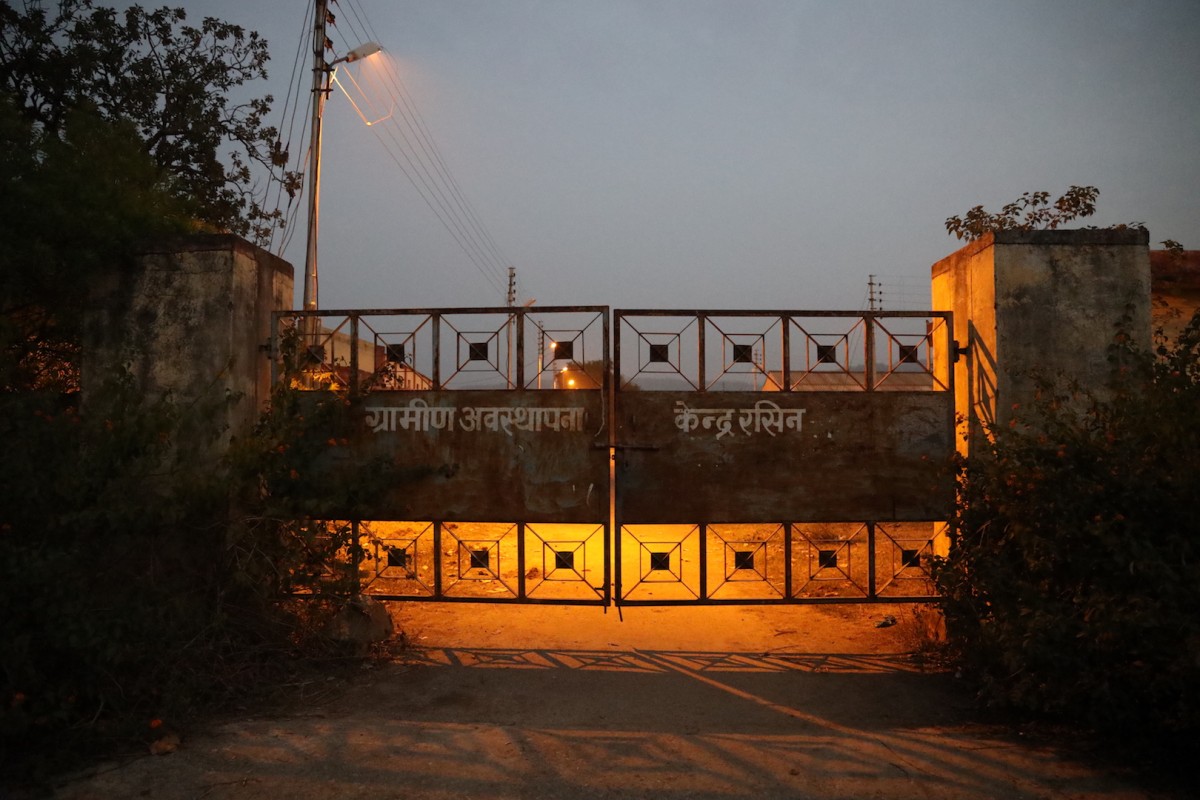 The condition of the grain market (a rural infrastructure centre) located in Rasin village, about 50 km from the district, is similar. The forest department uses the vacant go-downs of the market to store tendu leaves used in making bidis.

Madan Gopal Tiwari, an employee appointed by the department for security, said that no sale or purchase of any kind of agricultural produce is carried out here.

“The forest department has rented the warehouses as they were lying vacant,” he said. “This market has been unoccupied for the past several years. Farmers are unable to sell their produce here. It was also used as a gaushala for some time.”

Where are the traders?

In 2017, the members of parliament from Bundelkhand raised the issue of the mandis in the meetings of the NITI Aayog, after which the UP government was directed to open them immediately.

According to the minutes obtained by The Wire, in meetings chaired by NITI Aayog CEO Amitabh Kant on June 2, 2016, and April 17, 2017, the Uttar Pradesh government was asked to immediately open the mandis set up under the package keeping in mind the concerns of the MPs.

As per the minutes, the state government was directed that “agricultural marketing infrastructure built in the state under the Bundelkhand package should be started immediately and the concerns of MPs of Uttar Pradesh in this regard be resolved.”

However, the mandis have failed to start operations yet. Chief Minister Yogi Adityanath is the chairman of the Uttar Pradesh Agricultural Produce Market Council which bears the responsibility of operating these mandis. 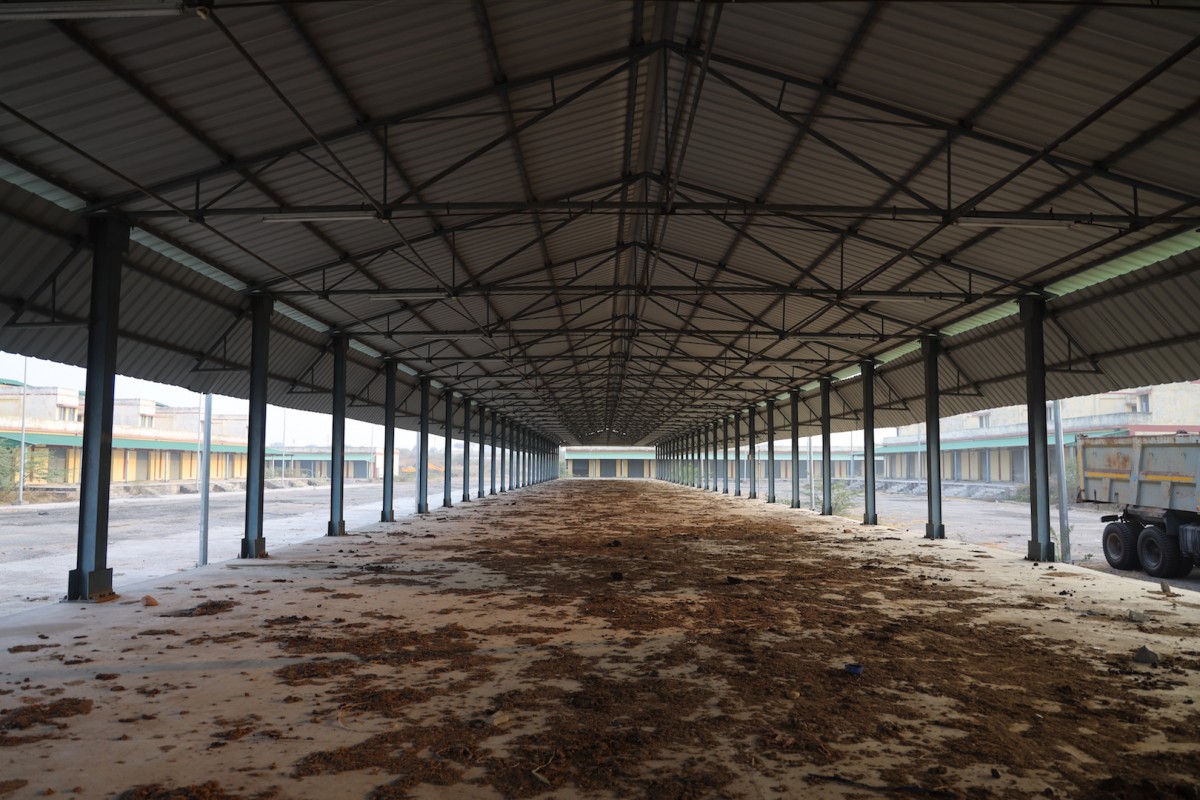 The mandis are covered in animal dung. Photo: The Wire

Chandrapal Tiwari, deputy director (administration) of the Mandi Council, who handle the responsibility of mandis in Bundelkhand, claimed that since these markets are mostly located at isolated places, traders do not want to go there and as a result no trading takes place.

He claimed that the administration is motivating the traders to make purchases by holding regular meetings with them.

“The aim was to have a mandi set up in every village so that storage capacity would be increased and farmers could easily get remunerative prices by selling their crops,” said Tiwari. “But the market will function only when the traders set up shop there and the traders are in cities where mandis are more advanced and accessible to a larger population.”

“Shops have been allotted to traders in three mandis out of seven district-level markets and purchases are being made and the work of allocation is going on in mandis of three districts,” he added. “A market is currently under construction. The allotment process of Banda mandi shops started last month but no businessman came here. These shops are given to the traders, after which the farmer brings his produce.”

Tiwari said that it will take a long time for all the mandis to become operational and among the government’s efforts in this direction, provision is being made to allot shops to traders at very low prices.

But the wait for the mandis to open is costing women farmers like Kiran Srivastava heavily. Kiran’s husband died a few years ago, following which the entire burden of cultivating the land and taking care of the home and her son has fallen on her shoulders. 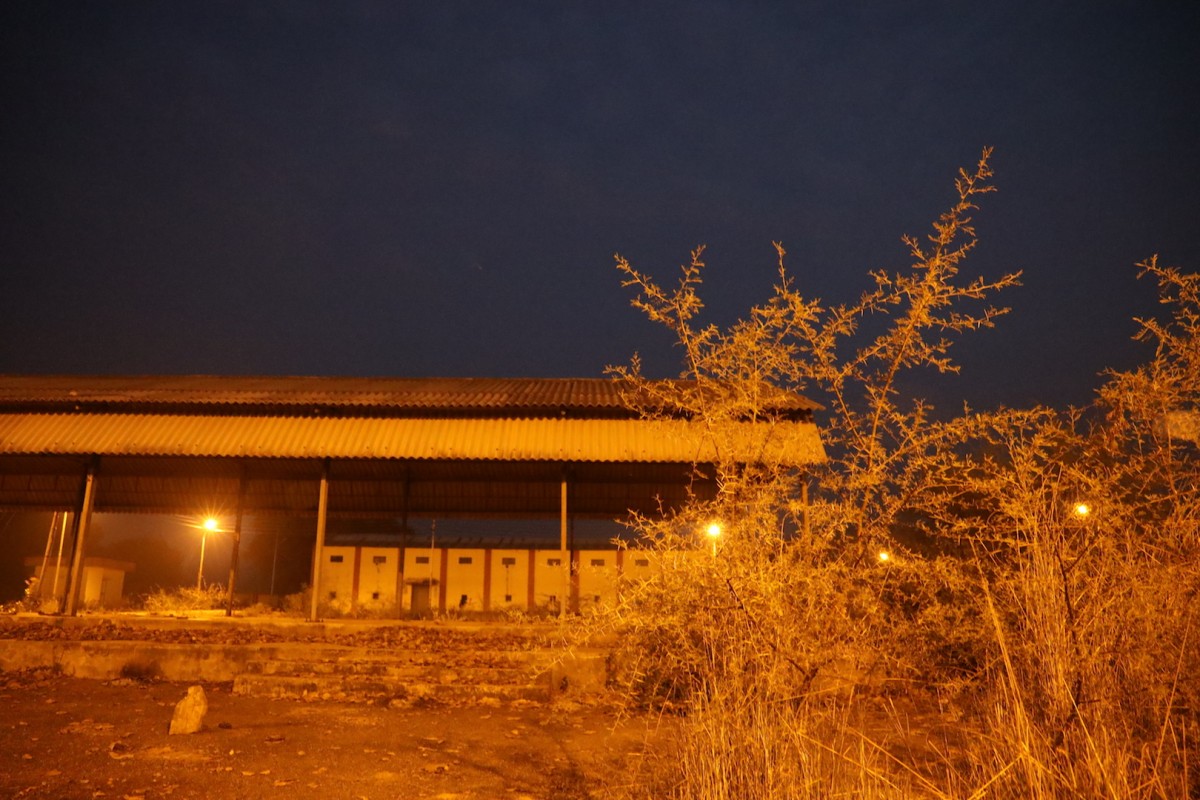 Unused and uncared for, the mandis in Bundelkhand are in a bad state. Photo: The Wire

Kiran said that the farmers of Bundelkhand are already faced with a multitude of problems, and the closed mandis only add to their woes, compelling them to sell their produce every year at prices which are about Rs 500 to Rs 600 lower than the government rates.

“Shouldn’t the rates fixed by the government be applicable everywhere?” asked Kiran. “Instead, in the absence of mandis, the farmers are forced to sell their produce at Rs 1,200 to Rs 1,500 where the government rate is Rs 2,000. Once I took my crop to the government procurement centre here, but despite waiting for eight days I could make no sale.”

According to Kiran, farmers in Bundelkhand will benefit from the Modi government’s new farm laws only if the government made purchasing produce at government rates mandatory.

“There is loss in agriculture, but there is nothing farmers can do, for it is their sole means of livelihood,” says Kiran.