In Uttar Pradesh and Maharashtra's Sugar Alliance, a Sweet Mixture of Politics and Business

​The two BJP-ruled states working together will give it greater lobbying power and comes at a time when the industry is looking to end volatile, bi-annual supply and demand crises.

A worker spreads sugar inside a sugar factory at Sanyan village in Gujarat April 23, 2012. REUTERS/Amit Dave/Files 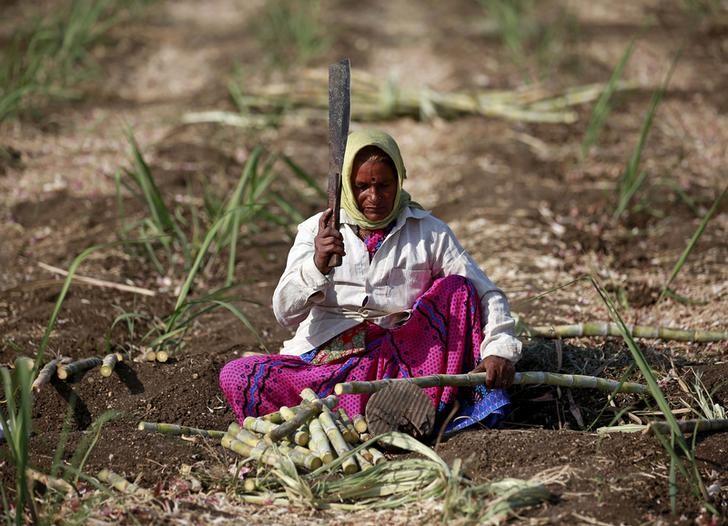 Two sugar giants – the states of Uttar Pradesh (UP) and Maharashtra – have struck an alliance in a major development on the farm front that is expected to give a better deal to cane growers and mills.

Although the broad contours of such an alliance are still being worked out, government and industry officials say that is likely that the combined voice will give both states greater leverage when it comes to influencing policy-making at the Centre.

The decision of the two BJP-ruled states, which account for a majority of India’s production of sugar large amount of sugar in the country, to work together for the common cause has come amid projections that the next two years would witness a record production of the sweetener.

UP and Maharashtra are key political states and an alliance between them in the sugar sector is significant as the two states together have 128 Lok Sabha seats out of a total 543.

UP has also provided several prime ministers including Narendra Modi (who represents Varanasi) with constituencies, while Maharashtra boasts of being the premier state in terms of development.

Prakash Naiknavare, managing director of the National Federation of Cooperative Sugar Factories Ltd (NFCSF), an apex body of sugar cooperatives in the country, who helped catalyse talks, said that the first such meeting of leaders of UP and Maharashtra took place last month in Lucknow.

UP minister for sugarcane development Suresh Rana, the state cane commissioner and managing director of the state sugar federation, participated in the meeting along with Maharashtra officials.

The NFCSF, which is acting as the nodal coordinator in the endeavour, expected the next meeting to be held between the two states in Maharashtra in a month. The federation comprises nine state federations and 264 sugar factories.

Talking to The Wire, Naiknavare insisted that the development was beneficial for all sugar producing states in the country as UP and Maharashtra are the largest in terms of production. The two states account for 45% India’s sugar mills and 70% of the country’s production. 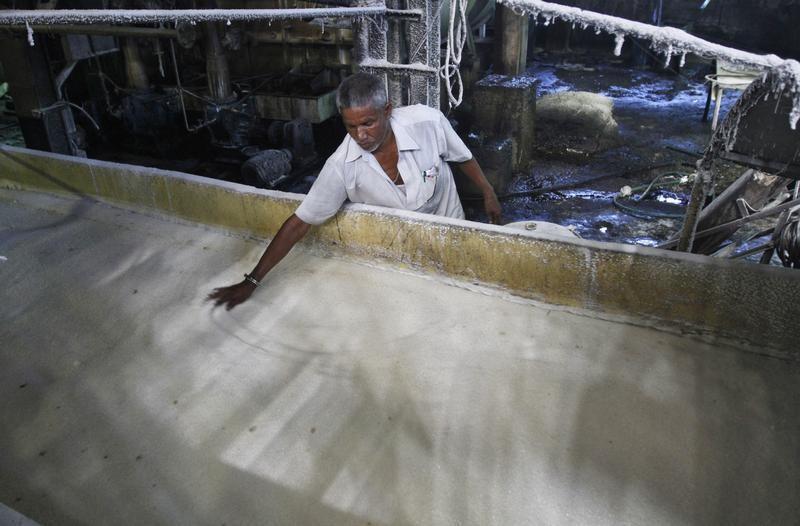 Even as UP and Maharashtra have taken baby steps to form the alliance, it is not yet clear as to how the other sugar producing states will react to the development. Initiators of the move,however, emphasise that it is a win-win situation to the cane grower, sugar mills and the consumer and have claimed that it would protect the interests of all.

How will this work?

Since the alliance is in the nascent stage, it is still unclear as to how UP and Maharashtra would go about the mammoth task and it would take a few meetings for the tie-up to take concrete shape.

Naiknavare stressed that the first step could be that UP and Maharashtra share their best practices in sugar development. Maharashtra is far ahead in terms of post-harvest management of the cane and has a skilled labour force to deal with the cutting of the cane which helps ensure maximum recovery.

With its undoubted political muscle, the pressure group would enable the sugar producing states to have a greater say in policy formulation during consultation with the Centre where several ministries, especially the food ministry, take key decisions on sugar policy.

In UP, the majority of sugar mills are in the private sector.

Such an alliance, industry sources say, also has the potential to bring about an interesting political amalgamation in the sugar sector because in Maharashtra, the sugar lobby is dominated by the NCP and Congress with leaders of the two parties controlling most of the powerful sugar cooperatives.

At the same time, it is also true that the BJP under the late deputy chief minister Gopinath Munde had started concerted attempts to make inroads in the sugar sector, which had witnessed several cooperative mills turning sick during the crisis in the past decade.

Besides this, sources say, it is widely understood that the BJP government in Maharashtra exerts enormous influence on cooperative institutions including sugar cooperatives, cooperative banks and educational institutions so as to ensure that its detractors do not get political benefits.

UP and Maharashtra have joined hands at a time when sugar prices have bottomed out over the last ten years, dealing a blow to industry as well as the cane grower. While the average cost of production was Rs 28 per kg of sugar, it was fetching a price of just Rs 19 in the market. 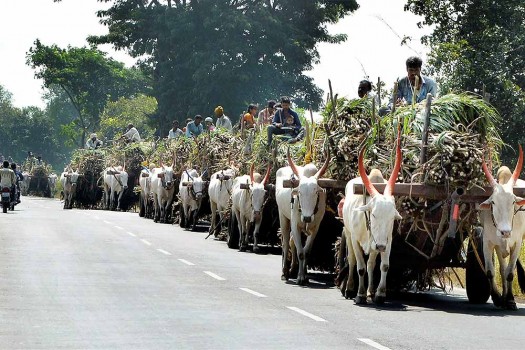 Bullock carts loaded with sugarcanes on their way to a sugar factory in Karad, Maharashtra. Credit: PTI

Interestingly, BJP has emerged as a dominant force both in UP and Maharashtra but also in their sugar belts in both the Lok Sabha and the Assembly polls and has given promises galore for a fair deal to the cane grower.

A highlight of recent years is that UP has emerged as the star sugar producing state not only in India but on global sugar map too. Naiknavare noted that this is primarily a result of concentrated effort in cane development and aggressive marketing. Although area under cane has remained static in the state in the last ten years, cane productivity per hectare has jumped from 59 tonnes to 73 tonnes while average sugar recovery has gone up from 8.94% to 10.62%.

What has done wonders in UP is the variety Co238 evolved by Bakshi Ram of the ICAR’s Sugarcane Breeding Institute at Coimbatore, which is gives overall 10 tonnes per hectare more cane to the farmers and an average of 1% more recovery to the sugar miller.

With 116 mills, including 91 in the private sector and 25 in the cooperative sector, UP gained the top spot less than a year ago; relegating Maharashtra to second place. The Yogi Adityanath-ruled state will likely continue to be king in the coming years both in terms of cane production and also production of sugar.

Against this backdrop, in sharp contrast, the sugar sector in Maharashtra is under severe financial crunch due to two back-to-back droughts which has brought down the average crushing duration to just 76 days as against normative 150 days. A sugar year starts on October 1 and ends on September 30.

UP and Maharashtra have formed the coalition at a time when the ensuing season 2017-18 is estimated to produce 255 lakh tonnes which clubbed with the opening stock of 40 lakh tonnes is more than enough to meet the all-India consumption of 250 lakh tonnes.

Though it is early, Naiknavare insists that the anticipated sugar production in 2018-19 would be an all time high of 290 lakh tonnes necessitating sugar exports from India. The National Federation has already flagged with the Centre the need for a dynamic policy to deal with the anticipated surplus in the next two years to avert another crisis.

What the government needs to do is to step up exports as also intensify efforts to improve the quality of the Indian sugar. “We have to have the quality of sugar which the world wants,” Naiknavare says adding that the sweetener used in the European as well as other advanced countries was of a much refined quality than that produced in India.

The sugar now produced in India has therefore a limited export potential mainly in the neighbourhood and some Gulf and African countries. There was need for a ethanol policy which would ensure that a certain amount of sugarcane is diverted solely for its production to stabilise the sugar prices and help the cane grower and the industry.

To stabilise the prices of the sweetener, the National Federation has been impressing upon the government that it could work for evolving a dual pricing system under which the domestic consumer could be given the commodity at cheaper rates than the one made available to the industry.

At the same time, it concedes that such a dual pricing policy is very difficult to implement. At present, 70% of sugar is used by the industry in the manufacture of sweetmeats, chocolates, soft drinks and biscuits. The sugar sector feels that the industry could afford the sweetener at Rs 60 a kg which would ensure the domestic consumer get it at Rs 35 a kg.

Incidentally, India is the second largest sugar producer in the world after Brazil. Europe, China and Thailand occupy the remaining three spots in the top five.