Why Adityanath’s Drive Against Slaughterhouses is Hasty and Thoughtless

To blame butchers and the meat industry for not complying with the law is to ignore the unhelpful attitude to business of the state’s administration. 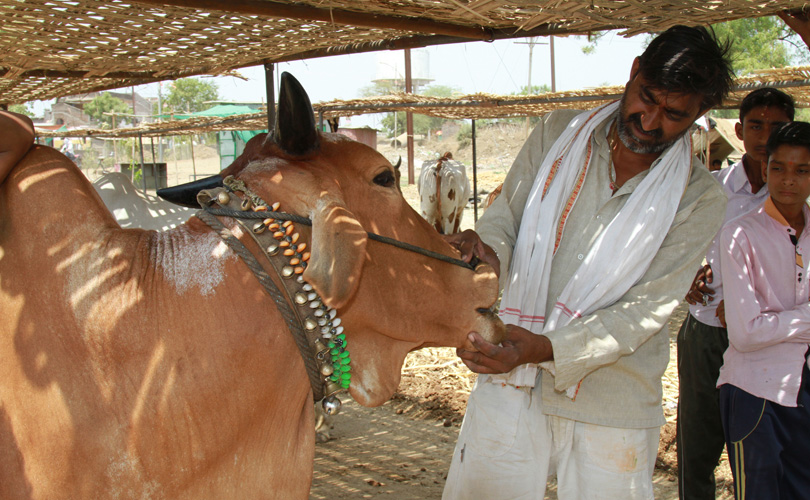 No milk without meat: A farmer examining an animal at Alipur village of Hinganghat tehsil in Maharashtra’s Wardha district. Credit: Vivian Fernandes

To blame butchers and the meat industry for not complying with the law is to ignore the unhelpful attitude to business of the state’s administration.

No milk without meat: A farmer examining an animal at Alipur village of Hinganghat tehsil in Maharashtra’s Wardha district. Credit: Vivian Fernandes

If the idea behind Uttar Pradesh’s drive against illegal slaughter of animals is to ensure health, hygiene and sanitation, Chief Minister Yogi Adityananand’s administration could have made its intentions clear, simplified the compliances and given time for butchers and slaughter houses to comply. Instead we see a repeat of the disruption of normal life that we witnessed last November when high value currently notes were pulled out of circulation. It is hard to defend illegality but in this country, and especially in Uttar Pradesh, even those who wish to abide by the law are forced to circumvent it because of onerous regulations and sloth and cussedness of the administration.

The architect Charles Correa once told me that if shops sprang up in places they were not meant to, it was a signal for planners to return to their drawing tables and amend city master plans. The law must learn from life.

Only the naive will believe that the drive against illegal slaughter of animals in UP has a benign purpose. If health, hygiene and humane treatment of animals were a concern, why close down mechanical abattoirs? It is hard to shake off the feeling that the intention is actually to punish a community which lives off the meat trade and did not vote for the ruling party, which in turn made no attempt to reach out to it: the ruling party did not field any member of the community in the recent assembly elections.

Despite their antagonisms, latent or open, UP’s principal communities are drawn to each other through economic ties. For the meat trade to flourish the milk industry must flourish, as the Indian Express notes in its editorial. If unproductive bovines cannot be culled, dairying will not be viable.  Despite the Indian affection for cows, their population is decreasing because most states restrict or ban their slaughter. There are no such constraint on buffaloes. At least not till recently.  Hence, their population has grown by a third from 84.2 million in 1992 to 108.7 million in 2012. Only a sixth of these are male. The rest are female.

The gender skew is not natural. It is deliberate to retain only productive, milk-giving animals.

The leather industry also feeds off the meat industry.

Buffalo meat is also a cheap source of protein. There are thousands of eateries that serve it as kebabs and curries.

All the four industries keep millions of people employed.

Jobs matter at a time of near jobless growth. The three years of this government have seen weak job growth despite India’s GDP rising at a fast clip. The Economic Survey has advised the government to focus on the apparel, leather and footwear sectors to keep Indians employed since rising wages has priced China out of these export markets.

The government talks of ease of doing business and maximum governance. But according to a report in the Indian Express, slaughter houses have to comply with a set of 24 regulations pertaining to treatment of animals, their movement on foot and transportation by vehicles, the discharge of effluents, the treatment of solid wastes and veterinary certification both of live animals and after slaughter.

While going overboard on its cultural agenda, the government must beware of unintended consequences. Across the country famers are complaining that because of tough laws against cattle slaughter and cow vigilantism, they cannot dispose of male and unproductive cattle and buffaloes. Neither can they afford to themselves feed them. Many of them are anguished to let cattle loose to fend for themselves. The menace of stray cattle is such that in Punjab farmers have taken to fencing off their fields at enormous cost. Cattle lying on ill-lit roads and highways are a hazard at night.

When communities are intertwined you cannot hurt one without harming the other.

Vivian Fernandes is editor of smartindianagriculture.in, where this article first appeared.