In UP's Chitrakoot, Farmers Are Waiting in Anticipation... for Sacks

While the deadline to have your produce weighed and sold at the government-appointed centres has been extended, it remains to be seen if the sacks will arrive in that time. An image of farmers at the mandi,taking the rice back to their homes since it has not yet been weighed. Credit: Khabar Lahariya 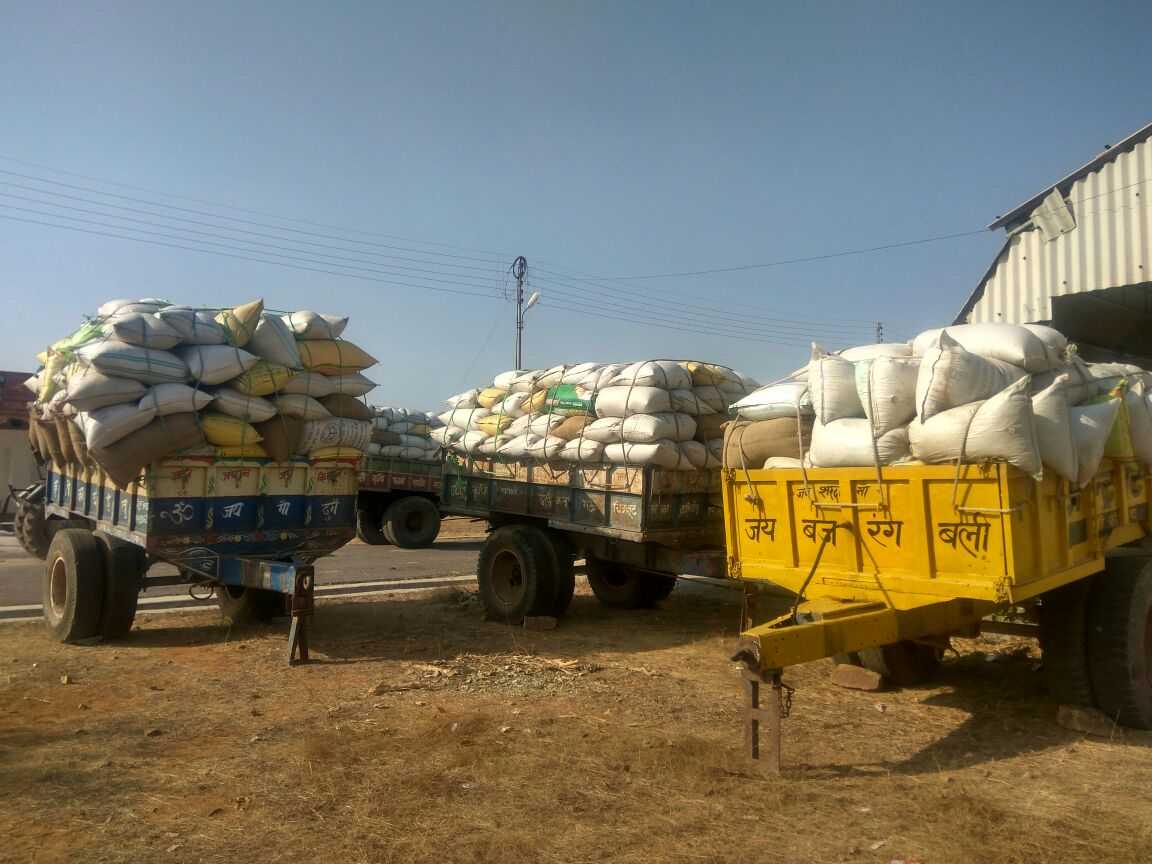 An image of the mandi where farmers are taking the rice back to their homes since it has not yet been weighed. Credit: Khabar Lahariya

“It’s been over two weeks now since we’ve been waiting”, says Sohan Lal at Chitrakoot’s Bargadh mandi, referring to the day after day that he has spent anticipating the arrival of sacks.

Sohan Lal has brought 20 quintals of rice in order to get them weighed, after which price estimates can be put onto them, post which he can hope to have it sold off.

But he has instead been waiting since the beginning of December. The grains are close to rotting, the birds are having a never-ending feast and Sohan Lal’s hard-earned perseverance the year round has all come to nought.

He is not alone. This bringing in of produce to the local or nearest galla mandi in order to have it weighed, estimated and sold is every farmer’s dream.

Or the destination of a journey he has been on for at least half a year. Or just another stage of a farmer’s life-cycle – if you’re feeling less romantic. The mandi is what he looks forward to, the selling of it is what it has all been building up to, after all.

At the Bargadh mandi, farmers from across 57 villages have been waiting, frustrated and anxious, many of them for a few weeks, some for a month and over.

Bundelkhand boasts of the Bundelkhand special package – a customised product that takes under its wings, among other things, the planned execution of galla mandis, the site of purchase for farmers’ produce, which is the equivalent of a fair, except there are no private buyers.

For each time that Uttar Pradesh has voted in a new political party, there has been an “all-new” Bundelkhand special package. When the BJP came to power in UP in early 2017, it was part of the then newly-sworn-in Adityanath’s top-priorities agenda, taking up place in the very first cabinet meeting he presided over in his official capacity as chief minister.

Just over a month later, in April 2017, plenty of media real estate went in reporting on Adityanath’s special plans for the special package – how he had flagged it in his meeting with the prime minister no less, requesting for help. How he had okayed a drinking-water package within the special package to the tune of 47 crores.

Cut to late January 2018, all the banners and placards – there were several that had been put up, freshly-painted in December 2017 – seem to be mocking the dire situation that farmers find themselves in.

Most of the new mandis that had been advertised, for instance, have not even opened shop for business, leaving scores of farmers to rely on the same old ones that face multiple issues of their own, such as distance – many farmers have to commute great distances to get to the assigned mandis. And they reach to find that the mandis are ill-equipped.

“Bori ki samasya bata rahein hain, ki bori nahi hain (The issue is one of sacks; they’re telling us that there are no sacks)”, says Vijay Kumar Tiwari from Khohar village who has been waiting since November 28.  He says, “I’ve queued up since then and my number’s been up, but what to do when there are no sacks?”

There are as many theories as there are farmers. Krishna Kumar, who’s here from Manka gaon, blames it on the mandi sachiv (market secretary) elections that are slated for January 31.“Everyone must be busy with that, aur kya? (what else?)”, says Kumar.

Ram Dhani Mishra, on the other hand, has a general air of disillusionment about him when he says, “See, they anyway weigh according to their own whims and fancies. It’s not like they ever follow protocol. Those who can afford to bribe them, those are the farmers whose produce is always weighed first.”

Vinod Kumar Kesharwani, who has already calculated how many sacks he will need –“I have about 30 quintals, should be 83 sacks” – is anxious about all the stray animals that have been roaming around the mandi, snacking on all the loose grain.

Radhe Shyam Dwivedi, who tells us about how he fought the infamous Bundelkhand drought while farming, is now scowling at the sun. “Ab dhoop mein aise hi pade hua hai sab kuch, kharaab toh hona hi hai. (Everything’s just lying exposed to the sunlight, of course it will rot).”

Dwivedi is considering a different plan of action. “There are a few farmers here who are tearing open their own sacks – what they brought their produce in – in order to save what’s worth. They are planning to take it outside the mandi now, to private buyers.”

Apparently, you could sell the grains loose at competitive prices, we learn, plus it rescues the farmers from the frustrating game of waiting forever.

At the time of filing of this report, deadline to have your produce weighed and sold had been extended by the government. Much noise is made over the shifting of the date from January 31 to February 28, but who’s to say of the work that will get done in these extra weeks? Or, indeed, if the sacks will arrive – the stuff of myth at the Bargadh mandi now.

When we speak with Suresh Chandra, who’s heading the Dhan-Kharid Centre at Bargadh, he laments: “Since December 11, we’ve had no fresh, new sacks. If they arrive, my mandi has the capacity to get through 400-500 sacks of grain every day. But if they don’t, toh dikkat toh hai (then of course, there’s a problem).”

So far, he tells us, the centre has weighed the produce of about 170 farmers. “But there is quite a bit remaining outside”, he adds, semi-apologetically.

Three thousand quintals, to be precise.

Three thousand quintals of grain lie in wait at the Bargadh galla mandi, their creators’ fates – unlike the grains themselves – already sealed.