A retired high court judge will probe the incident. 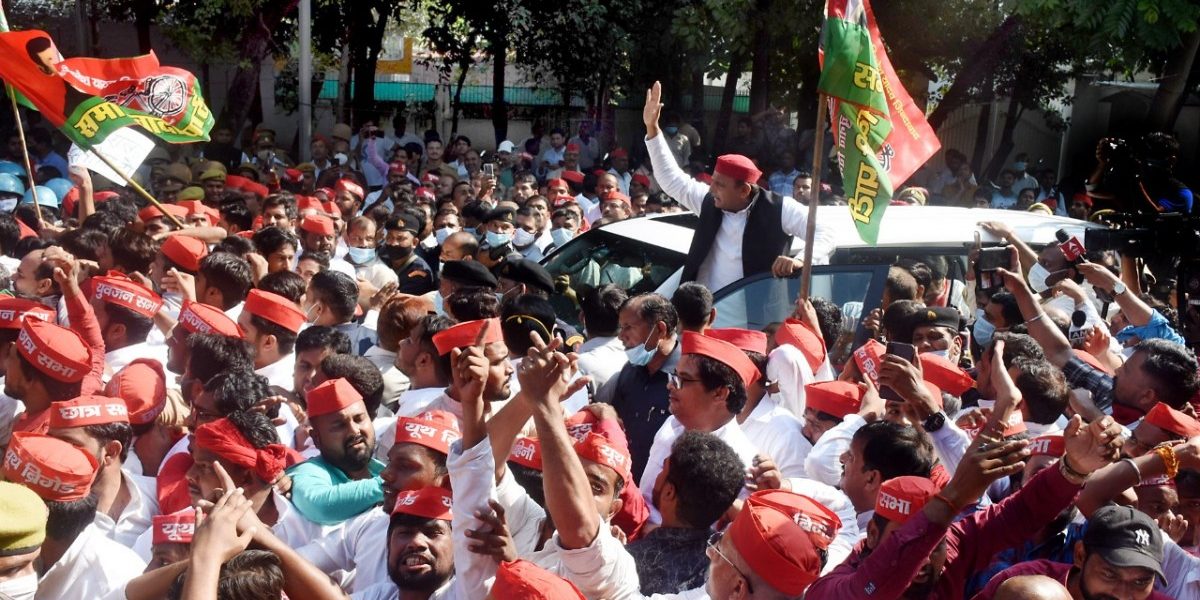 Akhilesh Yadav at the protest. He was not allowed to reach the spot where the incident occurred or meet the victims' families, and was reportedly detained on his way there. Photo: Chandrani Banerjee

New Delhi: Four farmers were among eight persons killed and 12-15 severely injured in Tikunia village of Uttar Pradesh’s Lakhimpur Kheri district on Sunday, October 3, after they were run over by a car that was allegedly part of a convoy of vehicles in which the Union minister of state for home affairs Ajay Mishra’s son was travelling. A murder case has been registered against Mishra’s son and several others, NDTV reported.

ADG law and order Prashant Kumar said on Monday morning that two FIRs had been registered on the violence. Indian Express has reported that an FIR has been registered at Tikonia police station against the Ajay Mishra’s son, Ashish, and 13 others on charges including murder and rioting.

Later in the afternoon, the ADG announced that the Uttar Pradesh government will give Rs 45 lakh each to the families of the dead and a government job to each family. The injured will be given Rs 10 lakh.

A retired high court judge will probe the incident, the ADG said.

The farmers, who had gathered there to protest against three contentious farm laws, have also accused the minister’s son of driving one of the cars that was involved in the accident, a charge the minister has denied. The protest was being held at that particular spot to block two ministers from visiting.

The situation immediately turned tense with protestors allegedly burning cars and the Uttar Pradesh government deploying heavy police personnel in the village and across the district.

Reports on Monday morning put the death toll from the incident at eight, including four farmers. Post-mortem on four of the bodies was conducted in the first half of Monday.

Mobile internet has been suspended in parts of the district, as anger and tensions run high after the killings. Section 144 has been imposed as well – and the order imposing the section says that nobody from Punjab should be allowed to enter the Lakhimpur Kheri area. Barricades were also put up by the police at the Uttar Pradesh-Delhi border at Ghaziabad, leading to big traffic delays on National Highway 24.

According to News18, one of the others killed in the incident was local journalist Raman Kashyap. Kashyap had gone missing on Sunday, the channel reported, and his family identified his body on Monday morning. 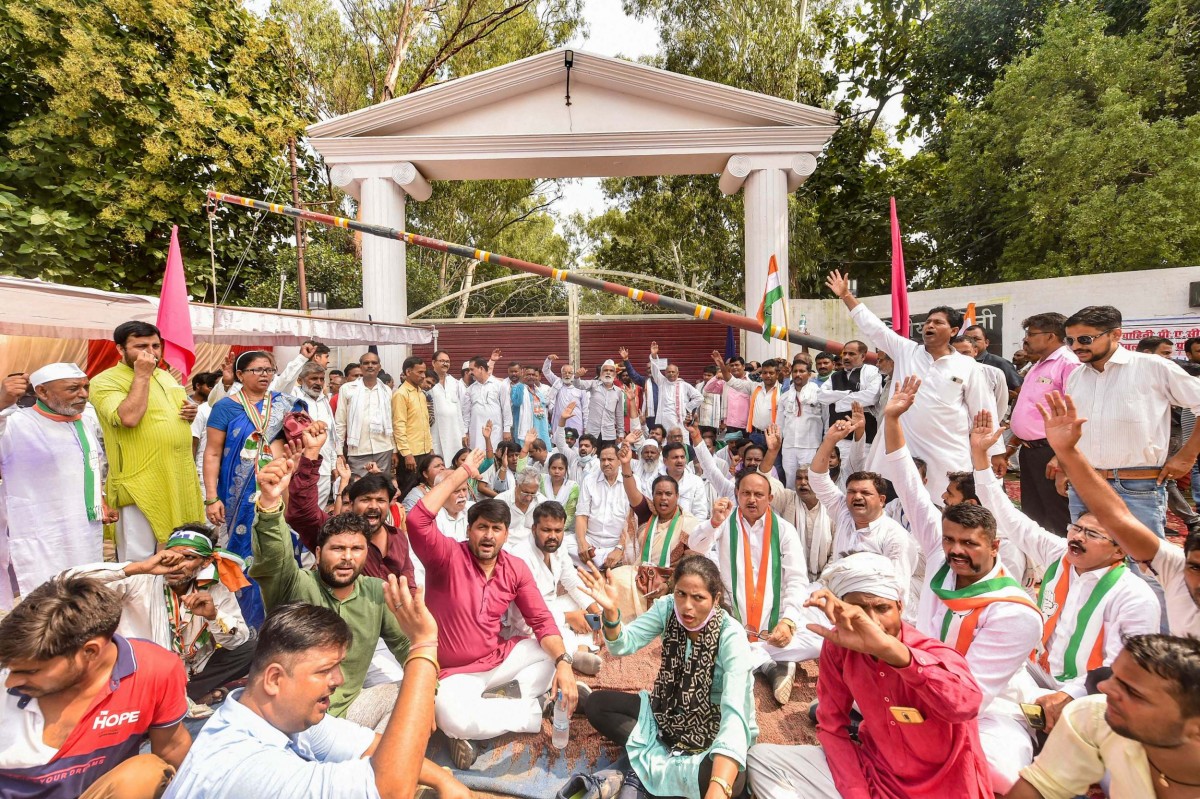 In a statement issued Sunday night after a virtual press conference, the Samyukt Kisan Morcha said it is able to confirm the deaths of four farmers – Lovepreet Singh (20), Daljeet Singh (35), Nachattar Singh (60) and Gurvinder Singh (19), and that around 12-15 persons had been injured”.

“It is confirmed that Ashish Mishra Teni (son of Union Minister of State for Home Affairs Ajay Mishra Teni) came with three vehicles around the time that farmers were dispersing from their protest at the helipad and mowed down farmers and towards the end also attacked SKM leader Tajinder Singh Virk directly, by trying to run a vehicle over him. There were also shots fired, and one of the deaths was by this shooting by Ashish Mishra Teni and his team,” the SKM alleged.

According to News18, Ajay Mishra Teni said his son was not at the spot when the incident took place. He said farmers had attacked the convoy with stones, and that one of his cars overturned as a result, crushing two farmers. Angry farmers then attacked and killed his driver and three BJP workers travelling in the convoy, he said.

This version contradicts farmers’ leader Rakesh Tikait’s and protesting farmers’ claim that the son was seen at the site and was responsible for the deaths of the eight. Reports have also said farmers have claimed that they saw police extract Ashish Mishra from the site in the immediate aftermath of the incident.

Early on Monday morning, the Uttar Pradesh police tweeted about the incident, calling it “unfortunate” and confirming that eight people had lost their lives.

The incident took place when farmers had gathered in Tikunia to register their protest by showing black flags to Uttar Pradesh deputy chief minister Keshav Prasad Maurya and Union minister Ajay Mishra, who were visiting the village for a few scheduled government programmes. Tikunia also happens to be the paternal village of Mishra.

According to farmers, they first gheraoed Keshav Prasad Maurya at the helipad and were returning to the road through which the convoy of ministers would move. It was at this point that farmers standing on both sides of the road with black flags were run over by three cars in a convoy in which Mishra’s son, Ashish Mishra, and his relatives, were travelling, the Samyukt Kisan Morcha has charged.

While one protestor had died on the spot, the others succumbed to injuries at a hospital, according to farmers.

“In view of the Lakhimpur incident, the entire state has been alerted. All the districts adjoining Lakhimpur have been put on high alert. Instructions have been given to keep a close watch on any type of activity,” DGP Mukul Goyel quoted as saying by India Today. He added that additional forces are being sent to the district in case of any flare up.

BKU leader Rakesh Tikait left Ghazipur and reached the spot early on Monday. “The protesting farmers were attacked, fired at by the cars’ cavalcade in Lakhimpur Kheri,” he claimed. Gurnam Singh Chaduni of BKU (Chaduni) called for mass gathering in Tikunia.

Meanwhile, the incident has been widely condemned by politicians across the spectrum. Congress leader Priyanka Gandhi Vadra was allegedly detained around 4 am on Sunday night while on her way to the meet the victims’ families. In a video of her speaking to the policemen who stopped her at Sitapur, she can be heard saying,  “I am not more important than the people you have killed. You give me a legal warrant, a legal basis or else I will not move from here and you won’t touch me. Warrant nikalo, order nikalo nahi toh main yahan se nahi hil rahi hoon (Produce a warrant or a legal order or else I am not moving out from here).”

Punjab chief minister Charanjit Singh Channi was also said to be making his way to Lakhimpur Kheri, but the Uttar Pradesh government reportedly denied him permission from entering. Former Punjab Congress chief Navjot Singh Sidhu too tried to reach the spot, but was detained on the way. Sidhu and other Congress leaders from Punjab then held a protest outside the Punjab governor’s house, demanding that they be allowed to visit the site, PTI reported.

Samajwadi Party leader Akhilesh Yadav said the people of Uttar Pradesh have had enough of the BJP’s “suppression”, and that Adityanath must resign. He too was not allowed to reach the spot where the incident occurred or meet the victims’ families, and was reportedly detained on his way there.

Akhilesh Yadav and other members of the Samajwadi Party being stopped by the UP police. Photo: Special arrangement

Bahujan Samaj Party head Mayawati has demanded a judicial probe into the incident. “BSP’s national general secretary and Rajya Sabha MP S C Mishra was placed under house arrest late last night at his residence in Lucknow, which is still continuing so that the party delegation under his leadership could not go to Lakhimpur Kheri to get the correct report of the farmer’s massacre. This is very sad and condemnable,” she tweeted on Monday.“Due to the involvement of two BJP ministers in the sad Kheri case of UP, proper government investigation of this incident and justice to the victims and strict punishment for the guilty does not seem possible. Therefore, this incident, in which 8 people have been confirmed dead so far, requires a judicial inquiry, the demand of BSP.”

“The sacrifice of our brave and determined farmers will not be allowed to go in vain. Our respects to those who have paid with their lives,” he added.

Note: This is a developing story and it will be updated as soon as new information is available.