The protest against the farm laws appeared to be losing steam after the farmers’ Republic Day tractor parade, but an emotional appeal by BKU leader Rakesh Tikait revived it. 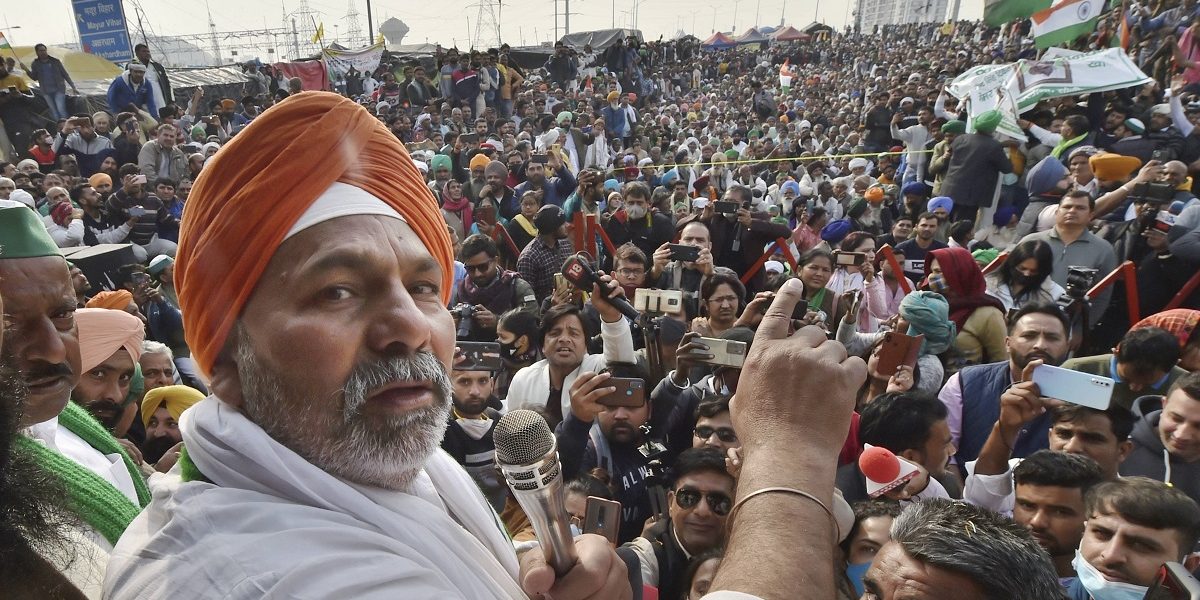 Baghpat: The ripples of farmers’ protest against the new agriculture laws on Delhi’s borders spread further in western Uttar Pradesh with thousands of people converging for a mahapanchayat on Sunday in Baghpat, the third such congregation in the region in as many days which resolved to lend support to the ongoing peasants’ stir.

The sarv khap mahapanchayat took place at the tehsil ground here with farmers pouring in from nearby districts, some in tractor-trollies, many of which have the tricolour and farmer unions’ flags.

This is the third mahapanchayat of farmers in the region after a massive congregation in Muzaffarnagar on Friday and in Mathura on Saturday, both resolving to support the ongoing Bharatiya Kisan Union-led protest at the Ghazipur border against the three new farm laws.

Bharatiya Kisan Union (BKU) leader Rajendra Chaudhary told the crowd the movement has to be continued with full strength.

The mahapanchayat is also deliberating on the January 26, 2021 police action against farmers protesting in Baghpat district against the new central farm laws, a local Baraut resident who attended the event told PTI.

A khap is a traditional social council representing a community or a region in parts of north India with a Chaudhary as its titular head.

Before announcing the culmination of the mahapanchayat in the evening, Desh Khap chief Chaudhary Surendra Singh told the crowd to understand the situation, start moving to Delhi’s borders and ensure full support to protests at Ghazipur and Singhu.

Brajpal Chaudhary, another Desh Khap leader, said the fight was now for the prestige of farmers.

The police and administration are trying to suppress the movement by force, but it won’t end until the new laws are repealed, he said.

Chaudhary Haripal Singh expressed happiness over the large turnout for the farmers’ congregation as did several other local leaders who spoke at the mahapanchayat.

He added, whatever happens, we will respond with non-violence and not violence. Our leaders at protest sites and our panch [leaders of the panchayat] will make decisions and we all will follow them.

Additional district magistrate Amit Kumar and additional superintendent of police Manish Mishra also reached the venue and expressed regret over the forceful eviction of protestors in Baghpat on January 27, 2021.

The protest was being held against the new central farm laws at the Delhi-Yamunotri National Highway here, prompting khap leaders to convene Sunday’s mahapanchayat.

The two-month-long protest against the farm laws appeared to be losing steam after widespread violence during a tractor parade by farmers on Republic Day, but an emotional appeal by BKU leader Rakesh Tikait gave it a fresh lease of life with thousands of farmers gathering at the Gazipur protest site and the mahapanchayats from western UP extending support to the stir.

The farmers, mostly from Punjab, Haryana and parts of UP, have been protesting at Delhi’s borders with Haryana and Uttar Pradesh, demanding a rollback of the Farmers’ Produce Trade and Commerce (Promotion and Facilitation) Act, 2020, the Farmers (Empowerment and Protection) Agreement on Price Assurance and Farm Services Act, 2020 and the Essential Commodities (Amendment) Act, 2020.

The protesting farmers have expressed apprehension that these laws would pave the way for the dismantling of the minimum support price system, leaving them at the mercy of big corporations.

However, the government has maintained that the new laws will bring better opportunities to farmers and introduce new technologies in agriculture.