Behind Rajasthan Farmers' Burial Protest, a Story of Bitterness Over Forced Land Sale

Land owners as well as builders have been affected by the Jaipur Development Authority's botched up housing project.

Women have also joined the protest 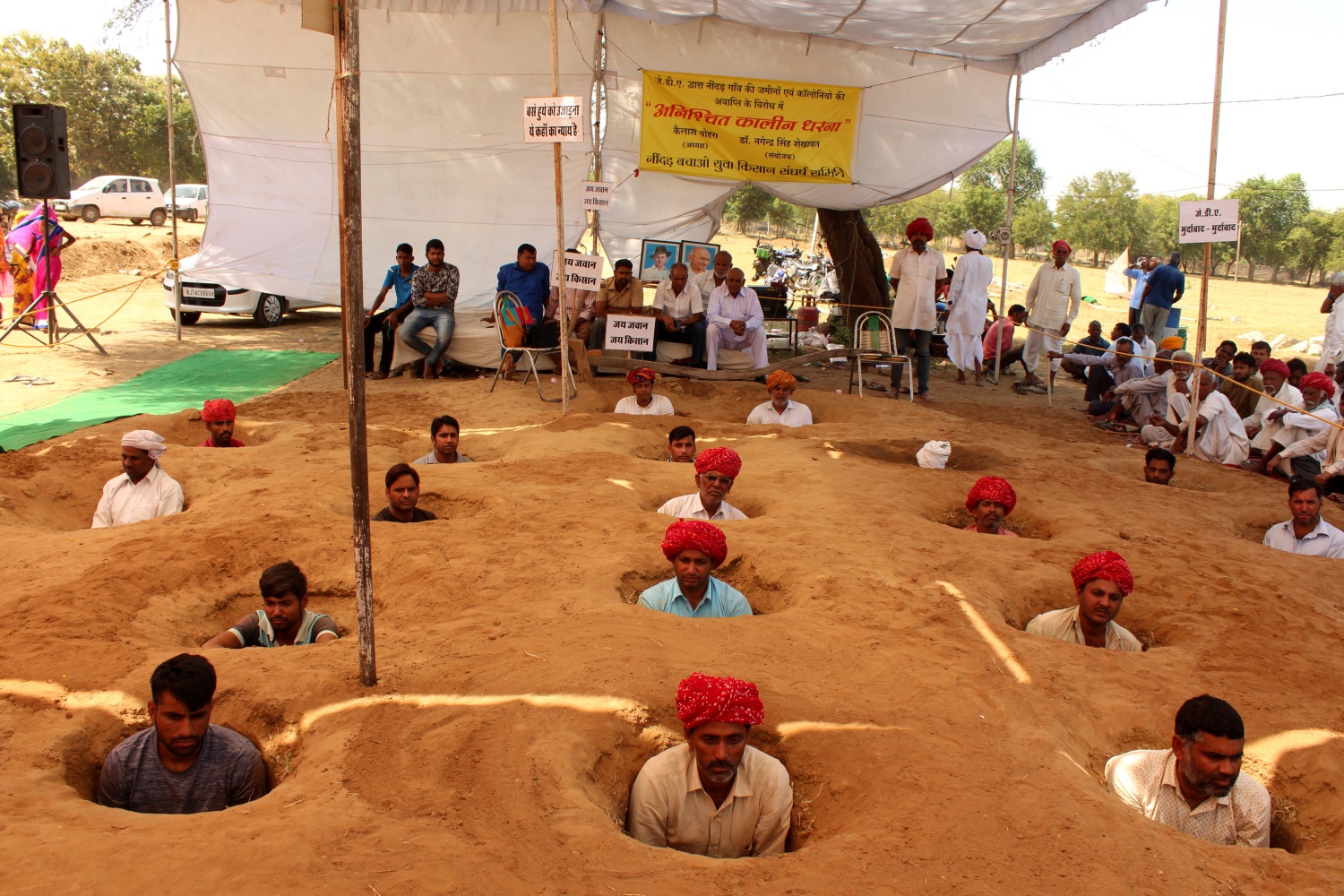 Land acquisition for the project began in 2010 when a notification was first published in newspapers; subsequently awards were issued in 2013 to those who surrendered their lands to the authority. At present, about 274 bighas of land have been surrendered to JDA.

“We went to the then chief minister Ashok Gehlot with our concerns for the project and he assured us that the land will not be acquired but the same year the Vasundhara Raje government came to power. We are here to save our lands from the forceful land acquisition without consent from 80% of the affected people,” Nagendra Singh Shekhawat, leader of the Zameen Samadhi Satyagraha told The Wire.

A case was filed against the acquisition by Gemini farms, along whose land a 200-foot-wide road was to be built for the project, but the high court gave its judgment in favour of  theJDA in July 2017. The JDA began constructing the road from the farm’s premises on September 16, after which, the owner managed to get a month’s stay from the court, since the construction began before the compensation was paid to him by the JDA.

The locals protested for 15 days against the move starting September 16 before organising their own mock burials on October 2.

The protesters are not in favour of giving their land for the project, saying that the survey has not taken note of their lands. Some have alleged that the JDA officials intimidated them to surrender their lands.

“My house is attached with the farm but the jamabandi (land record) has no mention of this. They have made my residential investment zero. Even our land is mentioned as barani (rainfed) when we cultivate both rabi and kharif crops,” said Nathuram (35), a land owner who has leased his land and works as a welder in the Vishwakarma Industrial Area in Jaipur.

“I’ve lodged an FIR against the JDA officials for forcing me to surrender my land. They said, court mein bhago par tumhari zameen nahi denge ab wapas (run to court but we won’t give your land back),” Gopal Kumawat (52), a resident of Nindar told The Wire. 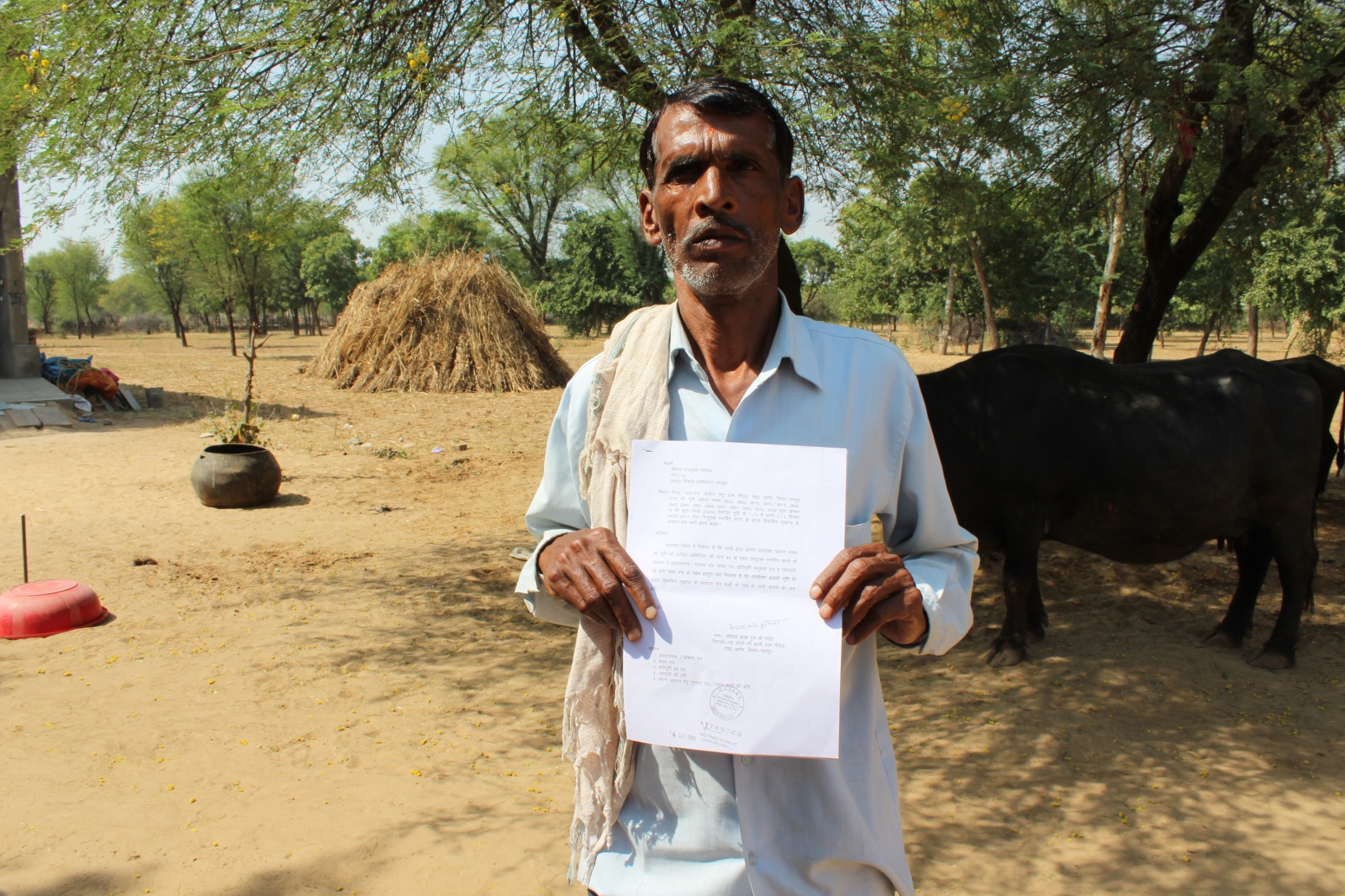 “We are eight brothers. They have been asked to pay us compensation as per the 2010 district level committee (DLC) rates. We would hardly be able to manage with that amount. Also, we are not sure when the amount will come,” said Babulal, another resident.

Locals are left with only two options – to get compensation for their land at the 2010 DLC rates or surrender their land free of cost to attain 25% of the developed land from the project in proportion to the area of their land acquired and at a price equal to the cost of acquisition and cost of development.

“The offer of 25% development land can be profitable only if they give us land at a prime location, that is along the road, but there is no assurance from their side, Mahinder Singh, said a local resident whose is notified for acquisition.

Title of the land

Most of the affected families are not the titled owners of the land that will be acquired and hence are not even eligible for compensation. 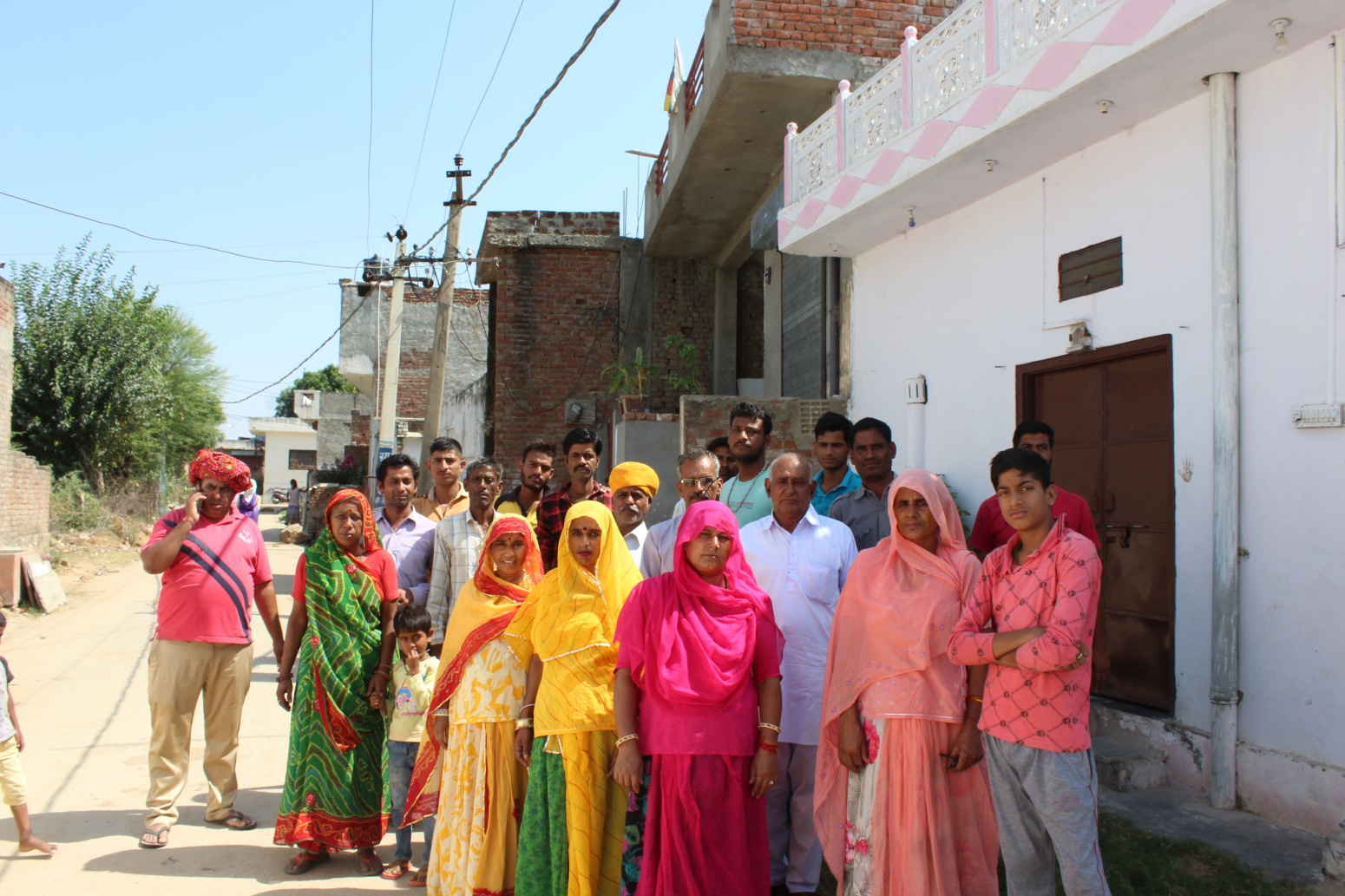 Residents of Anand Vihar colony in Nindar that is notified for acquisition. Credit: Shruti Jain

Of the 1350 bighas of land to be acquired, 150 bighas belongs to the mandir mafi for which the JDA has deposited Rs 60 crore in the court as compensation. However, years ago, the locals purchased the land from the priests on an agreement without any legal document. The people who are currently staying on that land are not the titled owners, which implies that the compensation would go to the priests who have already made money selling off the land, not them.

“We took the land from pandit ji on agreement but the house is not registered in our names. JDA has asked us to vacate our houses in which we have put all our savings and we won’t even get the compensation,” said Kajormal Kumawat (55), resident of Lucky Vihar Colony made on the mandir mafi land.

There are 18 colonies in the proposed project area, with a population of approximately 7,000 people. The colonies were built by the societies who purchased the land from farmers without proper legal documents and sold it to the locals without offering ownership of the land.

“JDA says our houses are illegal and we won’t get any compensation. Also, they asked us to pay for demolishing our houses,” said Ganesh Singh Tanwar, resident of Anand Vihar Colony in Nindar.

Lifetime tax on the offered land 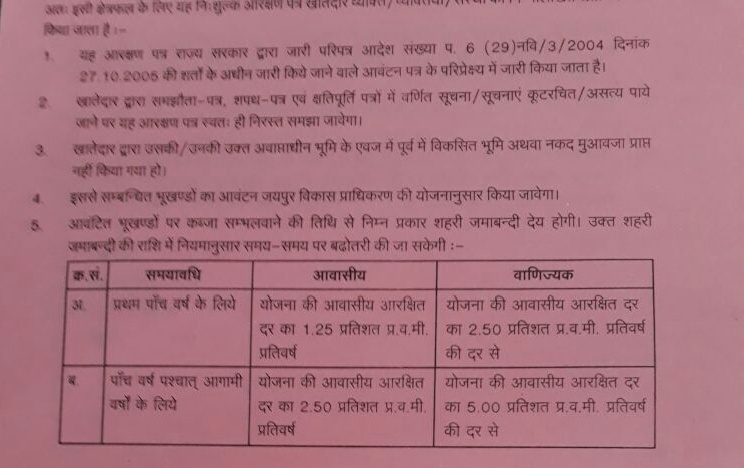 The awards issued to those who have surrendered their lands to the JDA in return for 25% developed land in proportion to their acquired land – 20% for residential purpose and 5% for commercial purpose – mention a tax of 1.25% per annum to be paid for the first five years and later 2.5% per annum for lifetime on the residential part.

“How do they expect poor people to pay this amount of money as tax? The strategy is to first grab the land and then compel the owners to sell their lands immediately,” said Reetu, a land owner in the area.

“It is we who are suffering, not the farmers. We have purchased the land from them but we are not sure whether that land will be ours or not. We are planning to protest against the JDA now,” Banshidhar Rundla, a property dealer based in Nindar told The Wire.

The representatives of the Zameen Samadhi Satyagraha are in talks with the JDA about re-surveying the land so that fair compensation is given to the affected families. They have demanded inclusion of their representatives as well as the collector in the survey committee.

Multiple attempts were made to contact the JDA commissioner, Vaibhav Galriya, for this story. His response will be added when received.