These Farmers Have Crafty Fixes to Beat Tamil Nadu's Drought

As Tamil Nadu faces one of its worst ever droughts, farmers and experts in the state share some organic, low-cost hacks.

As Tamil Nadu faces one of its worst droughts, farmers and experts in the state share some organic, low-cost hacks. 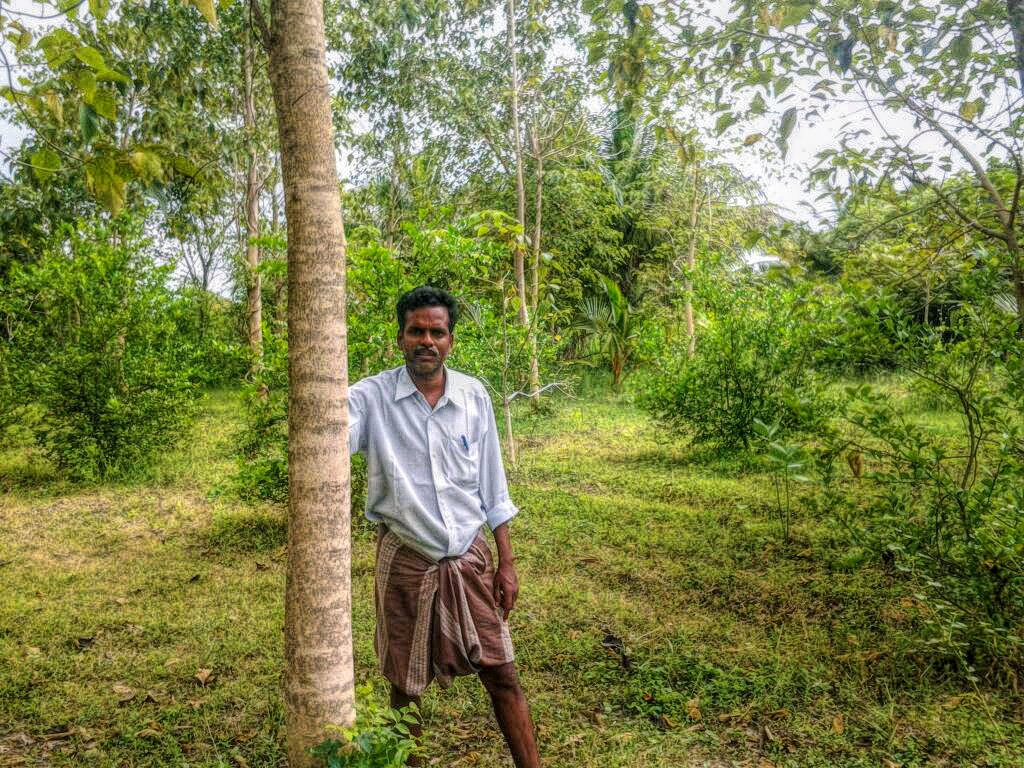 “Back in 1975, when I first visited a farm land in India, there was an old lady who came huffing and puffing, gesturing towards me. At first, I could not understand what she meant. Then I realised she was shooing me away. I had entered her farm, with my chappals (slippers) on. Since then, I have been walking barefoot in this land.” These are the words of Bernard Declercq, a Belgium-born farmer working in India.

In late 2015, Chennai and most of Tamil Nadu battled unprecedented rains and floods. Two years later, the state is fighting the most intense drought it has faced in 140 years. There are reports of increasing farmer suicides in the state. Some even held a series of protests in the capital demanding that the Centre waive their loans and interlink national rivers.

The principal problem here, of course, is water. This is no surprise. Tamil Nadu is one of India’s top groundwater guzzlers, with 142 of 385 blocks in the state recorded as ‘over-exploited’, where withdrawal happens faster than recharge.

Does the solution to the water and agrarian crises lie with farmlands? Are there ways to improve the water-use efficiency (currently 35-55%) of irrigation systems? Farmers and agriculture experts across the state share some low-cost natural and native farming hacks.

Solution for drought and loans

“Akka (sister), I’m going to Vanagam with my friends, do you want to join us?” asks my neighbour, an IT engineer who is around 20-years-old. Vanagam, an ecological institute in Karur district, is not a place you would associate with engineers or youngsters. But on the hot summer day we visited the informal farm school, the place was bustling with farmers, students, families, story-tellers and many others.

“The two main reasons for the sudden surge in suicides is primarily due to drought and loans,” Kumar went on. “In organic farming, we can find a solution for both. In Tamil Nadu, a majority of the farmers are inorganic who are dependent on external raw materials. They need to buy seeds, fertilisers, pesticides and machineries and, eventually, they end up taking a loan to spend on these inputs. Unable to fix the selling price, the farmers face heavy losses and when monsoon fails, their debts build up. Amidst the rising pressure, they commit suicide.”

According to him, organic farmers do better. “For them, everything comes from within the farm and with low cost inputs, they are able to sustain [their activities for] longer.”

Kumar claimed that organic farmers are also better equipped to handle the drought. They have to irrigate their farms only once a week because of the lack of chemical fertilisers.

Kumari is an organic farmer from Mugaiyur village, Villupuram, and has been farming for over 20 years now. “In 1996, when I met Nammalwar Ayya, I switched to organic farming,” he says. She, herself, has turned into an activist, converting over 100 farmers in the neighbourhood to organic farming. “I just show it to them instead of preaching. All they have to do is take one small portion of their land and try organic farming (trial plot) and compare it with their normal produce (comparison plot). Once they see the difference in the soil, output and the cost saved, they switch over.” She reveals that most of these organic practices have anyhow been a part of Tamil tradition. “For instance, in kidai madukkathal, we let sheep graze in turns in different parts of the land – this way, the sheep’s excreta is used to fertilise the entire land. And just before the rains, we take the yeri vandal (lake silt) and spread it across our lands to increase water absorption.  In organic farming, we are just going back to living in harmony with nature, like in the past.”

The water of well dug in the sand, though draw it forth, gushes still;
Though you irrigate with it, it gushes still; dam it up is it stayed?

Being in the rain shadow region and with no perennial rivers, Tamil Nadu has long been dependent on wells and tanks to irrigate its lands. A. Natarajan, 62, a native of Sanipati village in Sivagangai district recalls, “In the 70s, we used to have this tradition called Kudimaramathu, where villagers come together to de-silt the local irrigation tank so that the rainwater is effectively utilised. The silt taken is then applied on farm lands to increase water retention and soil fertility. Locals used to pool in money to maintain the local water bodies. The water bodies were usually of two kinds; while eris were used for irrigation, ooranis (small ponds) were used for drinking water.”

In fact, most villages had a neerkati (a water manager) who manage the eris, which are a series of cascading water tanks. This neerkati would decide which sluice to open up and which area has to be irrigated based on the crop and its needs. The water manager would then be paid in kind from the agricultural produce.

Dhan Foundation, an NGO based out of Madurai, has been reviving this tradition by setting up farmers associations called vayalagams. Replicating the traditional practice, each vayalagam has a water manager who decides how the water resource in each village is to be used. The villagers take collective ownership of the tanks and its maintenance. The NGO together with the locals have restored over 1500 defunct tanks across Tamil Nadu. P. Krishnamurthy, programme leader, Dhan Foundation says, “The ancient series of cascading tanks had great hydrological connectivity and our forefathers made sure that every drop of water is used. While some of the restored tanks and ooranis (ponds) have been used for irrigation, some have been restored for enabling groundwater recharge.” 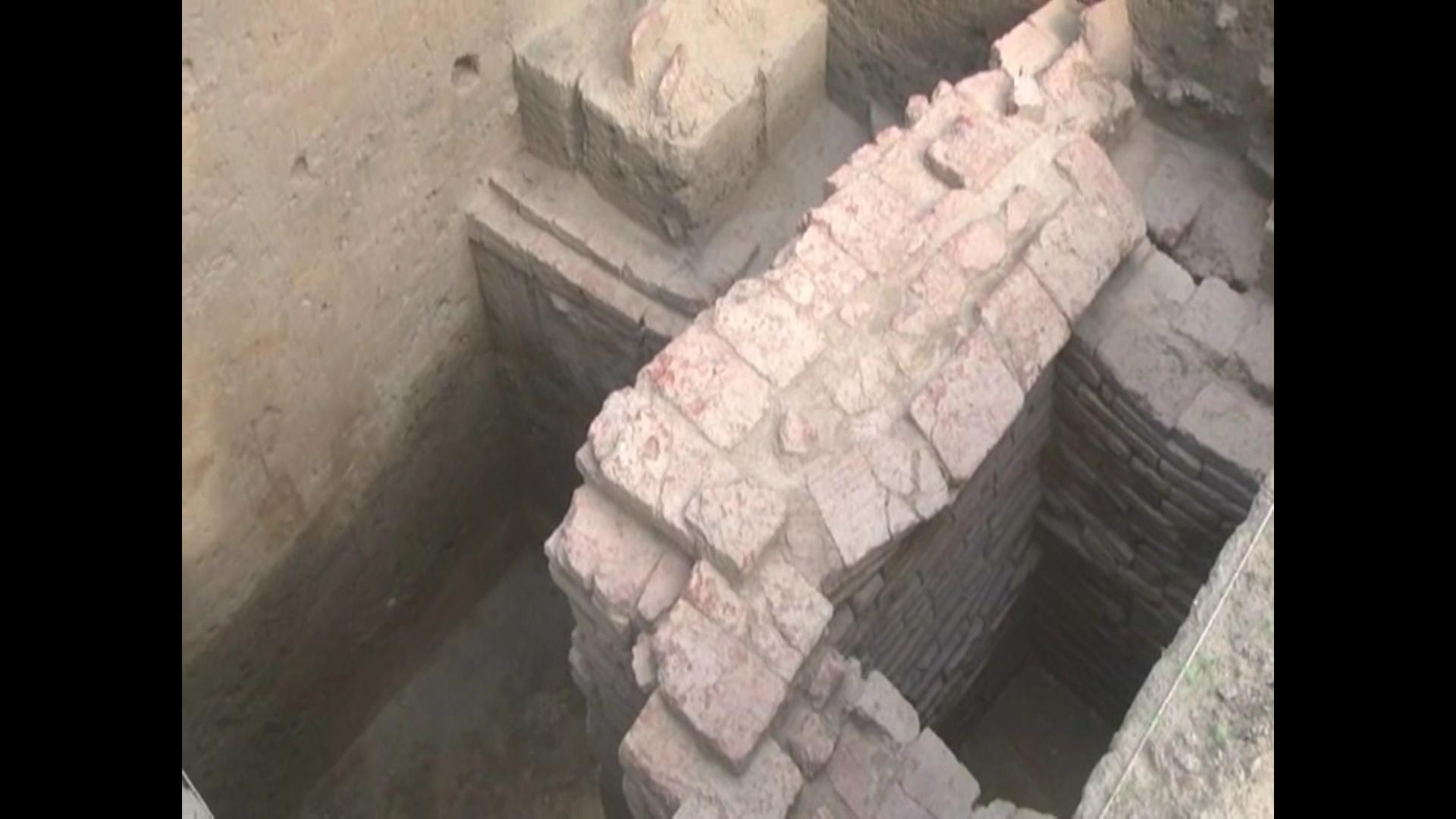 This year, owing to the severe drought, Krishnamurthy concedes that they have seen only pockets of success. But Himanshu Kulkarni, water expert and founder of the Advanced Centre for Water Resources Development and Management, agrees that such community management of water is the way forward in the long run. He says, “the problem is in the perception that we have unlimited supply of water. We cannot have 100 farmers use 100 different bore wells.” He blames ignorant usage of water for the current scenario.

On the borewell conundrum, Sekhar Raghavan, 70, director, Rain Centre explains, “groundwater is available in two discontinuous layers – separated by hard rock, one shallow water source above and a deeper source beneath the rock. 50 years back, we were only tapping the shallow source through open (dug) wells. When the wells went dry, we migrated to bore wells. We need to understand that the shallow wells are the sustainable ones and have a chance of coming back. Dug wells are the ones you can use as both deposit (to recharge water) and withdrawal counters.” He reiterates that it is also important to revive traditional water systems likes eris, ooranis and that it will be a good practice to let the community take over their management.

This February, the arid Ramanathapuram district which has over 1,077 tanks saw the revival of Kudimaramathu by the district administration, which means the public will be allowed to clean the tanks and supply channels and take charge of the water stored.  The district police of Ramanathapuram have already jumped in the wagon to desilt at least 20 ponds across the district.

Apart from fresh water, also known as blue water, it is also necessary to look into the effective use of green and grey water. Green water is the soil moisture that is used by the plants. Kumar declares, “We should realise that plants just need moisture and not water. By using techniques like mulching (compost spread on the ground) and mettupaathi (raised bed farming), one can ensure that soil moisture is retained.” Even the harvest cycle is planned to use this green water effectively. It is a common practice in the state to sow ulundu (black gram) after paddy, as it can survive in the leftover moisture. “Grey water, that is used in bathrooms and kitchen, can be effectively recycled and used for agricultural purpose, “ says Shaktivel K., 26, founder, Rainstock, Madurai. “It is just the mindset of the people that has to change, if one farmer sets an example, others will follow suit.” Rainstock has successfully implemented natural reed systems in community centres to recycle grey water for gardening.

Similarly, in Sristi, a farm school that caters to mentally challenged brethren in Thazhuthali village, Villupuram district, grey water from washrooms is recycled naturally. They use two local plants species (canna, reed) and a indigenous swale system for cleansing. This water is then manually pumped to water banana plants in their farm. “We do not want to buy water outside hence we have set up our own farm ponds, wells and the indigenous grey water recycling system to save more water,” says Karthik, 36, founder and farmer, Sristi Village. 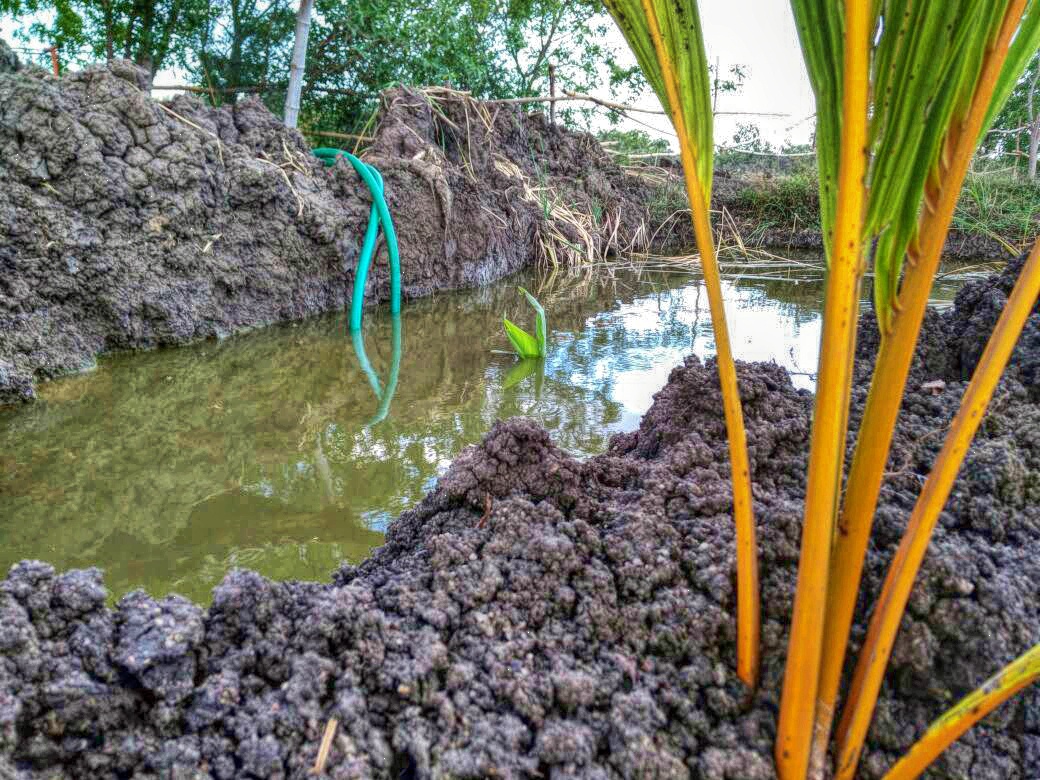 There’s one another obvious way to bring more water and rain: planting trees. With nearly 40% of land in the state being used for agricultural purpose, it only makes sense to use farm lands to plant more trees. A study by Institute of Forest Genetics and Tree Breeding recorded that Tamil Nadu has seen a positive growth in agroforestry between 2010 and 2013, with an average of 5,000 hectares of farm lands used for tree cultivation.

Thanga Kannan, 40, an organic farmer from Senthankudi, Pudukottai District is a happy man, “I have flowers, sandal, teak, pepper and coconut trees in my land. Instead of mono-cropping and relying on one harvest for sustenance, it makes more sense to use one land, and single irrigation to get various produce. This way, water is effectively used, the mulch from the trees fertilises the crops below and it is also financially safe.” The best part is that he has managed his entire farmland without spending a penny on fertilisers or pesticides, “I use eruka elai (crown flower plant), meen kalivu (fish waste), veppam kottai (neem seed) instead.”

Apart from multi-purposing a single water resource, he shares another drought-survival tip, “The other day, my neighbour called to inform me that his paddy crops had withered but a day later, they had risen. Somehow, our parampariya nel (traditional paddy) are more drought resistant. Hybrid seeds definitely give better yields but in the long run, we find that our native crops survive better.”

When you work with nature, nature works for you and nobody can give a better testimony than Bernard from Auroville. In his Pebble garden, he and his wife Dipika have revived eight acres of severely eroded land and turned it into an agro-forest with over 100 traditional endangered vegetable varieties, food crops, medicinal plants, indigenous trees etc. 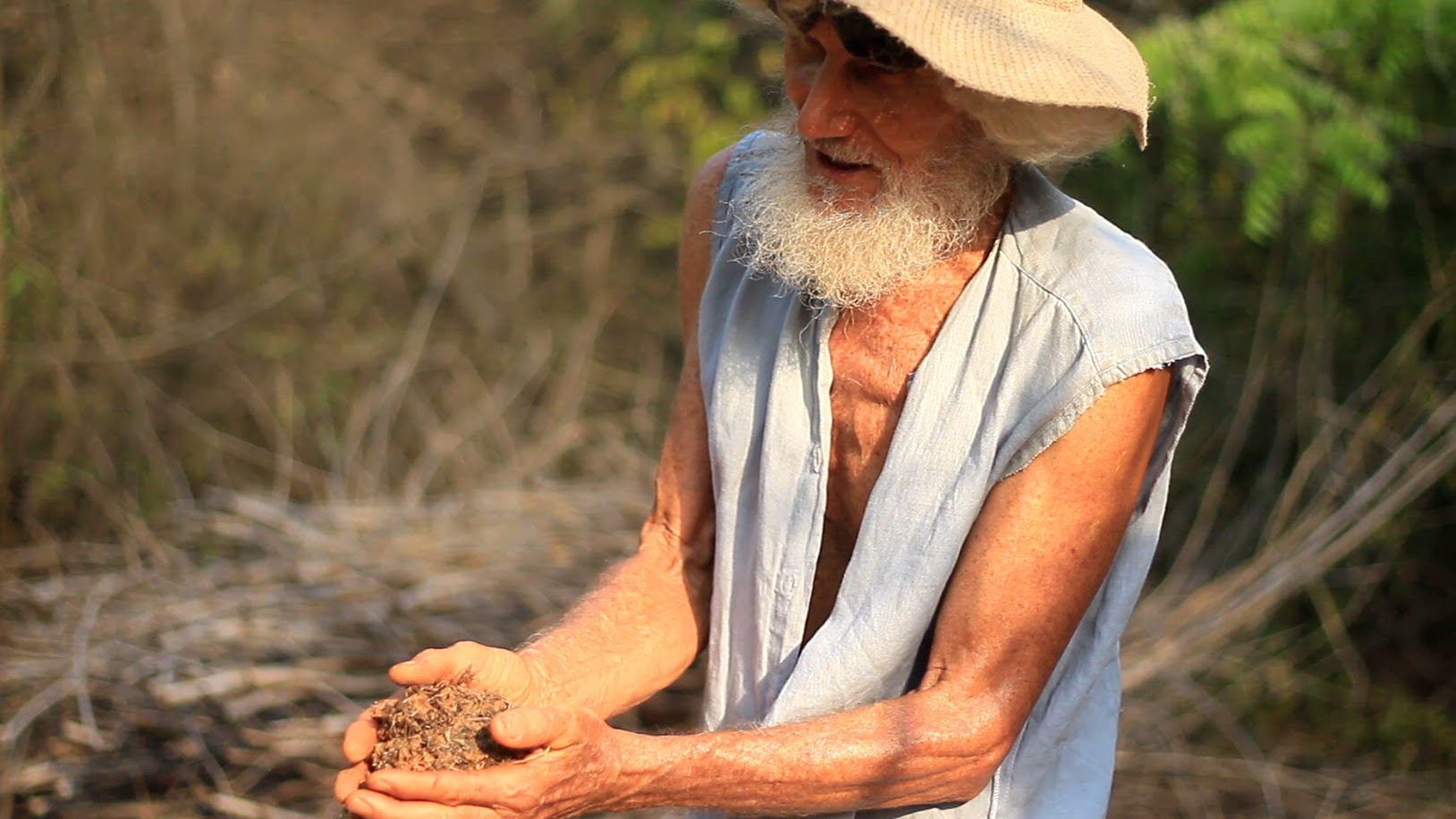 So, how did the couple manage to grow an agro-forest that once was an arid land? Bernard reveals his all-natural farm fix, “I use termites as farm labourers. They do a wonderful job of mixing mineral matter like soil and organic particles like leaf litter and build layers of rich soil. We use this soil to grow our trees.” The couple have even managed to replicate this natural process using activated charcoal to build their own garden soil. These termites dig macro-pores allowing rain to seep into the soil thereby preventing runoff or evaporation, saving precious water.

Our water is fast drying up and looks like nature might have found us the best loopholes yet.