Farmer leaders also called on the Union government to resume talks with them to address their pending demands. 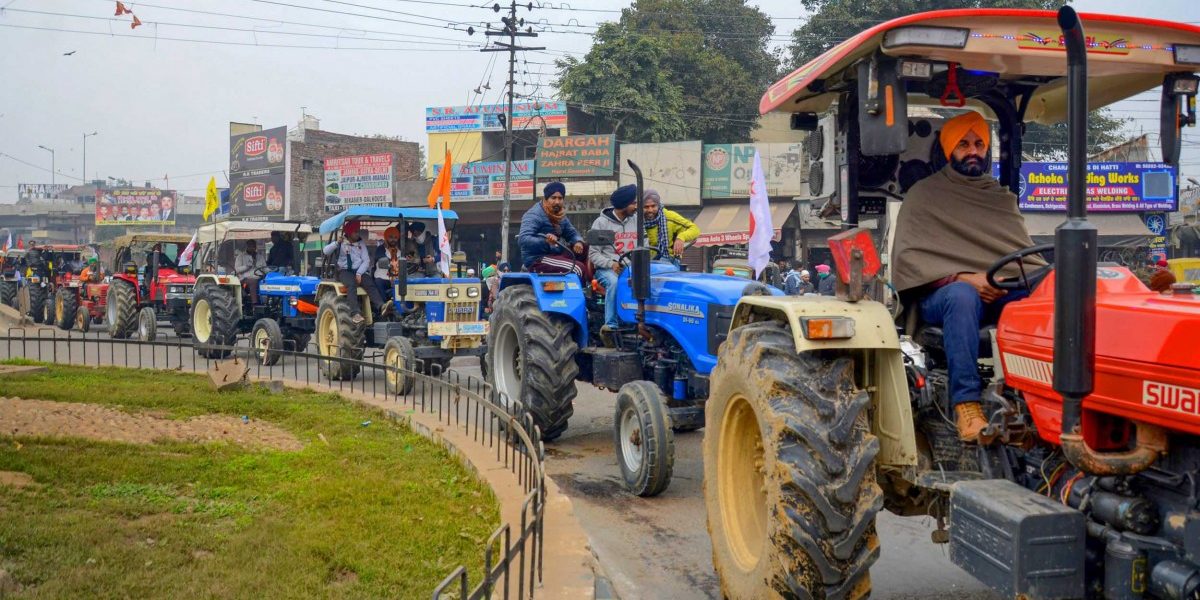 File image of farmers on a tractor march during a protest against the farm laws, in Amritsar, Friday, January 22, 2021. Photo: PTI

New Delhi: The Sanyukt Kisan Morcha (SKM) has suspended its November 29 tractor march to Parliament and will hold a meeting next week to decide its future course of action, farmer leaders said on Saturday.

Addressing a press conference following a meeting of farmer unions at the Singhu border protest site, the farmer leaders also called on the Centre to resume talks with them to address their pending demands.

SKM leaders asserted that the farmers’ agitation will continue until their demands for a legal guarantee for Minimum Support Price (MSP) and withdrawal of cases against farmers, among other things, are accepted by the government.

The SKM’s decision to suspend the march comes two days ahead of the commencement of Parliament’s Winter Session, during which a bill to repeal the three farm laws, against which thousands of farmers have been protesting for the past year, will be introduced by the government.

“We are suspending the Parliament march on Monday,” SKM leader Darshan Pal said.

“We had written to the prime minister seeking the withdrawal of cases registered against farmers, allotment of land for building a memorial for farmers who lost their lives (during the agitation against the farm laws), sacking of Ajay Mishra ‘Teni’ from the Union Cabinet over the Lakhimpur Kheri violence, along with other issues,” he said.

The SKM will hold its next meeting on December 4 to analyse the government’s response to its letter to the prime minister and decide the next course of action accordingly, he added.

On November 21, the SKM wrote an open letter to Prime Minister Narendra Modi putting forth six demands and seeking immediate resumption of talks with the government over these.

The demands include a legal guarantee for MSP, withdrawal of cases registered against farmers during the agitation and for stubble burning, building a memorial for the farmers who lost their lives during the protest, withdrawal of the Electricity Amendment Bill and the removal of Union Minister of State for Home Ajay Mishra, whose son is an accused in the Lakhimpur Kheri violence.

Last week, Modi had announced that the three farm laws would be withdrawn. However, the farmer leaders have maintained that the protesters won’t budge until their remaining demands are met.

Farmer leader Rajveer Jadaun said, “The most important thing is that the government should talk to the SKM instead of airing its announcements through media. MSP is the most important issue. Without a legal guarantee for it, the agitation will continue.”

In a statement, the SKM, an umbrella body of farmer unions protesting the farm laws, said it has taken cognisance of the “lack of response” from the prime minister to its letter dated November 21 and it calls upon the government to restart the dialogue process and discuss the pending issues.

It also accused the government of trying to “bypass” bilateral discussions and “sidestep” crucial issues.

“In a democracy, it is the duty of the elected government to consult the protesting farmers and resolve the disputes amicably,” it said.

Earlier in the day, Union Agriculture Minister Narendra Singh Tomar said the Centre has agreed to the farmers’ demand for decriminalising stubble burning and urged them to end their stir.

In an official statement, Tomar said the other demand of farmers was for a discussion on MSP and crop diversification. This demand would also be fulfilled with the setting up of a panel, as announced by the prime minister on November 19 on the day of Gurupurab.

The SKM said over 100 organisations will hold a massive ‘Kisan-Mazdoor Mahapanchayat’ under the banner of Samyukta Shetkari Kamgar Morcha (SSKM) at Azad Maidan in Mumbai on Sunday.

The ‘mahapanchayat’ will witness a massive gathering of farmers and workers from across Maharashtra and will raise the demands of the farmers’ movement, it said.

Thousands of farmers, especially from Punjab, Haryana and parts of Uttar Pradesh, have been protesting against the three farm laws at Delhi borders since November last year. The agitation completed a year on Friday.