The Samyukta Kisan Morcha expressed concern over making those who supported the now-repealed farm laws part of the committee and called it an attempt to bring back repealed laws through the backdoor. 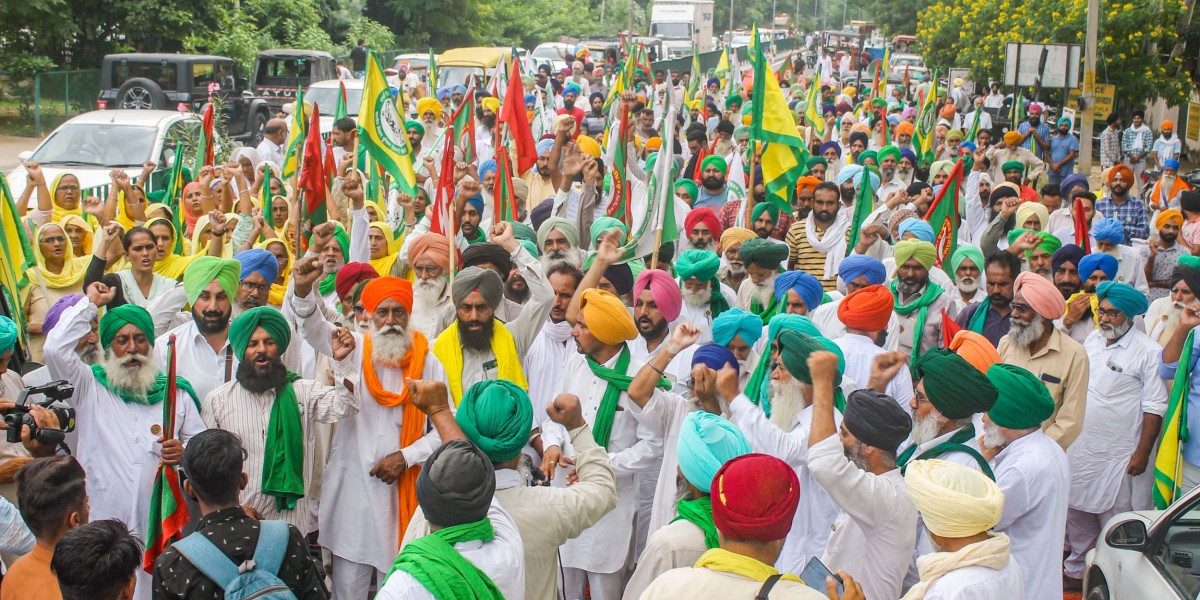 Farm leaders and farmers stage a protest over violence in Lakhimpur Kheri on Sunday, in Patiala, Monday, Oct. 4, 2021. Photo: PTI

New Delhi: The Union government on Monday, July 19, formed a committee on minimum support price (MSP), eight months after it promised to set up such a panel while withdrawing the three contentious farm laws.

However, the Samyukta Kisan Morcha, an umbrella body of farmer unions, on Tuesday, July 19, rejected the government’s committee on minimum support price, saying “so-called farmer leaders” who supported the now-repealed farm laws are its members.

Former agriculture secretary Sanjay Agrawal will be the chairman of the committee.

The government has made a provision to include three members from Samyukta Kisan Morcha (SKM) as part of the committee but the farmers’ organisation has so far not given any names to be part of the panel.

Under the umbrella of SKM, thousands of farmers had held around one year-long agitation at Delhi borders and forced the government to withdraw the farm laws.

While announcing the repeal of three farm laws in November last year, Prime Minister Narendra Modi had promised to set up a committee to discuss the farmers’ demand for a legal guarantee on MSP.

The agriculture ministry issued a gazette notification announcing the setting up of a committee in this regard.

Two members of the farmers’ Cooperative and group include IFFCO Chairman Dilip Sanghani and CNRI General Secretary Binod Anand are also part of the committee.

According to the notification, the committee will look at ways to make available MSP to farmers by making the system more effective and transparent.

It will also suggest the practicality of giving more autonomy to CACP that fixes the MSP of Agri crops, and measures to make it more scientific.

Further, the panel will look at ways to strengthen the agricultural marketing system as per the changing requirements of the country to ensure higher value to the farmers through remunerative prices of their produce by taking advantage of the domestic and export opportunities.

Besides MSP, the committee will look at ways to promote natural farming, crop diversification, and micro-irrigation scheme and suggest strategies for making Krishi Vigyan Kendras (KVKs) and other Research and Development institutions as knowledge centres.

Among other things, it will also suggest the practicality of giving more autonomy to the Commission for Agricultural Costs and Prices that fixes the MSP of agricultural crops and undertake measures to make it more scientific.

‘Attempt to bring back repealed farm laws through the backdoor’

Rejecting the panel, SKM leader Abhimanyu Kohar said, “Today, we held a meeting of non-political leaders of Samyukta Kisan Morcha. All leaders rejected the government’s panel. The government has inducted so-called farmer leaders in the panel who didn’t have anything to do with our agitation against the three farm laws at the Delhi borders.”

Kohar said the government had also made some corporate people members of the MSP panel.

The farmer leader said that the SKM would issue a detailed statement on its stand by Tuesday, July 19 evening.

Farmer leaders from Punjab and Haryana too have expressed apprehension about the committee alleging that the government wants to bring back the repealed farm laws through the backdoor.

Farmer leaders felt the committee should have limited itself to the issue of MSP while other topics such as ways to promote natural farming and crop diversification among others could have been dealt with separately.

“Only a formality has been done by forming this committee. Our fight for a legal guarantee to MSP will continue. Our demand was for a separate panel on the MSP issue,” he said.

Dhaner also alleged that some members, who are part of the committee, had earlier supported the three farm laws. “It seems the government again wants to bring back the farm laws through the backdoor,” he said.

Haryana BKU (Chaduni) chief Gurnam Singh Chaduni said the farmers had demanded a committee on MSP, “but many issues like crop diversification, etc. have been connected to dilute the MSP issue”.

He, too, echoed Dhaner saying people who had openly advocated the farm laws were on the committee.

“It seems the government wants to bring back the farm laws through the backdoor again… We (BKU-Chaduni) boycott this committee,” Chaduni said.

Rajya Sabha MP Raghav Chadha, also the chairman of a temporary committee to advise the Punjab government on matters of public importance, alleged the central government’s committee “is the latest example of BJP’s cynical and shortsighted bungling on agriculture, as the disastrous dispensation learns no lessons”.

He also objected to the exclusion of Punjab institutions and state government representatives from the committee. “By deliberately excluding Punjab, the central government has insulted our people,” Chadha tweeted.

“Clear evidence that the BJP cannot lead India in a unified manner, especially on issues important to its farmers. It’s clear as day why making MSP ‘effective’ is on the table, but legal guarantee for minimum MSP is not,” Chadha said.

Bharti Kisan Union (Lakhowal) general secretary Harinder Singh Lakhowal said there were several apprehensions regarding the committee. “It is not clear what the committee’s scope is… We don’t think this committee can work on MSP,” he said.

However, Guni Parkash from Haryana, a farmer leader who is a member of the committee, said all the apprehensions raised by the other farm leaders will be discussed by the panel.

He said MSP was not the only issue the farmers were facing and many connected issues such as crop diversification and promoting natural farming were among the ways to strengthen agriculture.