While most farmers and farm land are from rainfed areas, the government focuses only on irrigated areas. How long will this unfair treatment continue? 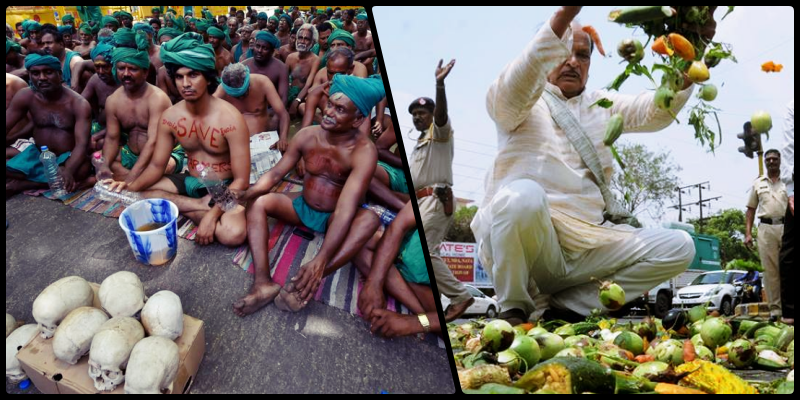 After an intense period of farmers’ agitation, the Maharashtra government has announced a loan waiver. Madhya Pradesh continues to simmer. Tamil Nadu farmers have expressed their distress in no uncertain terms. The loan waiver will probably make the farmers feel relieved for now, but the pivotal question remains – is this public investment in agriculture?  To understand the farmers’ distress, let us first try to understand the present scenario of public investments in agriculture and then imagine the type of support that logically follows from them.

About 55% of India’s gross crop area is rainfed. Rainfed does not imply low rainfall. The rainfed area accounts for 48% of area under food crops and 68% of area under non-food crops. Out of the total amount of crop loan, a major share goes to irrigated commercial crops and a small slice is taken by small and marginal farmers in rainfed areas. It is important to remember that most of the rainfed area is populated by small and marginal farmers.

Millets, pulses, oilseeds, cotton and many other crops are grown in rainfed areas, while irrigated areas are dominated by wheat, sugarcane and vegetables. But procurement under minimum support price (MSP) is dominated by wheat and rice. Half of this is procured from Punjab and Haryana, and another 40% is procured from Andhra Pradesh, Uttar Pradesh, Madhya Pradesh, Chhattisgarh and Odisha. This shows that procurement doesn’t really take place in the other states. Moreover, for the period between 2003-04 and 2012-13, Rs 540,000 crore was spent on wheat and rice, and only Rs 3,200 crore was spent on the procurement of coarse cereals and millets.

In addition to crops, livestock is an important feature of rainfed areas. Dairy cattle is mostly found in irrigated areas, whereas smaller animals like sheep, goats, fisheries and poultry are found more in rainfed areas.

These numbers together tell a story. Rainfed and irrigated areas serve very different functions, but the agriculture ministry is only geared towards irrigated areas and neglect rainfed ones. Other than MSP and small loans for kharif crops, there is not much government support to rainfed-area farmers. Hence the demands also are largely based on these familiar support forms from the government.

An in-depth study of the present agriculture landscape shows more effective ways of reaching out to farmers in rainfed areas. This, however, would require a reorientation of the agriculture ministry, and the formulation of new policies and programmes. It is time that the government responded to the agrarian crisis by understanding the scenario, instead of relying on quick fixes like loan waivers.

The numbers make it obvious that the support for the MSP is just for a couple of states and for two crops. There is a strong case for MSP for coarse cereals and millets. The procured grains need to be utilised as subsidised food under the National Food Security Act, as part of the public distribution system, in integrated child development centres, for mid-day meals in schools and for children in tribal residential schools.

Right now, wheat is being imposed on the non-wheat-eating population, which is a majority. Rice is grown in many parts of the country but the rice available in ration shops across the country is procured only from a few states. Isn’t this inherently inefficient?

Rainfed farmers have their coping mechanism – they have a diversified portfolio. They are into farming, livestock – especially small ruminants – forest produce, agri-labour, migration and more such avenues, since none of these provide steady, adequate income, year after year. The present livestock programmes of the government do not cater to this segment, but are meant for farmers who want to make livestock rearing their primary enterprise. So, small projects with low capital investment but high emphasis on training of farmers, would be appropriate for rainfed area farmers. For instance, backyard poultry, small fish ponds, or just a few goats. This could provide additional earning, as well as diversify risk.

Drought is another factor that reduces the economy of rainfed areas to shambles. Though the impact is very strong, there are known simple and inexpensive solutions. Protective or critical irrigation to overcome drought for Kharif crops is crucial. Just providing water four times during the Kharif crop can assure that the produce of the entire season does not get wiped out. This is possible through public investments in small water storage structures, and enhancing ground water levels. Watershed treatment, a proven technology solution, has not been implemented by the government.

Public investment in agriculture comes in the form of fertilisers, pesticides, water, power, seeds, and research. Water and power are obviously not meant for rainfed areas, and roughly, one-third of the other investments go into rainfed areas. Obviously there is not just a tilt but complete bias towards irrigated areas.

When most farmers and most farm land are from rainfed areas, how long can the government treat them so unfairly? This need not continue. There needs to be a serious shift of gears to address the ongoing agrarian crises, otherwise there will be more and more agitated farmers every few years. The politics of farmers’ agitation needs to be countered by new policy orientation, coupled with good governance in the agriculture ministry.

Note: All facts and figures are based on Revitalising Rainfed Agriculture Network’s working papers and data briefs.

Ashwini Kulkarni is founder-trustee of Pragati Abhiyan, a Nashik-based NGO.