The Last Night at Singhu

As tents were folded and tractors packed, some expressed cautious happiness while others were decidedly sad. 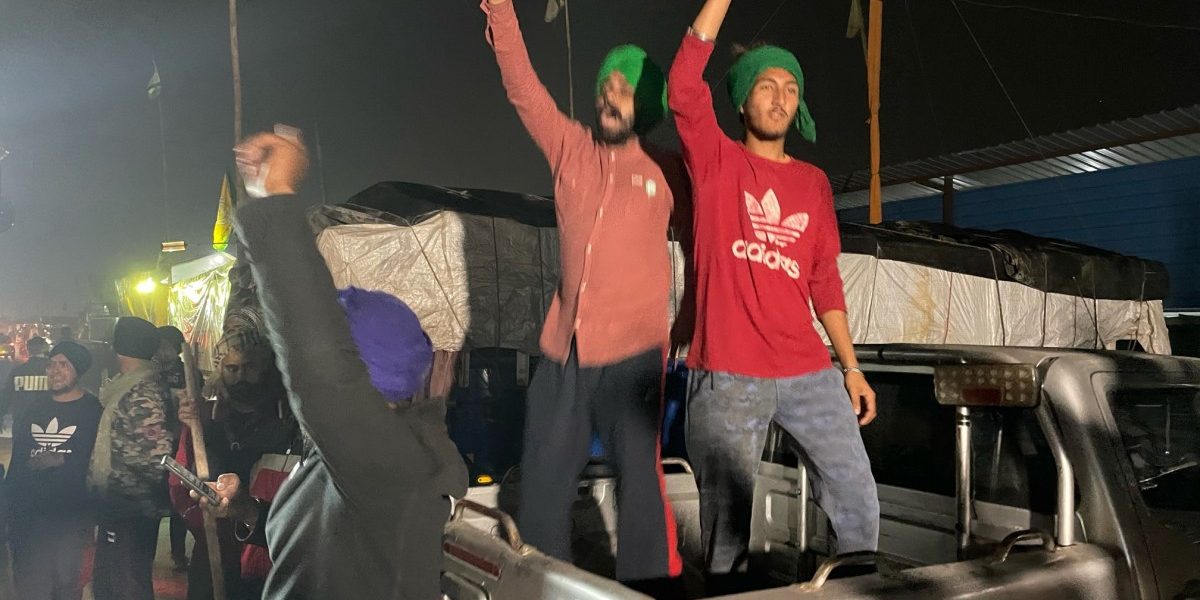 Protesters on a car on the last night at Singhu. Photo: Indra Shekhar Singh

Singhu: Yellow mustard flowers have bloomed near Singhu once again and robust green feral castor guards the roadside. But it was time for the farmers to leave Delhi. A year was up and the Narendra Modi government – barring the guarantee of Minimum Support Price as a legal right – has agreed to farmers’ demands. These include the assurance to withdraw cases against protesters, compensation for the families of those who have died, and so on.

After a three-hour metro-rickshaw-cab-ride, I found myself on a withered tarmac with some company.

A group of farmers were walking towards Singhu. Six people from Punjab and one older man, Mani Lal, from Sikar in Rajasthan.

“Punjab farmers have awakened the country to MSP, if they leave without legal guarantee, they will betray the nation,” said Mani. Suddenly, Tajinder, an Amristari farmer cut in, “We are aren’t going anywhere. If the leaders have taken a call, we should honour it. India will get MSP.”

Mani didn’t seem convinced. The road swerved unto a dusty trail passing an ebony sewage drain and overlooking a semi-ghetto but Mani’s questions kept us distracted. 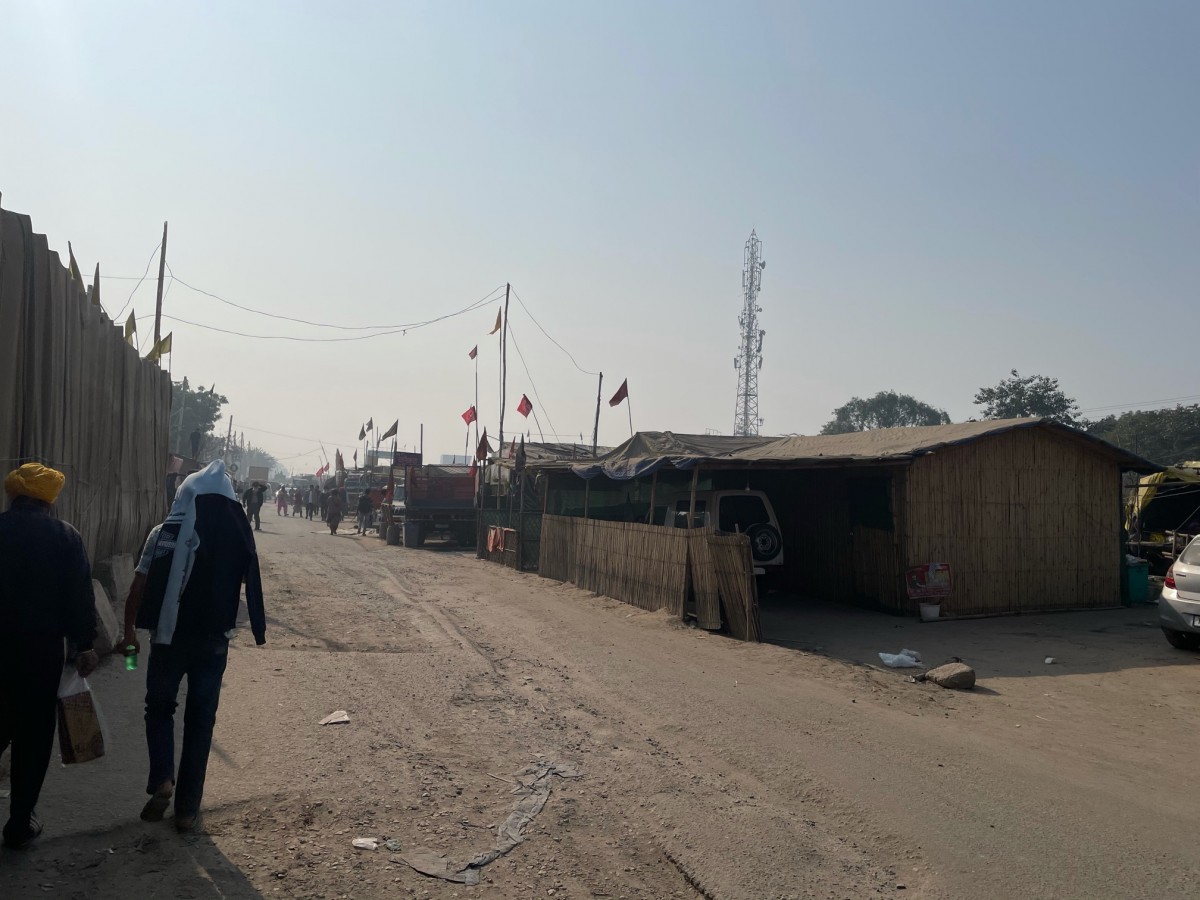 In no time, I was at the border. The police’s barbed wires and cements road blocks had still not been removed, but the green stage at Singhu was already being disassembled.

Farmer leader Balbir Singh had just finished his last speech, praising the farmers for the victory and admonishing Modi and “Ambani-Adani”. He requested all to leave the camps by the morning of December 11. But the question on MSP remained unanswered.

Evening was setting in, and hordes of tractors with youths and massive speakers were on the roads. A dancing frenzy was unleashed. Cameras were out, and flashes were lightning up the dark.

Soon the music dimmed and serious faces appeared. Inside each tent, farmers’ were cutting bamboo structures, iron rods and packing up their tents. Tractor trollies were being loaded, and farmers’ caravans were leaving. 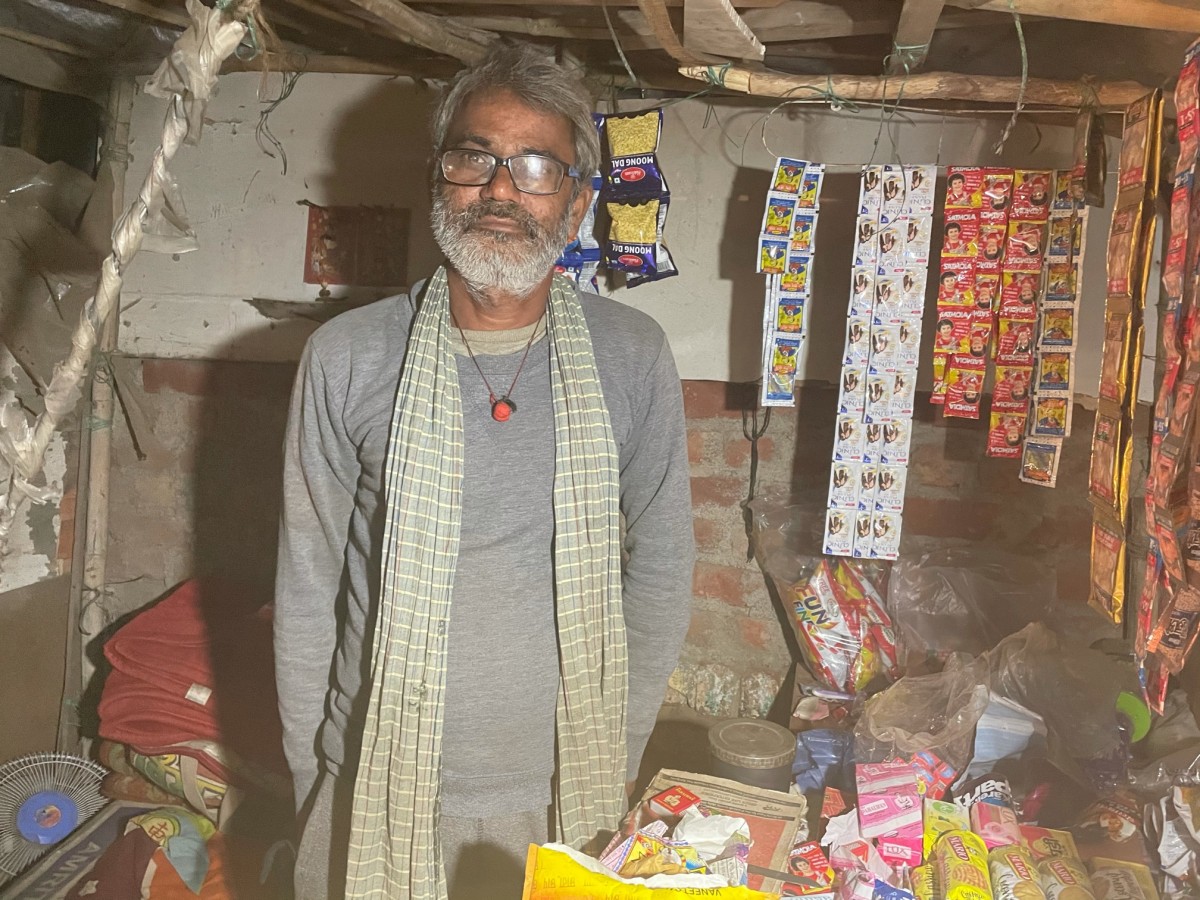 ‘But now I will be alone again, with my debt’. Photo: Indra Shekhar Singh

Amidst the bustle, I found a sad face – Pappu, a middle aged tea shop owner. His hole-in-a-wall tea stall was stocked with biscuits to omelettes and sweet confectionary. I ordered an omelette, he looked through his electric blue frame and our conversation began. “With the farmers gone, I won’t even earn Rs 600 a day. I had already stopped making tea, hoping that in the winter omelette and eggs sales will go up. But now all is gone,” Pappu said.

Pappu was among hundreds other local vendors, who have been dejected about the farmers’ return. “Business was going so well, I thought I could even repay my debts. But now I will be alone again, with my debt. I will be sad once the farmers are gone,” he said.

Pappu spoke about rising poverty, the Modi government, ration shortages and the police’s lathi charges. People kept coming in. In a year’s time, Pappu, a native of Kanpur, had learned and now spoke Punjabi.

It was now darker outside, the wind was cold, and my omelette was over. I had to leave for my tent – Ambedkar Students Library. This is a blue makeshift canvas-plastic structure, which houses books and budding journalists.

I was given a warm welcome and taken to special guest section. Here I found Sandeep Singh and Gurdeep Singh smiling. “People are now tired. This has been a long year and believe me it wasn’t always so energetic. In June and the August-September period, only a few thousands people were here. It was raining, and we didn’t even have enough hands to repair the damages,” said Gurdeep Singh, a MPhil student who is in charge of the library. 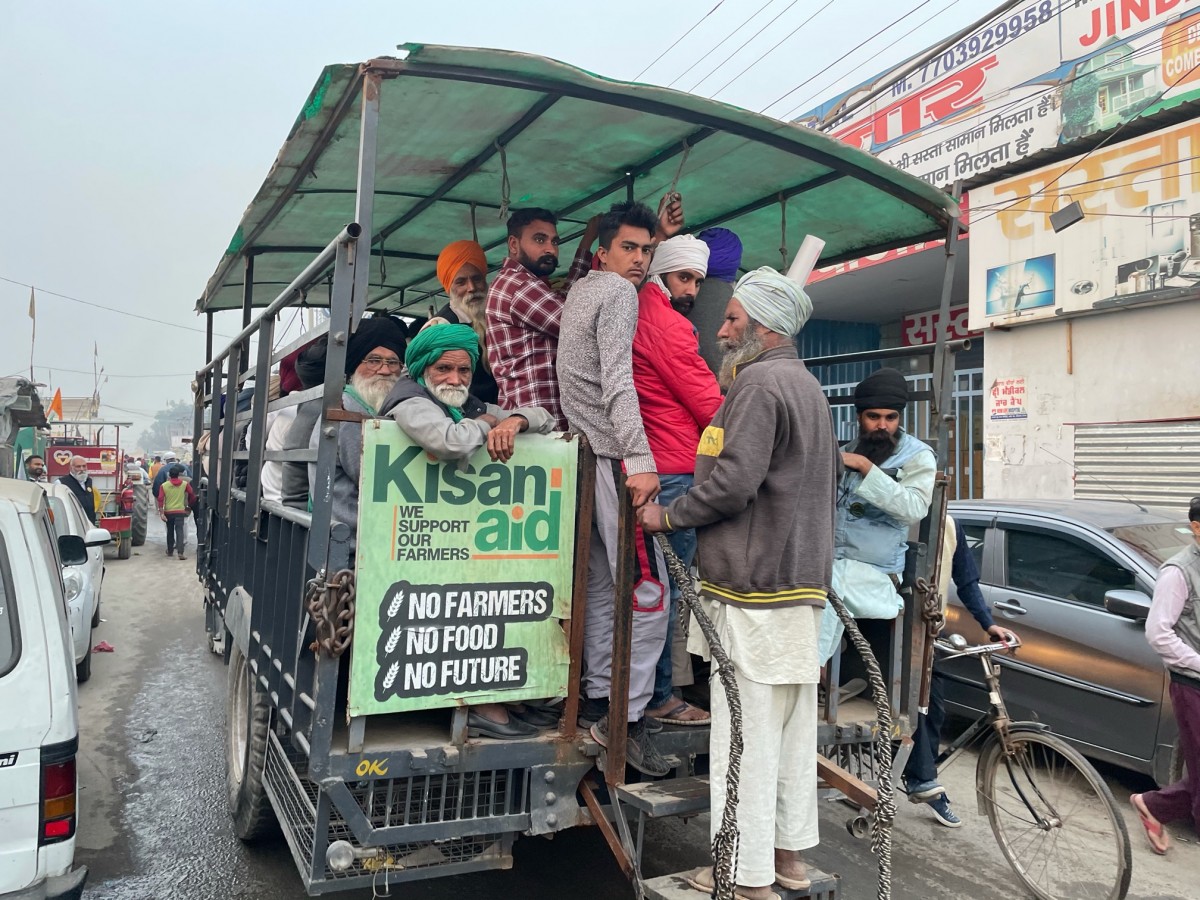 ‘It had been a tough year for many at Singhu. But all that appears over now.’ Photo: Indra Shekhar Singh

It had been a tough year for many at Singhu. But all that appears over now. The loud music and dances were still on. As Gurdeep chopped onions, we prepared for dinner when a journalist Manpreet Singh walked in with freshly cooked carrot and potatoes.

We eat heartily our last Singhu supper, huddled inside a tent.

We asked each other about the movement, the compromise made with the government and the future of MSP. Can the farmers come back to Delhi once gone, I asked? Has Modi really won or the farmers? I received no reply.

But about then a hearty and white-bearded Jagdev Singh entered our tent. “We must follow our leaders at this juncture,” he said. I asked him who his leader was and was he part of a farm union? “No, I am completely independent. And once the farmers leave it will be hard for them to come back,” he said. 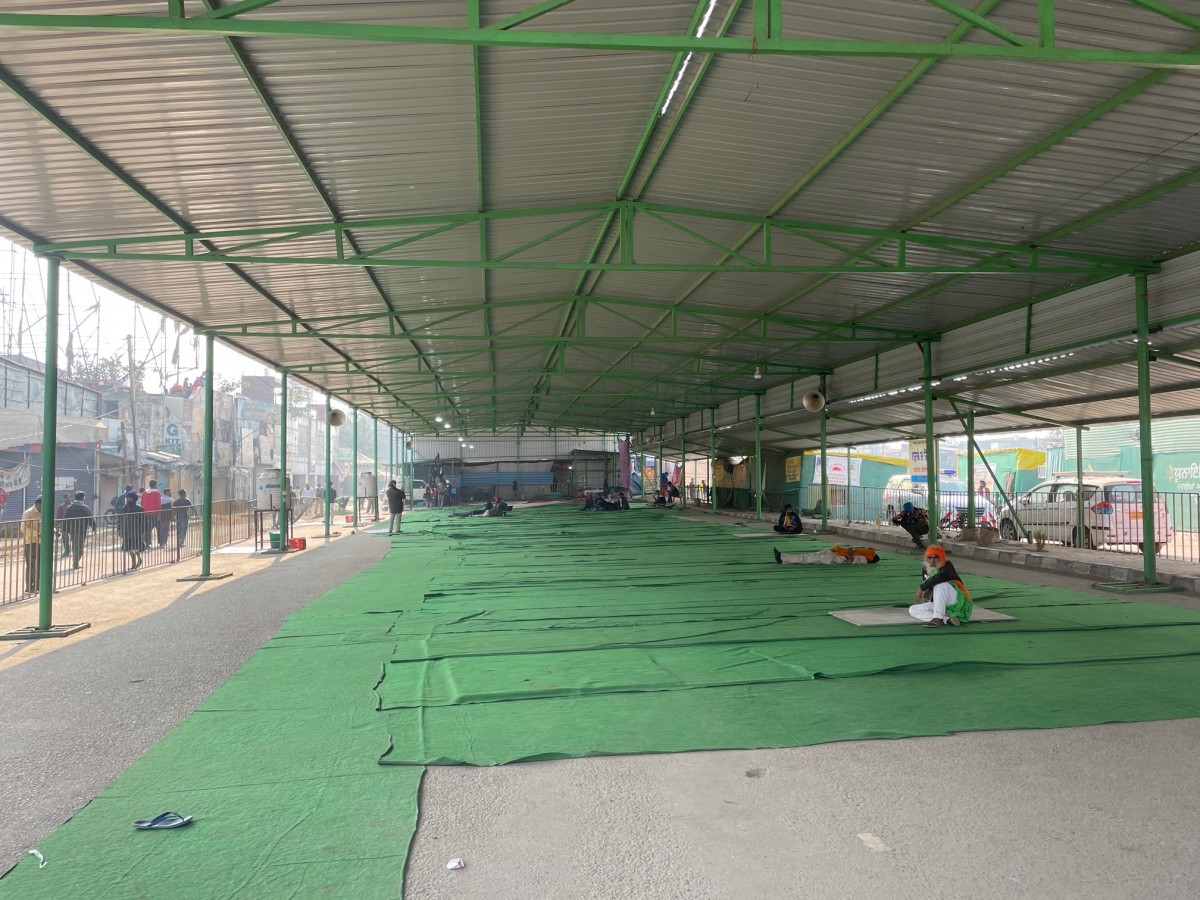 ‘Many leaders have political ambitions too.’ Photo: Indra Shekhar Singh

“Farmers have to be very careful so that even the leaders can’t compromise our goals. The committee is a deflection, many leaders have political ambitions too,” Jagdev added.

As midnight fell, my three tent-mates fell asleep. I decided to take one last stroll. The music had not ended yet, but after a 10 minute walk, my night had. I snuck into the tent, having lived the last night at Singhu, merry and content.