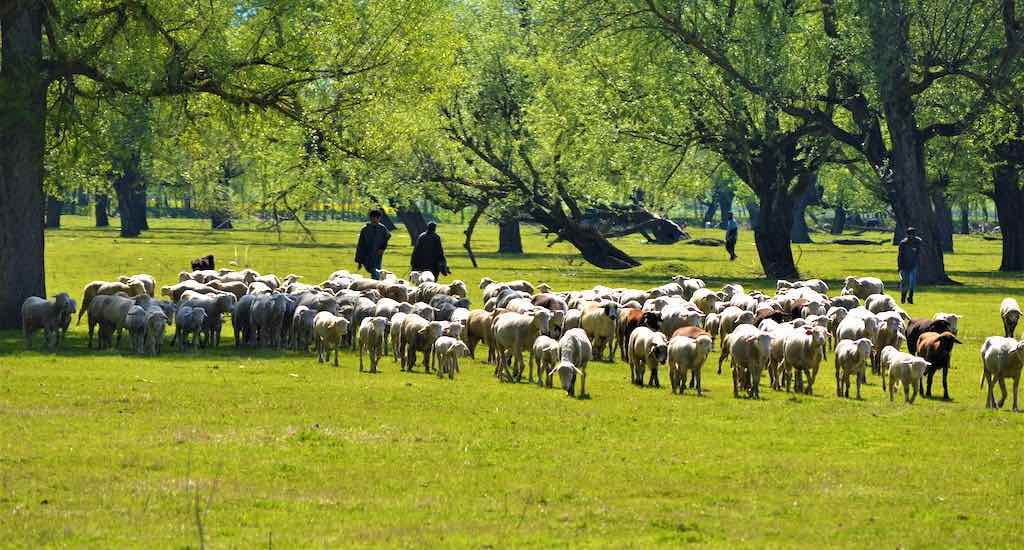 Baramullah: Last year, Hilal Ahmad Yatoo, a young sheep farmer in Chandarhama village of Baramullah district in north Kashmir, was not sure whether one of his ewes had conceived again or not (long after the previous delivery); he did not sell her off to a butcher like an average sheep farmer would.

Yatoo put the ewe in his car and took her to Faculty of Veterinary Sciences and Animal Husbandry of Sher-e-Kashmir University of Agricultural Sciences and Technology (SKUAST) at Shuhama, about 40km from his village, for an ultrasonography. It showed that the ewe was pregnant.

Yatoo, accompanied by his brother Showkat, returned home happy, although the duo had to spend around Rs 800 on treatment and fuel. However, taking such good care of the sheep enables farmers to maintain robust lineage and boosts their income.

Yatoo knew he could not take chances with the quality breeding potential he has developed in his flock with meticulous care over the past several years. The ewe gave birth to a male lamb later. “I had a fair idea of the result. That is why I wanted to get my doubts cleared at the hospital,” Yatoo told VillageSquare.In.

The 37-year-old farmer said that he sold the lamb for Rs 20,000 to another farmer for breeding. “If I had sold it off to a butcher, I would have not only suffered financial loss, but would have also deprived a farmer of a ram for breeding purposes,” said the progressive sheep farmer, who owns 130 Kashmir Merino breed of sheep.

Yatoo said that the ewe delivered another female lamb. “When I identify even some minor problem in my flock, I try to sort it out rather than escaping from it as I rely mostly on my sheep for my income, though I own an apple orchard also,” he said.

Yatoo’s passion for quality sheep farming is reflected in his farm management. His barn is much different from an average barn in Kashmir. Whether it is feeding his sheep or keeping the barn clean to avoid his sheep soiling themselves with their waste, there is arrangement for everything. For these and the design of wooden mangers from which the sheep eat, he and his brother Showkat made use of the Internet.

What has particularly earned Yatoo a name in sheep farming is the way he maintains quality germplasm of Kashmir Merino. It is Yatoo’s and Showkat’s hard work and the meticulous care they take when the ewes are at the breeding stage that makes breeding successful.

“We take a lot of care while choosing which ewe should breed with which ram. We ensure there is no in-breeding (when the same ram breeds with an ewe and her offspring or sibling),” said Yatoo, “We use colour-markers and we also separate pairs when we feel that a certain ewe is ready for breeding.”

When Yatoo sends his flock for summer grazing to the pastures in Gurez-Bandipora for three months, he pays extra money to the herder for ensuring that his livestock doesn’t get mixed with others’ and marks animals with color codes. The sheep are tagged to ensure that they do not get mixed up with other stock, to ensure healthy lineage. Credit: Athar Parvaiz

His interest in sharing insights was evident when Muzaffar Ahmad Khan, a sheep farmer from Achabal in south Kashmir and his friend Firdose Ahmad visited Yatoo. Khan ended up buying a six-month-old ram for Rs 35,000; Yatoo briefed Khan about the care he needed to take while feeding the ram and using him for breeding.

Yatoo said that he sells 20 to 30 sheep every year, both ewes and rams, for breeding. “Early this year, three farmers and I sold 56 sheep to SKUAST for its sheep farm in Shuhama,” Yatoo said. Hilal Ahmad Malik of SKUAST, who looks after the university’s sheep farm said that Yatoo is the first farmer they think of when they need ewes and rams for the farm.

“He is the star farmer when it comes to sheep farming. We have met many progressive sheep farmers and seen their flocks, but there is hardly anyone whose quality of sheep is as good as Yatoo’s,” Malik told VillageSquare.in. “Yatoo’s work as a sheep farmer was recognised at the national level early this year with the Innovative Farmer Award by Indian Council of Agricultural Research (ICAR).”

Farmers like Yatoo help increase mutton production in Kashmir, a Muslim-dominated region with over seven million population, where people are voracious meat eaters. In Srinagar city and major towns, people prefer mutton to beef, which results in increasing demand every year. Mutton is considered an all-season food in Kashmir and is used extensively for Wazwan (myriad varieties of meat dishes) during weddings and other occasions.

According to Abdul Salam Mir, the director of SHD, the primary objective of his department is to increase the production of mutton, besides wool, considering the huge consumption of mutton in Kashmir. As per official records, local production of mutton was 121 lakh kg in 2003 which has now increased to 133 lakh kg. Overall demand is currently 31 million kg, which is met by importing 17.7 million kg from other states like Rajasthan and Haryana.

For several years, Mir said, the SHD has adopted multi-pronged strategy which includes implementation of cross-breeding programs, going on for several years now. “The quality of sheep which we had before 1990s, used to be low on both meat and wool. But after we started the cross-breeding program to get Kashmir Merino, both these issues have been resolved,” Mir said adding that Kashmir Merino is far more productive both in terms of mutton and wool.

As part of the cross-breeding program to get Kashmir Merino, Kashmir valley ewes were crossed with Australian Merino rams and the first generation hybrid (F1) ewes were crossed with Delain rams of USA. The second-generation hybrids (F2) were bred among themselves after proper selection on the basis of wool quality and body weight. Breeding among F2 continued till a breed with steady and uniform characteristics evolved; it was named Kashmir Merino.

Kashmir Merino is proving effective in increasing the local production, with 549 sheep extension centres establishing a vital link between the department and the breeders. Mir said that the technical staff, available at sheep extension centres, provides facilities to the breeders at their door step. Farmers like Yatoo help sheep proliferation in Kashmir by maintaining the best germplasm of Kashmir Merino.

This article is republished from Village Square . Read the original article.