The farmers were protesting outside a private university where the Haryana CM was scheduled to arrive. 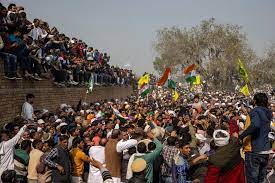 New Delhi: The Samyukt Kisan Morcha(SKM) in a statement on Saturday condemned the alleged lathicharge by Haryana Police on farmers protesting against Chief Minister Manohar Lal Khattar at Asthal Bohar in Rohtak district.

Many farmers were injured in this attack by police, the organisation claimed in the statement.

As farmers came to know about Khattar’s visit, many of them including women gathered outside a private university where the chief minister’s chopper was to land.

The protesters were adamant on heading towards the university and tried to force their way through police barricades when they were allegedly lathicharged.

According to the statement, given the continuous “anti-farmer speeches and behaviour” of Haryana BJP leaders and government, insulted and angry farmers decided to protest peacefully with black flags and gathered in large numbers at Asthal Bohar.

However, police “unleashed violence” against the protestors and did not spare even women protestors. The statement further claims that several protestors were seriously injured.

A protest was organised by Haryana farmers against BJP MP Duggal in Fatehabad too.

The SKM said that on Friday a state-level convention was organised against the Khattar government for enacting draconian new laws on recovery of damage to public property act, which seeks to curb the citizens’ constitutional right to protest. The SKM demands that the state withdraw this legislation immediately, it added.

The SKM condemned the Haryana Police’s repressive behaviour and demanded that Azad be released immediately and unconditionally.

Under the leadership of SKM, a joint meeting was organised at Punjab Agriculture University, Ludhiana on Saturday. More than 100 organisations took part in this meeting, it added.