Ceilings have been imposed on relief, which in any case does not even meet the cost of harvesting a crop. 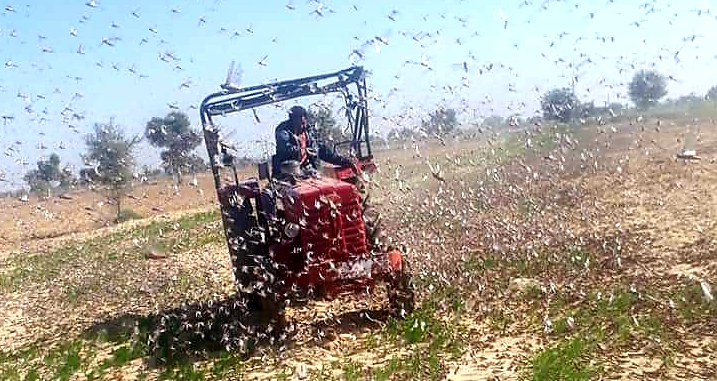 Locusts attacking a field in Fatehgrah tehsil of Jaisalmer. 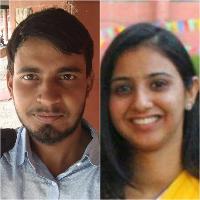 Jaipur/New Delhi: It’s been a year since swarms of locusts first arrived in Rajasthan and devastated crops in the Kharif 2019 and Rabi 2019-20 seasons.

Crop loss assessment reports of various districts in Rajasthan accessed by The Wire reveal that the damage suffered due to locust attack has been exceptionally high. In most of the tehsils, the crop loss is above 60%, some even recording 100%.

Despite this, the government’s response has been a paltry compensation. For lakhs of farmers affected in Rajasthan, the Central government on Wednesday announced a special relief package worth Rs 68.75 crore. The state government is largely relying on the Pradhan Mantri Fasal Bima Yojana (PMFBY) insurance cover as relief to farmers from locust invasion, however, it has made only four districts eligible to receive claim despite reporting damage in 12 districts.

While answering a question in the Lok Sabha on March 17, the ministry of agriculture and farmers’ welfare said that Rajasthan had already disbursed relief worth Rs 110 crore to 66,392 farmers.

As per the State Disaster Response Fund (SDRF) norms, after conducting a special assessment under the respective collectors of the districts, the farmers would be entitled to compensation worth Rs 13,500 per hectare of land, with a ceiling of two hectares. This means that irrespective of how much area of land the farmers have cultivated, the state would compensate only for a maximum of two hectares.

This limit on compensation is even below the average landholding in Rajasthan, which is 2.73 hectares as per the agriculture census 2015-16.

While the packages could be disbursed among a minimum of 67,000 farmers, the lowest number of farmers in the 12 districts in Rajasthan that have reported more than 33% yield loss due to locust attack stands at 24,48,440. Even if we assume that 50% of these farmers were affected by the attack, then too the package stands inadequate.

The Rajasthan government’s relief package of Rs 110 crore to 66,392 farmers breaks down as Rs 16,568 per farmer (Rs 110 crore/66,392), suggesting that most of the farmers wouldn’t have received compensation for even two hectares of land.

The Wire spoke to farmers in these districts to find out if they have received the compensation. Dilip Singh Bhati, a farmer in Fatehgarh tehsil of Rajasthan’s Jaisalmer, who had grown cumin crop in Rabi 2019-20 said, “In December last year, we had requested the district administration to control the locust incursion but they kept making excuses that they didn’t have adequate pesticide available.”

The farmers in Jaisalmer even staged a protest against the inaction of the district administration on December 20, 2019, but it went unnoticed. They alleged that only those tehsils where the patwari has made the locust survey report are receiving the compensation. “We haven’t yet received any compensation despite our tehsil having suffered crop loss due to locusts.” 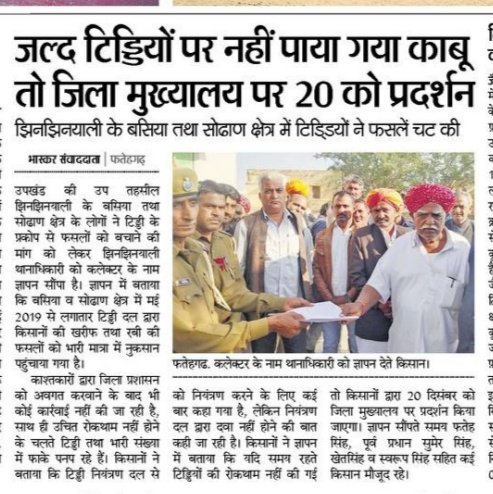 Rewant Singh, another farmer in Fatehgarh who has been insured under the PMFBY, says, “No claim has arrived in my account for Kharif 2019 and Rabi 2019-20.” He adds that the cumin crops, grown in most parts of Jaisalmer, were the worst affected by the locust attack. “Cumin is not covered under minimum support price (MSP) and it is mostly sold in Unja mandi in the adjoining state of Gujarat but due to lockdown, we were not able to go and sell our produce.”

The state government appears to have deliberately excluded districts that have suffered loss due to locust incursion from the PMFBY crop insurance cover.

However, out of these 12 districts, the state notified only four of them to be eligible under the PMFBY “mid-season adversity” clause, namely, Jaislamer, Barmer, Jalore and Jodhpur.

The disaster management, relief and civil defence department in Rajasthan says that after the assembly session, the notification was issued for four more districts. “A total of 8 districts in Rajasthan (Barmer, Bikaner, Jaislamer, Jalore, Jodhpur, Sri Ganganagar, Pali and Sirohi) have been notified to be eligible to receive claim under the PMFBY,” R.S. Hada, superintendent at the department told The Wire.

Even with that, the government has still excluded four districts where it had recorded damage due to locust attack.

Discrepancy between the Centre and state’s damage estimates

The Ministry of Agriculture and Farmers’ Welfare, while answering a question in Rajya Sabha on March 6, said, “No crop loss is reported in Churu, Nagaur and Hanumangarh districts of Rajasthan”. But on February 11, the state government had said damage these districts did suffer damage.

Even the crop loss assessment reports of three districts – Jaisalmer, Barmer and Jalore – accessed by The Wire show that half of the tehsils have not been surveyed for crop loss due to the locust attack. For instance, only three of Barmer’s 14 tehsils were surveyed. Similarly, only 4 of the 9 tehsils in Jalore and in 2 of Jaisalmer’s 4 tehsils were mentioned in the crop loss assessment report.

The farmers in these districts have repeatedly alleged that the survey of loss due to locust attack has been done as per the wishes of the patwari in the area. 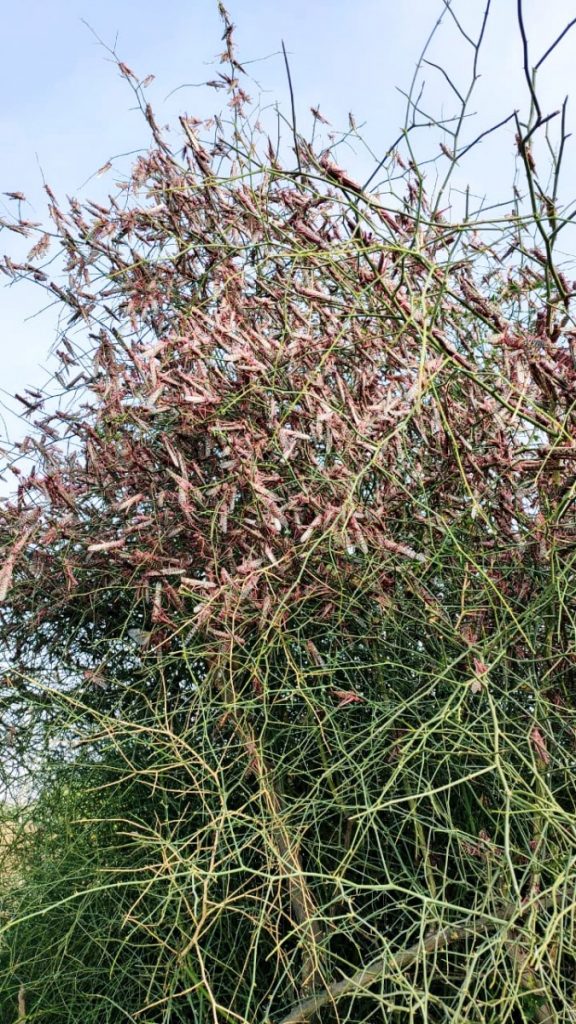 For PMFBY insured farmers, the crop loss compensation from the locust attack is applicable under the mid-season (from sowing to harvesting) adversity clause of the insurance policy. The scheme further mandates that this [mid-season adversity] provision can be invoked for only the crops notified by the state government through a damage notification.

While the Rajasthan government is largely relying on the PMFBY insurance cover as relief to farmers from locust invasion, it has not yet paid its premium share for Kharif 2019 and Rabi 2019-20.

Speaking to The Wire, Om Prakash, agriculture commissioner at the Rajasthan Pant Krishi Bhawan said, “We were supposed to pay Rs 1,430 crore as our premium share for Kharif 2019, out of which Rs 1,100 crore have been paid to the insurance companies. The remaining amount has been approved from the treasury and will be released in the next ten days.”

He added that the premium share of Rabi 2019-20 would be paid after the crop cutting experiments are completed.

This is in contrast to what agriculture minister Narendra Singh Tomar told the Rajya Sabha on March 6. “The Rajasthan government has released the state premium subsidy share to insurance companies on behalf of farmers as per provisions of Pradhan Mantri Fasal Bima Yojna,” said Tomar.