Backtracking on earlier assurances of a complete loan waiver, the government's announcement covers only short-term loans taken by small and marginal farmers from cooperative banks. 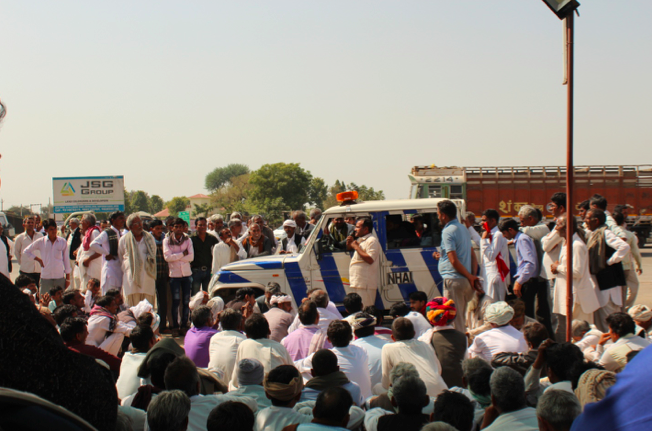 Jaipur: Despite a massive crackdown, thousands of farmers protested against the Vasundhara Raje-led government’s announcement of a limited loan waiver in various parts of the state capital on Thursday (February 22). The protests were held under the leadership of the All India Kisan Sabha (AIKS).

In order to deter the agitating farmers from staging a mahapadav (mass sit-in) around the Rajasthan state assembly, the entry points of the capital were sealed and farmers’ leaders, including veteran Communist Party of India (Marxist) leader Amra Ram – who was leading the protest – were arrested on Tuesday (February 20) under Section 151 of the Code of Criminal Procedure.

On their way to Jaipur to join the protest, some 179 people from Chomu, Kala Dera, Jhunjhunu, Nagaur, Bikaner, Sriganganagar, Hanumangarh and Churu were arrested under various sections on Thursday.

“Nobody was arrested yesterday (February 22) in Jaipur. Only 59 people who were arrested on Tuesday are still under arrest,” he told The Wire.

In September 2017, nearly 15,000 farmers had protested for 13 days in Rajasthan’s Sikar district demanding a complete loan waiver, implementation of the recommendations of the Swaminathan Commission, withdrawal of the ban on cattle trade, a solution to the menace of stray cattle, grant of remunerative prices and a pension for farmers. The Raje regime had then agreed to form a high-level committee to look into the farmers’ demands, but the state budget left those promises unfulfilled. Backtracking on its promise, the Rajasthan government in its budget announced a one-time loan waiver up to Rs 50,000 for small and marginal farmers who had defaulted on short-term loans from cooperative banks.

“When farmers went on protest last September in Sikar, the Raje government had acceded to our 11 demands including a complete farm loan waiver, but now she has taken a U-turn. She is just trying to fool us with this waiver,” said Bhagwan Sahai Bhadala, a farmer from Tatiyawas.

Waiver on only short-term loans

The budget announcement covers waivers of only short-term loans from cooperatives and does not include long-term loans provided by cooperative banks for irrigation, form mechanisation and other purposes.

“We are in doubt whether the loan waiver announced in the budget includes long-term loans from the cooperative banks or not. We have written to the government for the same and will proceed as per the directions,” Vijay Sharma, the managing director of the state land development bank, told The Wire. 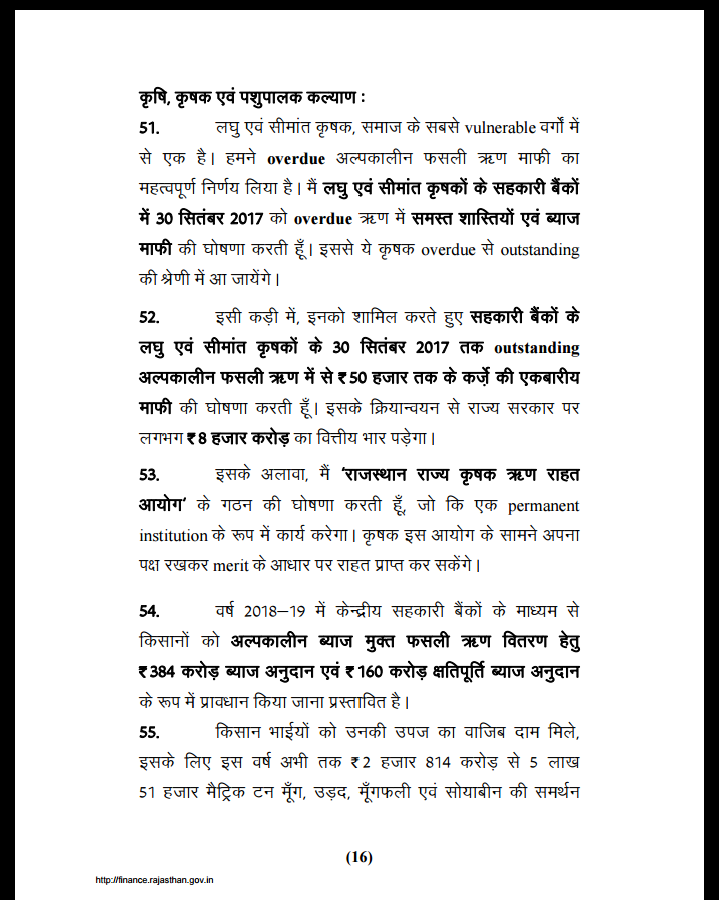 Budget announcement for loan waiver of only short-terms loans from the cooperatives.

Farmers claim that the cooperatives don’t even give them sufficient amount of loan in the first place. “In Rajasthan, the land is birani because of which the farmers are not given much amount of loan. The amount depends on the size of the land holding. Lesser the size, lesser the amount of loan,” said R.C. Sharma, a member of the CPI(M). 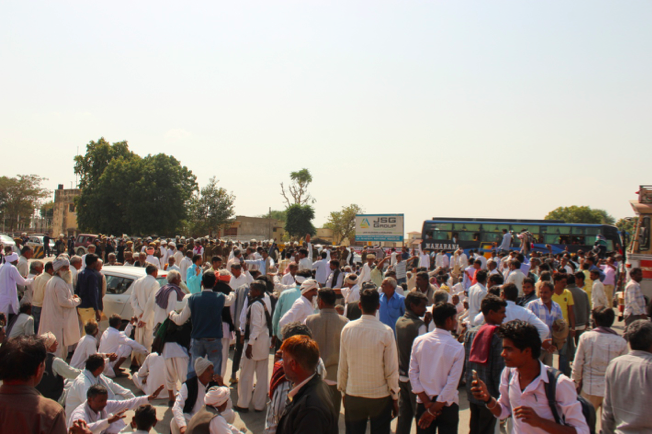 Aimed at overdue loans of small and marginal farmers at the cooperatives, the waiver isn’t meant for those farmers who are repaying the amount on time.

Interestingly, short-term crop-based loans have a 90% recovery rate. According to data from the Rajasthan State Co-operative Bank Limited, the recovery percentage of the short-term loans in the past five financial years was 93.18%, 90.33%, 90.25%, 83.12% and 82.31% respectively. By this calculation, few farmers will be able to avail the loan waiver benefit. 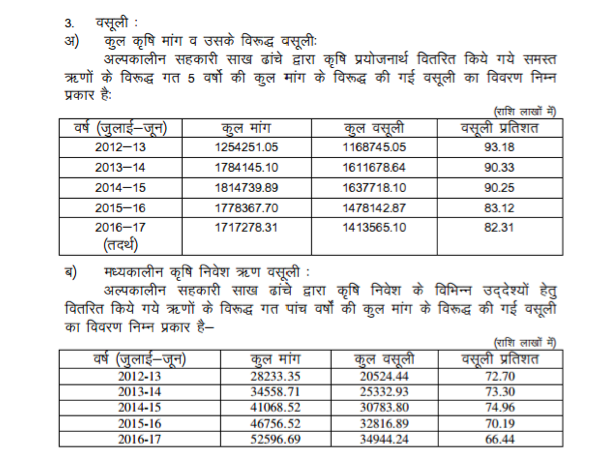 The progress of the short-term and long-term loans of the Rajasthan State Cooperative Bank.

“Short term loans have a better performance. Their recovery is almost 90%. Given at 0% interest rate, the farmers mostly pay it back on time to seek a loan for the second crop,” P.C. Jatav, general manager of the Rajasthan State Cooperative Bank Limited (Apex bank) that covers approximately 22 lakh farmers, told The Wire.

“If all the restrictions are imposed, then only 1-2% of the farmers will get the benefit of the waiver. The announcement has also restricted the agricultural land size to less than eight bighas, which will leave out many farmers who are reeling under debt. The loan given by the cooperative banks to farmers with less than eight bighas of land is already very less. The loan waiver in the budget is yet another jumla of the BJP government,” Ram Chandra Kulahri, member of the AIKS told The Wire. 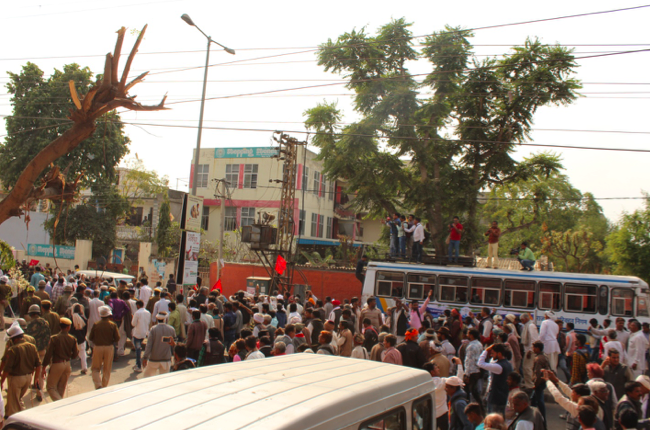 Hundreds of leaders protesting outside the CPI(M) office in Jaipur were arrested. Credit: Shruti Jain

Condemning the repression let loose by the state government in Rajasthan against protesting farmers, the politbureau of the CPI(M), in its statement, has demanded immediate release of the arrested members, withdrawal of false cases and acceptance of the legitimate demands of the AIKS.

The party accused the state government of “bulldozing even the minimum democratic right to protest” by arresting the farmer leaders which revealed the “authoritarian” character of the Raje government.

“The farmers of Rajasthan will not bow down by the repressive actions of the government. If the arrested farmers’ leaders are not released and our demands not met, the entire state of Rajasthan will be shut down,” Ashok Dhawale, national president of the All India Kisan Sabha, told The Wire.