Rajasthan: After a Prolonged Battle, Farmers Get Crop Insurance Claims

In 2018, farmers, who had been denied insurance claims after the Agriculture Insurance Company of India refunded their premiums, filed a PIL before the Rajasthan high court. 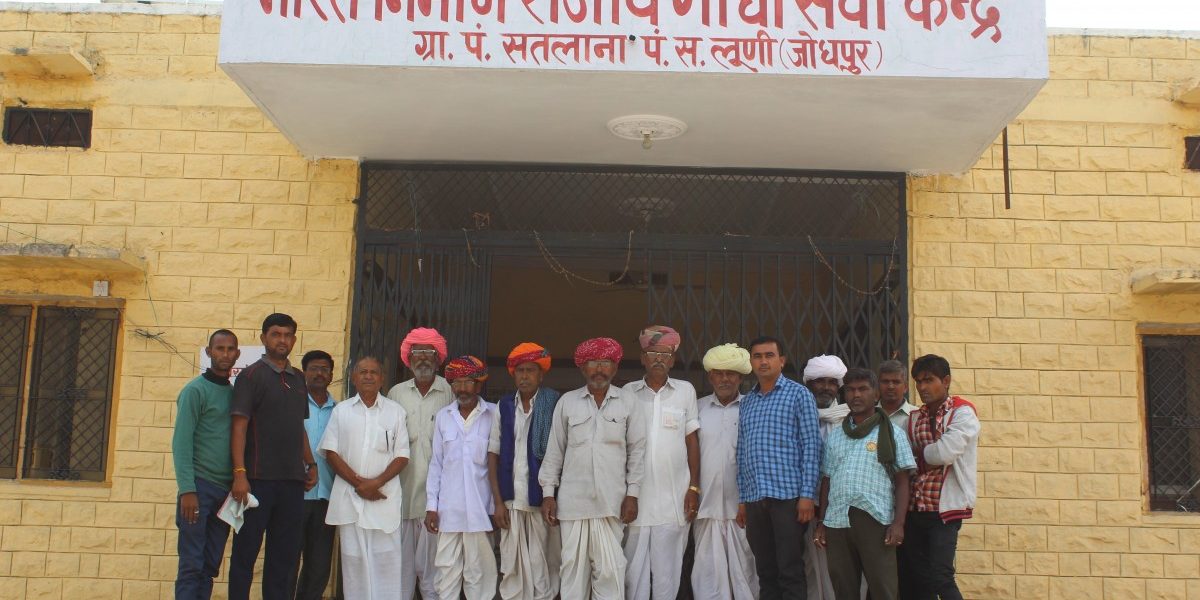 With the support of sarpanch Bhala Ram Patel, the farmers had filed a PIL in the Rajasthan high court to seek their insurance claims. Photo: Shruti Jain

Jaipur: After almost three years of legal battle against a public sector insurance company and a state-run co-operative bank that arbitrarily denied them insurance claims under the Pradhan Mantri Fasal Bima Yojana (PMFBY), farmers in Rajasthan’s Jodhpur have finally received their share of claims for the Kharif 2016 crop season.

The matter pertains to Satlana gram panchayat of Jodhpur where thousands of farmers were denied insurance claims because the Agriculture Insurance Company of India Limited (AIC), a public sector insurance company, refunded their premiums to the Jodhpur Central Co-operative Committee Bank, a year after they were paid, simply because the insurance details weren’t provided in a “soft copy.” The bank, too, didn’t make any effort to credit the refund in farmers’ accounts.

These farmers, with the support of their sarpanch Bhala Ram Patel, had filed a public interest litigation in 2018 before the Rajasthan high court’s Jodhpur bench.

In their order dated September 16, 2020, Justice Sangeet Lodha and Justice Rameshwar Vyas confirmed that the payment to the farmers for the 2016 crop season had been made on August 20, 2020.

Speaking to The Wire, the Sarpanch said, “It’s a big moment for all the farmers in Satlana. Receiving insurance claims under PMFBY has become a challenge for farmers across India. The insurance companies and banks always find ways to escape from paying us. Imagine, if we wouldn’t have stood up for our rights, the company wouldn’t have cared to pay Rs 81 lakh.”

In three patwar mandals – Satlana, Karniyali and Bhacharna – close to 70% yield loss was assessed by the state revenue department for kharif 2016, but the farmers were not provided insurance claims.

When the farmers reached out to the court, the AIC was compelled to provide them with a reason for denying their claims. In its reply before the HC, the AIC stated that since the details of the premium were not provided in a soft copy, despite the rules suggesting that the details must be provided in both hard copy as well as soft copy, it didn’t accept the farmers’ policies and refunded their premiums.

While it is true that a PMFBY notification dated July 23, 2016, states that farmers’ insurance details must be provided both in hard and soft copies, AIC claimed that a soft copy was compulsory and in its absence, the premium could not be accepted.

Even as the AIC had claimed that the insurance details were not in the prescribed format, it took more than a year to refund the farmers’ premium to the bank. “We didn’t receive insurance details for that amount [Rs 16,62,856.57] from the Satlana Primary Agricultural Credit Society (PACS) as per the format prescribed in the PMFBY notification. Rs 16,60,196.71 of this amount were refunded on September 28, 2017 and Rs 2,659.8 on March 20, 2018,” the AIC said in its reply to the court.

To justify the delay, AIC stated it was waiting for proper details to come. However, during this period of one year it didn’t try to communicate with the bank regarding its objections.

“We didn’t want the famers to suffer just because the insurance details were not given in the prescribed format, so we waited for some time and that is why the refund process got delayed,” Pushkar Priyadarshi, regional manager of AIC, had told The Wire last year.

On the other hand, the bank, after receiving the refund from AIC, didn’t transfer it to farmers’ account. In its defence, the bank said that it couldn’t  have “assumed” that the amount refunded was the farmers’ premium.

“When we received an amount of Rs 16,62,856.57 from AIC, we asked for clarification of the amount but it [AIC] didn’t reply. There was no reason for us to assume that the amount was a refund of farmers’ premium,” the bank had said in its reply.

It had further stated that when the premium was provided to AIC on October 5, 2016, it didn’t raise any objection.

The PIL had also raised concerns over the denial of insurance claims by AIC in Satlana in the Kharif 2017 season. The court has said it will further hear that issue.