Protesting Land Acquisition, Farmers in Rajasthan Are Burying Themselves Neck-Deep in Mud

After two women collapsed during the protest, state authorities agreed to meet with farmers' leaders for talks. 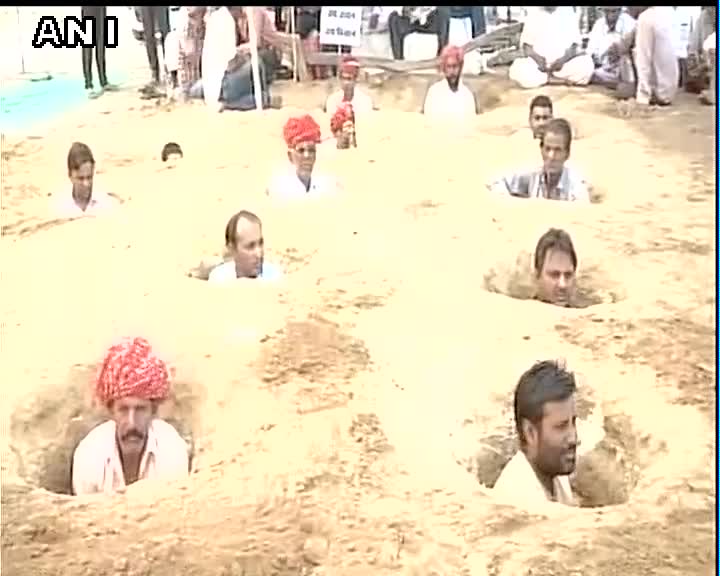 Farmers buried in mud during the protest. Credit: Twitter/ANI

New Delhi: For three days now, farmers in Rajasthan have been digging pits in the mud and burying themselves neck-deep in them. Why? To protest the government’s alleged forced land acquisition at very low rates.

According to an NDTV report, the Jaipur Development Authority (JDA) started purchasing land in Nindar village, around 20 km from Jaipur, in 2010 for a housing project. The state government has deposited Rs 60 crore for some of the land in court, but the farmers have refused to accept this amount, saying that it does not hold up to market rates for land in the area.

The protest has been termed by the farmers as the ‘Zameen Samadhi Satyagraha’, Indian Express reported, and was preceded by a 15-day dharna which had no effect, according to the protestors.

Farmers & their families in Rajasthan burying themselves in mud protesting against govt acquisition of their land. 17th day today. pic.twitter.com/f1T7aE7PUs

Talks are being held between the farmers and the JDA, but a solution is yet to be reached. “After meeting urban development and housing minister Shrichand Kriplani, we proposed to the JDA commissioner that a fresh land survey be conducted with specific points in mind. The JDA has asked for a day’s time to discuss the issue before taking a decision,” Nagendra Singh, president of the Ninder Bachao Kisan Yuva Samiti, told Hindustan Times.

“JDA is after over 400 bigha land, which the farmers have not given away yet,” Singh told the Indian Express. “Over 50 men and women are currently buried neck deep (in mud).”

Two women reportedly collapsed during the protest, which is what prompted the government to call Singh for talks.

One of the protesters, 90-year-old Nanthi Bai, said her family has lived on the land the government wants to take away for seven generations. “I have brought up my eight sons here in this land and I have 20 grandchildren…  if you take me away from my land where will I go? I don’t want the money I want my land,” she told NDTV.