Apart from the many factions of unions deciding to join hands, they also agreed to enable religious bodies, film and music personalities to extend support to the movement against the farm laws.

A large number of people turned up for the rally. Photo: Kusum Arora

Shaheed Bhagat Singh Nagar district: The day of revolutionary freedom fighter Bhagat Singh’s martyrdom – March 23 – is celebrated every year, but this time there was something different about it.

Farmers who believe in his ideology, unparalleled spirit of self-sacrifice and fearlessness in India’s freedom struggle, gathered on Tuesday not only to protest against the three farm laws but also scripted a new chapter by bridging the differences between various factions of unions which had developed after the January 26 violence during the tractor march in Delhi.

The development assumes significance as farmer unions were left divided following the January 26 violence. However, Tuesday’s massive gathering comprising of a large number of farmers gave a much-needed fillip to the ongoing farmers’ agitation. Interestingly, women and youth outnumbered men in the rally. 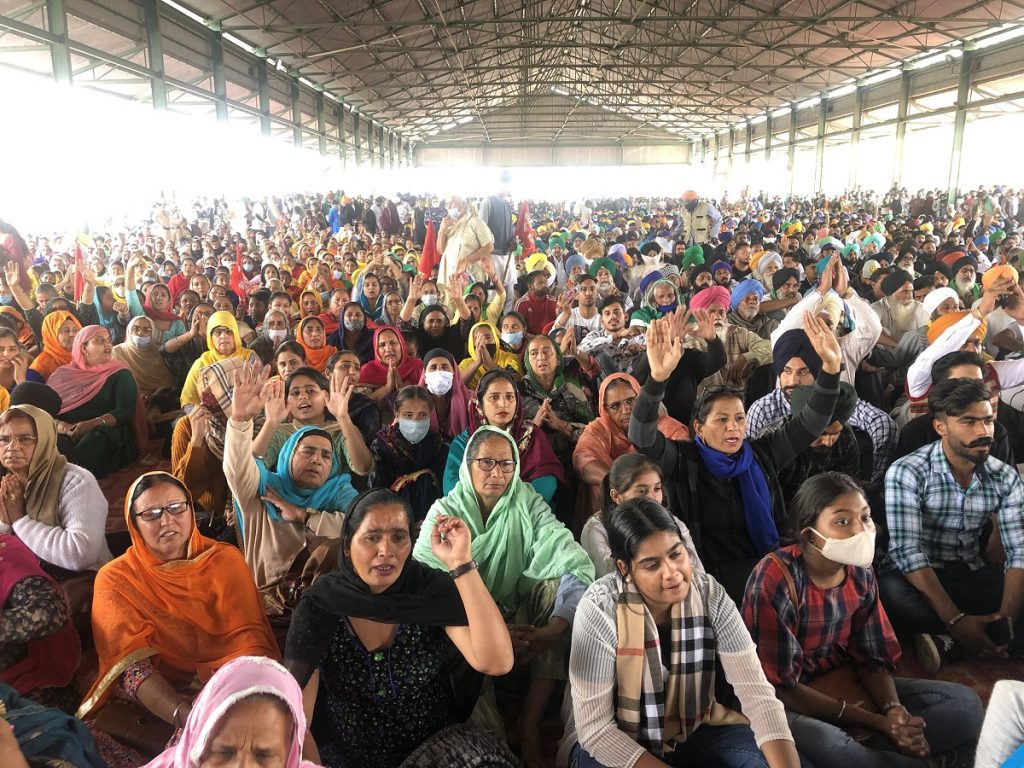 Talking to The Wire, Krantikari Kisan Union president Darshan Pal said that the Samyukt Kisan Morcha (SKM) was discussing and formulating a policy to ensure that different groups like panthic figures, religious leaders and film and other personalities can also be allowed to provide support to the farmers. “We are creating an atmosphere to ensure that all these groups come closer to the farmers’ movement. And for the past six-seven days, the situation is becoming conducive,” he said.

Pal said that as the farmers prepare for the long haul, motivational forces should be allowed to join, while the farmers’ leadership should also evolve. He said that the movement has forced the Modi government to rethink a law made by it for the first. Despite prolonged protests, this government was able to push through other controversial legislation such as the Citizen Amendment Act, he said.

“[This itself] is an achievement in a broader context, but the real victory will only come when these three farm laws are scrapped,” he added. Bhartiya Kisan Union president Balbir Singh Rajewal praised the youth for providing “strength” to the protest. “We all need to be united in this fight. Apart from many threats, we should be wary of the [BJP] IT cell, which has been working merely to defame us and derail our movement,” he said.

Interestingly, the initiative for Tuesday’s rally was taken by renowned Punjabi singer and youth icon Babbu Mann, who is a name to reckon with in the Punjabi music industry. He was present at the rally along with a host of Punjabi singers. Tony Sandhu, general secretary of the Major League Kabbadi Federation, Rurka Kalan village in Jalandhar, was also among the organisers. He said, “It was Babbu Mann’s initiative to hold a rally to bring all the groups together. The idea was to shun differences and unite hands for the cause of the farmers. We are glad at the response our rally got, it is a new beginning today.”

Earlier, Punjabi actor and ace cricketer Yuvraj Singh’s father Yograj Singh received a thumping response when he urged the farmers to form their own political party instead of looking to traditional political parties.

He said, “We have 117 assembly seats in Punjab, why don’t you form your own party? You will have to fight the upcoming elections. Why can’t farmers have their own cold storages? Why should we look up to Ambanis and Adanis? It is our crop, our work. Why should the corporates decide the prices of our yield? Find a leader among yourself and get ready to fight the 2022 Punjab assembly elections. If you want to save Punjab, we will have to form a ‘farmers’ government’.”

Notably, the rally was scheduled to be held at Bhagat Singh’s native village Khatkar Kalan in Shaheed Bhagat Singh Nagar district. However, the venue was changed following rains and thunderstorm and was instead held at the grain market in the Banga sub-division of the district.

Earlier in the day, Hardeep Singh Dibdiba, the grandfather of Navreet Singh, who died during the Republic Day violence, and Major General (retd) Shahbeg Singh’s brother Beant Singh Khiala and his niece actress Sonia Mann also spoke on the occasion.

Massive response from the youth

A large number of youngsters came on tractors, decorated with Bhagat Singh’s photographs, the national flag and flags of farmers’ unions. Many others were seen in T-shirts that had Bhagat Singh’s photos and wore the customary yellow turban, while the women wore yellow dupattas. Yougsters arrive for the rally on tractors with photos of Bhagat Singh. Photo: Kusum Arora

Sukhchain Singh and Manjit Singh, both from the Kahri Sahri village in Hoshiarpur district, told The Wire at the rally, “We identify with Bhagat Singh’s ideology. He sacrificed his life for the country at the age of 23. Even our farmers have laid down their lives for the sake of their lands, existence and identity. Bhagat Singh’s martyrdom is yet another motivation for us.”

Jodhvir Singh (25), a resident of Moela Wahidpur village in Hoshiarpur district, said that earlier, they used to come to rallies for political leaders. This year, they came for a common cause: to preserve their livelihood and identity. “We want to take Bhagat Singh’s ideology forward. All these years, we kept supporting political leaders but look how we have been ruined by the Modi government. Our lands are under attack, petrol and diesel prices are touching the sky and we are on the street to protest against this government. We came wilfully to attend today’s rally,” he said.

Another farmer, Harpreet Singh from Garhshankar, said that Bhagat Singh was also the son of a farmer and “so are we”. He added, “He died fighting for the sake of the country and farmers are dying too. We have relatives and friends abroad, who are deeply concerned about the fate of these protests, as their landholdings are at risk because of these farm laws. Since the government is in no mood to listen to the farmers, we have decided to wipe them out in the 2024 Lok Sabha polls.”

Kamaljit Singh and his friends, who had come from Mohali, said that Bhagat Singh’s actions have inspired them to stand by the farmers. “We also went to the Singhu border to take part in the farmers’ agitation. History is repeating itself and we are glad to contribute in whatever way we can,” they said.