Meet Pappammal, the Centenarian Woman Farmer Who Was Honoured With the Padma Shri

While honouring her, the government noted Pappammal's skills to organise women in agricultural extension programmes and being an ardent organic farmer while also adapting modern technologies. 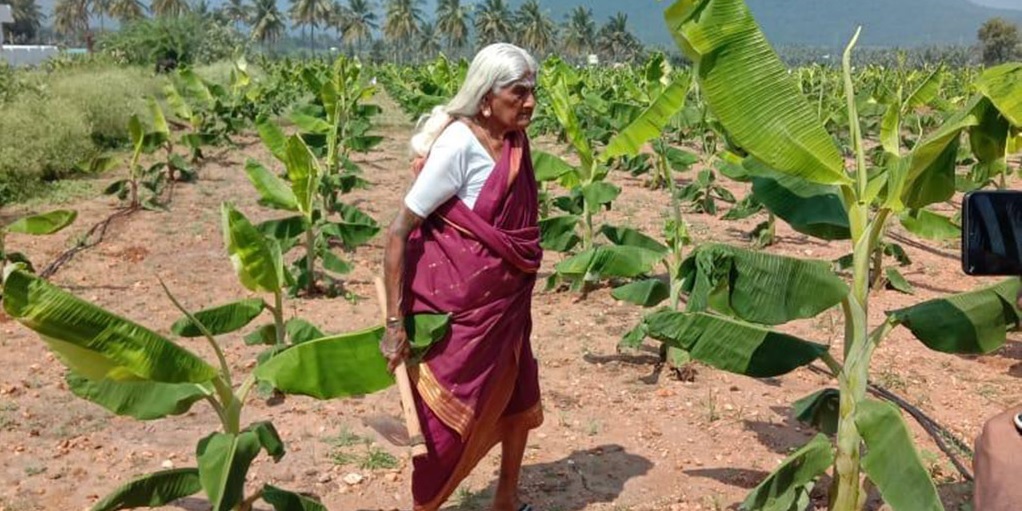 On January 26, media people descended on the idyllic village Thekkampatti located in the western periphery of Coimbatore district. They had come to interview 105-year-old Pappammal, Thekkampatti’s well-known woman farmer.

Pappammal was one of the recipients of Padma Shri, the civilian award, that the government had announced. A few hours before the media came, she had been at her farm, watering her banana crops. When her 50-year-old grandson R. Balu told her about the award and the media’s presence, she expressed disbelief initially.

When she met the media to respond to their questions, her clear voice and erect posture defied her age. But for the deep wrinkles that ran down her cheeks and forehead, it was hard to guess she was a centenarian born in 1916.

The government honoured her with the Padma Shri for being a role model woman farmer and her remarkable contribution in promoting women in agriculture. She was particularly noted for her social engineering skills – organising women in agricultural extension programmes and for being an ardent organic farmer while also adapting modern technologies and introducing new farm practices.

Pappammal’s memory seemed blurred while recollecting her early years. “We hardly had time to relax or play. We girls had to work in all stages – from tilling, sowing, irrigating, harvesting and post-harvest work such as chaffing, milling and so on.”

“With marriage, responsibilities doubled, having to do chores at home and work in the farm,” Pappammal told VillageSquare.in.  “But this was the way of life women had to endure. We had no choice. We rarely ate good food. Rice was cooked only during festivities.” Her active participation in KVK even during the pandemic is proof of Pappammal’s dedication to farming. Photo: KVK, Vivekananadapuram, Coimbatore

Her memories however are clear from late 1950s onwards when her life course took a big turn. “I got my sister married to my husband as I had no children,” she said.  She started life anew in Thekampatti with her grandmother, as her parents had died when she was very young.

From starting a tea shop in Thekkampatti, upgrading it to a grocery shop and buying 2.5 acres of land, Pappammal had a steady growth. Though the perennial Bhavani River that flows down from the Nilgiris mountains runs about 2 km from her farm, she had no means to irrigate her farm.

So she grew rain-fed crops like millets, pulses and grams during the North East monsoon. In the last ten years she has been cultivating banana under micro-irrigation besides the traditional raid fed crops.

Back then women in agriculture were unheard of. Even now official statistics do not properly represent women’s actual share in agricultural work and the economy. According to an Oxfam report of 2013, around 80% of farm work is undertaken by women in India. But they own only 13% of the land.

About 60-80% of food is produced by rural women. Yet they are not recognised as farmers and in the patriarchal social set-up they do not get a share in family or husband’s lands. Women without land title are denied of institutional supports of the bank, insurance, cooperatives, and government schemes.

From the fact that Pappammal had to start a shop and work her way to own land points to the fact that she could neither inherit family land nor get a share from her husband’s lands. Yet Pappammal broke away from the stereotypical rural woman who resigns herself to fate.

Subsequently she was able to buy 7.5 acres more land. “She gave away the 7.5 acres of land to her elder sister’s four daughters, whom she had adopted and educated,” Kamala (68), one of the adopted daughters, who is a retired teacher and helps out in the farm, told VillageSquare.in.

“This was the time I became a member of a political party and won the local body election as a panchayat ward member in 1962 and later became the vice chairman of the panchayat,” she said. At the age of 92, Pappammal demonstrated her skill in operating modern farm machinery after undergoing training. Photo: KVK, Vivekananadapuram, Coimbatore

From 1983, Pappammal’s public life took another major dimensional change that led her to become a lead farmer and an icon of, ‘“women in farming’ after she joined the Krishi Vigyan Kendra (KVK) of the Indian Council of Agricultural Research (ICAR) in Coimbatore district run under the aegis of Avinashilingam Institute of Home Science for Women.

KVK is involved in training and on-field testing of research and facilitating scaling. KVK is also involved in identifying location-specific technology and crop pattern depending on the suitability of local farmers in terms of financial affordability.

“She took basic training and became an instant leader in the local management committee (LMC) of KVK. With her inherent organising skills, she started to mobilize other women in the farm extension activities,” said Kumaravadivel, senior scientist and the district in-charge of KVK.

The LMC eventually became a Scientific Advisory Committee (SAC) and Pappammal became a member. For one who admits not to have never stepped into a school, becoming a SAC member built her capacity as a practical farm scientist and elevated her interact with experts.

As a key member of the extension centre of Avinashilingam Institute of Home Science for Women, and as a member of various committees in the Tamil Nadu Agricultural University (TNAU) in Coimbatore she played an important role in several lab-to-farm technologies. She became an early adopter and promoter of new initiatives among fellow women farmers.

“Her farm in Thekkampatti emerged as a model farm for the students of home science and agriculture and she played host to students during their village stay programmes,” Kumaravadivel told VillageSquare.in.” She also organised the first self-help group of women farmers in her village under KVK.”

“Her leadership stood out when it came to collective initiatives. In 2007 she made the village granary scheme a success by ensuring participation of other farmers. In 2008, at the age 92, she demonstrated her skill in operating modern farm machinery after undergoing training,” he said.

When former Central minister V.C. Shukla visited Coimbatore about eight years ago, he heard about Pappammal and visited her farm. He spent more than an hour asking about her work. Once she played host to 80 farmers from Punjab treating them food cooked with her farm-grown items.

“Professors of TNAU were more like brothers to me and I had an association with 13 vice chancellors. They never missed a single occasion to invite me, be it farm training workshops, exposure tours or the annual farmers’ day celebration in the university,” said Pappammal. On all these occasions she ensured the participation of other women farmers.

“I had my own fear and dislike for chemical-based fertilizers and pesticides. When chemical inputs were introduced in the country, I continued to follow the natural way that I’d learnt in my father’s farm,” said Pappamma, about her involvement in organic farming. “I did not follow any particular school of organic farming or was not trained by any expert.” The doyen farmer is an advocate of greater participation of women in decision making at farm and the household. Photo: KVK, Vivekananadapuram, Coimbatore

About the secret of her health and activity at an advanced age, her grandson Balu said she eats steaming hot food served only on a banana leaf. “Five years ago when she visited Delhi representing women farmers in Coimbatore, she took banana leaves with her and used it in the plane and also during the lunchtime at the conference,” said Balu.

“At the conference, she spoke about the health benefits of eating on a banana leaf and how environmentally friendly it was as it decomposes easily,” Geetha Nagalakshmi, a resident of Thekkampatti who considers Pappammal her mentor and accompanied her on the Delhi trip,” told VillageSquare.in.

“In any given area there should be one or more farmer collectives, which gives benefit of scale and bargain for the produce,” said Pappammal. “Otherwise it is difficult for organic farming to succeed as individual farmers will find it difficult to command a good price.”

The centenarian is currently busy attending functions arranged to felicitate her for the Padma Shri award. “Women should take part in decisions at the farm, household and in the social institutions only then the whole community will benefit,” she tells in all the meetings.

George Rajasekaran is a journalist based at Salem, Tamil Nadu. Views are personal. Email: gr47sekaran@yahoo.com

This article was originally published on VillageSquare.in.