August was a particularly bad month for the farmers with a rainfall deficiency of 44% that has rendered the fate of transplanted paddy uncertain in most of the areas. A farmer in his drought-hit field in the Jankira area of Sambalpur. Photo: By arrangement

Bhubaneswar: Odisha is staring at the grim prospect of a drought in the wake of a prolonged dry spell triggered by a severe deficient rainfall this monsoon, the worst in the past two decades. Farming activities have been badly hit across the state, which received only 661.1 millimetres (mm) of rainfall between June 1 and August 31 this year against a normal of 935.8 mm, a shortfall of 29%.

August was particularly bad for the farmers, with a rainfall deficiency of 44%. This has rendered the fate of transplanted paddy uncertain in most areas.

Hara Bania, a farmer from Sarakanda village in Bargarh, popularly known as the rice bowl of Odisha, said, “Since there was hardly any rainfall in our area, which falls under the drought-prone Padampur sub-division, paddy transplantation was delayed with most of us doing it in August. But given the continued dry spell, we are worried about the fate of the crop. Even worse, groundnut and moong crops, which a large number of farmers in this belt raise along with paddy, have also suffered badly.”

As the spectre of drought looms large over the coastal state, desperation seems to be growing among farmers. Rechaka Banchor, a 60-year-old farmer from Bolangir’s Kadobera village, reportedly died by suicide on Thursday by consuming poison, after his cotton and paddy crops were damaged due to scanty rainfall. He died in a hospital while undergoing treatment.

Meanwhile, the Odisha government has come up with a contingency plan to tackle the drought-like situation. But this has failed to inspire confidence among cultivators. Chief secretary Suresh Chandra Mohapatra in a review meeting on August 23 noted that 30 blocks spread over 15 different districts may have to make use of an action plan to avert the crisis.

In the same meeting, agriculture secretary S.K. Vashisth said that moisture stress in these blocks was affecting paddy transplantation but mitigating steps were being taken by the government. He further said that authorities have been asked to ensure that power supply for irrigation in affected areas is not disconnected by distribution companies (discoms) for non-payment of dues.

“In areas, where paddy cultivation has suffered due to low rainfall, farmers would be encouraged to grow alternative crops,” Vashisth added. For this purpose, the Odisha State Seeds Corporation has been directed to provide necessary seeds to the farmers.

Additionally, the government has issued instructions for stepping up canal repair work to ensure that water reaches the tail end of canals.

Apart from these measures, the government is also providing farmers who have sustained huge losses with more labour intensive work under schemes such as Mahatma Gandhi National Rural Employment Guarantee Scheme (MGNREGS).

Even in irrigated areas, farmers are facing problems as the water level in most reservoirs has gone down significantly. The state has around 63 reservoirs, including 10 major ones, which can irrigate around 4.3 million hectares of land. However, many are running low due to the deficient rainfall.

Byomkesh Thakur, a farmer from Sambalpur’s Talab village, articulated the feelings of thousands of drought-hit farmers of the region while debunking the myth that people living in the command area of the Hirakud dam never face irrigation problems.

“Yes, we live in the command area. But that is no guarantee of irrigation. The canal water does not reach every village and then there is not always sufficient water in the reservoir to meet the irrigation needs of all. This time, erratic rainfall has meant that several panchayats are facing prolonged dry spells. The deficiency has been 30 to 40%,” he said. 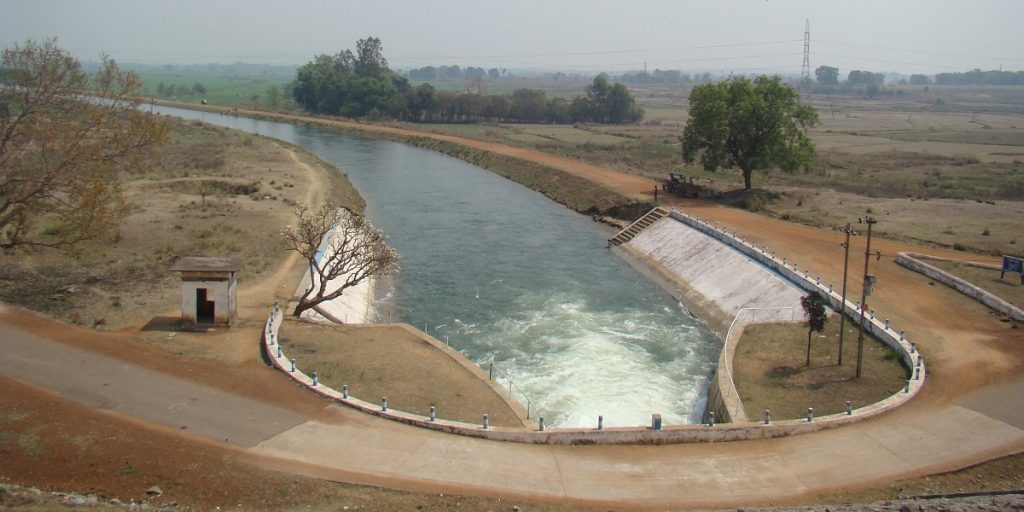 Sasan canal of the Hirakud dam in Odisha. Photo: By AkkiDa (talk) / Akkida at English Wikipedia – Own work (Original text: I (AkkiDa (talk)) created this work entirely by myself.)Transferred from en.wikipedia to Commons by MathewTownsena/Wikimedia Commons, Public Domain

Ashok Pradhan, the convenor of Paschim Odisha Krushak Sangthan Samanvay Samiti, an umbrella organisation of farmers in western Odisha, argued that farmers have suffered on account of several factors.

“First, the forecast of a normal monsoon proved wrong. Since farming depends on weather conditions, the cultivators who relied on the forecast and hoped for a normal rainfall obviously suffered. Our region was also witnessed untimely rainfall in May, when cyclone Yaas hit coastal Odisha. It rained for about 15 days, badly hitting the harvesting of the Rabi paddy. Then there were paddy procurement problems. And now rainfall deficiency has sealed the fate of farmers,” said Pradhan.

Issues with paddy procurement have long persisted for farmers in western Odisha, especially in districts such as Bargarh and Sambalpur.

“Earlier, things were controlled by the District Level Procurement Committee (DLPC) whose officials were accessible but now the entire operation is run by the State Level Procurement Committee (SLPC) which refuses to listen to our grievances. Last time, I could sell only 42.12 quintals of my paddy at the government-approved rate of Rs 1,868 per quintal as the committee delayed issuing procurement tokens. I had around 60 quintals. There are people in my village who could not sell even a quintal of their paddy,” said Hara Bania of Bargarh’s Sarakanda village.

To make things worse, the farmers are also facing a shortage of fertilisers, for which the ruling Biju Janata Dal (BJD) government has blamed the BJP-led Union government. Farmers like Bania confess that due to the unavailability of urea with local cooperative societies, where it was once available for Rs 270 per bag, they are now being forced to buy it from the open market at a high price. “One bag in the open market costs anything between Rs 570 to Rs 600,” said Bania.

The BJD recently staged a demonstration in Bhubaneswar, alleging short supply of urea by the Union government. In the last week of July, chief minister Naveen Patnaik had written to Union chemicals and fertilisers minister Mansukh Mandaviya, urging him to ensure adequate supply of fertilisers to the state.

BJP leaders, on the other hand, dismissed the allegations of the BJD as a political stunt. “They are making these allegations only to divert public attention from the failures of their government,” averred senior party leader Pradip Purohit.

Under the circumstances, farmers in Odisha appear to be despondent. The only ray of hope is the forecast about a good rainfall in September under the influence of some low-pressure systems likely to form in the Bay of Bengal.

“Due to this factor, there could be more than normal rainfall this month. And if that happens it will, to some extent, make up for the rain deficiency that we have witnessed so far. Besides, the government should advise farmers to sow crops like mandia (finger millet) in the dry spell-hit uplands,” said S.C. Sahu, former director of the Bhubaneswar-based Regional Meteorological Science Centre of the Indian Meteorological Department.