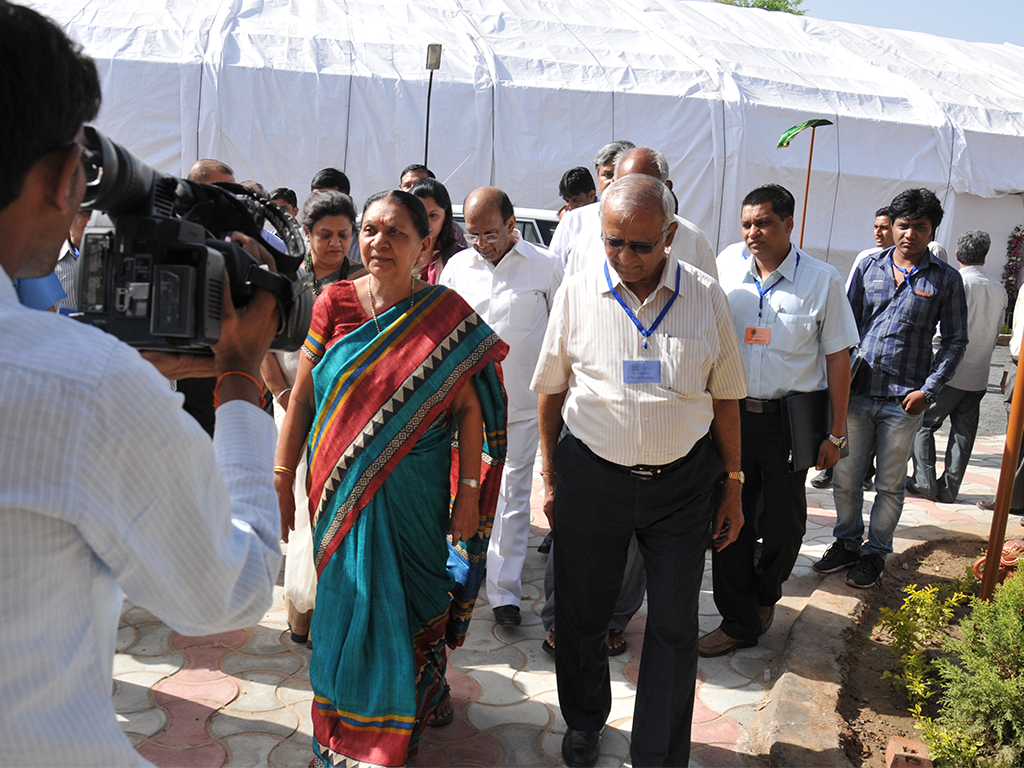 Ahmedabad: The Gujarat Agricultural Land Ceiling (Amendment) Bill, 2015, unanimously passed in the two-day monsoon session of the Gujarat state assembly – after Congress MLAs were suspended for creating a “ruckus” –  is finally beginning to get national attention. The Bill is lying with President Pranab Kumar Mukherjee, awaiting his final nod after the Gujarat governor, O.P. Kohli, sent it to Delhi for approval.  According to sources, the risk-averse Kohli felt that its provisions needed “Central scrutiny”.

Gujarat Congress leaders met the President recently, asking him not give sign the Bill. They allege that it seeks to “hand over” surplus land – acquired during the land reforms days of the 1960s but lying idle since then – to industry and not to landless and marginal peasants. Taking a similar line, Gujarat-based farmer activists have begun pointing towards how the Bill seeks to do away with the Gujarat Agricultural Lands Ceiling Act, 1960, whose main purpose was to distribute surplus land to the landless across Gujarat.

Says Sagar Rabari, a senior farmers’ activist associated with the Khedut Samaj, Gujarat, “Basically an anti-zamindari measure, among those who gained the most out of [the 1960 law] were the Patels of Saurashtra, who received the surplus land which earlier belonged to the Rajput landlords”. He adds, “But thousands of acres of land even today are lying with the Gujarat government. Instead of distributing it to the 54 lakh landless workers in the state – mainly SCs, STs and OBCs – the government wants to give it to industry.”

Officials in the Gujarat government offer a different interpretation. A senior official involved in drafting the amendment Bill, told The Wire, “This is a total misreading. A lot of surplus land, acquired decades ago, is lying idle in the state’s urban areas too. Our only propose is to utilise this land for public purpose. It makes little sense for surplus land lying in municipal corporations and municipalities to be handed over to the landless, as you cannot have agriculture in urban areas.”

Contradicting the official, Congress spokesperson Shaktisinh Gohil read out the Gujarati version of the Bill, which specifically talks of acquiring land lying surplus “both within and outside the urban local body.”

As for the rural areas, the official says, “The only important amendment to the 1960 land ceiling Act is to acquire land coming in the way of implementing a particular industrial project, and hand over a plot of the same size within the vicinity, so that the farmer does not lose land. This is to facilitate the project to be implemented as quickly as possible.”

Yet, apprehensions remain among farmers. The Bill came close on the heels of the Modi government at the Centre dropping its “pro-industry” amendments to the Right to Fair Compensation and Transparency in Land Acquisition, Rehabilitation and Resettlement (LARR) Act because of all-round opposition to it. Letting the amendments lapse, the Centre told the states states to frame their own land laws.

While several governments have already amended their land bills in order to bypass the LARR Act, 2013, Gujarat has still to move in that direction. However, critics say, Gujarat is doing this by coming up with new laws like the Gujarat Agricultural Land Ceiling (Amendment) Bill, 2015.

The preamble, for instance, says that the Bill seeks to satisfy the needs of “rapid industrialisation and urbanisation”, and also the need for utilising available surplus land for “industrial purpose or for the development thereof or for any public purpose”. The term “public purpose” has been kept vague – the Bill does not spell out who will define it, the minister, the secretary, a block-level official, or someone else.

While the Bill does say that the agriculturalist whose land would be taken away for the purpose of industrial project would be compensated with an “equivalent quantum of agricultural land in the nearby vicinity … which shall vest in the state government, free from all encumbrances”, several misgivings have arisen.

Problems with the Gujarat amendments In an unpublished paper on the Bill, development professional Persis Ginwalla, says, “Firstly, the phrase ‘in the nearby vicinity’ is vague and can be made to mean anything, and hence can be rendered useless. Secondly, the value of land within city limits and the price of land outside city limits, even if it is an equivalent quantum, cannot be compared.”

Ginwalla says, “This means that all the earlier claims and counter claims as yet pending in a court of law would be deemed to have lapsed, and the land thus being given to the state government would be ‘without encumbrances’. The claims of the aggrieved parties, which have been delayed in the courts, would thus be voided.”

She believes, “This could be aimed at securing the financial investments of ‘influential persons’ who had (illegally) purchased such land and who are currently facing litigation. By giving away such land entangled in the courts in return for unencumbered old tenure land in the urban limits is nothing but a jackpot!”

A third amendment says, “Any land allotted either under clause (v) or (vi) of sub-section (1) of section 29, to any urban local body or any person respectively shall be of old tenure”. This amendment is said to “remove” the provision that land allocated under land reforms (new tenure) could not be sold or mortgaged without prior permission.

According to Ginwalla, there is “automatic conversion to ‘old tenure’”, which means that “the premium amount for conversion is no longer payable, thus depriving the state of this revenue”. She calls this “yet another ‘subsidy’ to industry in the name of ‘growth’ and ‘development’”.

And finally there is the amendment which says that if the district collector comes to the conclusion that “the purchaser has failed to commence production of goods or providing of services within the period as specified”, the land “shall vest in the state government free from all encumbrances”, and the state government would determine what should be done of this land.

This empowers the district collector to determine the cost incurred by the industrialist in failing to use the land, and to pay such compensation to him/her. “The government is also, by law, making it mandatory for itself to ‘rescue’ a rogue industrialist”, says Ginwalla

Available facts suggest that scattered attempts to “bypass” the LARR Act, 2013, began soon after it was passed in Parliament. More recently, the Gujarat government sought to acquire land for the 900 sq km Dholera special investment region (SIR) in Ahmedabad district, proposed as a smart city along the Gulf of Khambhat, by applying the town planning law’s provision, which allows the state to corner 50% of farmers’ land in the name of building infrastructure.

While a draft “rule” which says that wherever town planning law is applied, the LARR would not apply, is pending official clearance, farmers across 22 villages of the Dholera SIR were recently served notices depriving them of 50% of the land they own in the name of infrastructure. These notices said that the Dholera SIR authorities “reserve the right” to take away the land if they do not comply with the notice by a stipulated period.