Farm Output May Have Increased in Three Years, But Farmers' Welfare Has Not

Agricultural policy continues to focus on production and not the living condition of farmers – which is what got us to this miserable position in the first place. 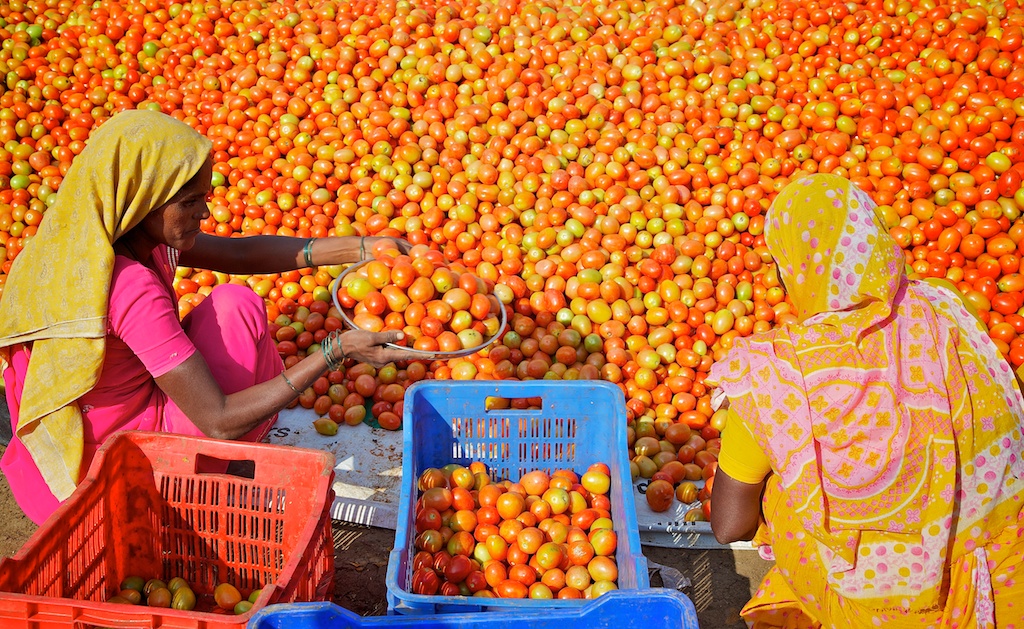 “The India Meteorology Department (IMD) has forecast a normal monsoon for this year. If the monsoon is good, I am confident that foodgrain output will be a record again and boost the growth rate to more than the 4.4% achieved in 2016-17,” said agriculture minister Radha Mohan Singh shared while sharing with the media his view on the government’s achievements in the farm sector in the last three years.

A bountiful monsoon always brings cheer to the economy and I am sure every Indian would pray for normal rains in the years ahead. This is perhaps the reason a former agriculture minister, the late Chaturanan Mishra, often used to say, “The real agriculture minister is Mr Monsoon. If the monsoon is good, agricultural production will be good and vice versa.” No wonder food production has been at an all-time high of 273.38 million tonnes this year.

After two years of back-to-back drought, in 2014-15 and 2015-16, agricultural production has looked up. The agricultural growth rate has gone up, which in turn is expected to drive up the country’s economic growth rate. But behind the statistical configurations that provide the much-needed feel-good factor, agriculture continues to be in the throes of terrible distress. The dark rural underbelly has been gasping for breath for a long time, but for reasons that remain largely unexplained, agriculture continues to be a victim of apathy and neglect. There is hardly a day when reports of farmers committing suicide – a reflection of the grave tragedy prevailing on India’s farm – do not appear in newspapers in some part of the country or the other.

Leaving pricing to an unfair market

This week, a news report highlights the pitiable condition of onion farmers in Madhya Pradesh. After a bumper crop of potato, which forced farmers to resort to distress sale, hundreds of farmers in Indore have been forced to burn the standing crop or feed it to animals. In Indore, onions were fetching a price ranging between 50 paise to Rs 3 per kg. Earlier, onion farmers in Maharashtra had to dump their crop on to the streets when they couldn’t find a better price. Not only onions, irate farmers have been throwing their tomato crop on the highways in Madhya Pradesh, Chhattisgarh, Andhra Pradesh, Maharashtra and Karnataka. During the peak season, the model price for tomatos in some of the Andhra mandis had prevailed between 30 paise and Rs 2 per kg. The slump in market prices is often shrugged off as a seasonal phenomenon, but I shudder to think of the economic blow it causes to the livelihood security of farmers who work hard and yet when the time comes to reap the benefits of harvest, markets fail.

Take the case of pulses. After a stupendous rise in the retail prices of pulses, the government adopted a twin approach to raise their availability. On the one hand, it signed a memorandum with Mozambique to cultivate pulses that will be procured by and shipped to India, and on the other it provided an additional bonus over the minimum support price to encourage domestic production. But when pulses production, including that of tur, increased to 22 million tonnes and market prices crashed, it just procured enough to meet its buffer stocks requirement and left a majority of farmers to face the cruelty of the markets.

The food mismanagement continues. If you think 2017 was a particularly bad year for tomato farmers, when over-production led to an unprecedented glut, you are mistaken. The story was the same in 2016, 2015 and 2014. Even prior to that, farmers had suffered in 2013, 2012 and 2011. Just do an internet search and you will find the same pattern of bumper crops and dejected farmers. Search beyond tomato, and you will find its story repeated in other crops – onions, potato, pulses, cauliflower, mustard, soyabean, cotton, chili, castor, even in wheat and paddy in most parts of the country. And invariably, the state has failed to come to the rescue of the beleaguered farming community.

Bail out corporates, but not farmers

Now compare this with the stock market crash in August 2015. Finance minister Arun Jaitley had swung into action within a few hours of the crash, holding a press conference to assure investors, saying that the government was keeping a close tab on the events. A war room was set up to monitor developments. Chief economic advisor Arvind Subramanian was on his toes throughout the day. But when it comes to farmers facing an unprecedented price crash, which results in destroyed livelihoods for millions of small and marginal cultivators, I haven’t ever seen even a fraction of the kind of alertness exhibited at the time of a stock market crash. The disparity, therefore, is clearly visible.

The disparities don’t end here. Commerce minister Nirmala Sitaraman said the other day, “Roughly about 7,000 big, small, medium and nano measures have been taken on the ease of doing business. As a result of which, we feel that states have realised that ease of doing business is a major agenda and they also see the benefit on going on that route.” In addition, the chief economic advisor has already gone on record saying that writing off bad loans of the corporate sector makes economic sense. Because “this is how capitalism works.”

But when it comes to agriculture, there are not more than a dozen public-sector investment programmes that can be easily counted on one’s finger tips – doubling farmers’ income in the next five years, the Pradhan Mantri Fasal Bima Yojna, Pradhan Mantri Krishi Sinchayee Yojna, e-National Agricultural Market (e-NAM), soil health cards, neem-coated urea and ‘more crop per drop’, to name a few. Besides the flagship programmes, there are a number of other initiatives like the direct benefit transfer of fertiliser subsidies and market intervention programmes. Put together, I bet the government can’t list more than 50 big or small initiatives (including some of the re-cast programmes/projects) in agriculture.

Writing off farm loans too continues to receive flak. While India Ratings estimates that roughly Rs 4 lakh crore worth pf stressed corporate credit is expected to be struck down, the Reserve Bank of India (RBI) has made it abundantly clear that it is not in favour of disclosing the names of even the wilful defaulters. Just 6,857 companies have wilfully defaulted on loans worth Rs 94,649 crore. The RBI has already announced that it is not in favour of the Rs 36,359-crore worth loan waiver, expected to benefit 92 lakh farmers, that has been announced in Uttar Pradesh, thereby sending a strong message to other states under pressure to write off farm loans to apply restraint. The honest credit culture that the RBI harps on is undermined only when farmers don’t repay money. The privilege of bad debt being struck down is only meant for the corporate sector. This is how capitalism works, we have been told.

While the debate around doubling farmers’ income in the next five years has itself doubled in the past few months, I don’t see any focused attempt being made to pull out farmers from the crisis they have been pushed deeper and deeper into with every passing year. Jaitley has presented three budgets. Except for repeating the promise of doubling farmers’ income, there is no clear map laid out. To say that enhancing the farm credit limit by Rs 1 lakh crore to reach a peak of Rs 10 lakh crore is aimed at providing credit support to a sector faced with continuing distress is a clever way of diverting attention from the failure to implement the BJP’s own promise of providing 50% profit over cost of production to farmers.

I have always maintained that the urgent need is to withdraw the Rs 1 lakh crore additional farm credit and instead start by ensuring a 50% higher profit by way of farm price. This is what Prime Minister Narendra Modi had himself promised before the general elections, but his government has backtracked, submitting a written affidavit in the Supreme Court saying this is not possible.

Leaving the majority of farmers behind – nearly 83% of farmers own less than two hectares of land – government policies are instead moving rapidly away from focusing on those in subsistence farming to the promotion of corporate agriculture. The e-NAM initiative, which proposes to link 585 regulated wholesale markets, is in reality integral to commodity trading. A model law on contract farming has already been circulated to the states and an adequate legal framework on land leasing and land acquisitions are already in the offing. Seen in conjunction with a policy framework already laid out under the National Skill Development Council, which aims to reduce the farming population from the existing 58% to 38% by the year 2022, the shift to corporate farming becomes obvious.

At a time when IndiaSpend tells us that on an average 2.13 lakh jobs have been created every year on an average in past three years, pushing farmers out of agriculture to join the growing army of jobless youth does not make any economic sense. Three years is quite a significant milestone for any government – a time for it to sit back, take stock and make appropriate policy corrections aimed at ‘sabka saath, sabka vikaas’. The first and foremost policy correction is to stop viewing the record grain production as an indicator that all is well in farming. It is time to move away from the policy obsession with agricultural growth rates and instead focus on farmers’ welfare, beginning with a substantial rise in farm incomes.

The Economic Survey 2016-17 tells us that the average income of a farm household in 17 states of India, or roughly half the country, stands at a paltry Rs 20,000 per year. This is less than the annual mobile bill of an average, upwardly-mobile citizen living in a city. Unfortunately, the NITI Aayog, as well as the prime minister’s office, continue to prescribe the same faulty prescription that has led to the present crisis. Raising crop productivity, reducing the cost of production and allowing markets to set farm prices is actually part of the same flawed decision-making that has pushed agriculture into a deeper quagmire. It has invariably helped input providers, and that is how a dominant narrative is created.

Punjab has already reached the efficiency level that the NITI Aayog wants the rest of the country to achieve. With 98% assured irrigation (no country in the world is anywhere near that) and with highest productivity among cereal crops in the world, I see no reason why Punjab farmers should be dying. Ignoring Punjab’s debacle, and instead forcing other states to also follow the same path, clearly shows that there is something terribly wrong in policy panning. It is not farmers who have failed; it is the economists and policy makers who have failed farmers.

During these depressing times, only agriculture has the potential to reboot the economy. Redrawing the economic road ahead can only happen if the government decides to discard the path shown by credit rating agencies. It is possible provided the government builds up the political courage to make agriculture the pivot of growth and sustainable development.