The government did not implement the Swaminathan commission recommendation of an MSP set at 50% over cost as it feared "price distortions in markets". 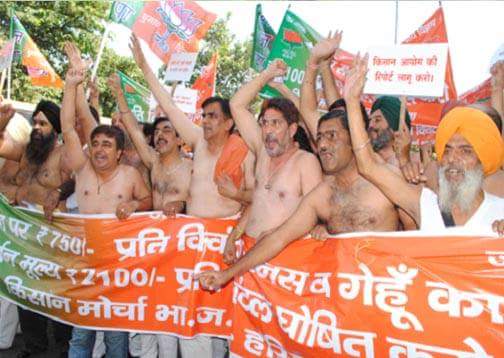 New Delhi: When the BJP went into the 2014 Haryana assembly elections, it had declared with aplomb that it would implement the recommendations of the M.S. Swaminathan Commission on the payment of an increased minimum support price (MSP) to farmers for their produce. Riding on the suffering and aspirations of farmers in this predominantly agriculture-oriented state, the party managed a complete majority – and soon all but forgot its promise made to farmers.

But now, a Right to Information petition filed by Samalkha-based architect-cum-activist P.P. Kapoor has revealed that though the state government kept giving the plea that it did not have information on the implementation of the Swaminathan panel recommendations – according to which farmers were to be paid 50% over and above the cost of the crop as the MSP – the fact remained that the Narendra Modi government had already rejected the report on the ground that its implementation would supposedly result in price distortions in the agricultural markets.

“The recommendation of the Swaminathan commission regarding the minimum support price (MSP) was rejected by the government because the MSP is decided by the Commission for Agricultural Costs and Prices after taking into consideration all the varieties. Therefore, deciding a minimum 50% hike over the cost could lead to distortions in the market,” said a reply from the agriculture ministry to the RTI activist. Kapoor said he had asked the the prime minister’s office and the office of the chief secretary, Haryana about how the Centre and the Haryana government have proceeded to implement the recommendations of the Swaminathan commission. The reply from the Centre was given by the deputy secretary in the agriculture ministry, Sushila Anant, who is the chief public information officer. Anant also disclosed that it was the panel’s recommendations that inspired the National Policy for Farmers 2006, on the basis of which most of the schemes and programmes for farmers are run.

On the other hand, the Haryana government stated via its directorate of agriculture in Panchkula that it did not have any information on the implementation of the Swaminathan panel recommendations, which had submitted five reports between 2004 and 2006.

Kapoor claimed that the RTI replies have exposed the anti-farmer policies of both the Modi government at the Centre and the Manohar Lal Khattar-led BJP government in Haryana. “As farmers do not get just remuneration for their produce, agriculture in general has become a loss-making proposition,” he said, adding that this is leading to rural distress and forcing farmers to commit suicide. As many as 374 farmers committed suicide in Haryana in 2013, which was 4.3 times more than the number in Punjab that year.

The Centre’s argument that giving of 50% over cost in MSP would lead to market distortions is a cruel joke on farmers, Kapoor continued. He added that several BJP leaders in the past – including Om Prakash Dhankar, who is now the Haryana agriculture minister – had organised vociferous protests to demand a higher MSP for farmers and implementation of the Swaminathan panel recommendations. But now that they are in power, they are no longer speaking on this issue. He also questioned whether there was any difference between the BJP and the Congress, since the ruling party wants to play by the rules framed in 2007 when the Congress was in power.

Incidentally, even last year, Swaminathan made a fervent appeal for implementing the higher MSP he had suggested, stating that it would increase the prosperity of farmers and help the nearly 60% of the population that lives off agriculture.