At a press conference at the Singhu border, farmer union leaders said that agitators will keep sitting at the borders of Delhi until the Centre does not revoke the three farm laws.

Activist Yogendra Yadav along with farmer union leaders addresses the media at the Singhu border at the ongoing protest against the Centre's farm laws, November 30, 2020. Photo: PTI/Shahbaz Khan

Mohali: On the fifth day of the ‘Delhi Chalo’ march, farmers’ union leaders addressed the media at the Delhi-Haryana Singhu border for the second day today.

All the leaders condemned Prime Minister Narendra Modi’s statements on the new farm laws made during his ‘Mann Ki Baat’ radio show this Sunday.

Invoking the teachings of Guru Nanak – Kirrt Karo, Naaam Japo, Vand Chaako, or work hard, say the name of  God and share with others – on his 551st birth anniversary, union leaders said that they have gathered here to protect the rights of Kirrtis, or workers, labourers and farmers.

Jagmohan Singh of BKU (Dakaunda) said, “Prime Minister Modi addresses the nation with his ‘Mann Ki Baat’ every Sunday, we request him to listen to the ‘Mann ki Baat’ of the farmers’ as well.”

Singh added that until the Centre does not revoke the three farm laws, agitators will keep sitting at the borders of Delhi. Singh said that the Modi government’s decision to pass a Bill related to farmers without consulting farmers shows that the Modi-led regime is nothing but “a fascist state”. 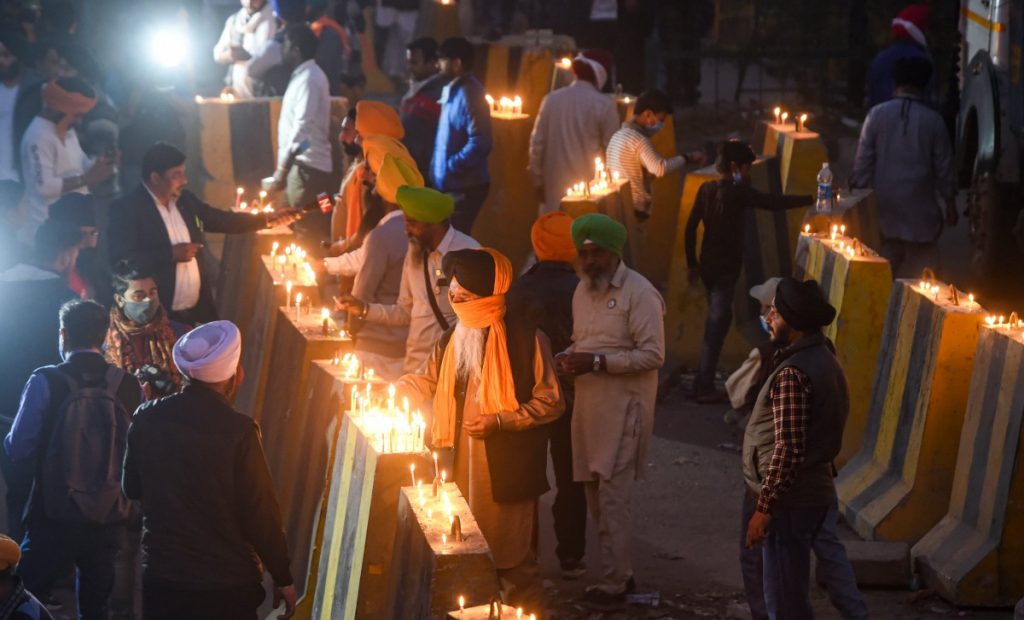 Farmers light candles on the occasion of the birth anniversary of Guru Nanak Dev at the Singhu border on November 30, 2020. Photo: PTI/Shahbaz Khan

Yogendra Yadav, national president of the ABKSS, said that the farmers’ movement has proved the Centre wrong on many levels. “Farmers who are here today have exposed five lies and I will tell you what those lies are,” he  said.

“The Centre had said that the new farm bills will remove the so-called middlemen and so only the middlemen are protesting. But look around you and see who all are here. I won’t tell you, you find out for yourself if it is the peasantry or the middlemen,” Yadav said.

“The second lie that we have exposed,” Yadav added, “is that the poor farmer is a gullible breed and they don’t know what is good for them. Let me assure you that if you speak to even a child at this protest, they will tell you why they are here and what is wrong with the farm bills.”

Adding that “the Centre is busy painting the picture that this protest is a protest of only Punjab”, he said that while Punjab has led this fight, farmers and workers from UP, Haryana, Madhya Pradesh and Rajasthan were present too.

Alluding to the tweet of BJP’s IT cell chief Amit Malviya and Haryana chief minister Manohar Lal Khattar’s statement, Yadav said that those who were trying to malign the farmers’ movement by calling them ‘Khalistani’ are the real traitors.

Gurnam Singh Chaduni of the Haryana BKU unit said that the Haryana police has slapped three cases against him for rioting, arson and attempt to murder, which shows just how repressive the Haryana government is.

Chaduni said that the new farm laws aim to convert the peasantry of this country into economic slaves. He said that the pro-corporate nature of the new laws will make the rich even richer and the poor even poorer.

“If you calculate, then Ambani’s hourly income is higher than the debt of all farmers of this country combined,” Chaduni said.

Calling PM Modi a “legendary liar”, Shiv Kumar of the RKM said, “Prime Minister says that they have assured us a crop prices that are C2+50, whereas, farmers don’t even get minimum support price through which he/she lives. I have seen prime ministers lie but I have not seen a prime minister who is a legendary liar,” he said.

At the end of the press conference, members of two different transport associations showed solidarity with the farmers. They said that if the farm bills are not revoked then all transportation of New Delhi will be put on halt.

“All taxis, buses, trucks will be put on halt. We will go on strike and let nothing run in Delhi,” said a transporter from the stage.