The Maharashtra government’s Rs 34,000-crore farm loan waiver may not provide much relief to small and marginal farmers in Marathwada, who are caught in the debt trap of private moneylenders.

The Maharashtra government’s Rs 34,000-crore farm loan waiver may not provide much relief to small and marginal farmers in Marathwada, who are caught in the debt trap of private moneylenders. 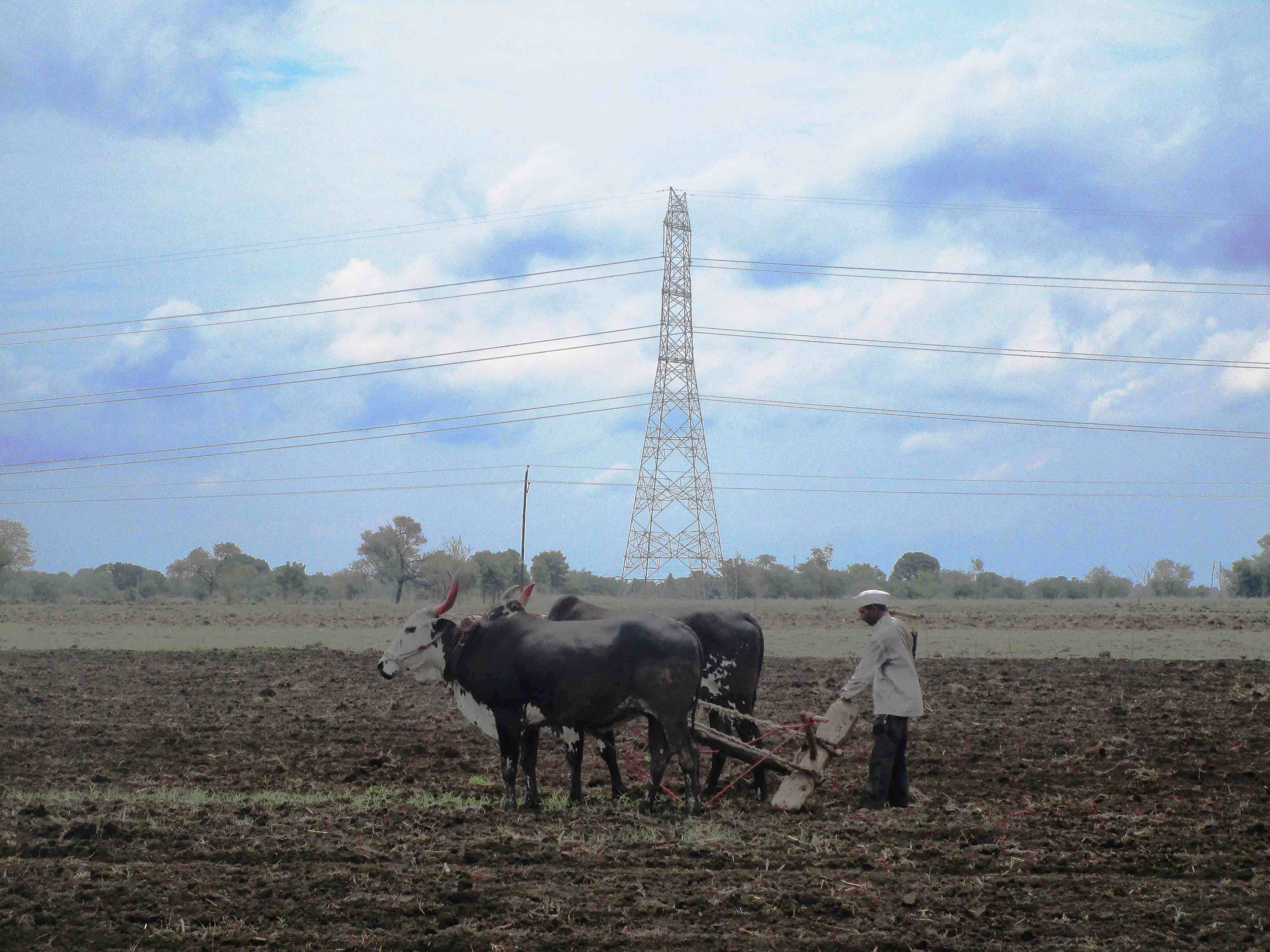 Farmers say the cost of production has spiked in the last few decades. Because the input costs are high and returns are low coupled, farming has become unprofitable, especially with erratic rains. To prepare the land for sowing, most farmers now use tractors; small/marginal farmers rent them for Rs 4,000. Earlier, the tractor’s job was performed by the farmers’ bullocks. Credit: Nidhi Jamwal

Latur: Venkat Balbim Bhise, a farmer who owns three acres of land in Bisewagholi village, in Maharashtra’s Latur district, is in his early thirties. But anger bordering on fatalism is writ large over his weary face. Venkat owes almost Rs 3.5 lakh, of which only Rs 65,000 was borrowed from a local cooperative bank. The rest was from private moneylenders who charged an interest of 60% per annum. The state chief minister Devendra Fadnavis’s recently promising to have farmers’ loans waived off has brought him little cheer.

“Small and marginal farmers like me, who own less than five acres of land, receive very little loan from the ‘society’ [primary agriculture co-operative society under the district co-operative bank],” Bhise told The Wire. “The loan is also never disbursed in the need of hour, forcing us to approach private moneylenders who charge a huge interest rate, making it nearly impossible for us to ever pay it back.”

Bhise’s neighbour is Rajabhau Manikrao Salukne, who owns three acres of land and had approached the ‘society’ for a loan of Rs 20,000. However, he was sanctioned only Rs 1,000. “I grow soybean and there is no irrigation facility in my farmland; not even a borewell. How does the government expect me to do farming with mere thousand rupees?” Rajabhau asked. He recently borrowed a lakh rupees from a private moneylender for his daughter’s wedding. The interest rate, as with Bhise, is 60% per annum.

The agrarian crisis in Marathwada, a semi-arid region in Maharashtra that has surpassed Vidarbha in farmer suicide cases, has been exacerbated by consecutive droughts, freak hailstorms, rapidly falling groundwater levels and knee-jerk reactions to the situation by the state government. “The condition of small and marginal dry-land farmers in Marathwada is pitiable. They neither have credit for farming nor any water for irrigation,” said Mohan Gojamgunde, an agriculture officer in Latur. “To top it all off, extreme weather events, such as unseasonal rains and hailstorms, destroy standing crops and push farmers into more debt.”

Five years ago, Venkat owned 4.5 acres of land. However, to repay a private loan of Rs 3 lakh, he sold 1.5 acres off. The next three years were all drought years, which – according to farmers – was a period worse than what had befallen Maharashtra in 1972. “It was only last year that Marathwada received good rains. I thought my bad time was over and took khazagi karz [Hindi for private loan] of Rs 60,000 at 60% per year interest rate to buy a Jersey cow. But within a few months the cow died,” said Bhise.

He didn’t lose hope, and repeatedly petitioned the ‘society’ for a loan. In October 2016, he borrowed another Rs 65,000 to cultivate sugarcane. However, the sugarcane crop needs an annual rainfall of 2,100-2,500 mm while the Marathwada region receives only 844 mm. The shortfall is met through unhindered groundwater extraction.

Bhise invested Rs 1.3 lakh and had a 550-foot-deep borewell dug. He borrowed Rs 80,000 privately to purchase an electric motor for the well. “Earlier this year, the borewell went dry and my entire sugarcane crop wilted,” said an angry Bhise. “Marathwada farmers are a cursed lot. We will never be happy. Our children will also suffer like us.” He has since decided to give up farming and work as a daily wager. His wife is already employed as farm-labour and earns Rs 100 a day.

Village after village in Latur, which received drinking water through a ‘water train’ last summer, is replete with stories of small and marginal farmers finding it hard to stay above water. A profound lack of credit and a changing climate has broken the backs of their poorest farmers.

Satyavan Padmaka Nageen owns two acres of land in the district’s Sonwati village. The area is just enough to make ends meet. In early 2013, he rented an additional 1.5 acres of land for two years. “I thought I would toil for two years and make some profit out of farming. But the next three years were severe drought years and I got nothing out of the farmland. Instead, I had to pay Rs 1.8 lakh as rent,” Nageen explained. He has a private debt of Rs 1.5 lakh, borrowed at an interest of 36% per year.

“The symptoms of the agrarian crisis in the state were showing for the last couple of years, but the state government failed to [act in time],” said Sandipan Badgire, a farmer and social activist from Sonwati village. “The recent loan waiver might provide a short breather to the wretched farmers but it won’t pull them out of misery.” 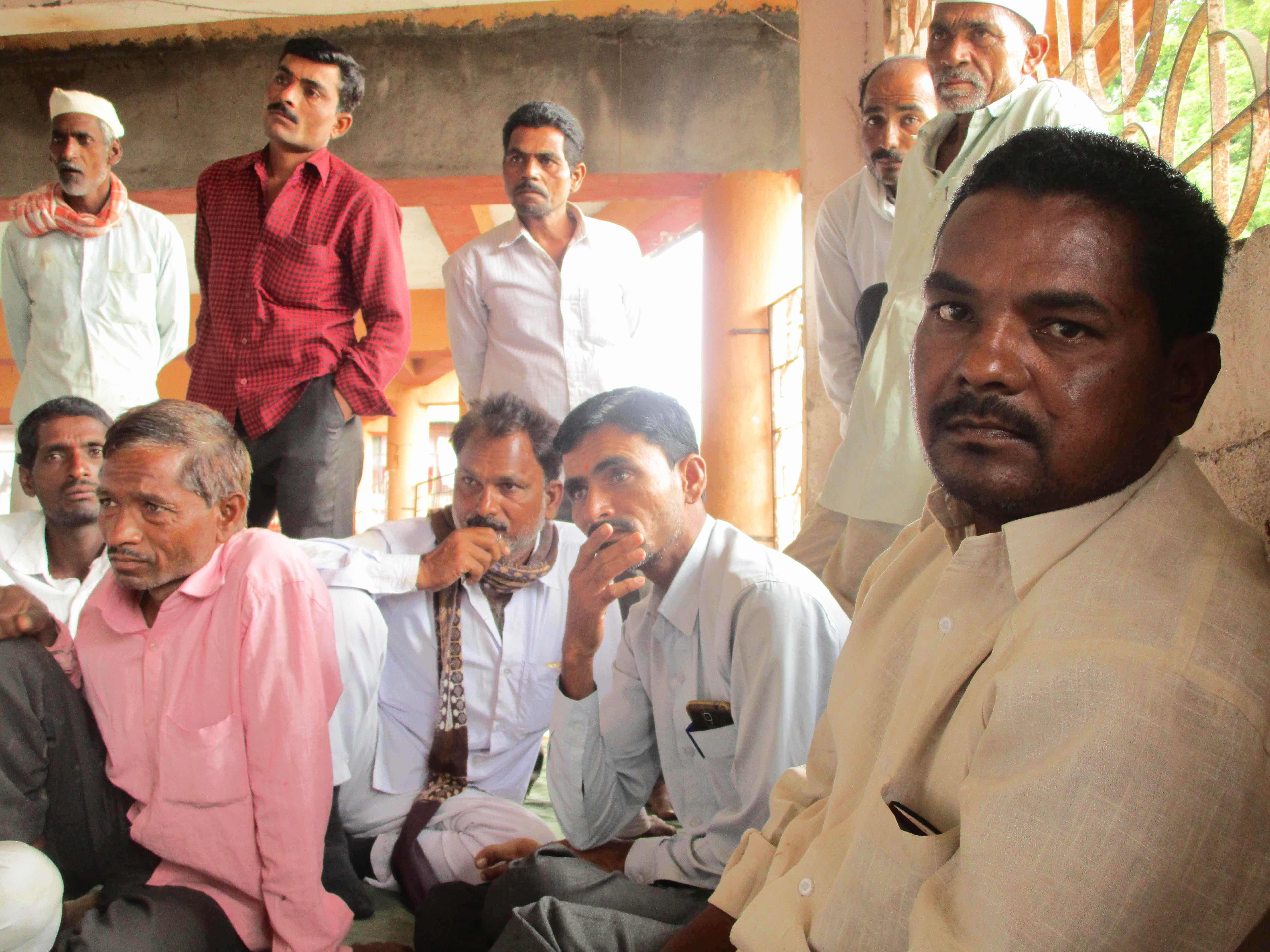 Venkat Balbim Bhise (extreme right), Bisewagholi village: “There is no future for farmers in this country. We will rot and die; and so will our children.” Credit: Nidhi Jamwal

Meanwhile, farmer suicides have continued in Marathwada. Despite a good spell of rains in 2016, the region recorded over a thousand farmer suicides cases in the same year. In 2017, between January and April, 852 farmers have already taken their lives in the state; 291 were from Marathwada.

On April 14, 21-year-old Sheetal Vayar from Bisewagholi village jumped into a well on her father’s farm and killed herself. Her father, Venkat Lakshman Vayar, owns five acres of land. Last December, he had planted sugarcane on 1.5 acres. “We had to marry off Sheetal this year, so I decide to plant sugarcane, a cash crop, to get good returns. But, the only source of water, a dugwell, dried up and the entire sugarcane crop collapsed,” Vayar recalled. He had been considering taking a loan from a private moneylender for Sheetal’s marriage when she killed herself. The state government has given her family a compensatory amount of Rs 1 lakh.

“One year of drought pushes a farmer three years backward. We have faced three consecutive years of drought along with freak weather events” said Salunke. “The government cannot even fathom the depth of the agrarian crisis in Marathwada.”

According to Sandip Gidde, a member of the core committee of the Kisan Kranti Jan Andolan, a group that recently spearheaded a farmers’ protest in Maharashtra, loan waivers will not resolve the agrarian crisis or keep farmers from killing themselves. “The government is telling farmers to grow more crop per drop. Farmers are producing crops, but the government is unable to lift them or provide a fair price. The [minimum support price] of crops fixed by the Centre does not even cover the production cost of some crops. So farmer earnings are in the negative,” Gidde explained. He wishes the minimum support price is calculated as 1.5-times the total cost of production – a recommendation of the National Commission on Farmers constituted in 2006 and headed by M.S. Swaminathan.

Almost 70% of the total cost of production is spent on input materials like seeds, chemical fertilisers, pesticides, etc. Experts also demand strict quality control as the market is flooded with fake seeds and substandard pesticides. “Three years ago, we seized branded fake soybean seeds worth Rs 3.5 crore in Latur, which, I fear, is just the tip of the iceberg,” said Anil Patil, an official working with the quality control division of Latur’s agriculture department.

Meanwhile, farmers have only two demands: sufficient credit on time and rains on time. “If we receive both these things on time, we can tide over tough times. But the way things are, it seems rains are going to get more and more erratic,” said Ashok Gawli, a worried dry-land farmer who owns three acres of land in Sonwati.

Marathwada’s farmers have also been facing freak weather events. In March this year, when the rabi (winter) crop was almost ready, hailstorms destroyed standing crops over an area of 85,000 hectares in Marathwada and Vidarbha. Last September and October, unseasonal rains that had come down for eight consecutive days extensively damage soybean crops, according to Gawli.

In such cases, crop insurance helps. Before sowing the crop, a farmer has to get a crop certificate from the local revenue official mentioning the area under cultivation and the crop to be sown. The premium can be paid in any of the banks authorised by the national agriculture insurance company. Several farmers in Marathwada have started getting their crops insured.

Anant Niture, who owns two acres in Sonwati, has benefitted from the Centre’s Pradhan Mantri Fasal Bima Yojana. “I had paid a premium of Rs 700 per hectare for my soybean crop. When I lost my crop to unseasonal rains, I received a compensation of Rs 18,000 per hectare, which I used to pay off some of my debt,” Niture said. Earlier this year, the Maharashtra government disbursed Rs 894 crore as insurance for farmers whose crops had been damaged by hailstorms and unseasonal rains in 2015’s rabi season.

Finally, of course, is the plight of the groundwater, and the state’s regulation of its use. In the summer of 2016, Latur’s groundwater levels fell by a stunning 3.5+ metres. The district has some 80,000 agricultural borewells, of which around 50,000 are operated all year long. In some areas, there is no water to be found at a depth of over 244 metres. The Maharashtra Groundwater (Development and Management) Act 2009 bans borewells going below 200 feet (60 metres) but it has not been enforced, according to Patil.

It seems the state government has its work cut out for it.

Nidhi Jamwal is an independent journalist based in Mumbai. She tweets @JamwalNidhi.