The average land given to the rural landless is small and falling, from 0.95 acres in 2002 to 0.88 acres in 2015—a 7.4% drop over 13 years–and a slowdown is evident in the process of taking land away from rich landlords 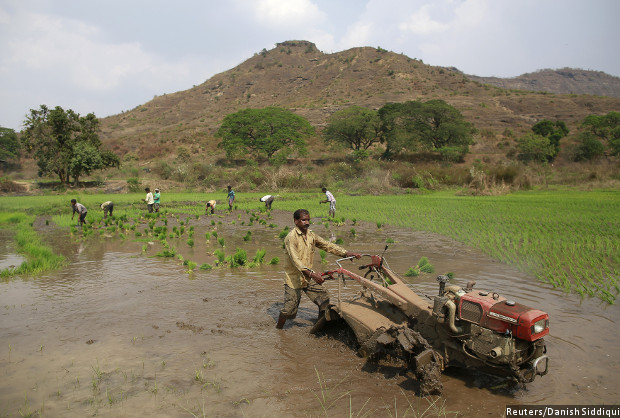 Almost three decades ago in 1990, Radheshyam, 49, was given half an acre of farm land free, taken away from a landlord as part of what was then a 40-year-old state law that allows distribution of such land to the poor.

One of 5.78 million beneficiaries of land redistribution nationwide, Radheshyam–he uses only one name–got his land within 45 days of being shortlisted by the gram sabha (village council) in his village of Bebar in the western Uttar Pradesh district of Mainpuri.

For the next five years, Radheshyam grew foodgrain on his half acre, which yielded about eight quintals of rice and six of wheat every year. After buying fertiliser, pesticides, manure and water, the land provided mainly enough for his family of eight.

In 1995, rainwater filled a nearby pond and flooded his land. Since then, Radheshyam moved to Agra, 113 km to the west, and worked whatever job he could find. In this time, his family grew and he borrowed money to get by

Steeped in debt, he now believes that the land he—and others in his village, of about 310,000 statewide—got after the Uttar Pradesh Zamindari Abolition and Land Reforms Act, 1950, was too little to change his life.

Radheshyam’s situation reflects the general failure of a 54-year-old Indian programme to take land from the rich and give it to the poor.

Five facts, gleaned from the 2011-12 agricultural census and 2011 socio-economic caste census and this correspondent’s data, summarise the failure of India’s land reforms:

What has largely failed nationwide—with the exception of West Bengal—over 54 years since a land-redistribution law was passed is not likely to improve, according to data in a response this correspondent received to a right-to-information (RTI) application filed with the Department of Land Resources of the Indian government’s Ministry of Rural Development.

The average land given to the rural landless is small and falling, from 0.95 acres in 2002 to 0.88 acres in 2015—a 7.4% drop over 13 years–and a slowdown is evident in the process of taking land away from rich landlords, the RTI data reveal. (*The data for 2006 was sourced from the website of Ministry of Rural Development, Government of India, from the hyperlink titled “Other Land Reform Programmes”, as accessed on 5th February 2016. However, the link was recently removed)

This means that there is less land declared surplus every year over the past 13 years and what was once a growing trend of government possession and distribution has reversed. Source: 1973, 2002, 2007, 2015
(*The data for 2006 were sourced from the website of Ministry of Rural Development, Government of India, from the hyperlink titled “Other Land Reform Programmes”, as accessed on 5th February 2016. However, the link was recently removed)

The slowdown and fluctuations in land-distribution data over the years are usually because of disputes over how much is to be taken away; courts restored some land to original owners; and some land was unfit for cultivation, according to this 2009 report from the Centre for Rural Studies, Lal Bahadur Shastri National Academy of Administration (LBSNAA), Mussoorie.

The surplus land under litigation increased by 23.4% by 23.4%, from 920,000 acres to 1.14 million acres between 2007 and 2009. Some states, such as Kerala, Andhra Pradesh, Tamil Nadu, Karnataka, Gujarat and Maharashtra, created land tribunals to quickly settle such cases.

Irrespective of the fluctuations, the land declared surplus, up to 2015, is 12.9% of 51.9 million acres—almost the size of Gujarat—the land that should be taken away from landlords, the LBSNAA estimated as cited in the report of the Committee of the Committee on State Agrarian Relations and Unfinished Task of Land Reforms from 2009. The land in government possession and land distributed is 11.7% and 9.8%, respectively of the 51.9 million acres that should be declared surplus. Radheshyam, at age 49, has been working in Agra for past two decades to support his family.

Why land is important to further economic progress

South Korea and Taiwan—and Japan before them—implemented sweeping land reforms before transforming agriculture and moving their people to manufacturing, Jayati Ghosh, a professor at the Centre for Economic Studies and Planning, Jawaharlal Nehru University, wrote in this 1997 column in this 1997 column for the Economic and Political Weekly. As agriculture’s importance diminished, agricultural productivity kept rising.

“This was not only because of the institutional changes which released productive energies, but also because of the role of the government in increasing public investment levels in agriculture, providing subsidised fertiliser and pesticide inputs, supporting agricultural research and extension services, assisting in the organisation of co-operatives, and similar measures,” Ghosh wrote. But as India tries to ramp up manufacturing–through programmes such as Make in India–the failure of land reforms may worsen rural poverty.

India has 101 million landless, equivalent to populations of Germany and Sri Lanka

A “large” farmer on average has 45 times more land than a “marginal” farmer, as we already said, and 101.4 million people—equivalent to the population of Germany and Sri Lanka combined—or 56.4% of rural households, own no land, according to the socio-economic caste census 2011.

The surplus land was to be taken away by state governments and distributed to the rural landless, identified by village panchayats. Land ceilings varied by state and land quality.

Data provided is upto December 2015. Information for the remaining states and union territories not given.
Source: RTI Response from Department of Land Resources, Ministry of Rural Development, Government of India

The RTI response received by this correspondent reveals that West Bengal has outperformed other states.

It has declared the most land “surplus” (1.41 million acres, or nearly one-and-a-half times the area of Goa), and accounts for 21% of such land so declared nationwide.

West Bengal has taken possession of 1.32 million acres, 93.6% of land declared surplus statewide, and distributed 1.05 million acres, 79.8% of the land in the state’s possession. West Bengal also accounts for more than half (54.2%) of India’s land-reform beneficiaries. As many as 3.14 million of the rural, landless got free land over 60 years.

The Draft National Land Reforms Policy has credited West Bengal, Kerala and Jammu and Kashmir for having performed best in surplus land distribution.

Jammu and Kashmir is the worst performer, according to data from the RTI reply, which is also riddled with inaccuracies.

These inconsistencies raise concerns over the reporting and verification of surplus land declaration and distribution nationwide.

Sumit Chaturvedi is an independent journalist and a blogger at Opiniontandoor.