Police Use Lathi Charge, Water Cannons to Stop Over 70,000 Farmers From Entering Delhi 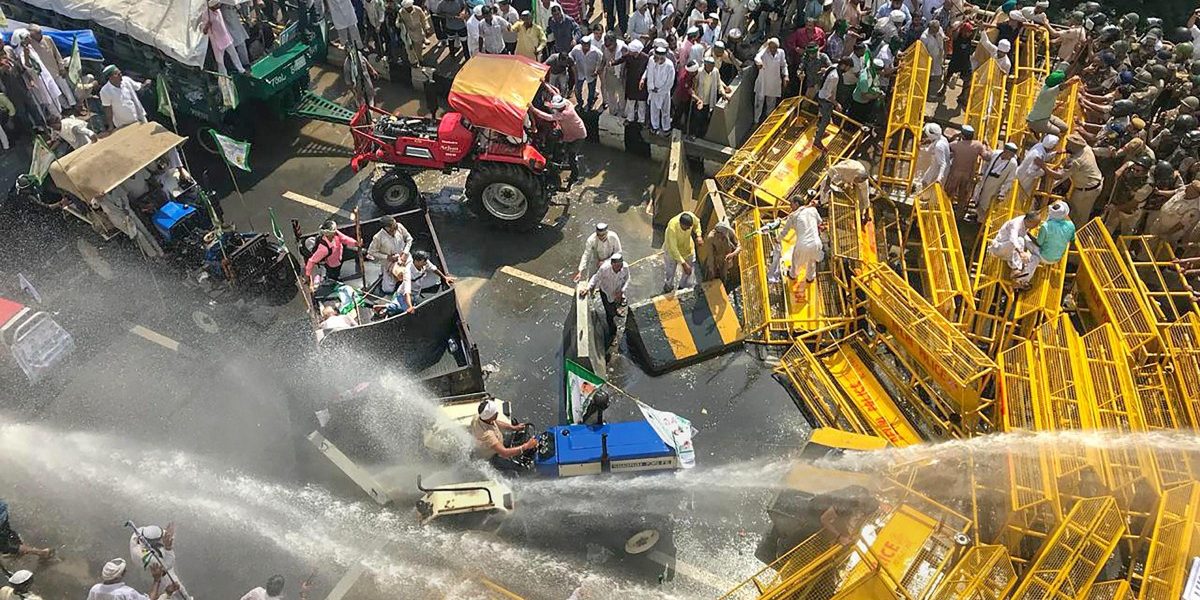 Water cannons being used on farmers protesting in Delhi in October 2018. Credit: PTI

New Delhi: Over 70,000 farmers with a large convoy of tractors and trolleys have been stopped at the borders of Delhi, where the police resorted to water cannons and tear gas firing to contain them. Several farmers have been injured due to the police action.

“Some farmers who tried to break the barricades have been injured when the police lathi charged them and fired tear gas shells,” said Naresh Tikait, president of the Bhartiya Kisan Union.

The BKU, founded by one of India’s tallest farmer leaders Mahendra Singh Tikait, began the Kisan Kranti Yatra from Haridwar on September 23. The march, demanding higher minimum support prices, lower diesel and electricity prices, and a one-time unconditional loan waiver, was scheduled to conclude today at the Kisan Ghat in New Delhi.

#WATCH Visuals from UP-Delhi border where farmers have been stopped during ‘Kisan Kranti Padyatra’. Police use water cannons to disperse protesters after protesters broke the barricades pic.twitter.com/9KUwKgvrwW

However, Delhi police did not want to take any chances and issued prohibitory orders in large parts of Delhi. The UP border has been sealed off and farmers have not been allowed to enter the city. “We tried to enter from the Noida side because someone told us that it was not sealed. But even that side was sealed. We are now sitting here,” said Pradeep Panwar, a farmer who had joined the yatra in Muzaffarnagar.

The farmers are now waiting at different entry points of Delhi. “We are hoping that the police allow us to move forward and register our protest as is our plan. So, we are sitting here and waiting,” said Tikait, the eldest son of Mahendra Tikait and leader of the Balyan khap, influential in western UP.

“The march was proceeding in a disciplined manner. I don’t understand why we have been stopped. If our government won’t listen to our problems, who will? Should we go to Pakistan and Bangladesh?” Tikait asked.

Tikait has assured people, though, that the farmers will not resort to violence. “We do not want any confrontation with the police. We are sitting here peacefully. If the police allows us to enter, we will go. Otherwise we will turn back. But there will be no violence,” he said.