Apple farmers, the backbone of the horticulture industry in the region, say they are facing a tough time since the government imposed a security clampdown in the Valley. 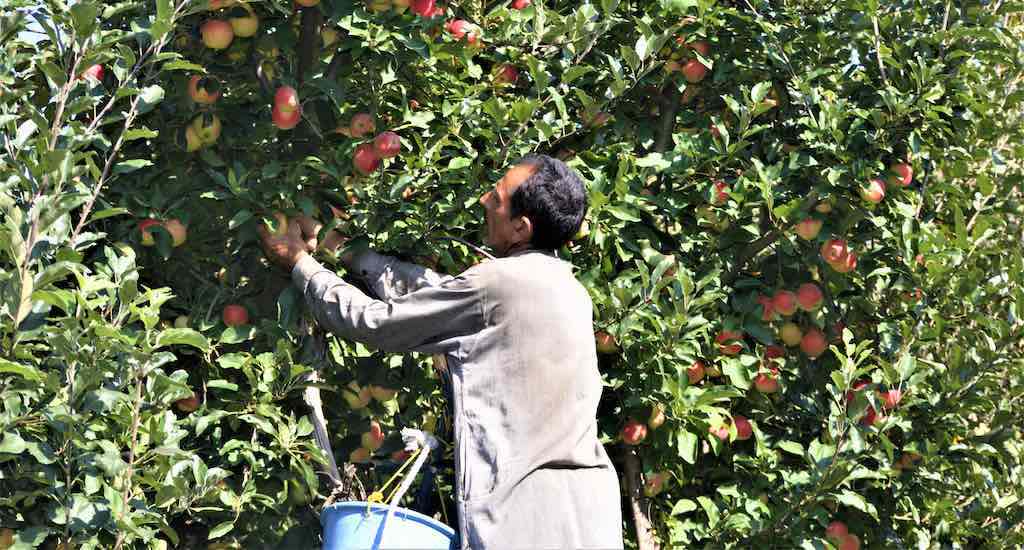 Apple growers in Kashmir are worried that they will suffer losses in the ongoing harvesting season due to restrictions on transportation and communication. Photo: Athar Parvaiz

Anticipating public protests after revoking the 70-year-old Article 370 of the Indian Constitution that gave a measure of autonomy to Jammu and Kashmir, the central government imposed a security and communication clampdown across Kashmir on August 5.

Last week, the government said that it had restored landline telephones, but mobile phone network and internet continue to be blocked for the seventh consecutive week. Ever since the communication shutdown started in the valley in early August, and with no public transport, all businesses and education, and life in general have been disrupted. The government however says the situation is becoming normal slowly.

With no means to effectively communicate with traders and no means to transport their apple and pear harvests, horticultural farmers have been unable to sell their produce, resorting to selling them at a fraction of the usual price.

No market for pears

The worst hit horticultural crop so far is pear, as farmers could not transport the quickly perishable crop to markets on time because of the communication clampdown, especially in the first four weeks, when restrictions on mobility were much stricter.

“We only grow pears, which should be shifted to the market quickly, as their shelf life, especially that of the Babgosh variety, is not that long,” Ramzan, a farmer in Charar-Budgam, told VillageSquare.in. “August is the peak season for pears in Kashmir, but with the shutdown this August, we could not transport the harvest to markets.”

Ramzan’s neighboring farmer wore a despondent look. Most of the farmers who grow pears, mostly in Budgam district, said that they suffered huge losses due to the communication shutdown. “All the markets in Kashmir are closed since August 5. We had no buyers,” said Ramzan.

Officials of Jammu and Kashmir’s horticulture department said that over 50% of pears are sold in markets across Kashmir, and the rest are exported to fruit markets outside Kashmir. According to them, last year the rate of a box of Grade 1 Naag variety was Rs 800 to Rs 1,200 and that of Babgosh variety was Rs 600 to Rs 800.

“Those who sell fruits on roadsides offered just Rs 100 to Rs 300 for a box of pears, which is normally sold at three times this price,” said Ramzan.

The officials said that they were yet to carry out a complete assessment but confirmed that the pear business has suffered because of the clampdown. According to the officials, pear farmers reported a bumper crop this year, with at least 10% increase in the yield. 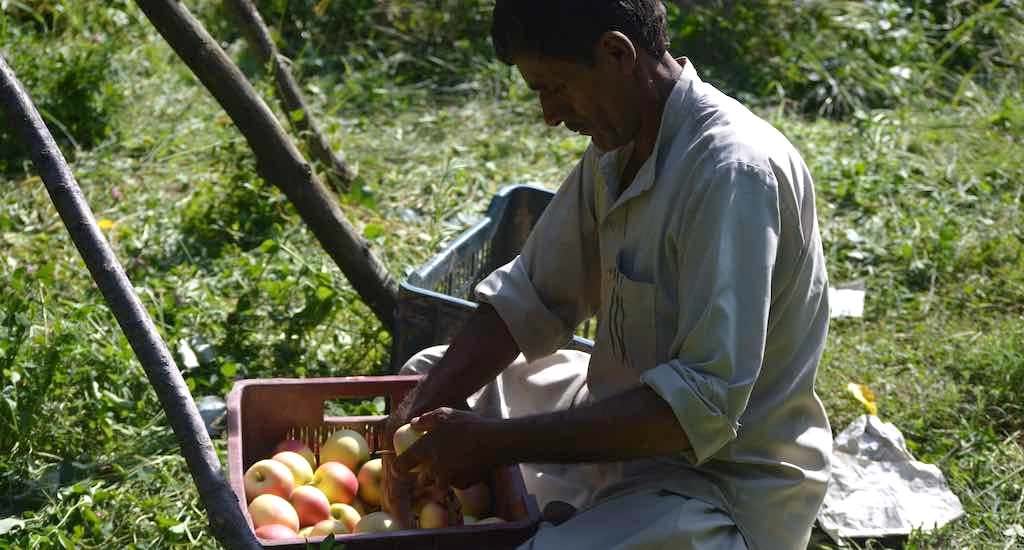 Lack of cold storage facilities has also made it difficult for farmers to sell their apple and pear harvests. Photo: Athar Parvaiz

“You must have noticed roadside vendors selling a kg of pear for Rs 30 to 50,” Abdul Subhan, a farmer in Budgam, told VillageSquare.in.  “Last year, prices of pear had gone up to Rs 90 per kg. This is what the shutdown is doing to farmers.”

Some farmers said that the communication shutdown has affected them in more ways than one.  “Relatives and friends visiting us from the 15th day of the shutdown asked us about our pear harvest,” said Zarina Begam, wife of a progressive pear farmer in Budgam. “I told them that without a clue about our near and dear ones in Kashmir, our pear business was of least concern in this situation.”

Apple farmers are equally worried as the apple harvest season is currently at its peak and will continue till early November. Farmers and fruit traders in Kashmir said they were not able to speak with traders in Delhi, Mumbai, Kolkata and other business hubs across India for weeks together, when landlines were also not functional.

“In today’s world, you can’t trade without communication facilities. But we have been deprived of these facilities. We have neither mobile phone, nor internet connection,” said a trader in Sopore fruit market, requesting anonymity.

Ahsan, a farmer in Bandipora’s Gundjahangir village, said that he has so far managed to dispatch over 300 apple boxes outside the state, but is worried about the apples still on the trees in his orchard that would fill over 1,000 boxes. “I’m not sure what to expect in the coming weeks. The circumstances are not good,” he said.

According to Arjumand Hussain Talib, who has written extensively about Kashmir’s economy, this year Kashmir has had a bumper production of apples and pears worth Rs 9,000 crore because of timely and abundant rains.

“it is the first time in Kashmir’s history that its fruit is falling off or is likely to fall off the trees, and most farmers are watching helplessly,” Talib told VillageSquare.in. “Because of want of necessary logistics at several places in Bandipora, Sopore, Kulgam and Budgam, I saw many farmers selling their fruits for peanuts. Those low prices would barely cover their production and transportation costs.”

According to the Jammu & Kashmir government, horticulture sector contributes significantly to the state economy and is a source of livelihood for 3.3 million of the population. Kashmir produces two-thirds of India’s apples, earning Rs 6,500 crore in exports in 2016-17 and contributing to a 10th of the state’s gross domestic product.

According to the notification, procurement would be made directly from genuine apple growers, and the state administration will ensure direct payment in bank accounts of apple growers through direct benefit transfer (DBT). The notification said that the government had connected the local business with National Agricultural Cooperative Marketing Federation of India Ltd (NAFED).

But apple farmers are not coming forward to embrace the government scheme. Until September 19, as per the officials of the horticulture department, only 400 people in Batingo of Anantnag district, 100 in Nowpora of Sopore district, 50 in Parimpora of Srinagar district and four farmers in Aglar of Shopian collection centers had registered themselves for MIS.

“This MIS scheme does not sound attractive. If we had enough cold storage capacity, we wouldn’t be under pressure to sell our apples in distress,” said an apple farmer of Chura-Sopore. He said that most of the farmers had taken advance from fruit merchants in Delhi and other cities, and so they did not feel the need to register with MIS.

The government has said that the farmers have their choice of selling their produce through MIS or not.  Presently, the cold storage capacity is 100,000 metric tons (MTs) in Kashmir, which, according to experts, should have been enhanced to at least 800,000 MT.

“Cold storage enhances the shelf life of apples by four months. So farmers and traders have the choice of determining the demands in the market. When there is an influx of products in markets, the rates automatically come down to drastic levels. The cold storage helps to address that worry,” said an official of the horticulture department.

According to officials of the horticulture department, over 200,000 MTs have been dispatched out of Kashmir so far. The total production is over 2.2 million MTs. “We only hope that our fruit trucks make it to the markets outside Kashmir,” said a farmer in Baramullah.

This article was originally published in The Village Square