Growing profusely in the state, jackfruit is no longer a neglected crop in God’s own country. 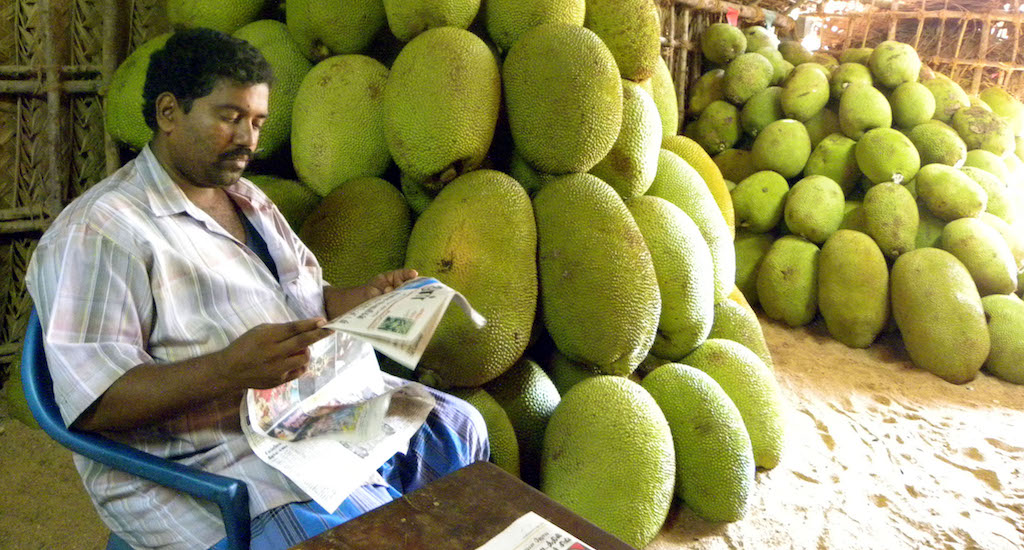 Travelling by road from the Theyyam land of Kannur, meandering the snake bends of Western Ghats to reach Wayanad, haggling with shopkeepers for coffee beans and lemongrass oil at Kozhikode and ultimately reaching Thrissur, home of Guruvayur and Our Lady of Lourdes Syro-Malabar church, a newfound love and enthusiasm for jackfruit (Artocarpus heterophyllus), which the Malayalis fondly call chakka, is quite evident.

Till very recently, every Kerala household with a courtyard, in the villages or small towns, had a jackfruit tree because, its fruit — tender or ripe — was an inalienable part of the Malayali diet with mouth-watering names like chakka erissery, chakka puzhukku,  idichakka thoran, chakka pulukk and several others. It is nothing unusual for a state that is home to 100-plus varieties of the fruit, of which there exists one that secretes sweetness akin to honey.

The world’s largest fruit is called by a variety of names — kathal, panasa, phanas, jaca, nangka, kanoon, mit, etc. Largely due to the odor of the ripe fruit and traditional preference for tapioca, jackfruit never gained popularity in the country unlike in the Far Eastern nations.

It’s only recently that the agro-scientists have woken up to the potential of jackfruit. In 2012, the department of biotechnology, government of India, initiated a five-year long study with University of Agriculture Sciences, Bengaluru, which has led to the identifying of 105 genotypes of jackfruit nationwide. “We have identified 25 varieties from which we nurture saplings and sell it through Krishi Vigyan Kendras and agriculture colleges and have been unable to cope with the demand,” says Shyamala Reddy, a biotechnology researcher with Bengaluru-based University of Agricultural Sciences. 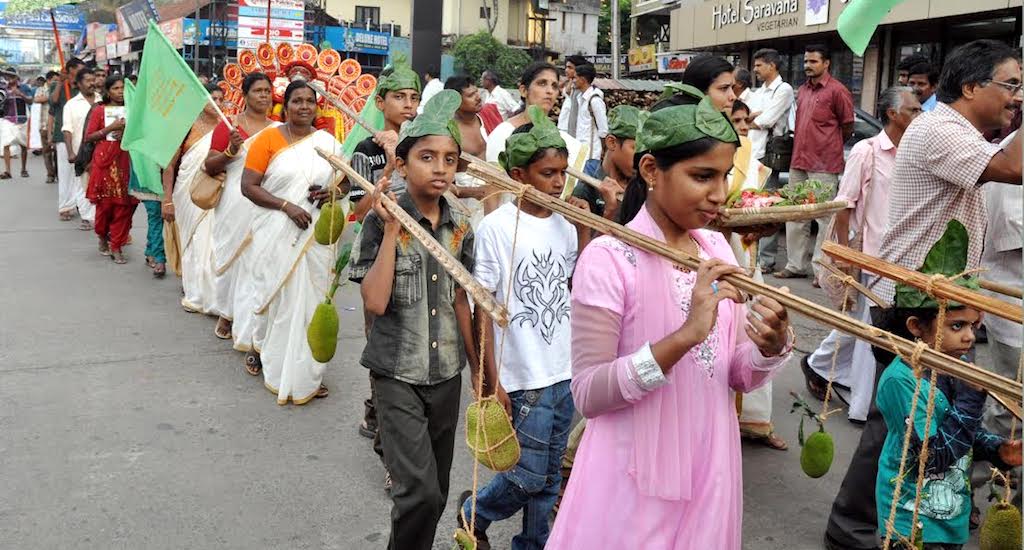 A jackfruit yatra organized by the Jackfruit Promotion Council in Kerala. Credit: JPC

Grown in homesteads mostly without any management practices, jackfruit can be identified as one of the promising fruits grown organically by default. Researchers believe that jackfruit could be a replacement for wheat, corn and other staple crops under threat from climate change. According to Narayan Gowda, ex-vice chancellor, University Agriculture Sciences, Bengaluru, jackfruit is easy to grow, survives pests and diseases and is drought and high temperature-resistant. “It achieves what farmers need in food production when facing a lot of challenges due to climate change,” he says.

While nations, namely Vietnam, Indonesia, Sri Lanka, Malaysia, and the Philippines gave pride of place to jackfruit, it continued to live in ignominy in the land of its birth. Though packed with nutrition and grown with the least human intervention, it was awaiting a change in perception.

“The fest served to not only re-kindle the love of Malayalis for the wonder fruit but also opened the eyes of the civil society as well leading to policy revision and practical steps towards promoting jackfruit and its numerous value-added products,” L. Pankajsashan, general secretary, Jackfruit Promotion Council (JPC), told VillageSquare.

Following the success of the fest, the JPC was formed and the Jackfruit Fest was organized in major districts of the state. The latest Kerala Chakka Vilambara Yatra was flagged off by Chief Minister Pinarayi Vijayan in July last from Thiruvananthapuram. After touring through all the 14 districts of the state, it concluded at Kasargod in December.

A fruit which till now was meant for squirrels, birds, and cattle, and left to rot during the monsoon months, has got a new slogan in Panasam Sarvothamam Tatphalam Sarvaguna dayakam (Jackfruit fruits everywhere and possesses myriad qualities).

Last year, jackfruit growers in the villages of Cherupuzha, Peringome, and East Eleri realised that there is money in jackfruit after having sold jackfruit worth Rs 300,000 to Artocarpus Foods Private Ltd through Thejaswini Coconut Farmers Producer Company (TCFP), a collective of small and medium-holding farmers belonging to Kannur and Kasaragod districts. “Till now, marketing jackfruit was an unheard of concept and most of it was left to waste, but things are changing and now a farmer can get Rs 4 per kg,” Shebi Zacharias, CEO of TCFC, told VillageSquare.

TCFC till recently concentrated only on coconut and coconut-based products, but now has involved its members in jackfruit as well. “As processed fruit gets a better price we are planning a processing unit which will benefit the growers immensely,” Zacharias said.

The story is similar for People’s Service Society Palakkad (PSSP), an NGO working among farmers, has been involved in processing, packaging and branding of jackfruit value-added products since 2013. Its 20 plus ready-to-cook and ready-to-eat products sold under the brand name Jaxo 100 include Jack Wonder Nut Cake, Jack Seed Flour, Dehydrated Ripe Jackfruit and others.

“We received around 160,000 jackfruits between January 2106 and January 2017, brought in by some 4000 farmers which were processed and value-added products made worth over Rs 1.13 crore,” says Shaji Elanjimattam, chief coordinator, PSSP. This is an excellent example of natural resource management because fruits which otherwise would have been wasted were enhanced in value.

According to the Department of Economic and Statistics of Kerala, in 2011-2102 jackfruit was grown in 90,333 hectares, leaving fruits like mango, banana, plantain and pineapple far behind. More ignored than relished, jackfruit till recently was the most wasted fruit in the state. As the fruit is not taken seriously, it’s difficult to pinpoint the volume of wastage.

Known as the hub of volleyball sports, Vettilappara village, neighbor to the scenic Athirappilly waterfall in Thrissur, is the forest-homestead and the orchards belonging to the Ex-Service Men’s Society, formed in 1952, to rehabilitate and resettle Second World War veterans. Here dependents and family members of war veterans tend to their farms growing cashew, rubber, and jackfruit as the Chalakudy River passes by.

Sourcing jackfruits from the farms and neighboring villages, the Society processes it to make products, such as jams, pickle, squash, jelly, halva, juice, flour, etc., and markets it under the brand name Jacus Organica. “We are witnessing a second spring of jackfruit as more and more people are taking to it, leading to the revival of the rural economy,” Joy Pallaty, secretary, Ex-Service Men’s Co-operative Society, told VillageSquare.in. “Earlier a fruit would fetch around Rs 30 but now a grower can easily demand between Rs 100 to Rs 150 per fruit.” 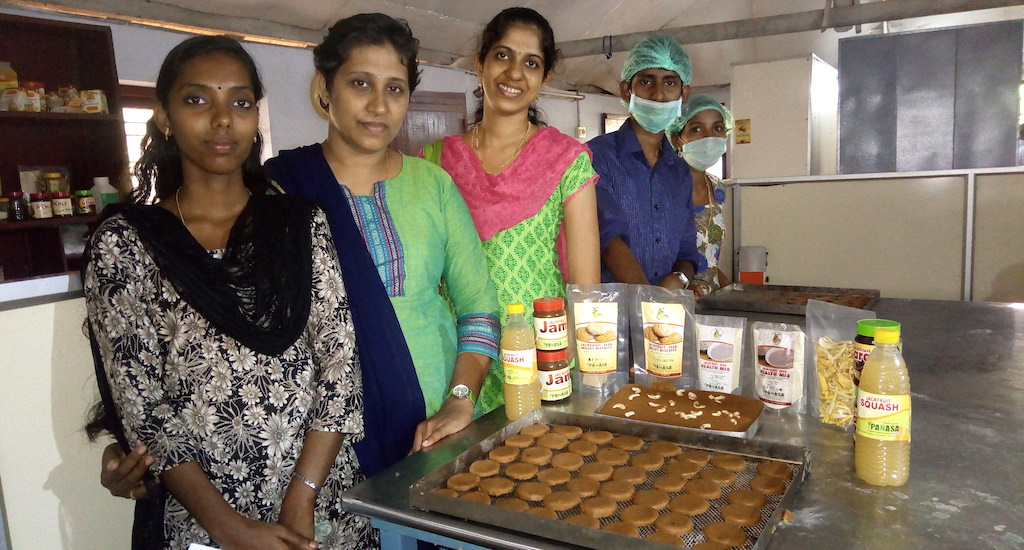 Among his clients are Kerala Cooperative Milk Marketing Federation, Joy Ice creams, Olio Bakers, Lazza Ice Creams, Jumbo Foods, etc. It plans to export processed tender jackfruit in pouches to the Gulf nations, which have a sizeable number Indian expatriate workers. Says Koroth, “We plan to promote the planting of jackfruit trees in households with an offer of buy-back guarantee.”

Joseph freeze-dried the fruit, thus prolonging its availability, and went on to convince leading chefs of Mumbai, Delhi, Kolkata, Bengaluru and Chennai to make lip-smacking delicacies — enough for the national press notice it, including the Discovery Channel, to sing praises about the fruit’s culinary avatars.

A flag bearer of jackfruit, Joseph found that in many instances, where jackfruit, when used instead of rice or wheat, reversed the diabetes condition. A recent study by Sydney University’s Glycaemic Index Research Service mentions that the glycemic load and carbohydrate content is the lowest in

unripe jackfruit compared to rice and wheat. Its high fiber content leads to low absorption of sugar making it an ideal food for the diabetics.

Joseph feels that it’s the diabetics of Kerala who have made jackfruit acceptable as an alternative to wheat and rice for the state holds the dubious distinction of being the country’s diabetic capital with an incidence rate of 138.2 per 1,000 person-years among those in the pre-diabetic stage, according to a study published in International Journal of Diabetes in Developing Countries.

Dwelling on the issue how farmers could benefit from the increasing acceptance of the jackfruit, Sri Padre, editor, Adhike Patrike, who has an encyclopedic knowledge about the fruit, says: “Growers need to organize and have direct market linkage, like the farmers of Toobugere village in Karnataka, have done with little bit of handholding by Bengaluru’s University of Agricultural Sciences eliminating the role of traders.”

Queried as to how state governments could facilitate the cultivation and promotion of jackfruit, Padre told VillageSquare, “The need of the hour is to have Jackfruit Development Boards in States growing the fruit like it is in the case of coconut and spices.”

Hiren Kumar Bose is a journalist based in Thane, Maharashtra. He doubles up as a weekend farmer.

This article was originally published on Villagesquare.in