Is the Result of the Baroda Bypoll an Indication of the Future of Farmers' Agitations?

The Congress has linked its win in the Baroda by-poll to the protests by state farmers against to Centre’s farm bills. Chandigarh: “Congress leaders are liars, the farm bills have had no impact on the Baroda bypolls,” Bhartiya Janata Party’s Haryana chief O.P. Dhankar told The Wire. His party has lost the by-election to the Congress.

The by-poll in question was necessitated following the death of Congress’s sitting MLA Sri Krishan Hooda who has represented the constituency thrice since 2009.

Dhankar added, “Congress had held the constituency for a long time. They have just retained it. This is no victory.”

Congress on the other hand has been keen to link their win to the prevailing unrest in the farming community in the state over the Centre’s disputed agriculture reforms.

Like their Punjab counterpart, farmers in Haryana too have been in protest mode against the bills for over two months, apprehending that they would weaken the MSP-based purchase model and dismantle notified agriculture produce market committees (APMCs) in times to come.

It is in the middle of these protests that the by-poll was held, which the ruling combine of BJP and the Jannayak Janata Party (JJP) lost by a margin of over 10,000 votes. Its candidate Yogeshwar Dutt is a famous Olympian wrestler and JJP is now led by Dushyant Chautala, who belongs to prominent farmer leader Chaudhary Devi Lal’s family.

“The by-poll verdict is an expression of farmers’ anger against the Centre’s three farm laws,” Haryana Congress chief Kumari Selja declared in her media statement. 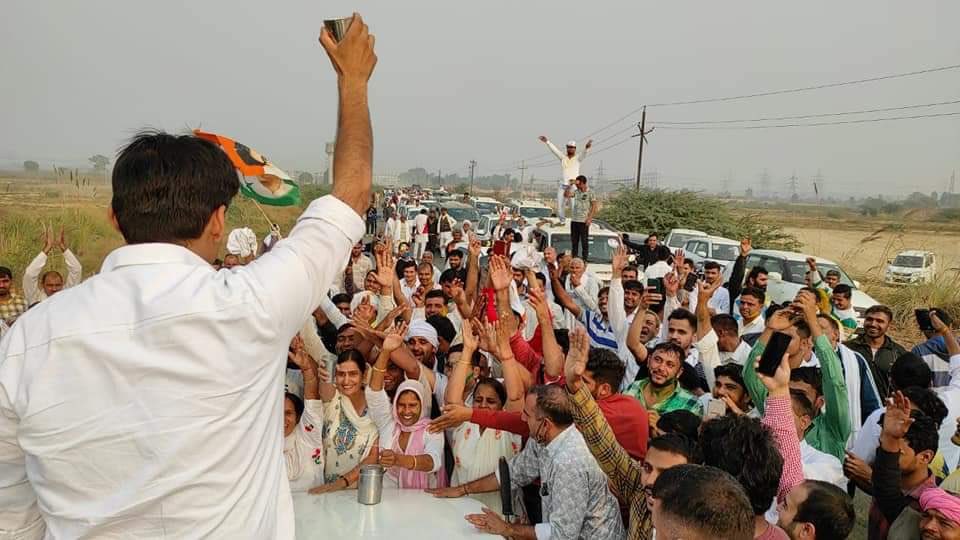 She said that the results have proven that people are fed up with the anti-farm policies of the BJP government both at the Centre and state. “Those claiming to protect the interest of the farmers have also compromised,” she added.

“BJP leaders have said that these acts will benefit farmers financially but no one is explaining how this will happen. Why can’t they make MSP system mandatory if they are so keen on uplifting farmers?” said Selja.

A senior state BJP leader, who requested anonymity, said that farm bills or not, the seat would have gone to the Congress kitty, given that the constituency has the formidable influence of former Chief Minister Bhupinder Singh Hooda who campaigned extensively there in the last two weeks.

A section of BJP leaders also believe that the Baroda outcome is a continuation of Jats’ opposition to the BJP, which rode to power in Haryana on the votes of non-Jats.

But a professor of Indian politics at Chandigarh-based Panjab University, Ashutosh Kumar, told The Wire that no matter who occupied the seat earlier, the party in power always has an added advantage in by-polls. “Voters tend to tilt towards the ruling dispensation as they believe that the opposition MLA will not be able to ensure development work in their area.”

“But if the people of the Baroda constituency made the Congress retain the seat despite tall promises by the ruling government, the message is clear that there is definitely unrest in rural Haryana in the wake of centre’s farm bills,” said Kumar.

‘State not allowing in farmers from outside’

If we keep aside the perception battle that the state unit of BJP seems to have been losing, nothing appears to have changed on ground in Haryana months after the Centre passed the three agriculture Bills, one of which talks about free inter-state trade movement.

Dhankar, a former agriculture minister of Haryana, said one must understand that this bill is for progressive farmers who are interested in direct marketing. “The rest can still bring their produce in government mandis and sell there under the old system. Both MSP and government mandis will stay. The farmers are being misled by Congress,” he said.

But a petition in the Punjab and Haryana high court by an Uttar Pradesh farmer has claimed otherwise.

Virender Kumar, who owns 75 acres of land in village of Chillaur, in Jansat tehsil of Muzaffarnagar in Uttar Pradesh, claimed that he was not allowed by Haryana government to sell his paddy in to Haryana’s Karnal mandi in violation of the new Act.

He said the Deputy Commissioner of Karnal had passed an order on September 23 to stop any farmers coming into the district from Uttar Pradesh with agricultural produce.

“The state government also closed the online registration for farmers from outside the state, that gave permission to farmers to sell their produce in local mandis,” he added.

The petitioner Kumar said all this is being done despite the Farmers’ Produce Trade and Commerce (Promotion and Facilitation) Act, 2020, which allows any farmer or trader to carry on inter-state or intra-state trade and commerce. 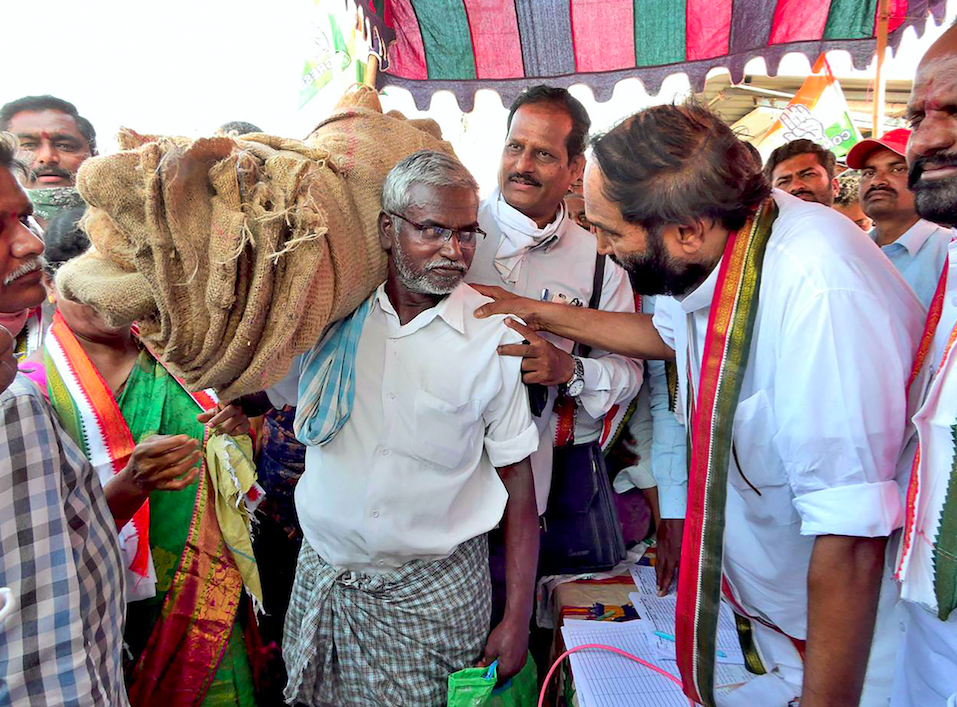 The petitioner also quoted Section 14 of the said Act, which states that the provisions of this act will prevail over anything inconsistent therewith contained in any state APMC Act or any other law for time being in force.

But the state has a different take on this petition.

P.K. Das, additional chief secretary of the Food and Civil Supplies department of the Haryana government told The Wire that the idea of a Central act is that the states will not put barriers if a private trader wants to purchase and a farmer wants to sell his produce anywhere in India.

“But those who are entering Haryana from neighbouring states are not asking for free trade as they want their paddy produce to be sold to the procurement agencies of the state. That, we can’t allow,” he said.

Das added that the state is procuring on behalf of the government of India and the procurement agencies of Haryana are primarily responsible for state farmers.

“Apart from procuring paddy, the state also procures bajra, groundnuts and other crops at its own expense. This means that state’s own revenue is used by local procurement agencies to purchase farmers’ produce at an MSP that is often loss making. I can’t use that money to subsidise the farmers of other states. That will be unfair as the state does not have a mandate to spend the money on farmers of other states,” explained Das.

He added that free trade as per the Centre’s act is about farmer and private trade and not about state-run procurement systems.

“But suppose there is no one who is willing to purchase, the farmer cannot bring their produce into a state and say that somebody must purchase it, that is not the intent of the act,” said Das

“Since some of our commission agents traditionally do business with farmers of neighbouring states, we are extending that courtesy to those farmers who have, for long, been bringing their produce to Haryana.” 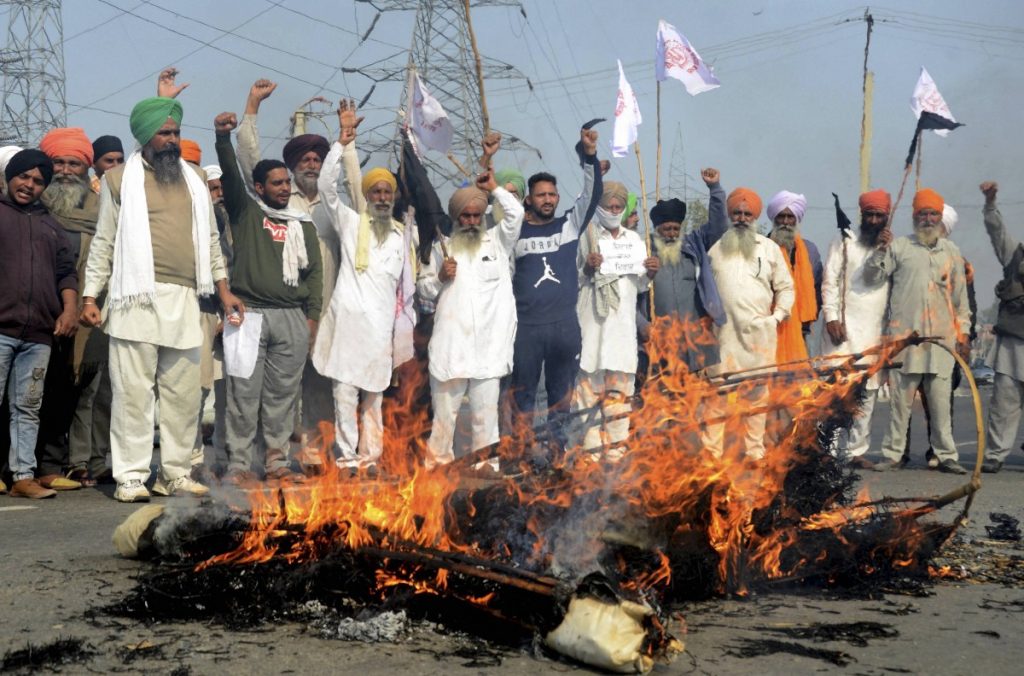 Farmers raise slogans beside a burning effigy during a protest against the Central government over the recent farm reform bills, in Amritsar, Friday, Nov. 13, 2020. Photo: PTI

Das said that his department opened a registration window for such farmers based on the list provided by commission agents, between October 5 and October 16, and allowed them to trade.

But Dr Ram Kumar Khatkar, retired professor of agriculture economics at Hisar Agriculture University said that this is not the way free trade works.

“State procurement agencies may have the right to purchase only from their own farmers but entry of outside farmers in the state can’t be based on certain conditions. Any ifs and buts, if it exists in the system, are against the concept of free market economy,” said Khatkar.

He said that these Central Acts hold if the market works in a transparent manner. “But this generally does not happen. Market forces led by few corporates try to manipulate the market, that is what is being feared by farmers,” said Khatkar.

Senior journalist Hamir Singh too said that the BJP government in Haryana may be hailing the Central laws but they are still hesitant in implementing them in light of the ongoing protest by the farmers.

He said its alliance partner, JJP, is also under pressure to support farmers’ agitation. “Many of their MLAs are openly standing with farmers at protests,” he said

Meanwhile, the high court has expanded the scope of the Uttar Pradesh farmer’s petition by making Punjab, the Union government and Union territory of Chandigarh parties to the case and asking them to file their reply before the next date on December 9.

In its November 12 order, the high court allowed the petitioner to bring his produce within the territory of Haryana or Punjab.

“But this is subject to the condition that he shall not be entitled to sell his produce at any designated grain market, market yard, market place or any other area notified as principal market or sub-market yard of the market, special market or any other place meant and notified for the sale or purchase of the agricultural produce under the Haryana Agricultural Produce Markets Act, 1961 or the Punjab Agricultural Produce Markets Act, 1961.”

Leading the protests in Haryana, Bhartiya Kisan Union president Gurnam Singh Charuni told The Wire that farmers of the state are decidedly unhappy with Central legislation.

“They have made their anger known to the BJP. They will move further away from the party as a major concern is that the Acts will leave farmers at the mercy of big corporates,” Charuni said.

“This is not just our view but leading economists have said this too,” he said.

He said that they have not lowered their guard despite the two dozen criminal cases filed by the BJP government in order to weaken the protest.

A case was also filed against Charuni for using remarks that were allegedly derogatory to Prime Minister Narendra Modi.

“Despite these hardships, our protest will continue till the time the Centre repeals these Acts, and brings an Act to make MSP purchase mandatory to ensure assured returns for farmers,” he added.

He said that he along with other farmers organisations in Haryana are now preparing for a big protest in Delhi for November 26 and 27.