For India's Farmers, Budget 2018 Is Nothing but a Hoax

The finance minister has made a big announcement on minimum support price, but he should make it clear whether all he is promising is to take the prices back to the UPA levels. 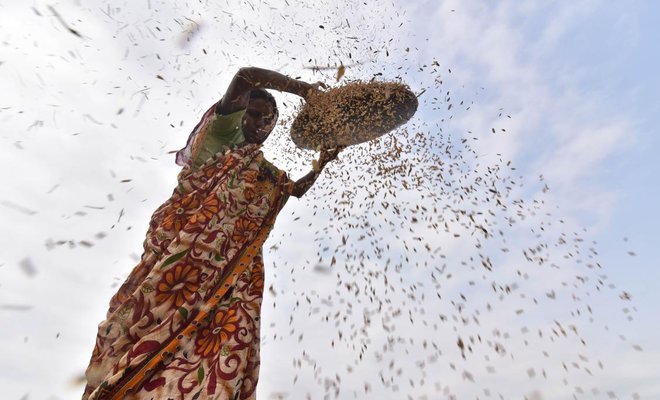 In the three years since the NDA government promised doubling of farm incomes by 2022, the incomes have been stagnant. Credit: Reuters

The government has done it again. Like last year, there has been much hype about a pro-farmer Budget, but in actuality it rests on misleading claims which don’t address the farming crisis. Last year, the agriculture credit target made headlines – not a rupee from the government, but the finance minister made it seem like Rs 10 lakh crore was being given to farmers.

The announcements on the Pradhan Mantri Fasal Bima Yojana (PMFBY) and increased allocation for MGNREGS, too, made headlines. It was later realised that both these schemes are symbols of the dysfunctionality in this government. This time round, the finance minister did not even mention the PMFBY and MGNREGS in his Budget speech. However, this year, the big announcement is about minimum support price (MSP).

Before examining that, it is important to note that as the Budget numbers go, there is little in it for farmers to gain – the numbers are there for everyone to see. Last year, the share of agriculture ministry was a miniscule 2.38% of the entire Budget. This time, it has dipped to 2.36%. Interest subvention on loans got Rs 15,000 crore last year. It remains the same this year. On rural employment guarantee scheme (MGNREGS), the revised expenditure for 2017-18 is Rs 55,000 crore. The allocation for 2018-19? Rs 55,000 crore. The allocation for Rashtriya Krishi Vikas Yojana was reduced from Rs 4,500 crore (RE) to Rs 3,600 crore. The allocation for Market Intervention Scheme and Price Support Scheme went down from Rs 950 crores (RE) to Rs 200 crore.

Yes, there were some routine increases and a few positive announcements on animal husbandry, farmer producer organisations and rural haats. But the actual Budget numbers belie hopes of any big change. The budget for agricultural marketing has gone down from Rs 1,190 crore (2017-18) to Rs 1,104 crore (2018-19). The total budget of the Department of Animal Husbandry, Dairy and Fisheries went up marginally from Rs 2,921 crore (BE) to Rs 3,580 crore. Considering that these sectors contribute 25% to the entire agricultural GDP and provide livelihood to a large section of small and marginal farmers, there is need for much stronger support systems, but this allocation hardly gives that a boost.

What is also completely missing is any step towards providing debt relief for farmers, given that this has been a major demand across the country. This means that the massive debt burden that is pushing farmers into distress and suicides has gone unaddressed. Neither have any steps been taken to bring many excluded sections of the farming community into the ambit of institutional credit, crop insurance and other support systems. This includes women farmers, Adivasi farmers, sharecropper and tenant farmers and landless agricultural workers.

Finance minister Arun Jaitley’s Budget speech had a vague statement that the NITI Aayog will work with state governments on the issue of lessee farmers who lease land for agriculture. However, the model Land Leasing Act enacted by NITI Aayog is so weak that rather than providing any rights to the lessee farmers, it would empower absentee landlords.

On the other side, farmer organisations have been asking for setting up a credit guarantee fund that would encourage banks to extend loans to tenant and landless farmers. But, the finance minister failed to put money where his mouth is.

So, why is the Budget being hyped as a ‘big’ boost to the farmer? It’s primarily because of that one, single announcement – that the government will implement Prime Minister Narendra Modi’s and BJP’s campaign promise of fixing MSP at one-and-a-half times the cost of production. In fact, Jaitley went ahead and said that the government had already provided more than 50% margin over cost of production for most crops this rabi season.

How did this happen? In 2015, this same government had submitted an affidavit in the Supreme Court saying that the demand of MSP at 50% above cost of production cannot be met. The crux of its response was, “… the fixing of MSP is not a ‘cost-plus’ exercise… MSP is recommended by CACP on objective criteria considering a variety of relevant factors. Hence, prescribing an increase of at least 50% on cost may distort the market. A mechanical linkage between MSP and cost of production may be counter-productive…”

In May 2017, Union agriculture minister Radha Mohan Singh said that Modi never promised 50% increase in support price. Interestingly, this is the first time that the government has admitted, through the Budget speech, that the PM did make this promise on MSP.

But, how is it that the government is now saying that not only will they use one-and-a-half-times the production cost as a “pre-determined principle” for MSP, but also that they had already done this for the rabi 2018 MSPs, which were announced back in October 2017? This is strange, because the government could have projected three months ago that they have already delivered on their election campaign promise. Then why didn’t it? 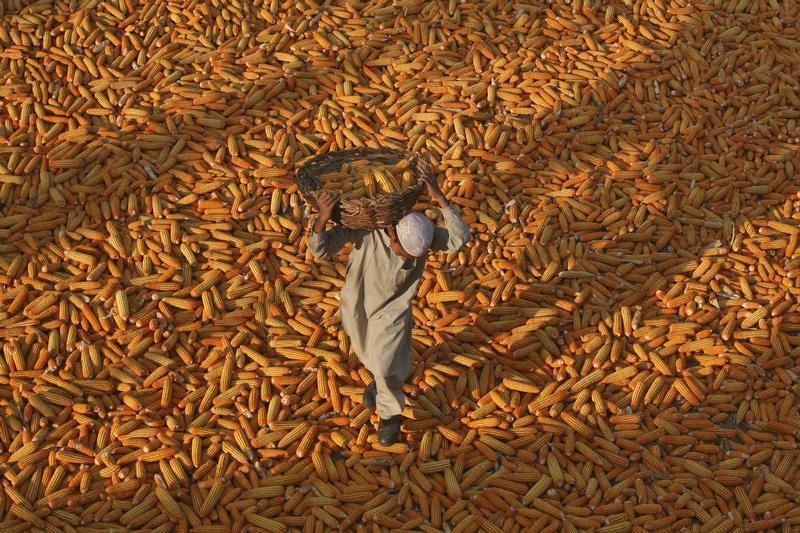 The massive debt burden that is pushing farmers into distress has gone unaddressed. Credit: Reuters

The brief answer is that the government decided to use a different formula before this Budget session itself. They changed the baseline measure of production cost from “C2” cost, which has been the basis of farmer organisations’ demand for a decade, to A2+FL, which is a lower cost measure. Obviously, if a lower measure for cost of production is used, it is easier to provide 50% margin above that.

MSP and production cost: C2, A2+FL and all that

Now to the details. Since 2006, farmers’ organisations have been demanding that the MSP should be at least one-and-a-half times the “C2” production cost, based on the recommendations of the National Commission on Farmers. Professor M.S. Swaminathan, who headed the commission, has stated clearly that the recommended formula is at least 50% above “C2”.

The Commission for Agricultural Costs and Prices (CACP) uses C2 as a comprehensive cost measure, which includes the imputed value of land rental and interest over working capital, and fixed capital. As intermediate components, CACP computes various values, such as A1, A2, B1, B2 and A2+FL. In fact, when CACP calculates the “returns to farmers” provided by the MSP, the margin over A2+FL is called “gross returns” and the margin over C2 is called “net returns”.

Going beyond the formulas and mathematical terms, everyone with an understanding of household economics knows that “net income” is what matters. The same is true for farmers – their demand has been around net returns over C2, not gross returns. When the BJP and Modi sought farmer votes, they referred to the Swaminathan Commission recommendations, which is understood as one-and-a-half times the C2 production cost.

It is important to understand that the difference between the gross returns over A2+FL and net returns over C2 is not a matter of nitpicking. Let us take the top 12 crops whose area of cultivation is above four million hectares (the rest are all below one million hectares). Out of these, sugarcane doesn’t come under the MSP regime because there is a different system of statutory minimum price.

See the table below with the 11 crops ranked in terms of area of cultivation so that the relative impact on farmers can be judged. Columns 4 and 5 show the average net returns over C2 production cost during the Congress-led UPA-II regime between 2009-10 and 2013-14, and during the BJP-led NDA rule between 2014-15 and 2017-18. The next two columns show the average gross returns over A2+FL. The bold items show the cases where average returns under the NDA are less than the average returns under UPA-II.

Three key points need to be noted. One, whether you take C2 as baseline or A2+FL is what makes a big difference to the estimated returns. Gross returns in cotton in the past four years are 39%, while the net returns are only 2%. Whether you make 39% profit or 2% profit is the difference between being able to feed your family and committing suicide. So, it is not a matter of quibbling over minor details.

Two, the average returns in all crops (except net returns on tur) have been significantly lower in the past four years, compared with the previous five years under UPA-II.

Most importantly, if the Bharatiya Janata Party always thought that A2+FL was the right measure for production cost, then UPA-II was already providing more than 50% margin in all major crops, except maize (almost there at 46%), groundnut and jowar. So, why did the BJP and Modi go around the country in 2014, holding rallies in rural India and saying that the MSPs were too low and that it is they who would provide one-and-a-half times the production cost, if voted to power? Paddy was already providing 69% returns, wheat 112% returns, cotton 80%, soyabean 50%, chana 76%, tur 63%. So, who were they promising 50% returns?

Also read: How Long Can India’s Farmers Subsidise the Nation?

The third key question is whether farmers will get the MSP, regardless of what MSP is declared. It is estimated that in the kharif 2017-18 season alone, farmers lost Rs 32,700 crore because the actual prices are below MSP. The Budget speech simply states that NITI Aayog is working with the states to come up with a mechanism for market intervention and procurement, which will ensure MSP. However, the Budget allocation for the the Market Intervention Scheme is a meagre Rs 200 crore, which is a pittance compared with the shortfall from MSP in just one season, as mentioned above.

What this means for farmers

The crux of the matter is that farm gate prices were inadequate during UPA-II regime, too, leading to low incomes, debt and distress. The prices under NDA have only become significantly worse in the past four years. After all the agitations and protests in the past year, the farmers hoped that the government would make some amends in its final year before the general elections in 2019– but in real terms, not just rhetoric and technical jugglery.

Ultimately, what matters is how this will improve farmers’ incomes from where they are now. The MSP announcement will not make any difference to farmers growing wheat, chana, mustard and so on, because their prices are already above the 50% margin, as per the minister. If you look at the kharif crops, paddy MSP would go up 8% from Rs 1,550 a quintal to Rs 1,675 a quintal. Bajra, tur, soybean and urad would remain at the same level. Maize would go up 10% and cotton 14%. It is clear that all this will only make a marginal difference to farmers’ incomes.

In the end, it is important to come back to the starting point. In the three years since the Modi government promised doubling of farm incomes by 2022, the incomes have been stagnant. The Economic Survey 2018 has highlighted that the farmers are in crisis, their incomes have not increased, their prices are low, they are in deep debt and their income may go down by 20% because of the effects of climate change. So, will this Budget take the farmers a significant step towards doubling of incomes? The answer to this needs to be very clear for farmers, and all those who want to see a better future for the Indian farming community.