With the ECA Defanged, Can India’s Competition Laws Ward off Potential Trouble?

Without rules against vertical ownership, the creation of oligopolies could push food prices out of reach for a majority of Indians.

As India dismantled the Essential Commodities Act last year and invited foreign direct investment (FDI) into the food and farming sector, one question remains unanswered, are Indian competition laws mature enough to prevent an oligopoly in the sector?

After all, the memory of 2.5 lakh crore Dal scam is still fresh, where investigations by the income tax department indicated that the sudden spike in the prices of particular pulses in 2015 was a consequence of the formation of international and Indian cartels of traders.

Today, four commodity traders without owning any land (through contracts) control over 85% of the world’s grain. The total revenue of the leading six agricultural commodity traders was $377 billion in 2018, which was higher than the combined revenue for the global markets for seeds, pesticides, farm equipment and fertilizer in the same year.

How a handful of firms control food from farm to fork

But when it comes to food oligopolies, the US is our lodestar, as four corporations control over 84% of the total food. For example, the US meat industry, apart from terrible working conditions and underpaid workers, also boasts that “79% US beef, 65% pork, and 57% poultry” come from four corporations. Thousands of brands at the grocery supermarkets are owned or supplied by the same companies, in fact many of the supermarkets are also owned by the same people. So the complete link from seed to plate is vertically integrated and owned by a handful.

But are the American farmers better? The book Slaughterhouse Blues answers this question: “most of them don’t really own the animals they raise. Virtually all the chickens sold in the US are grown under production contracts to a handful of companies, who own the birds from egg to supermarket.”

Further, in the last ten years, retail meat prices increased by over 40% and simultaneously, gross farm income for small- and medium-sized pig and cattle farmers fell by 32% and 71%. Chicken farmers lived under the poverty line. It’s no secret that many Iowa farmers own about 20% of the land they farm, while 80% is rented. They are better described as tenants or farm-hands.

The US government did bring out the Sherman Antitrust Act in 1890 to prevent monopolies in the beef, meat, etc industry, but the Ronald Reagan administration changed this to accommodate relaxations if the “proposed merger promised to lead to greater marketplace ‘efficiency’”. Barry C. Lynn’s Cornered: The New Monopoly Capitalism and the Economics of Destruction is a good read to understand these changes.

Unfortunately, Reagan’s measures were counterproductive. By 1995, the Department of Justice had filed 126 criminal cases against 73 corporations and 80 individuals in 18 states, resulting in fines totalling $59 million; 29 saw jail time. The corporations were alerted and changed their “efficiency” tactics. They started using vertical integration and mergers to escape antitrust probes.

Big Ag new tactics involved “deals” of various kinds – joint ventures, strategic alliances, intellectual property swaps, employee swaps, cartel arrangements and more. But the trump card was horizontal shareholding by giant institutional investors, aka asset management firms. With the information of their shareholder private, the top six of asset management firms together own majority stakes in the global seed to agro-chemical to grain supply. They buy shares of competing companies and also aggressively increase their investments in all segments of the food chain. Vandana Shiva’s Oneness vs… the 1% gives a detailed analysis of new threats to the food system.

But the US is not alone, all across Europe, North America and even in Japan, a handful of corporations control the major supermarkets and grocery stores. A 2014 OECD report on competition issues in the food chain industry highlights “countries like Japan, Finland, Italy and Hungary consider that traditional competition policy tools are not enough to deal with issues of buyer power and unfair trading practices.” Thereafter, special laws were enacted to even consider 30% share as a dominant position in some countries.

Given our poor performance in the hunger index, India must be very cautious for food is not industry and “agri-dollars” only, it is a matter of survival and national security. 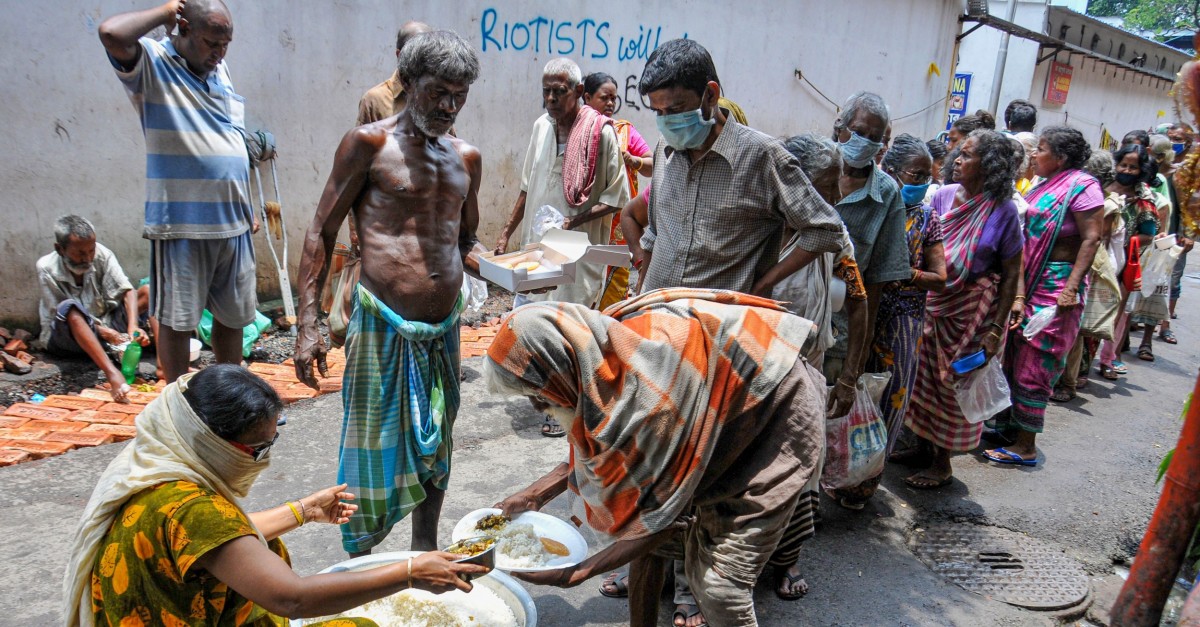 Volunteers distribute food among the needy in Kolkata. Photo: PTI

What options should India consider for its FDI policy in the retail and food sector? One option, like other sectors, is to introduce clauses for compulsory regional partnerships in states of operations. The Competition Commission of India (CCI), after understanding the global scenario, could also adopt a maximum of 25% market share as a dominant position, bring rules against vertical ownership/integration to allow for a healthy competition and ensure a real-time assessment of market share.

As most of these firms are invested in the seed to the supermarket, a new paradigm is needed to prevent monopolies and ownership of the food sector by a handful of assets management firms.

The CCI has already had an acidulous tryst with a foreign seed company refusing to comply; the case is being heard in the courts. One begs the question will the CCI have powers to effectively probe foreign corporations in the future too? The days of traditional tools to check competition in the food sector are redundant, CCI needs to evolve too if it wants to safeguard the sector.