As a society, we should be ashamed that year after year, farmers beg for a decent livelihood and are forced to take their lives. 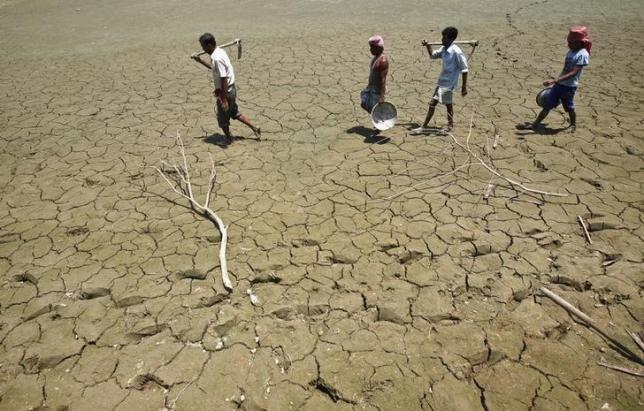 Farming is widely recognised as a high risk venture and our farmers have had to grapple with adverse and unpredictable climatic conditions (drought, hailstorms, unseasonal rains, cyclones), unforeseen loss of crop (wild animals, technological failures, lack of irrigation) and a near complete absence of a supportive eco-system (lack of government support, non-remunerative prices, increasing input costs). All this has severely affected the farmers, who struggle to etch out a living.

Consider the findings of National Sample Survey Organisation’s (NSSO) 70th round: the average agricultural income (including livestock) per household is merely Rs. 3,800 per month. Even if this is complemented by income from other sources (as farmers are forced to do), our farmers still get Rs. 6,400 per month. Compare this to the mandated minimum salary of a government employee, which at Rs. 18,000 per month is nearly three times higher than what a farmer earns on average. Culturally we have hailed farmers in India as annadatas, and blessed them with annadata sukhibhava (“May you prosper, provider of food”). Why then are we so indifferent towards their plight? Despite the fact that we depend on them for one of our most primal needs, why do we relegate farmers to the periphery of our consciousness?

As a society, we should be ashamed that year after year, farmers beg for a decent livelihood and are forced to take their lives. The farmers naturally turn to the government for succor because we so callously ignore them (even though they have such an organic relationship with us). The government in turn not only caricatures their concerns but also slashes support for farmers by “rationalising subsidies”. The government has also suggested that farmers shift to the manufacturing or service industries, for that will aid in the “structural transformation” of society (from agriculture to manufacturing and then to services, as Simon Kuznets – an American economist famously propounded). In our crazy rush to emulate the development path of other countries, what the government forgets is that India has skipped the classical pattern of structural transformation and it is our services sector (sectors like IT, telecom and finance) that accounts for over two-thirds of our GDP.

Does our government honestly expect that these low employment intensive sectors will be able to absorb nearly 50% of our workforce? And does it really think that farmers will be able to work in highly technical sectors without any prior training or education? In actuality, what ends up happening is that farmers are forced to migrate to urban centres (partly by a hostile and non-supportive ecosystem that treats agriculture with disdain, and because of the lure of a better life), where they end up living in miserable conditions as daily wage labourers.

A government really concerned about the enormity of the problem would have tackled the problem in a two-fold manner. Firstly, it would have sought to arrest distress migration with a scheme like the Mahamta Gandhi National Rural Guarantee Programme (MGNREGA), which not only creates a healthy wage market (between 1999 and 2004, nominal wages in the rural economy grew at a glacial rate of 2.7%. In stark contrast, because of MGNREGA, average wage rates almost quadrupled to 9.7% between 2006 and 2011. Consequently, the average wage rate increased from a mere Rs. 65 in 2004-’05 to Rs. 162.5 in 2013-’14), but also provides sustainable employment in times of need. It is extremely telling that in 2013-14, five crore households complemented their incomes with employment from MGNREGA.

Secondly, through a comprehensive support system, the government should have sought to institutionalise a minimum income level for all farm households, not by 2022 (as the NDA so vaguely announced) but immediately. This can be achieved if the government undertook the following steps on mission mode:

In stark contrast, the NDA government has done everything in its power to destroy agriculture and rural India. It tried to first restrict the MGNREGA to less than 1/3rd of all districts in the country, then tried scrapping it entirely. Furthermore, it delayed sanctioning monies to states (for wages and asset creation) and proposed to increase the share of material expenditure from 40% to 49% (this would have resulted in more work being done by heavy machinery, thus reducing employment). Equally important, despite all its efforts to regain some credibility as a pro-farmer government, the Modi government has done nothing to revitalise the agriculture sector. It tried to implement an extremely anti-farmer land acquisition act (and then ordinance) and has gone ahead to prod states to do that anyway. It announced meager increases in MSPs (despite exaggerated claims during elections) and disallowed BJP ruled stated from giving bonuses over and above the central MSP rate. It deliberately compromised the interests of Indian farmers at the World Trade Organization (WTO) and has given inadequate support for drought relief (the Supreme Court had to pull up the government to perform its duty). Finally, it slashed budgetary support for agriculture and then audaciously tried to claim otherwise by statistically fiddling with statistics.

Every Indian has a right on the fruits of growing prosperity, farmers especially so. We need to ensure that our farmers have equal opportunities to a life of dignity and security and have access to a better life. Unless we support and empower them, we cannot progress as a nation. As Jawaharlal Nehru once said, “everything else can wait, but not agriculture”. Let us hope the NDA wakes up to this.