The pink bollworm attack has left deaths by suicide in its wake. The authorities, farmers say, are late in even conducting preliminary surveys. 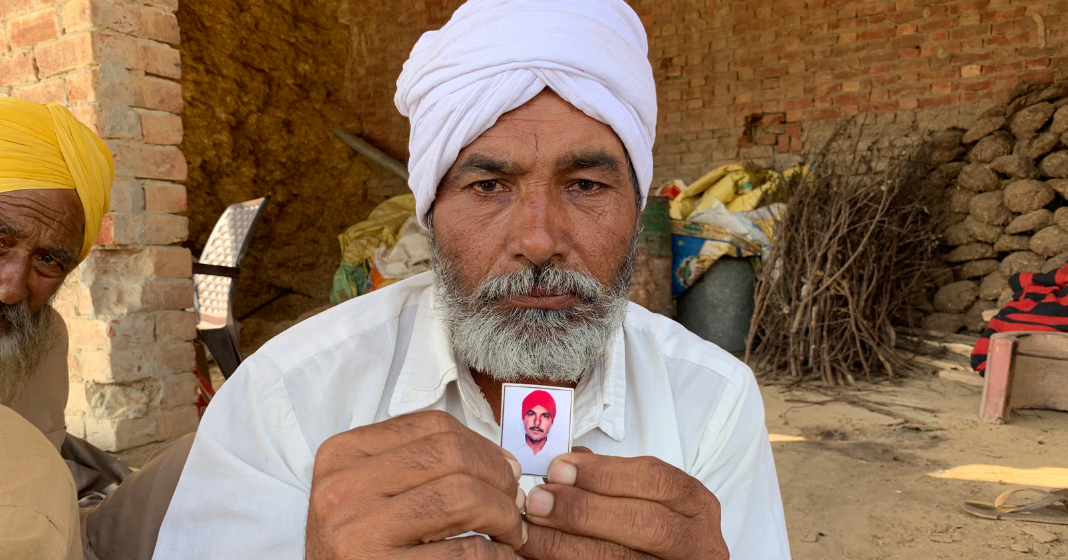 A farmer holds the photo of his brother, Gurpreet Singh, who took his own life after his cotton crops were devastated in Moosa village of Mansa district in Punjab.  Photo: Prabhjit Singh

Mansa (Punjab)/Fatehabad (Haryana): There is silence in the cotton fields of Punjab and Haryana where farmers are uprooting plants after having sprayed multiple rounds of pesticides in vain.

The pink bollworm has ravaged cotton crops in the country’s north, mainly in the districts of Bathinda and Mansa in Punjab and Fatehabad, Sirsa and Hisar in Haryana.

In 2017, a similar devastation took place in the Vidarbha region of Maharashtra that triggered the debate on the sustainability of genetically modified seeds for this ‘white gold’.

Many farmers have complained of up to 100% crop loss due to the pink bollworm attack. It has also furthered incidents of deaths by suicide among farmers in Punjab’s Malwa region (Mansa and Bathinda).

Gurpreet Singh, a 43-year-old farmer in Moosa village of Mansa district, on October 22 consumed pesticide tablets, commonly known as ‘sulphos’, after returning from his five-acre cotton field which was devastated by swarming armies of the pink worm. Apart from an institutional debt of Rs 3 lakh, he had taken a loan of Rs 4 lakh from moneylenders over the past several years to survive in farming as it is his family occupation.

Local newspapers reported two more incidents of deaths by suicide in the cotton belt on a single day on September 28, 2021 – Jaspal Singh, whose 2.5-acre land was notified for public auction as he had defaulted on bank loans of up to Rs 15 lakh in Chatthewala village and Gurmeet Singh, a farm labourer who had taken a chunk of land for contract farming in Cheema village.

“The incidents of deaths by suicide among farmers go up in November-December, when officials from banks and moneylenders make rounds through all the houses of defaulters after the harvest (of Kharif crops cotton and paddy),” social activist Kiranjeet Kaur Jhunir told The Wire.

“If we look at the official survey conducted by three universities in the three districts of Mansa, Bathinda and Sangrur, from 2002 to 2015, there were 16,606 deaths by suicides, which means at least three suicides took place a day,” she pointed out.

At Mansa’s Bhamma Khurd village, Jarnail Singh had flattened two acres of his destroyed cotton field. Leaves then became fodder for the cattle. 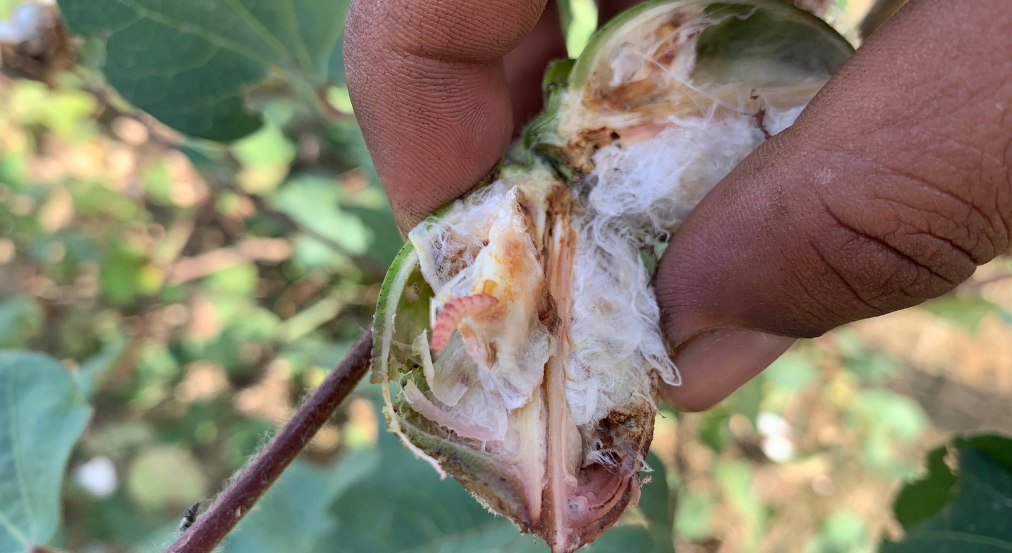 A farmer shows a pink bollworm inside the peeled off boll at Bhamma Khurd village of Mansa district in Punjab. Photo: Prabhjit Singh

Jarnail’s co-farmer Harinder Singh said the signs of devastation were visible in the last week of July with the small bolls leaving black spots as possible entry points for the caterpillar-like animal. “We noticed the pink bollworm inside the bolls more than a month back, and the panic spread, but it was too late to react to the situation,” he said. “Even after two months of much hue and cry, the authorities are silent, and the seed suppliers said they were helpless; it is no fault of theirs.”

Expressing his disappointment over government measures to tackle crop failure, Jasbir Singh of Talwandi Akkali village said, “We were supplied bad seeds, it is clear, and this could be intentional, to weaken farmers,” he said. He was lucky to sow paddy on nine acres. The two acres on which he cultivated cotton are devastated.

In Danewala village of Mansa, Rashpinder Singh (26), a cotton grower, also ate pesticide tablets after returning from his 11-acre field which was entirely affected. His bereaved brother Jaspreet Singh said that they had sprayed six rounds of pesticides in a span of 45 days to save the crop but the pink worm had done its job by then.

“We took another Rs 50,000 from a moneylender to purchase pesticides after the two initial rounds of spray didn’t work at all,” he explained, adding that they already have a Rs 4.6 lakh bank loan to pay off.

Singh took his life on October 3. 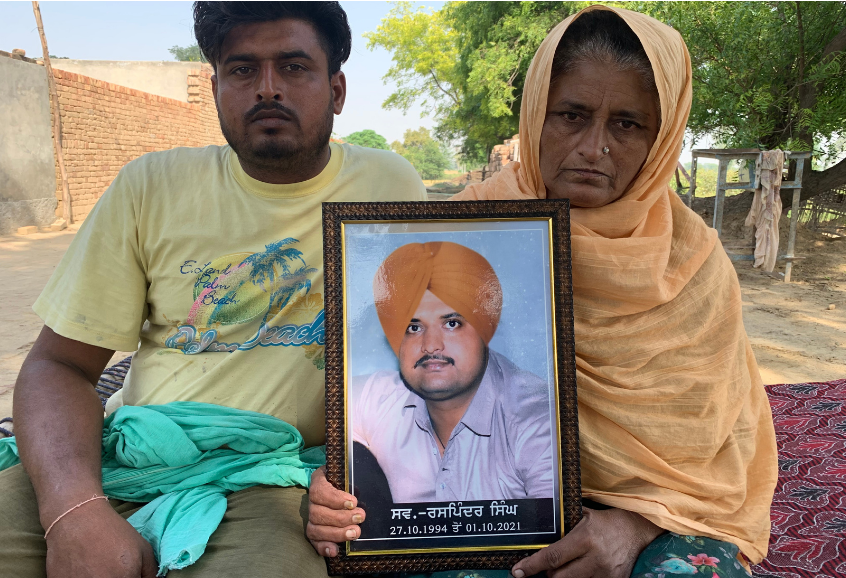 Jaspreet Singh along with his mother hold the photo of 26-year-old Rashpinder Singh who died by suicide in Danewala village of Mansa district in Punjab. Photo: Prabhjit Singh

On October 7, in Kalanwali village of Muktsar district, another cotton grower, Ranjit Singh, also died by suicide. He had only 1.5 acres of land. Similarly, another farmer, Darshan Singh of Ghudduwala village in Mansa, died by suicide on October 6.

“The officers from the department came here in July-end when we raised an alarm after seeing spots on the boll, but they said the spots were minor, only 10%,” he said, adding that they all were taken aback when the cotton partially bloomed during the first harvest.

“We could take out only 10% of cotton in this first picking, and you can see now that there is no cotton for the second pick,” he explained. The farmers ideally go through three phases of picking the Bt cotton crop that begins to bloom in the second fortnight of September. “Nobody here crossed 120 kg, that is a mere 10% of the ideal yield in the first pick and that too from plants that were partially rotten and infested with the pest,” Singh said.

What the preliminary official report says

“A combination of predisposing weather conditions which were favourable for the pest and unfavourable for control measures led to sudden, heavy infestation in the final stages of crop despite all possible measures, rendering the losses unrecoverable through any crop-based intervention,” stated an official preliminary report of the experts committee. The Punjab government notified this report on September 30.

“In many cases, in districts of Bathinda and Mansa, losses were above 75%”. The report, however, was silent on the minimum losses the farmers suffered at various places.

The experts panel from the state department of agriculture and the Punjab Agriculture University (PAU) ruled out any flaw in the Bt seed and concluded: “Varietal differences, or mixing of Bt seed with non-Bt seed (within a seed packet as per guidelines) did not affect pink bollworm incidence level.” This statement, however, contradicted the earlier version of PAU’s Bathinda regional centre director, Paramjit Singh, who stated that the “pest larvae are reaching the state with cotton seed consignments from south-west states, including Maharashtra and Karnataka”.

Navtej Singh Bains, one of the team members and plant breeder scientists at PAU, said there is no possibility of a Bollguard-3 seed that could resist the pink bollworm for at least next two years. The pink worm was detected at the fag end of the cotton belt in some villages last year. “It was at Jodhour Mana and Gurusar villages of Bathinda district where the pink worm attacked the crop in the third phase of picking, and we had then tested the seed and found it was indeed Bt,” he replied when asked about farmers’ doubts regarding the genuineness of the Bt seed since the attack.

“The pink worm outbreak on Bt had come up much earlier, in 2014, and the worm attack first arrived on a large scale in southern states like Maharashtra in 2017 and 2018,” he said.

“Monsanto’s trials for the Bollguard-3 seed to resist pink bollworm at the PAU continued till 2015 and then wound up midway due to an issue of patenting,” he informed.

A mere 40 kilometres away from the Haryana Agriculture University at Hisar, Kailash Godara, a farmer in Sulikhera village of Fatehabad district, stood lost in despair in the thick of the dry shrubs of his devastated cotton field. The 55-year-old farmer said he has seen such a “caterpillar attack” on the Bt cotton for the first time in his life. He too expressed doubts that this was the Bt seed, and said that when he complained to the dealer about the worm attack, the dealer said could not do anything about it.

“This never ever happened before, the ‘sundi’ (caterpillar) never earlier attacked the Bt crop,” he said. 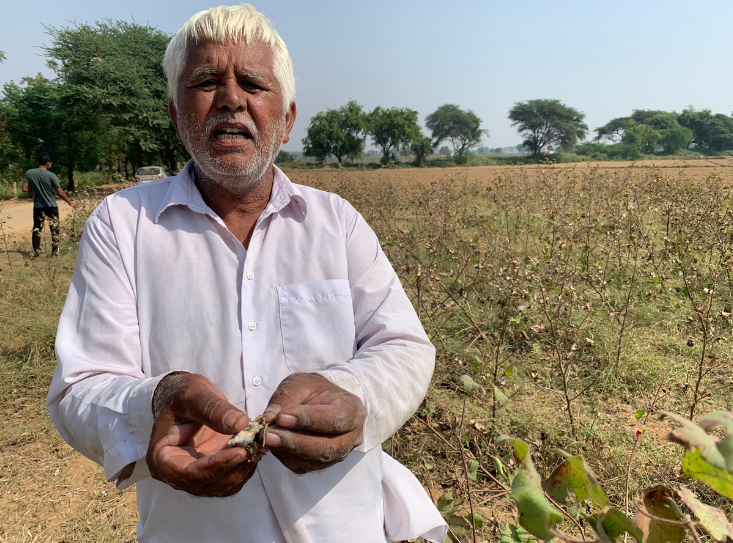 Kailash plucked a dry and dead boll from a branch, peeled it off and showed the rotten brownish stuff inside as damaged by the pink worm. Photo: Prabhjit Singh

In an adjoining field in Sulokheri, a young farmer, Rajiv Sinchar, also expressed anger with the agriculture department, and asked whether the seed they used was Bt or not.

“We observed the worm attack in the second week of September, and we found it was a pink worm inside the boll. Panic gripped farmers,” he said. He alleged that the department of agriculture knew in August about the boll worm attack but that “officials kept quiet about it”.

“We were told we got Bt seeds, and even our elders in the field have never seen such a worm attack on Bt cotton. We went in groups to the district agriculture officer but they were silent on the issue,” Rajiv said.

“There is now a survey taking place. But how would the department assess the losses if the officials arrive here so late?” Kailash asked, pointing out that there wouldn’t be any sign of the cotton devastation as farmers would soon be clearing their fields to sow wheat in the first week of November.

Kailash narrated his financial situation – a farm loan of Rs 2.5 lakh from a bank and a debt of about Rs 60,000 from private moneylenders. “I had great hopes from the cotton yield this time but I am ruined now with no money for the heavy loans,” he said.

Rajiv asked, “The Hisar Agriculture University is hardly 40 kms away from this place but can someone tell us how that university has benefitted us so far?” He said there was no regulation of seed distribution either. “Had there been any accountability of such universities or the (agriculture) department, then we wouldn’t have been dependent on private seeds suppliers.”

Several farmers also complained about insurance companies refusing to pay for crop loss in the past. “I pay Rs 1,680 per acre after every six months for crop insurance, but nobody turned up even after a month of my claim submission against this crop loss,” Rajiv further said.

Dilip Kumar, another farmer in Fatehabad who also suffered heavy crop loss, said he approached the local patwari (a village registrar) four times this month for a girdwari (official survey to assess the losses) for his crop insurance claim but nobody has turned up so far.

The Haryana agriculture department officially declared the outbreak in mid-September, but no official response has come up so far in terms of compensation for the crop loss to the farmers.