While the opposition blamed the Narendra Modi government for what they called "brutal police action" against farmers on the way to Rajghat on Gandhi Jayanti for a peaceful protest, the police said it used "minimal force" to disperse the crowd and to maintain law and order in the national capital.

New Delhi: It was a sorry sight to see thousands of protesting farmers hit with water cannons and tear gas as they attempted to enter the capital to make their protest against the government heard on October 2. But the occasion of Gandhi Jayanti and its message of peaceful protest was lost on the government as policemen placed barricades to stop the rally, and proceeded to push the farmers back by employing methods of mob dispersal. 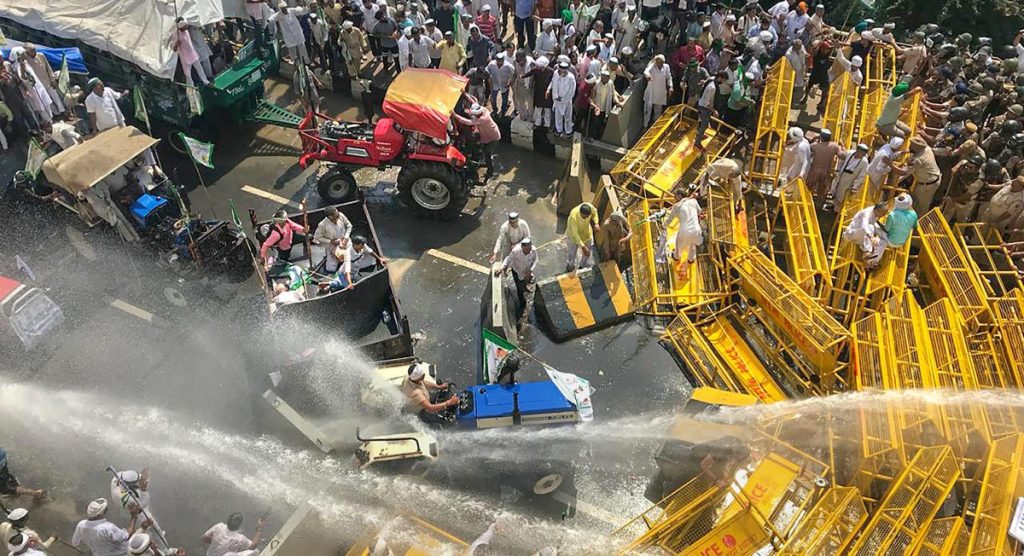 Several policemen were also injured in the ensuing violence as the protesters refused to go back. The farmers have so far rejected the government’s assurances that it will look into their demands.

While the opposition blamed the Narendra Modi government for what they called “brutal police action” against farmers on the way to Rajghat on Gandhi Jayanti for a peaceful protest, the police said it used “minimal force” to disperse the crowd and to maintain law and order in the national capital.

The protesters, many of whom have come from over 200 kilometres away after a week-long march, appear to be ready to stay put at the border with hundreds of tractors and trolleys with food, water, mattresses and even generators parked alongside the roads. 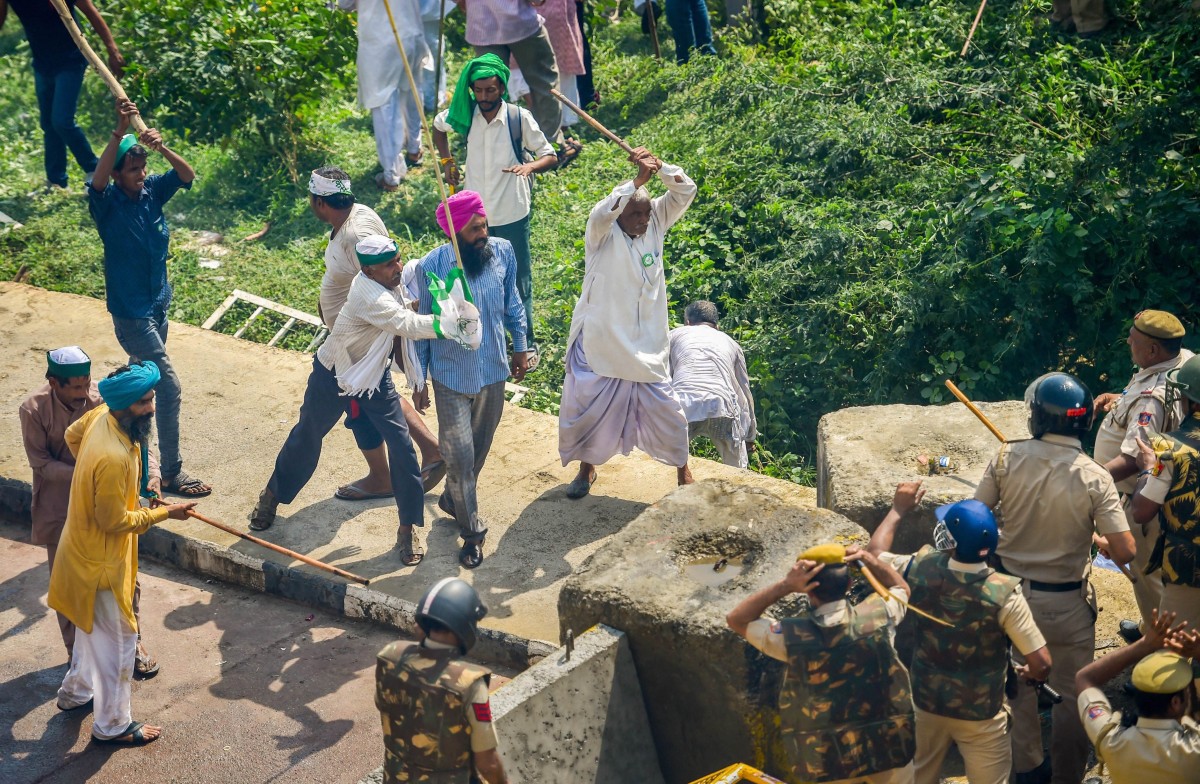 The protesters, which included women and elderly men as well, tried jumping thd barricades from time to time, prompting the police to use water cannons and tear-gas shells, and kept raising slogans against the government and the prime minister.

The Delhi police deployed over 3,000 personnel to stop the protesters from crossing the border.

As leaders from opposition parties accused the government of adopting an “anti-farmer” stand by stopping the protesters, the Central government went into a huddle to find out ways and an emergency meeting was called under chairmanship of home minister Rajnath Singh. 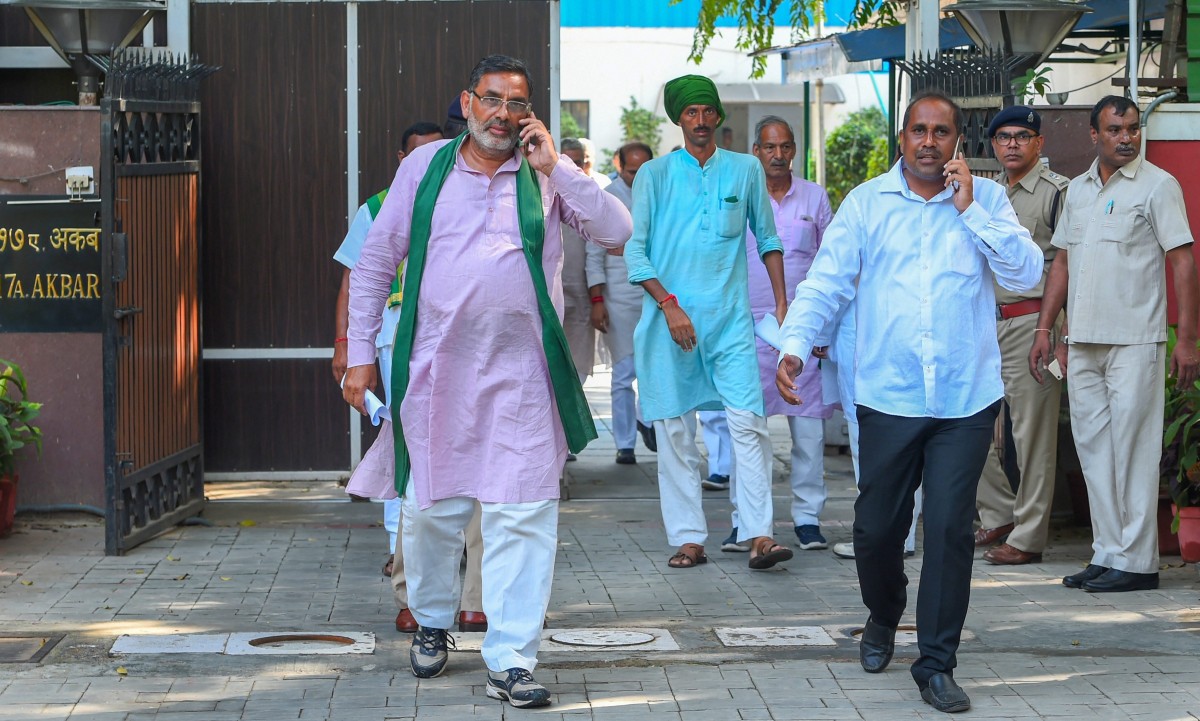 Farmers under the banner of Bharatiya Kisan Union leave after a meeting with home minister Rajnath Singh at his residence in New Delhi on October 2, 2018. Credit: PTI/Shahbaz Khan

The Centre assured farmers that it would fix the minimum support prices (MSP) of rabi (winter-sown) crops like wheat at least 1.5 times of the production cost. It would also try to restrict imports of agri items that are produced abundant in the country.

Shekhawat said a committee of chief ministers will also look into the farmers’ demand, as he sought to assure the protesters that the government will take forward their cause. 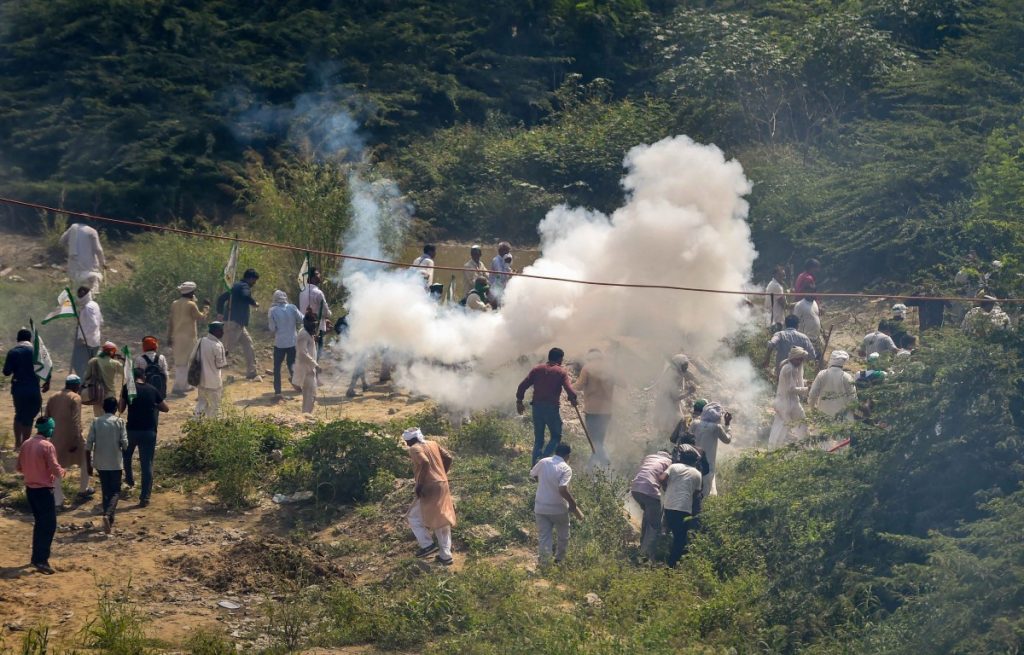 “Representatives of farmers along with ministers of the UP government Laxmi Narayan and Suresh Rana held discussions on a range of issues at Rajnath Singh’s residence. After that a consent was reached on some issues. The government has agreed to some of your demands,” Shekhawat said.

The minister said he has been associated with farmers’ issues and he could say with “certainty” on Lal Bahadur Shastri’s birth anniversary that there have been only a few successful agitations like this in the past. 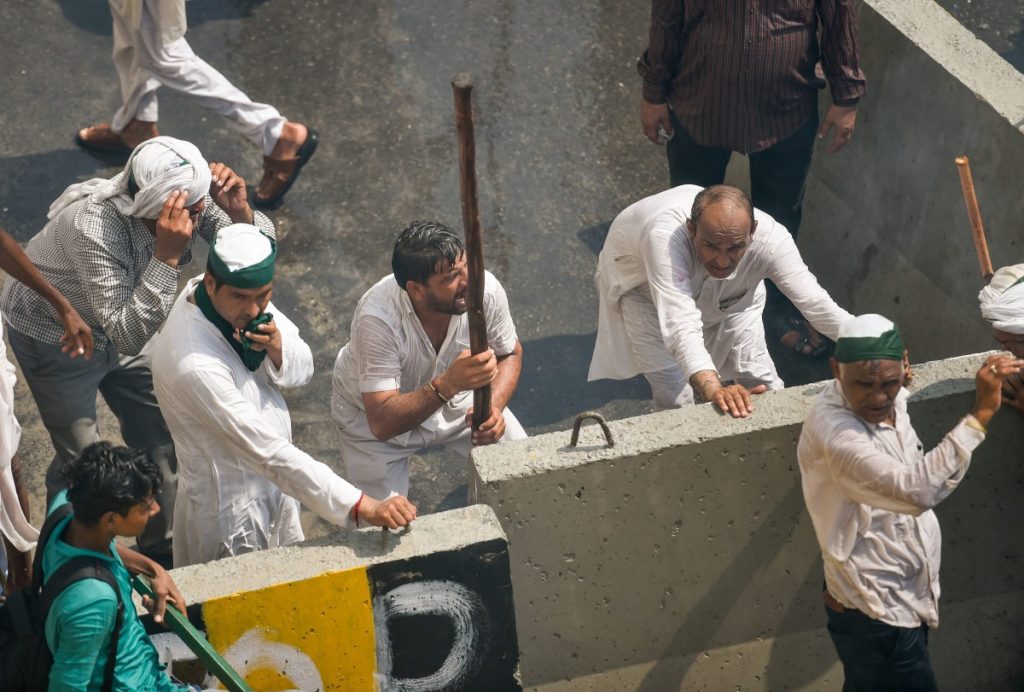 Farmers try to break through a police barricade in New Delhi on October 2, 2018. Credit: PTI/Ravi Choudhary

Bharatiya Kisan Union chief Naresh Tikait, however, sad the farmers are “not satisfied” with the government’s assurance.

“This has not been a good decision. All important demands have not been accepted and we are not satisfied with this assurance,” he said.

The farmer leader, whose father Mahendra Singh Tikait had led a massive farmers’ rally in the national capital about three decades ago, said sufficient talks have not been held so far on key issues faced by farmers even as the government has given assurances on some demands.

“We are sitting here as of now and this only is our next step,” he said.